- Local analysts divided on RBNZ but a cut would weigh on NZD.

The New Zealand Dollar was in recovery mode early in the Wednesday session as investors shrugged off a poor third-quarter jobs report but the nascent upturn could be scuppered next week if the Reserve Bank of New Zealand (RBNZ) responds to the report with an interest rate cut.

New Zealand's Dollar was in recovery mode and Pound Sterling in retreat, leading the Pound-to-Kiwi rate lower during the morning session Wednesday, with the British unit weighed down by election uncertainty while the antipodean currencies are supported by an ebbing of tensions between the U.S. and China. That's resulted in progress toward a ceasefire in the trade war but it remains to be seen if this pattern will remain in play for much longer.

Employment grew by 0.2% in the third quarter, down from 0.8% previously, which helped push the unemployment rate up from 3.9% to 4.2%. Markets anticipated a softening in growth but were looking for the jobless rate to peak at 4.1% so the figures were a disappointment for investors. The earlier rate had marked an eleven year low for Kiwi unemployment and led the RBNZ to conclude the economy reached 'full employment' in the third-quarter so the increase is unlikely to be welcomed by the central bank even if market disappointment was tempered by a decline in the 'underutilisation rate'.

"Stepping back a little, it appears that the unemployment rate has flattened off over the last year or so, rather than rising as we expected, as the wider economy has slowed. Jobs growth has softened, as demonstrated by both the Household Labour Force Survey (HLFS) and the Quarterly Employment Survey (QES). But this has been offset by a drop in labour force participation, particularly among the older age groups as they choose early retirement," says Michael Gordon, an economist at Westpac. 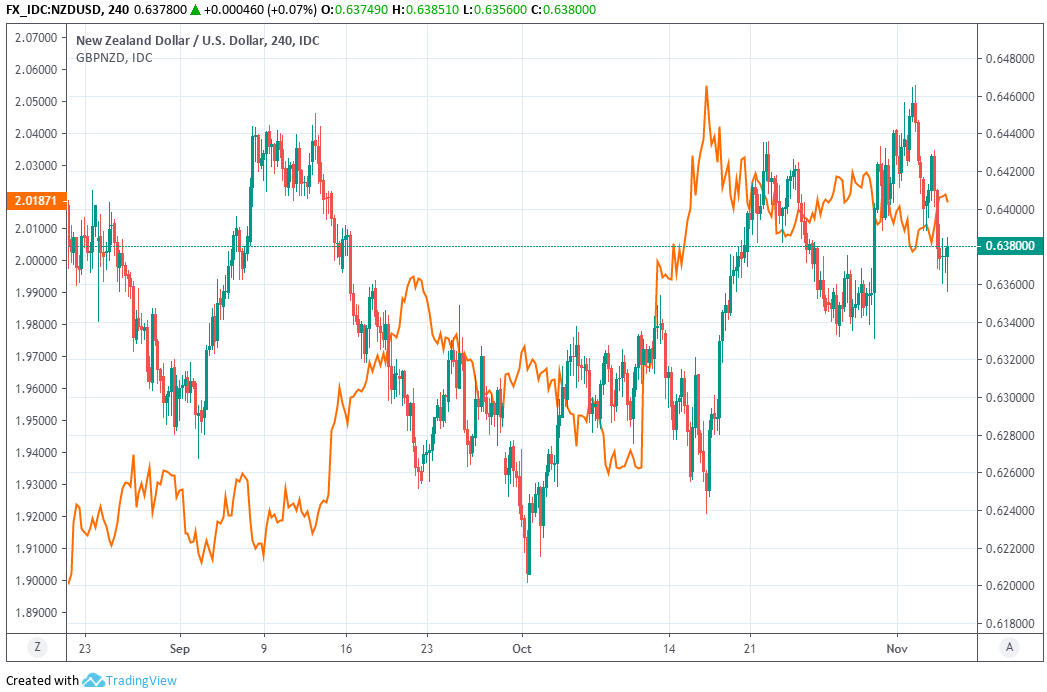 Stats NZ said Tuesday that Kiwis who're already employed, but in need of more work, succeeded in their endeavour. That helped drive the decline in the 'underutilisation' rate and is for the economic outlook because if anything, it will mean more consumer spending up ahead.

Westpac's says the figures should mean the RBNZ leaves its cash rate unchanged at 1% next Wednesday, which would be positive for the New Zealand Dollar, although other analysts are still forecasting a fourth 2019 rate cut from the Kiwi central bank. And there are a number of reasons why policymakers might feel compelled to take action, which would hurt the currency because financial markets are unprepared for another cut.

"The employment data confirmed that below trend New Zealand GDP growth has increased spare capacity in the labour market.  Our ASB colleagues think the RBNZ will cut interest rates further in order to continue to meet its labour market objectives.  ASB expect the RBNZ to cut the cash rate by 25bps on 13 November and again in February 2020.  OIS markets are now pricing a 68% chance of a 25bp rate cut next week, compared to a 56% chance yesterday," says Kim Mundy, a strategist at Commonwealth Bank of Australia. 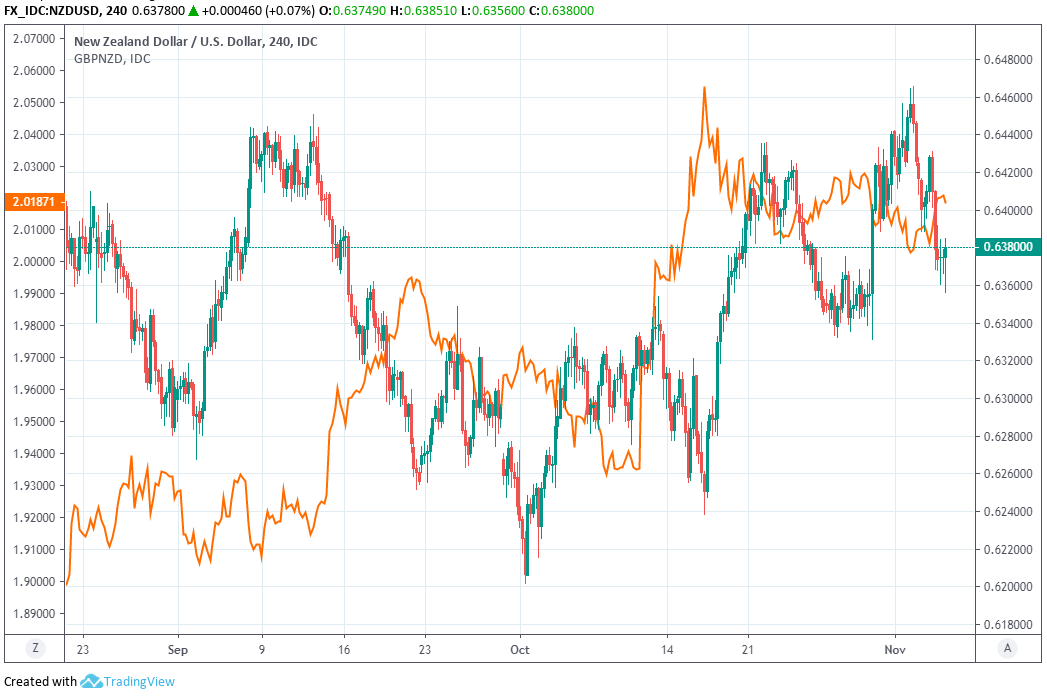 Kiwi policymakers need the economy growing at an 'above trend' pace and the jobs market to be firing on all cylinders if it's to deliver the inflation that it's obliged to. Kiwi inflation has been below the midpoint of the 1%-to-3% target for years now and the economy has slowed in the last 18 months or more, which could mean it's even more unlikely the RBNZ will get the price growth it needs without aiding the domestic economy.

"We expect the RBNZ to cut the OCR 25bps next week at the November MPS and signal that further cuts remain a possibility should the dataflow and outlook warrant – we expect it will, in time. We continue to expect further rate cuts in February and May next year, aimed at preventing inflation and inflation expectations from slipping further. This would take the OCR to a new record low of 0.25%," says Sharon Zollner, chief economist at Australia & New Zealand Banking Group (ANZ).

The RBNZ said in August and September, after the jobless rate had fallen to its earlier 3.9% level, that Kiwi employment had reached its "maximum sustainable level" before committing in both months to using interest rate policy in order to keep maintain that status quo. That commitment by the RBNZ is in line with the new mandate it has been operating under since April 01.

The new mandate, a product of the Labour Party and New Zealand First coalition government, saw the bank become obligated to use interest policy to "support maximum sustainable employment" in addition to keeping inflation "near the 2 percent mid-point" of the target range. ANZ, one of New Zealand's largest banks, says this and other factors mean the RBNZ will cut the cash rate next week and on two more occasions before long.

"The New Zealand economy is experiencing slipping growth, not a sudden tilt into recession. Nonetheless GDP growth has halved, from 4.1% in 2016 to 2.1% at the last read (Q2). It is difficult to know what to make of such a slow slide," Zollner writes, in a note to ANZ clients Tuesday. "If you don’t have much ammo, come out firing’ has been the approach thus far, and we are assuming they’ll stick to the general principle of it being better to risk overdoing it than miss the boat. It’s a long time until the next rate-cut opportunity in February." 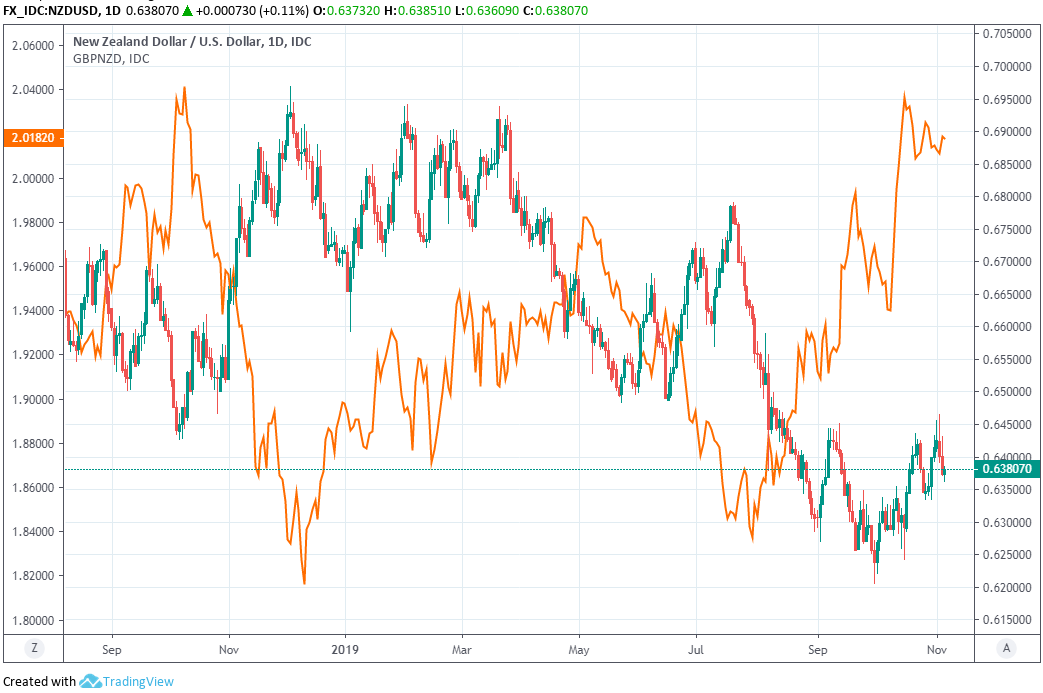 Central bankers rarely react to individual economic data points that relate to one single period alone, instead preferring to take their cues from broader trends, but failure to cut the cash rate again on November 13 might risk leaving it open to accusations of having failed to deliver under the new mandate. Such a decision certainly wouldn't do much positive for the RBNZ's relations with government, given the outlook for global growth and the New Zealand economy's close relationship with a struggling China.

A rising jobless rate is a problem for the Kiwi because it's been caught up in a recent market trend that's seen investors betting that central banks the world over will now sit on their hands for at least a few months before cutting rates again. Pricing in the overnight-index-swap market had implied immediately after the last cut, a November 13 cash rate of just 0.80% - below the current 1% rate - but by Tuesday that number had risen near to 0.90%.

The market-implied Kiwi cash rate for November 13 had fallen back to 0.84% by Wednesday morning but was still above the 0.75% that will prevail if the RBNZ announces another cut, which means there could still be some downside left tp lay out in New Zealand Dollar exchange rates over the next week.

"While market sentiment has recently lifted significantly on reduced geopolitical uncertainty, the global growth outlook has worsened," Zollner says. "The current positive vibe in global markets is yet to prove its sustainability. If it persists and transmits to a better mood here in New Zealand, the OCR’s march to the bottom may take a little longer than we are currently forecasting...But with the data out of our biggest export partners China and Australia continuing to disappoint significantly, and credit conditions for much of the economy tightening and set to continue to do so, a rock-bottom OCR is surely just a matter of time."

Zollner and the ANZ team forecast the RBNZ will cut the cash rate all the way to 0.25% next year and have even warned the bank could be forced to resort to quantitative easing if economy and inflation outlook takes another knock between now and when the cash rate hits 0.25%. November 11, 2020, marks the final RBNZ decision of next year and pricing in the OIS market implied on Tuesday a cash rate of 0.70% by that time.

In other words investors are completely unprepared for the level of cuts anticipated by ANZ, which will be bad news for the New Zealand Dollar if markets begin to come around to the ANZ view in the weeks or months ahead.