- More upside possible above May highs

The GBP/NZD exchange rate is trading at around 1.9936 after rising 2.21% in the week before. Studies of the charts suggest the pair may be forming a bullish continuation pattern with more upside expected in the near-term.

Be aware that Sterling will remain volatile this week as Brexit negotiations with the EU reach their day of reckoning: by Thursday we will know if the EU and UK are able to strike a revised deal. This deal should then be put before the House of Commons on Saturday.

If the deal should fail at either of these two stages Sterling will be at risk of declines against the New Zealand Dollar. However, the successful passing of a deal opens up Sterling to further gains, which will likely reinforce the GBP/NZD rate's technical uptrend.

The 4 hour chart - used to determine the short-term outlook, which includes the coming week or next 5 days - shows how the pair suddenly surged higher on October 10. 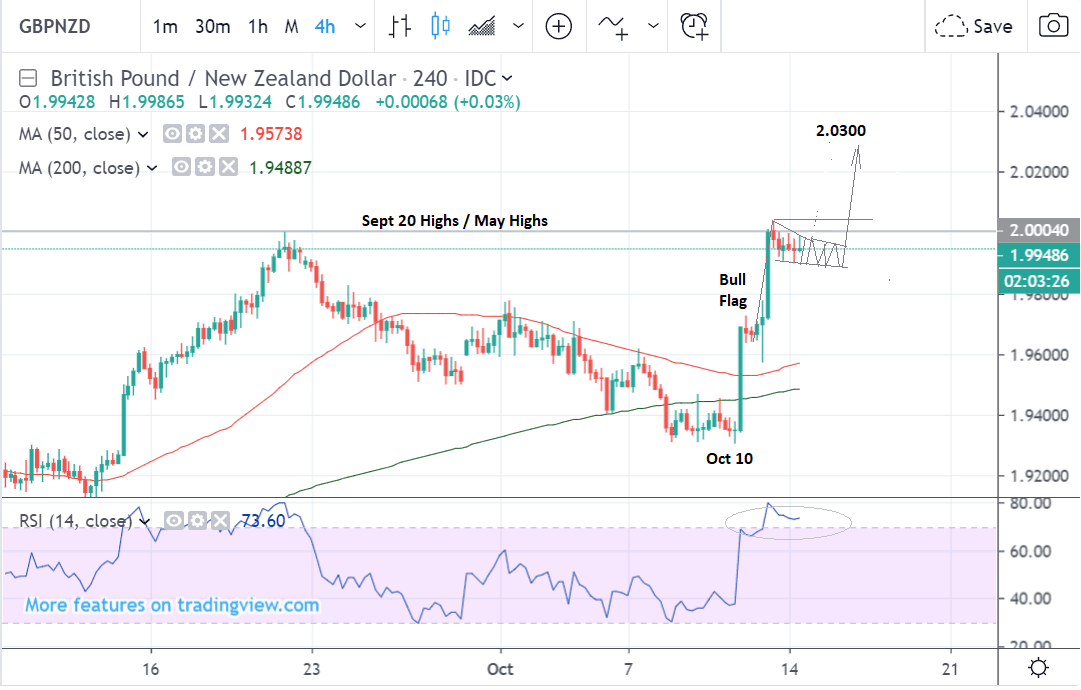 The sharp rally strongly suggests the prior period of weakness following the September 20 peak was just a correction.

This could mean the former uptrend is now also in the process of resuming.

The pair is probably in the process of forming a bullish flag pattern which indicates the likelihood or more upside on the horizon.

A bull flag consists of a sharp rally called the pole and then a sideways phase which is the flag 'square', it precedes a breakout higher and extension of an equal length to the pole higher.

Using the flag to guide, a break above the 2.0036 highs would probably lead to an extension higher to a target at 2.0300.

The RSI momentum indicator in the bottom panel is in the overbought zone which indicates the pair may pull-back or trade sideways a little before resuming its uptrend.

The daily chart shows the pair seemingly resuming its prior uptrend over the last few days since the turnaround at the October 10 lows. 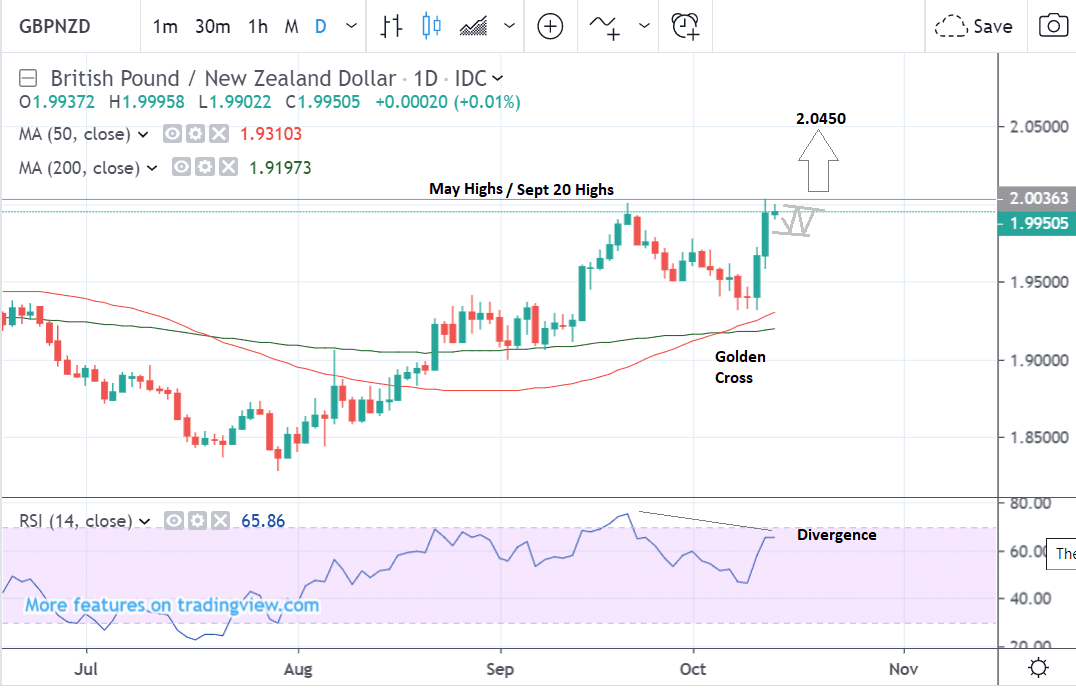 GBP/NZD has now bumped up against a ceiling from the May and September highs at 2.0000 and it is possible the pair may begin to trade sideways or pull-back before rising any higher.

This view is supported by the RSI momentum indicator which is diverging bearishly with the exchange rate. Although price recently matched the former Sept 20 high; momentum didn’t, setting up a divergence, which is a bearish sign.

This increases the chances of a pull-back before the next break higher.

Confirmation for further upside would come from a clear break above the September and May highs, confirmed by a break above 2.0075.

The weekly chart shows a similar picture as the daily chart - the pair will probably break above the May highs and rise up to a target at 2.0450 and the October highs. 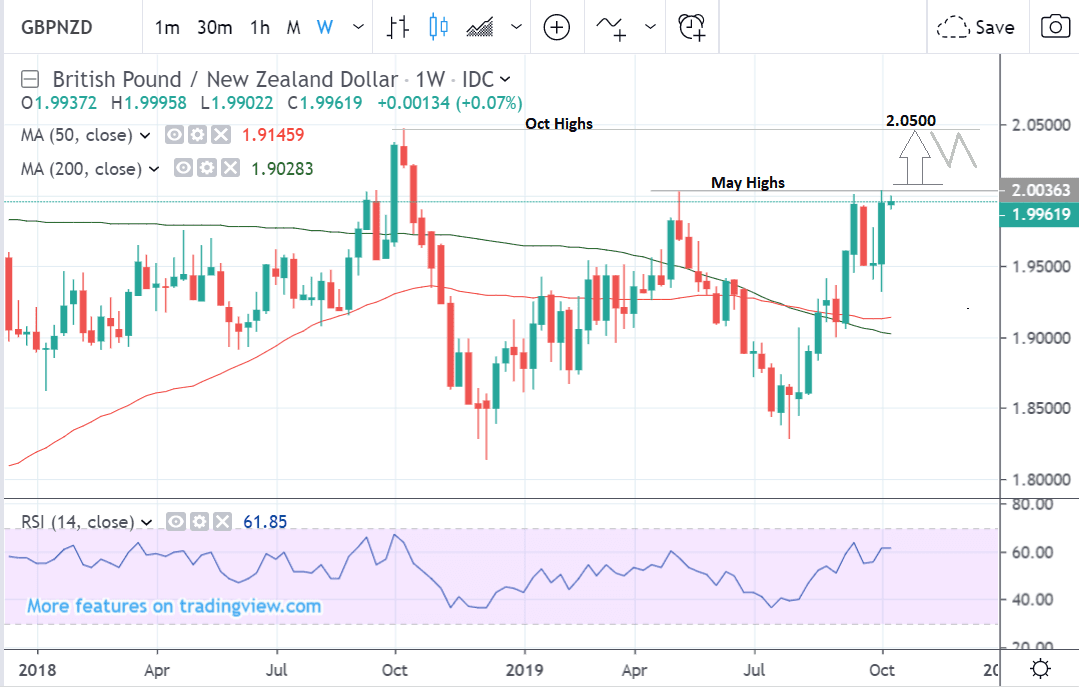 After that, there is a heightened risk the pair will pull-back and consolidate over the longer-term period, with declines back down to the very key 2.000 level possibly envisaged.

The main releases of note for the New Zealand Dollar in the week ahead are inflation data on Tuesday and Chinese growth data out at the end of the week.

Inflation data is the major domestic release in the coming week. It is forecast to show only a 1.4% rise in Q3 compared to a year ago, from 1.7% in Q2. The data is published on Tuesday at 22.45 BST.

Low inflation fits with the pervasive outlook for ‘slower growth’ and if the data is lower-than-expected it could weaken the Kiwi. A stronger-than-expected inflation print would however be positive for the NZ Dollar as this would give the Reserve Bank of New Zealand reason to question whether further interest rate rises are warranted. Central banks tend to raise interest rates in times of rising inflation, and lower them in times of fading inflation. And, the general rule-of-thumb is that rising interest rates are positive for a currency, while falling rates are negative.

In short, inflation is a key consideration for a currency's outlook.

"The main event this week will be Q3 CPI on Wednesday. We’re expecting annual CPI inflation to dip to 1.5%, with non-tradable inflation holding up. This is actually a little stronger than the RBNZ’s latest forecast. However, the outlook is what matters, and the trifecta of slowing growth, waning capacity pressures, and slipping inflation expectations means that inflation is unlikely to surprise on the upside for long," says Sharon Zollner, Chief Economist at ANZ.

Markets are already pessimistic about long-term growth in New Zealand, leaving a high bar for more negative news to be priced into the unit, according to BNZ Bank because longer-term interest rates are so low.

“Present levels of long-term interest rates embed a relatively pessimistic economic outlook, leaving the market vulnerable to positive news (such as on US-China trade and Brexit, and the possibility that this could trigger an upturn in the global data pulse),” says a client briefing from BNZ.

The New Zealand Dollar could also be impacted by Chinese growth data for Q3 out on Friday, which is forecast to show GDP rise 6.1% year-on-year in Q3 compared to a year ago, when released at 3.00.

This would represent a slowdown from the 6.2% of the previous quarter. Any deeper contraction would raise concerns about the Chinese economy which would probably drag the Kiwi down as well since China is NZ’s largest trading partner.

The data will, however, be viewed in a more benign light as a result of the trade detente agreed by the U.S. and China last week.

This saw the U.S. hold back from imposing higher tariffs on $250bn of Chinese imports in exchange for China lifting a ban on importing U.S. agricultural products.

The trade deal is not yet sealed and signed, however, and the Kiwi is losing ground versus the U.S. Dollar at the time of writing due to reports signatories may be having second thoughts.