- More upside expected amid new uptrend, to target at 2.000.

- GBP to be driven by Brexit as NZD looks to Q2 GDP data.

The Pound-to-New-Zealand-Dollar rate was trading around 1.9533 at the start of the new week after closing the previous one 2.47% higher on Friday, although studies of the charts suggest the pair is set to continue rising after having established a new short-term uptrend.

The 4 hour chart, used to determine the short-term outlook over the coming week, shows how the pair has broken out of the sideways range or triangle pattern that saw it trading between 1.90 and 1.94 ever since mid-to-late August.

This breakout is likely to extend higher to an initial upside target at 1.9660, followed by 1.9800. A break above the 1.9620 highs would confirm a further move to the upside. The pair is currently pulling back down to support, from resistance at the top of the new range around the 1.9500 level, but should resume its uptrend eventually. 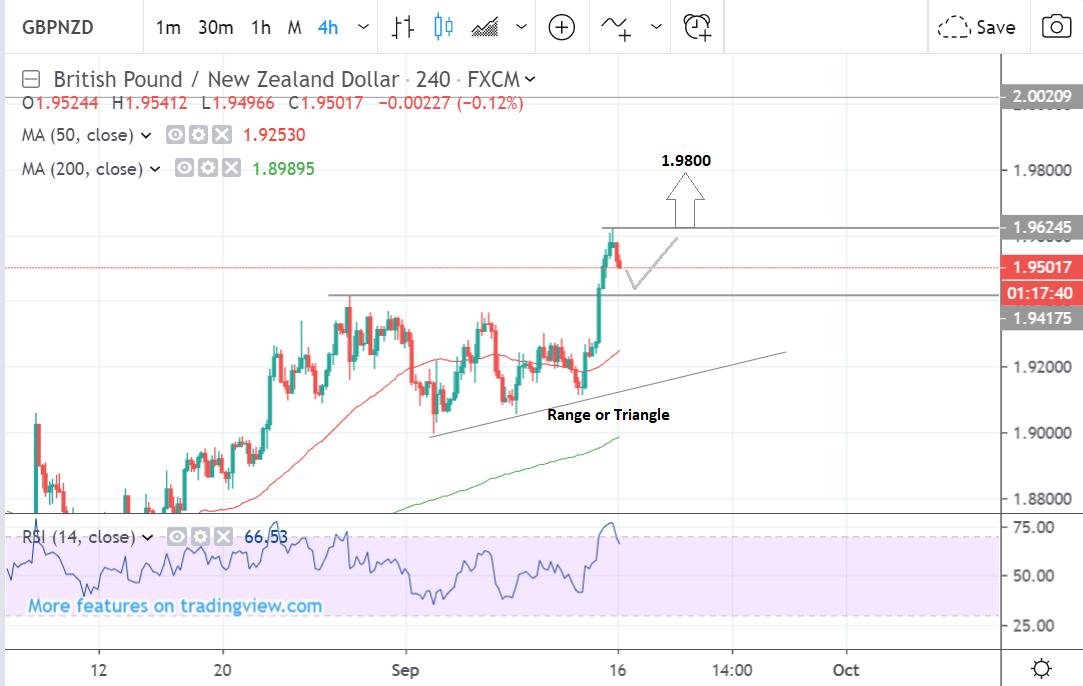 The daily chart shows how the pair is probably rising in a ‘measured move’ price pattern after bouncing off support from a major trendline. The c-d wave of the pattern is currently unfolding and likely to extend higher to a target at around 2.000 and the May highs.

A break above the 1.9620 highs would probably confirm a continuation higher; a further break above 1.9800 would likely green-light the final tranche up to 2.0000. The daily chart provides a view of the medium-term outlook which includes the next week to month. 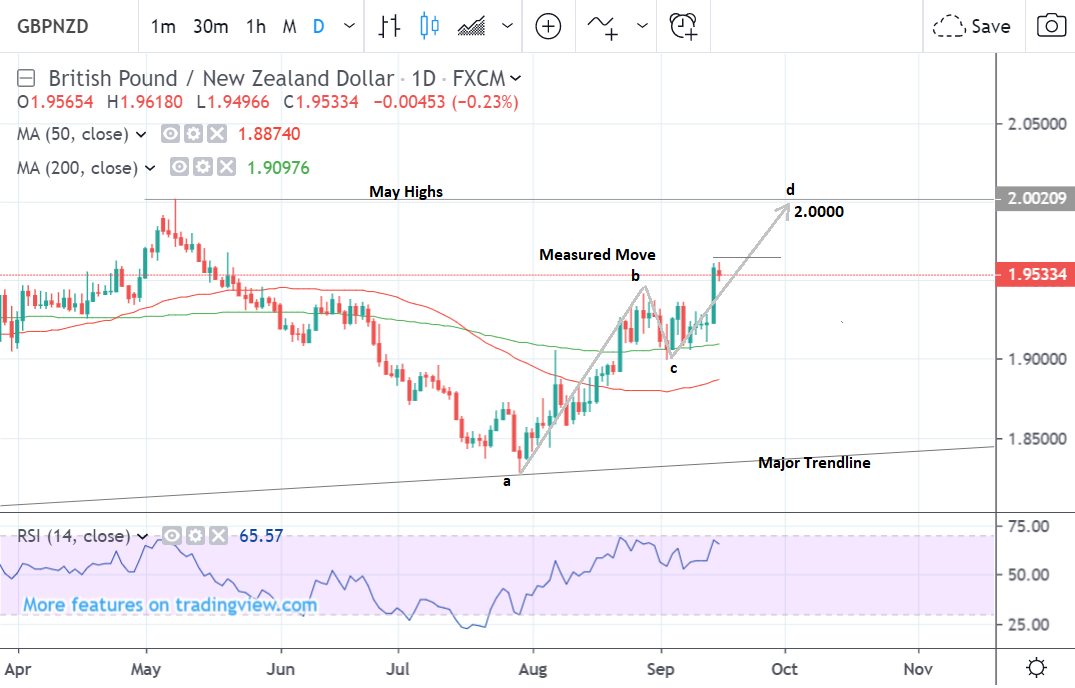 The weekly chart shows how the pair has rebounded after finding support on a major trendline - it has broken above the 50 and 200 week MAs and is likely to continue rising up to a target at 2.000 and the May highs.

After touching the May highs, the exchange rate will probably pull back down and possibly consolidate in a sideways range for a while before unfolding in its next directional move higher or lower. 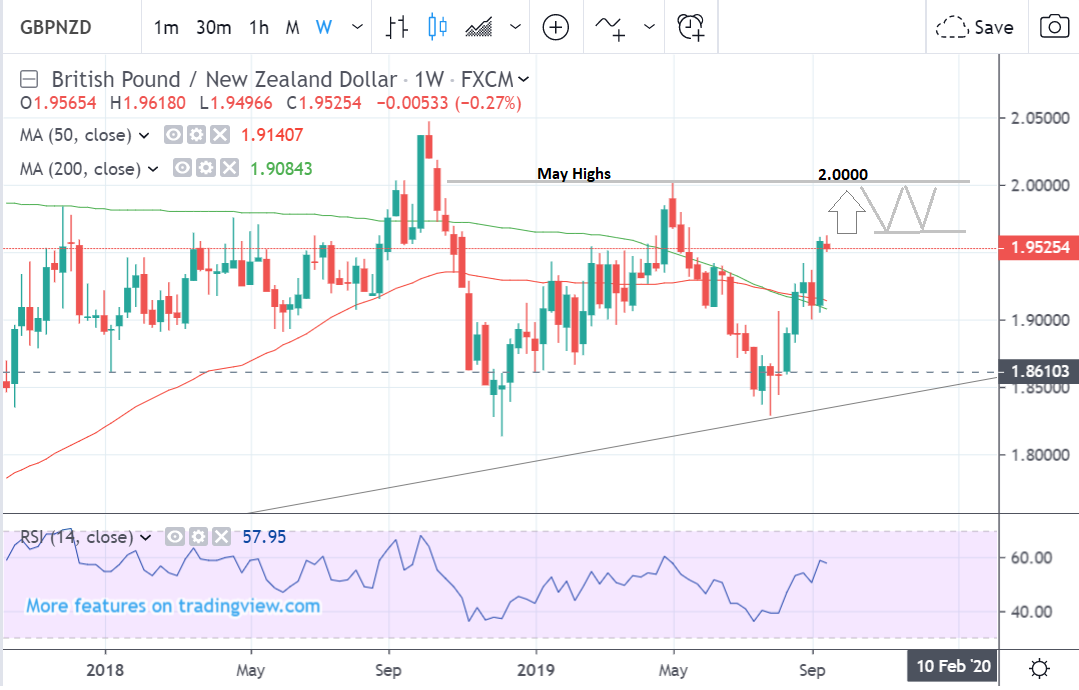 The main fundamental factors driving the New Zealand Dollar (Kiwi) in the week ahead are second-quarter GDP data, the price of oil and global risk appetites.

New Zealand's economy is expected to have grown 0.4% in the second quarter, marking a slowdown from the 0.6% growth of the previous quarter and in line with the steadily declining trend. The data is out at 23.45 BST on Wednesday. The result may affect expectations for Reserve Bank of New Zealand (RBNZ) interest rate policy.

“A solid GDP print in New Zealand would make it less likely that the Reserve Bank of New Zealand will ease policy again in its remaining two meetings of 2019,” says Raffi Boyadijian, an analyst at forex broker XM.com. 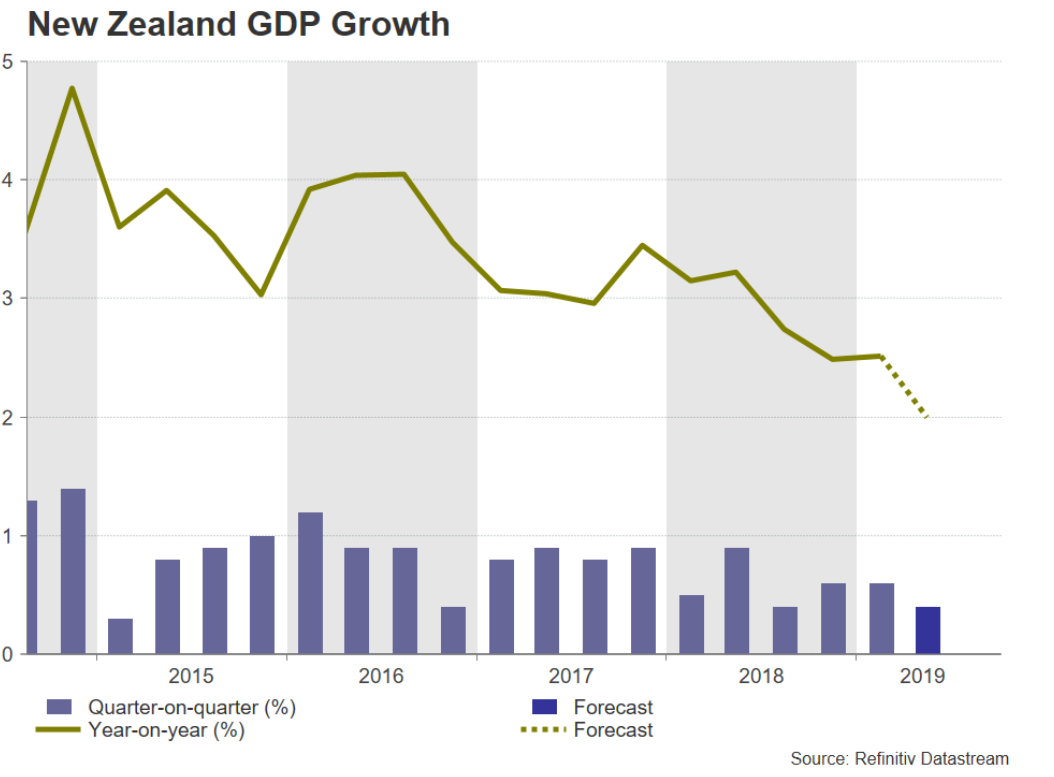 Oil prices may also impact on the Kiwi after a drone strike on a Saudi oilfield knocked out about half the country’s supply, which could weigh on the risk-sensitive Kiwi and offset a recent easing of concern about the U.S.-China trade war. Trade fears have eased after signs China and the U.S. are edging closer to a lasting trade detente.

“In currency markets, the yuan was stronger, with USD/CNY down 0.5% to 7.0795, with further evidence of goodwill on US-China trade relations,” says Jason Wong, an analyst at BNZ. “On Friday, China’s Ministry of Commerce said that it was encouraging companies to buy US farm products including soybeans and pork and will exclude those commodities from additional tariffs. This followed the announcement earlier in the week of tariff exemptions for other products including pharmaceuticals and lubricant oil and the US delaying some planned tariffs from 1 October to 15 October.”