- New Zealand Dollar to be moved by China-U.S. trade negotiations

The GBP/NZD exchange rate is trading at around 1.9289 after rising a sizeable 0.80% on Tuesday, and studies of the charts suggest the pair has probably reversed its medium-term downtrend and started a new uptrend which is likely to continue rising.

The advance comes amidst soft global market conditions; the kind that typically hurt the New Zealand Dollar which is positively correlated to rising stock markets and commodity prices. Sterling is meanwhile the top-performer of the day as the Brexit pendulum once again starts to swing away from a 'no deal' Brexit on October 31.

"Sterling trading higher again today," says Neil Jones, a trader at Mizuho Bank, "I suggest on reports indicating the opposition will look to form a plan into law starting today, to stop a no deal on the 31st October or rather deal A50. The sense is in the market, the measure would be more likely to succeed rather than a vote of no confidence to topple Boris Johnson."

The gains dovetail with our latest technical analysis which suggests further strength is possible. The 4-hour chart - used to determine the short-term outlook, which includes the coming week or next 5 days - shows the pair having risen steadily since the July 30 lows. 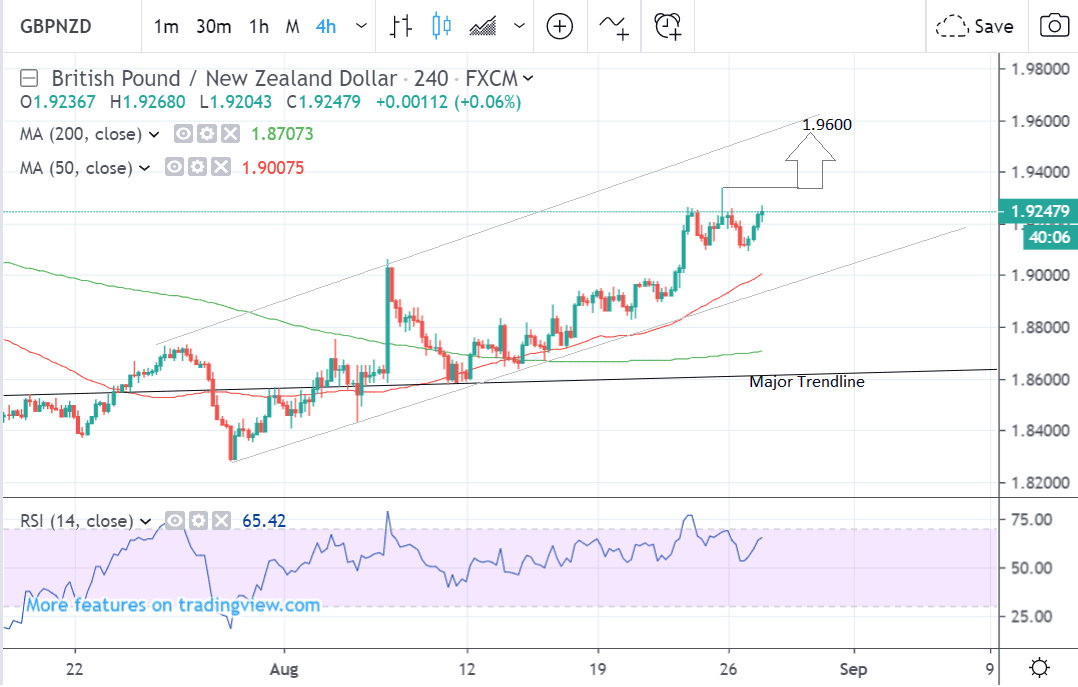 A break above the 1.9340 highs would probably reaffirm the uptrend and suggest a continuation up to a target at 1.9600.

The daily chart shows how the pair has risen above both the 50 and 200-day moving averages (MA) confirming the uptrend. 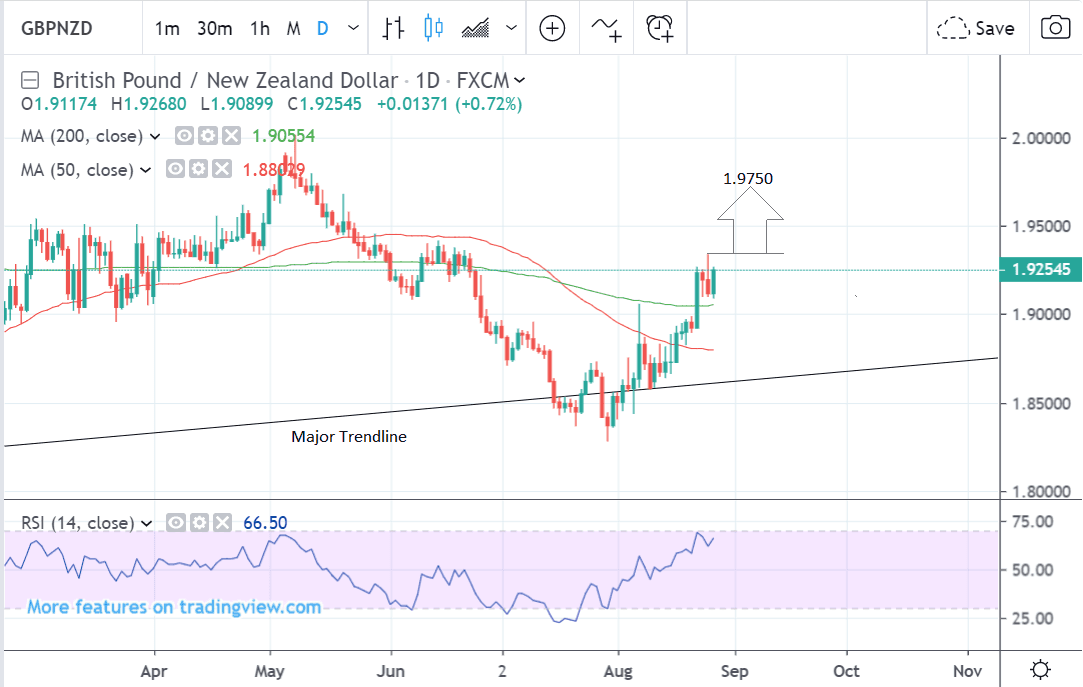 The RSI momentum indicator in the lower pane is corroborating the bullish bias by rising steeply in tandem with the exchange rate.

The daily chart provides a view of the medium-term outlook which includes the next week to month ahead.

The weekly chart shows how the pair has rebounded after basing on a major trendline. It is now in its third up-week and likely to continue. 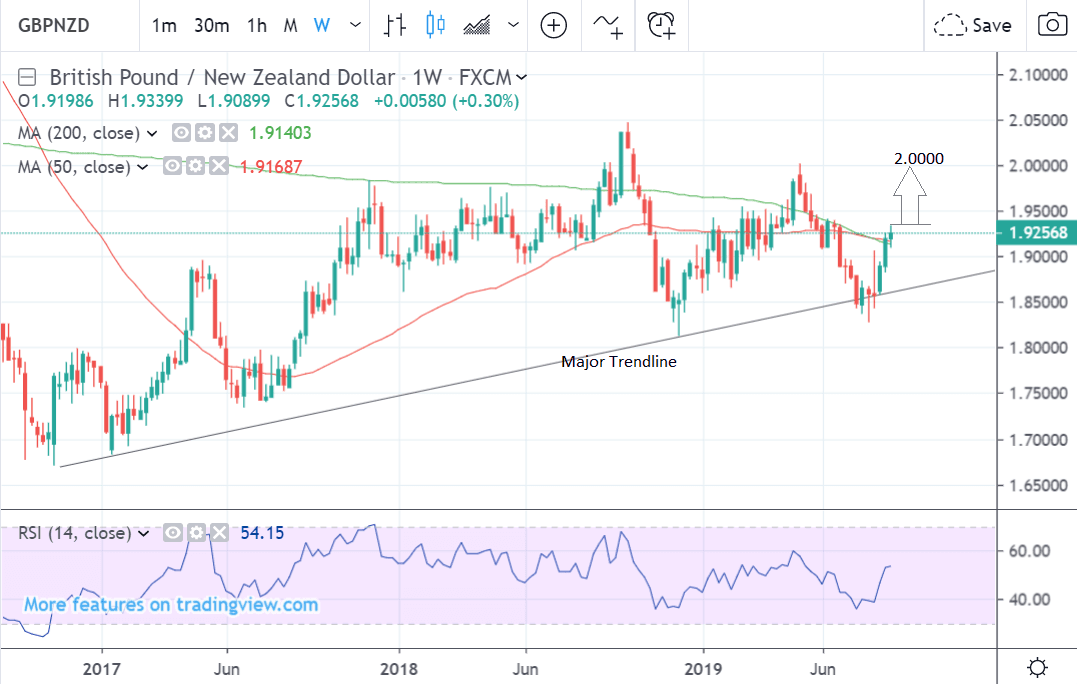 It has risen above the 50 and 200 week MAs which is a strong bullish sign.

It will now probably continue higher to a long-term upside target at 2.000 and the May highs.

The main factor driving the New Zealand Dollar in the week ahead is likely to be how the trade war between Beijing and Washington evolves.

The Kiwi is especially sensitive to the outlook for the Chinese economy so if trade tensions worsen it will probably impact negatively on NZD.

Last week trade tensions ratcheted up after both China and U.S. threatened to increase tariffs on each other's products.

Although president Trump later suggested the two sides were working things out his comments were later disputed by sources in China who suggested he was over-exaggerating the significance of what had been purely technical calls between negotiators.

There is a risk that things could get even worse over the short-term horizon and this will weigh on the Kiwi.

One positive sign which could offset downside is the People’s Bank of China’s (Pboc) decision to make some accommodative changes to its interest rate policy.

This has essentially made borrowing for corporations and mortgage-holders cheaper. This should help support growth and is further confirmation the Chinese authorities’ willingness to step in and underpin its economy.

On the domestic front, the main focus will be on whether the RBNZ cuts rates in September. The Kiwi was supported last week after RBNZ Governor Adrian Orr said he was “pleased” with where interest rates were, dampening expectations of another rate cut in September.

On the data front, ANZ business confidence in August will be out at 2.00 BST on Thursday, and building consents in July will be out at 23.45 on the same day, though neither are expected to be market moving.