- But HSBC sees NZD/USD falling to four-year lows before 2019 is over.

- Forecasts Pound-to-Kiwi rate will rise a staggering 14.5% by December.

The New Zealand Dollar rose sharply against the U.S. Dollar, Pound Sterling and Japanese Yen Thursday after the Federal Reserve admitted it might cut American interest rates before the year is out, but analysts at HSBC say steep losses are lurking just around the corner for the Kiwi currency.

America's Dollar slumped across the board Thursday in response to the latest monetary policy guidance from the Federal Reserve, which strongly suggested the central bank could cut its interest rate over the coming months, vindicating some analysts for having bet against the U.S. greenback.

This enabled the Kiwi Dollar to rise against its U.S. counterpart during morning trading, although the antipodean unit also advanced against a Pound Sterling that lagged all of its developed world rivals other than the once-mighty greenback during the session. 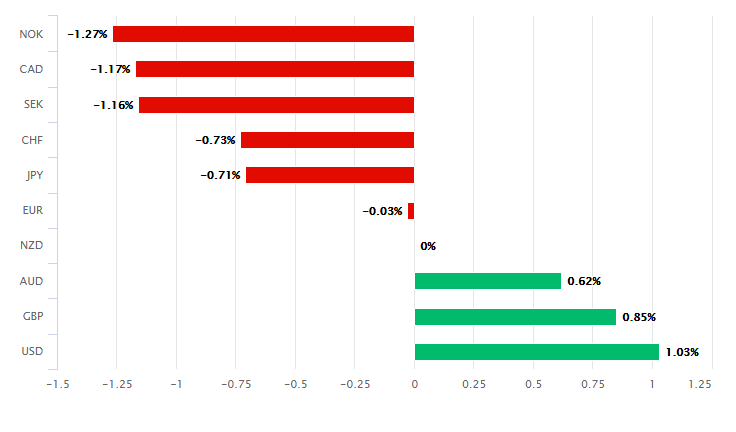 New Zealand's Dollar was aided in its upward climb by GDP growth data that showed the economy continuing to expand during the first-quarter, at the same pace it did in the final months of 2018. GDP grew by 0.6% in both quarters, in line with market expectations.

Construction and mining activity were the main drivers of growth in the New Year while growth in the all-important services industry softened to just 0.2% and output from the primary production industries continued to fall, declining 0.7% last quarter.

The details suggest activity is softening in New Zealand's most important industries and this is after the headline number showed the economy growing at the same reduced quarterly pace seen in late 2018, when other advanced economies like that of the U.S., UK and even the Eurozone all saw a pickup in the three months to end of March.

"Given the soft NZ Q1 GDP details, ongoing subdued NZ business confidence and the deterioration in global economic conditions another rate cut by the RBNZ is likely.  Our ASB colleagues expect the RBNZ to cut the cash rate by 25bp to 1.25% in August," Mundy warns.

The Reserve Bank of New Zealand (RBNZ) cut its cash rate to a record low of 1.5% in May, citing below-target inflation and a souring economic outlook that dashed hopes of  seeing inflation rise above the midpoint of the 1%-to-3% target. 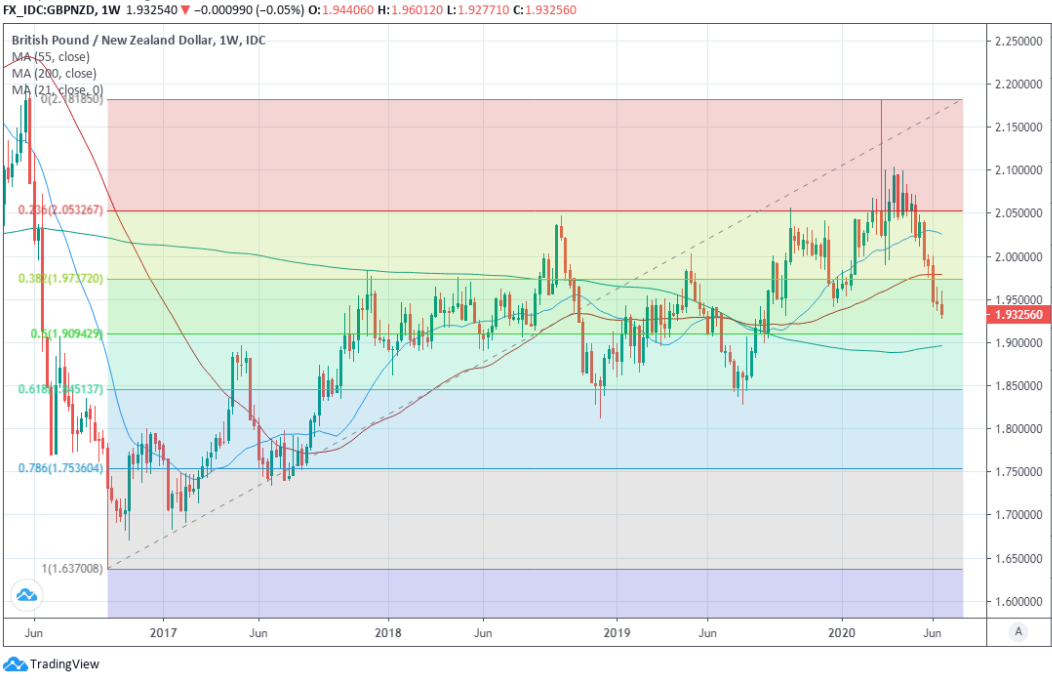 New Zealand's Dollar is forecast by HSBC, one of the world's largest banks and a significant foreign exchange dealer, to fall to a four-year low against its U.S. rival before the year is out while the Pound-to-Kiwi rate is expected to rise a staggering 14.5% before the curtain closes on 2019. 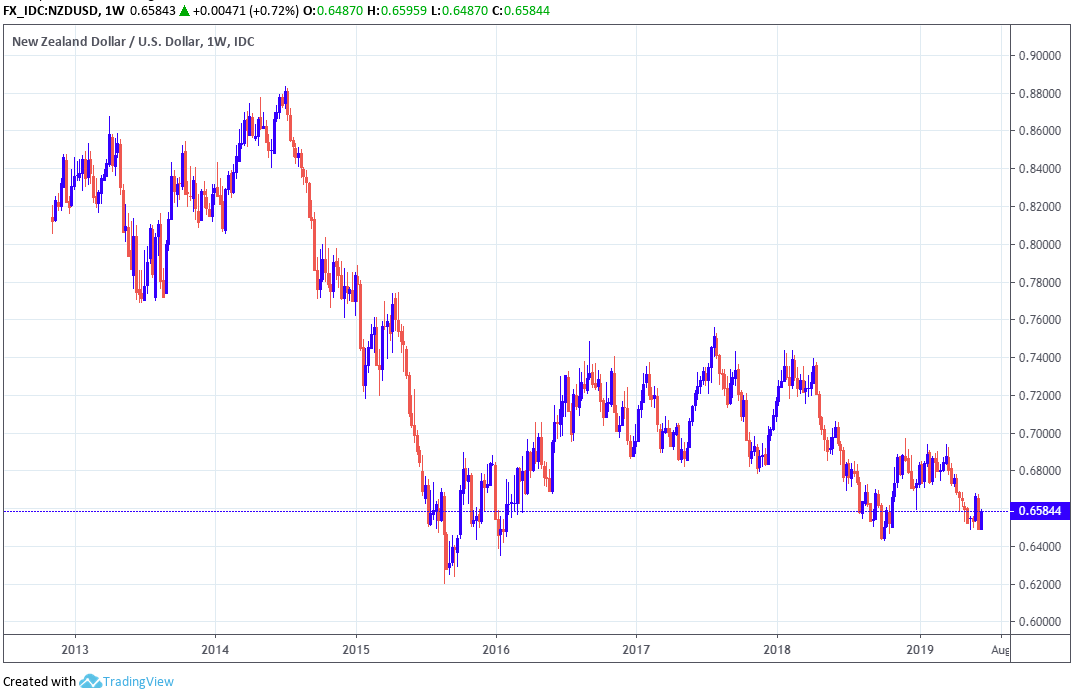 "AUD-USD and NZD-USD were dragged lower by relative interest rates for most of 2018 as a strong US economy allowed the Fed to deliver tightening while antipodean central banks watched on," says Dominic Bunning, a strategist at HSBC.

Wednesday's GDP growth figure was above the 0.4% forecast of the Reserve Bank for the opening quarter but this has done little to improve the outlook for the Kiwi because financial markets still see the RBNZ being forced to cut its interest rate again over the coming months.

Pricing in the overnight-index-swap market implied on Thursday that a further two RBNZ cuts to the cash rate are likely before the year is out. The market-implied cash rate for November 13, the date of the RBNZ's final meeting of the year, was just 1.07%. That's nearly two 25 basis point rate cuts below the new record low of 1.5%.

"The recent outsized declines in US interest rates have not been mirrored by a rise in the AUD or NZD with the sensitivity to interest rate differentials seemingly breaking down. We see good reasons why this can persist and why it does not signal that either currency is cheap," Bunning adds. 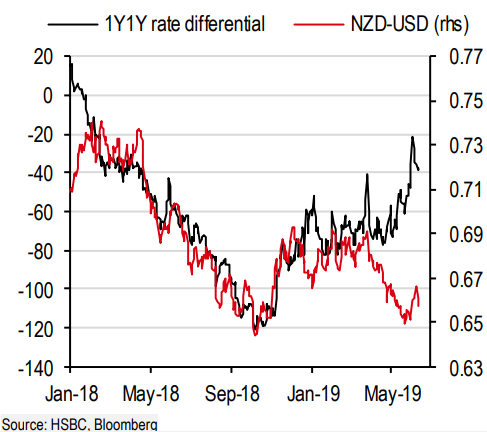 Above: Difference between NZ and U.S. forward rates, correlation with NZD/USD. Source: HSBC.

New Zealand's currency was hurt last year as the U.S. Federal Reserve raised its interest rate four times while investors bet the RBNZ would eventually reduce borrowing costs for Kiwis. U.S. interest rates went from being 0.25% lower than those in New Zealand to 0.75% higher last year.

But, even though the Fed is on the verge of cutting its own cash rate and yield-differentials in the bond market are less disadvantageous, the Kiwi currency is yet to meaningfully recover. HSBC's Bunning has an explanation for this.

"Interest rate differentials tend to be useful for FX as a proxy for the relative cyclical performance of each economy and their ability to capture capital inflows. However the global experience suggests that this behaviour changes as we approach the lower bound of effective interest rates," Bunning writes, in a note to HSBC clients. "The recent movement in rate differentials simply reflects that there is now much less room to price in further rate cuts locally relative to the US, rather than relative economic performance, which still appears to strongly favour the USD." 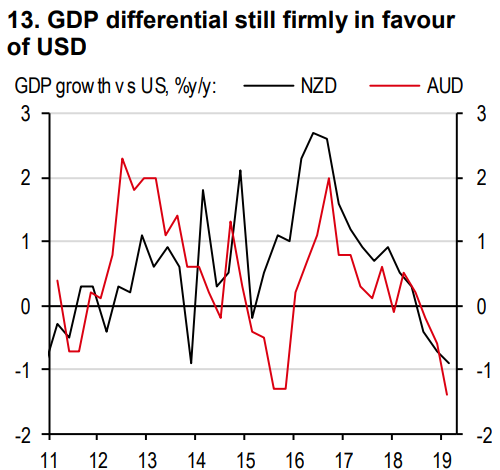 Above: Difference between NZ and U.S. growth, correlation with exchange rates. Source: HSBC.

Bunning says that bond yields, which represent real-time borrowing costs of sovereign governments, cannot fall much further from where they are in places like New Zealand and Australia. This is a problem for the RBNZ because those yields influence borrowing costs in the real economy and its real-economy rates that RBNZ policy seeks to push lower in order to stimulate faster economic growth and higher inflation.

"We have discussed before how with rates close to exhaustion, weaker currencies are likely to be required to provide more of the adjustment in the face of a global downturn. A year later this seems even more relevant for Australia and New Zealand and helps explain why AUD-USD and NZD-USD have not rallied in line with the recent outsized fall in USD rates."

Without a meaningful ability to stimulate growth by forcing borrowing costs lower, Bunning says the market would likely force the New Zealand Dollar to do the heavy lifting. A lower Kiwi Dollar would make New Zealand exports more attractive and could help the economy by discouraging imports, which are a subtraction in the calculation of GDP. It would also help lift inflation toward the RBNZ's elusive target by raising the price of any consumer goods that are still imported.

We think that the apparent disconnect between relative rates and FX is likely to persist and does not signal that either currency is cheap. We continue to look for further downside in these currencies into year-end," Bunning says. "Our year-end forecasts remain at 0.66 for AUD-USD and 0.62 for NZD-USD."

Bunning also forecasts the Pound-to-New-Zealand-Dollar rate will rise from 1.92 Thursday to 2.20 by year-end, which is due largely to an expectation that a 'no deal' Brexit will be avoided this year. That represents a staggering 14.5% increase from Thursday's level.