- Pound to be impacted by leadership race; New Zealand Dollar by China data

The GBP/NZD exchange rate is trading at around 1.9109 at the start of the new week, after falling over a percentage point in the week before. Studies of the charts suggest that the exchange rate is set to fall marginally before plateauing in the next five days.

The 4 hour chart shows the pair in a very strong downtrend which now looks even more bearish following the break below the major multi-month trendline drawn from the 2018 lows. This is a very negative sign suggesting a longer-term change of trend. 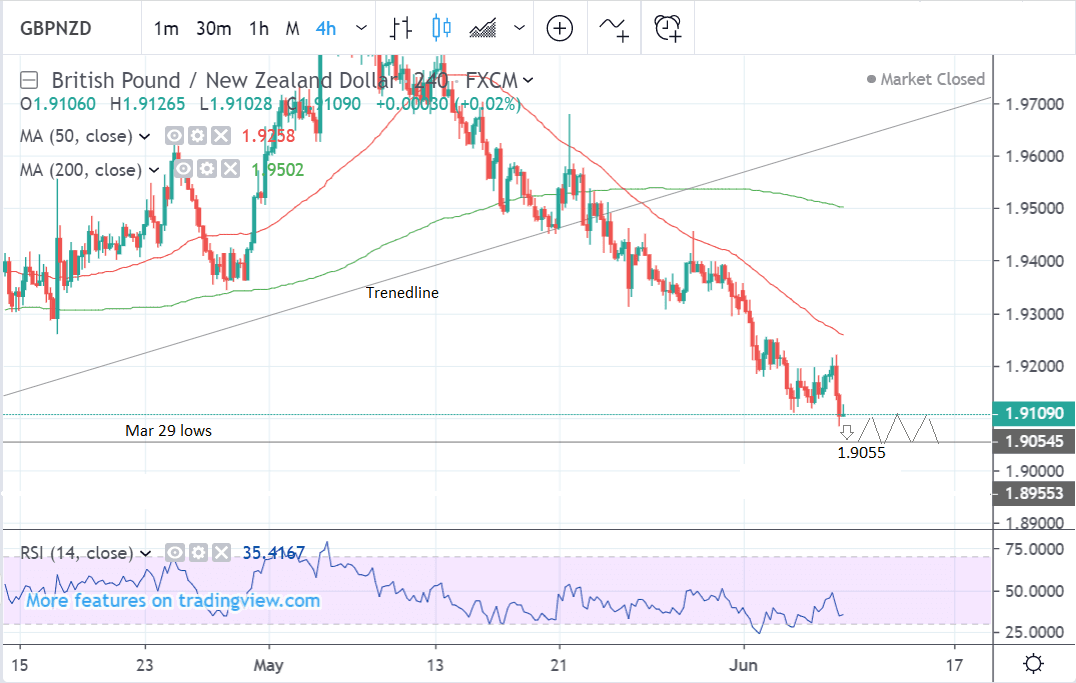 The pair has already moved quite far since the break, however, and this suggests a risk that it could plateau as traders take profit on their bearish bets.

We see a strong possibility of the pair moving down to the 1.9055 March 29 lows and thereafter range trading over the coming week, the time horizon for our short-term forecast, for which we use the 4 hour chart.

The daily chart suggests more downside is expected in the medium-term after a short period of range trading. 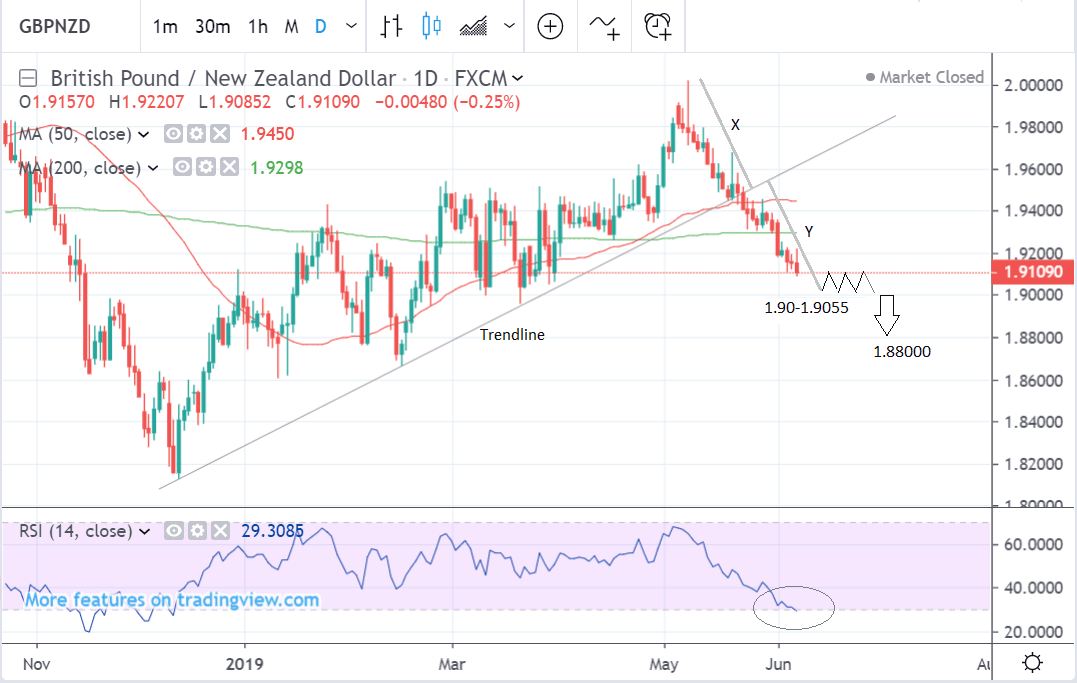 This explains why we see a heightened risk of a sideways move evolving at this juncture - the pair has now reached its target based on the trendline break.

The other sign a pull-back may evolve is the RSI momentum indicator which is at 29, and in oversold territory (defined as below 30). This suggests increased risks that the pair may plateau because it is so oversold, however, it is not necessarily a sign of the end of a trend. RSI can remain oversold for long periods during downtrending markets.

Eventually, the sheer strength of the downtrend leads us to believe it will go lower and hit a target at 1.8800 in medium-term, which we define as between 1-4 weeks in the future, and for which we employ the daily chart in our analysis. 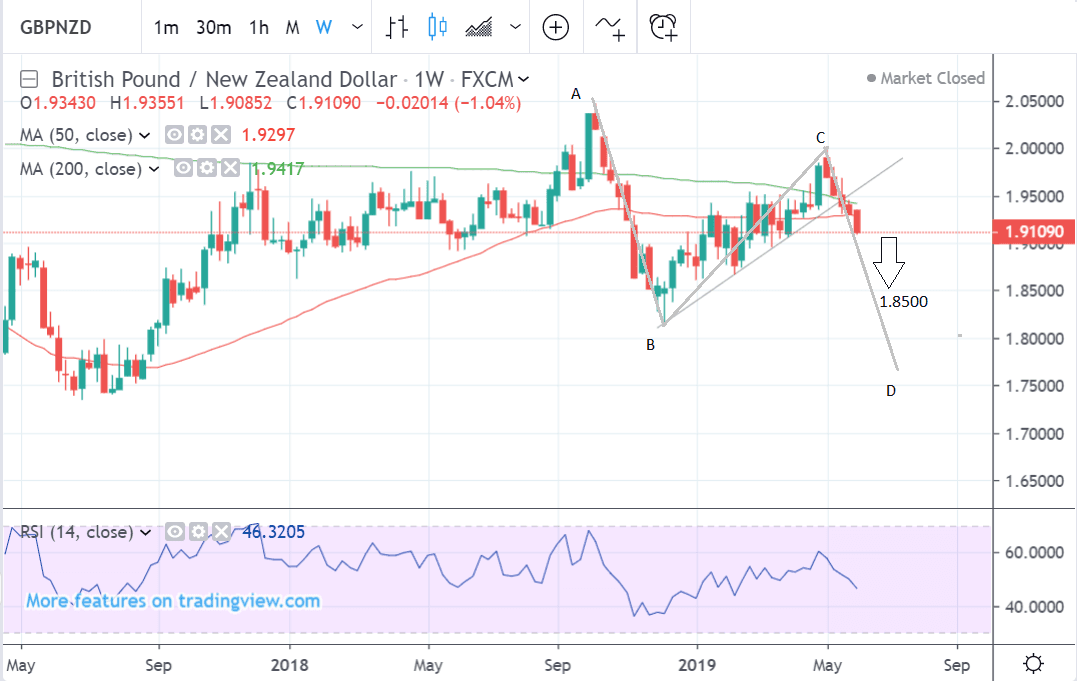 The weekly chart shows how the pair appears to be forming a bearish ABCD or Gartley pattern which has very bearish connotations and encourages a view that supports an extension of the downtrend even further.

These patterns are composed of three waves in a zig-zag formation. The length of A-B can be used to forecast the length of C-D. In this case, it suggests an end target for C-D of around 1.7600.

Whilst it is possible this could be reached in the long-term,

We prefer a more conservative target at 1.8500 for now.

The most important drivers for the New Zealand Dollar in the short-term is Chinese data and global investor sentiment.

The Chinese trade balance is probably the most significant release as it will show the impact of the U.S.-China trade war on exports. It is forecast to rise to a surplus of $20.50bn in May, from 13.8 previously, when it is released on Monday, June 10 at 03.00 BST.

A higher-than-expected surplus will be a positive sign, both from the point of view of showing China’s resilience in spite of the trade war and because higher net exports raise GDP.

Chinese new loans data is also quite important because it reflects the ‘credit impulse’. This is also a contributing factor of growth as most businesses rely on credit to expand. It is expected to show a rise to $1.225tr in May.

Assuming actual data meets expectations it should support the Kiwi. If it falls well below expectations it could raise concerns about the availability of credit to spur new business formation and growth.

Chinese inflation is forecast to show a rise of 2.7% in May compared to a year ago and 0.1% from the previous month, when released at 02.30 on Wednesday, June 12.

Higher inflation, when accompanied by economic growth is normally a positive sign.

Industrial production data is forecast to show a 5.5% rise in April, when it is released at 03.00 on Friday, June 14.

Fixed asset investment is forecast to rise 6.1% when it is released at the same time.

These are also both linked to growth and could impact the outlook for China and therefore its trading neighbours.

On the domestic data front the main releases for the Kiwi are electronic card retail sales for May out on Tuesday at 23.45 and Business NZ PMI - a survey based leading business activity indicator - out at 23.30 on Thursday.