- Markets had been pricing at least one further 2019 rate cut.

- Analysts still look for further rate cut before year is out.

The New Zealand Dollar was riding high at the top of the G10 league table Wednesday after depute Reserve Bank of New Zealand (RBNZ) governor Christian Hawkesby said that Kiwi interest rates are likely to remain at current levels for the foreseeable future.

Hawkesby spoke at a panel discussion last week in which he told an audience in Tokyo the cash rate is expected to remain at 1.5% for the foreseeable future, but qualified this by also saying the bank is ready to act in the event of unforeseen changes in the economic outlook. Text of the speech was released Wednesday.

The comments have contradicted market bets that the RBNZ would cut the cash rate again before the 2019 year is out, taking it to a new record low of 1.25%. Markets have been eyeing the August 07 meeting for the next rate cut.

"Our ASB colleagues continue to expect the RBNZ to cut the cash rate to 1.25% in August," says Kim Mundy, a strategist at Commonwealth Bank of Australia.

The Reserve Bank of New Zealand cut its cash rate to a new record low of 1.5% in May, citing below-target inflation and a souring economic outlook that dashed its hopes of seeing the consumer price index rise above the midpoint of the 1%-to-3% target.

Pricing in the overnight-index-swap market implied on Wednesday an August 07 cash rate of 1.32% and a November 13 cash rate of 1.15%, with those numbers up from 1.31% and 1.14% respectively Tuesday. Both are below the current cash rate, suggesting the market expects further cuts this year.

A threat of lower rates can see investors driven out of and deterred away from a currency, with speculation about rising rates having the opposite effect.

Hawkesby's comments and the resulting adjustment of expectations for Kiwi interest rates pushed the New Zealand Dollar to the top of the G10 league table during early trading on Wednesday. But some analysts say this was not the only thing driving the Kiwi higher on the morning.

"We don’t see much in these comments and the 0.5% gain in NZD illustrates how market pricing can skew a move the other way on news of not much significance," says Lee Hardman, a currency analyst at MUFG. "The broader risk-on trading dynamic today is as perhaps a more credible explanation and the outperformance of NZD merely reflects the fact that NZD has been the 2nd worst performing G10 currency in Q2 to date."

Until this week the Kiwi was down more than 2% against the U.S. greenback for 2019 and had fallen more than 5% in the last 12 months, but it's risen from that trough in response to a broad retreat of the U.S. Dollar.

The U.S. Dollar is struggling because markets are betting the Federal Reserve will cut its interest rate as many as three times before the 2019 year is out. Analysts are also increasingly concerned about the impact the trade war with China will have U.S. growth.

Previously, financial markets were solely concerned with the impact the trade war would have on global growth, which explains earlier losses for so-called risk assets like the New Zealand and Australian Dollars.

"Overall, US data is still holding up relatively well and markets pricing in over 50bps of cuts by the end of the year does seem overdone," says MUFG's Hardman. "The rates market remains richly priced for cuts and a lack of change in guidance may soon start to diminish the scope for further notable dollar selling from here." 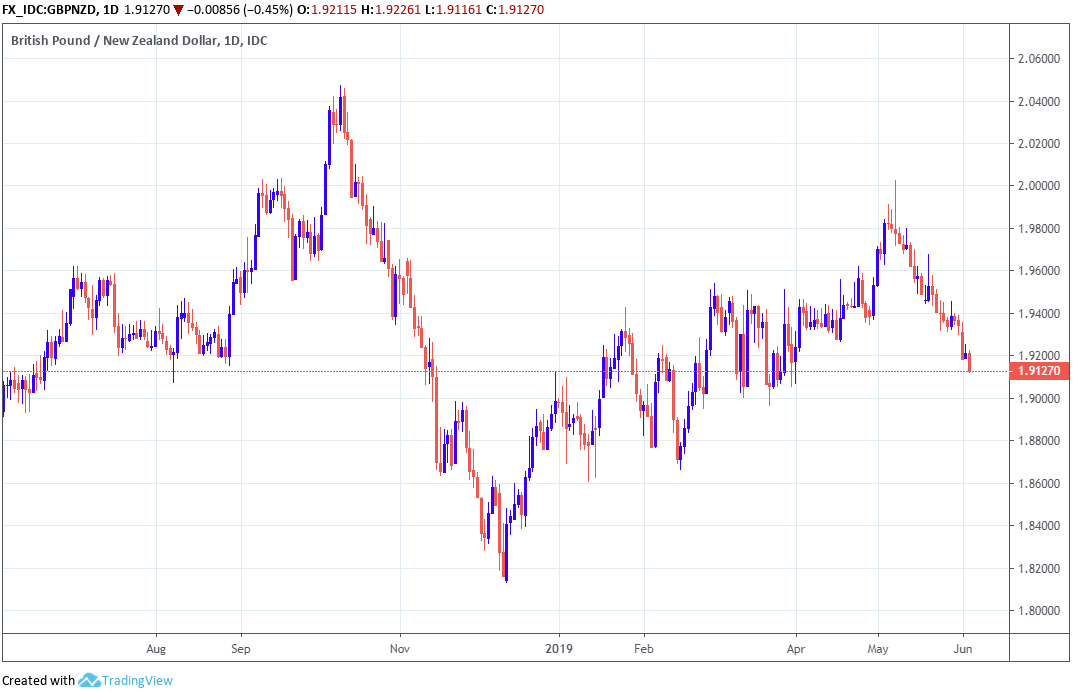 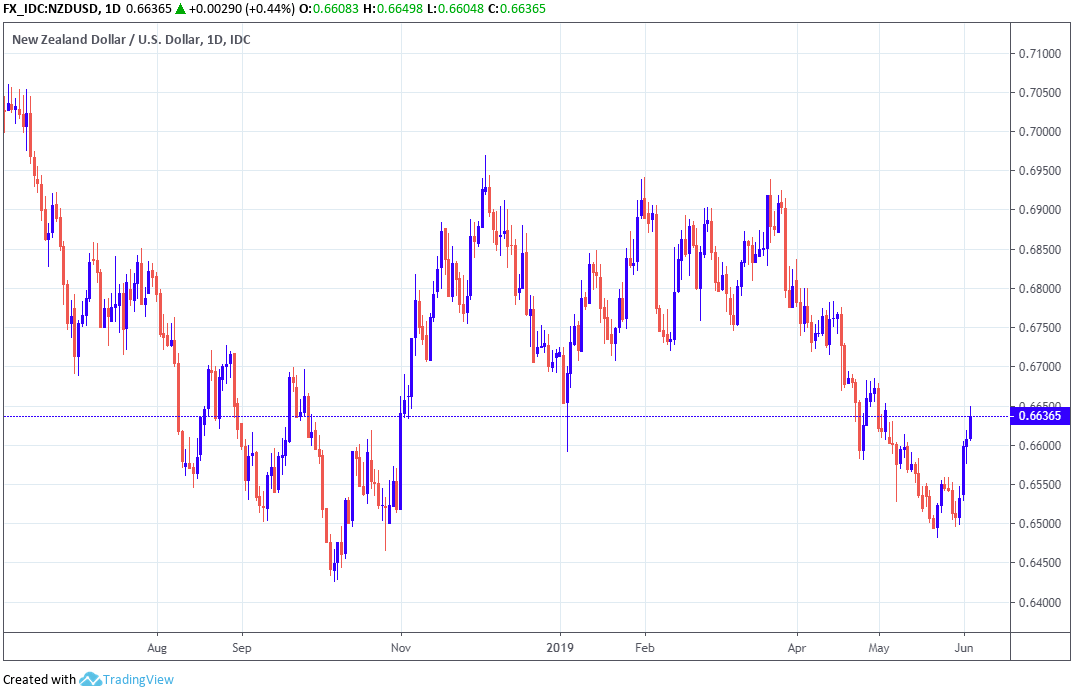 MUFG forecasts the NZD/USD rate will rise from 0.65 Tuesday to 0.68 before year-end and that the Pound-to-New-Zealand-Dollar rate will decline from 1.92 to 1.88 at the same time.

The Japanese firm, the world's fifth largest bank, says any further losses incurred by the Kiwi this year should be both shallow as well as short-lived.

"With US-China trade conflict risks rising we are not convinced that just one rate cut will be the key to returning New Zealand to above potential growth. Market participants also appear sceptical. The OIS curve indicates a further 25bp cut is now fully priced over the coming twelve months," writes Derek Halpenny, head of research, in MUFG's latest monthly review of currency markets.

MUFG's idea is that with the financial markets already betting heavily the RBNZ will cut rates again this year there is very little scope for monetary policy to drive the Kiwi sustainably below its current levels.

Interest rate decisions are normally only made in relation to the outlook for inflation but have influence over capital flows, which tend to move in the direction of the most advantageous or improving returns.

Kiwi inflation has been below the midpoint of the 1%-to-3% target band for years now and the RBNZ needs faster economic growth in order for it to pick up but with the world's two largest economies engaged in an escalating tariff fight and economic conflict, the probability of this happening without further intervention is seen as slim.

"If the RBA cut twice and if China growth decelerates and tensions with the US remain high, another RBNZ rate cut looks plausible to us. But like Australia, with that priced, we do not see a big downside move for NZD," Halpenny says.

A threat of lower rates can see investors driven out of and deterred away from a currency but in the case of the New Zealand Dollar, financial markets have already taken another rate cut to the bank, which means the currency might not fall if another cut is actually delivered.