- Break above highs to provide confirmation

Technical studies suggest the outlook for the Pound against the New Zealand Dollar is positive, but much will depend on this week's cross-party Brexit talks as well as an highly-anticipated Reserve Bank of New Zealand meeting mid-week.

The GBP/NZD exchange rate is trading at 1.9802 at the start of the new trading week, close to the previous week's close.

However, compared to where the exchange rate was trading last Monday, the Pound is over 2.0% higher, suggesting the near-term momentum remains firmly with Sterling. 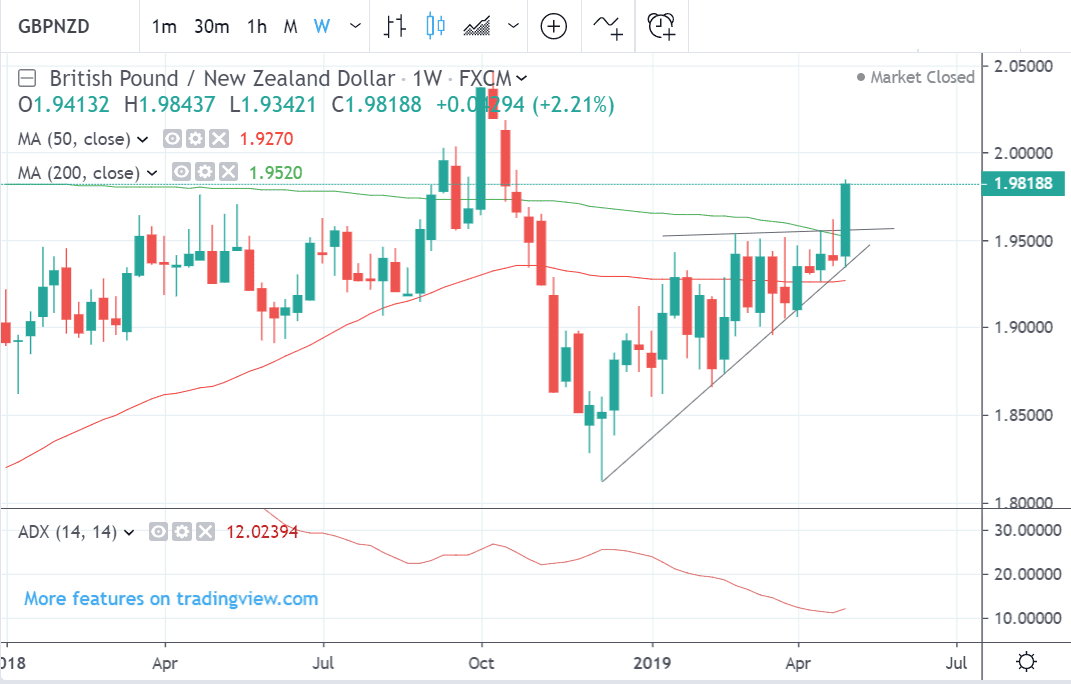 The technical outlook has turned bullish - in both the short-term and medium-term, whereas previously it was only so in the short-term. The pair has clearly broken into new territory on the weekly chart and has definitively pierced the 200-week moving average (MA). A strong sign the uptrend has firmed. 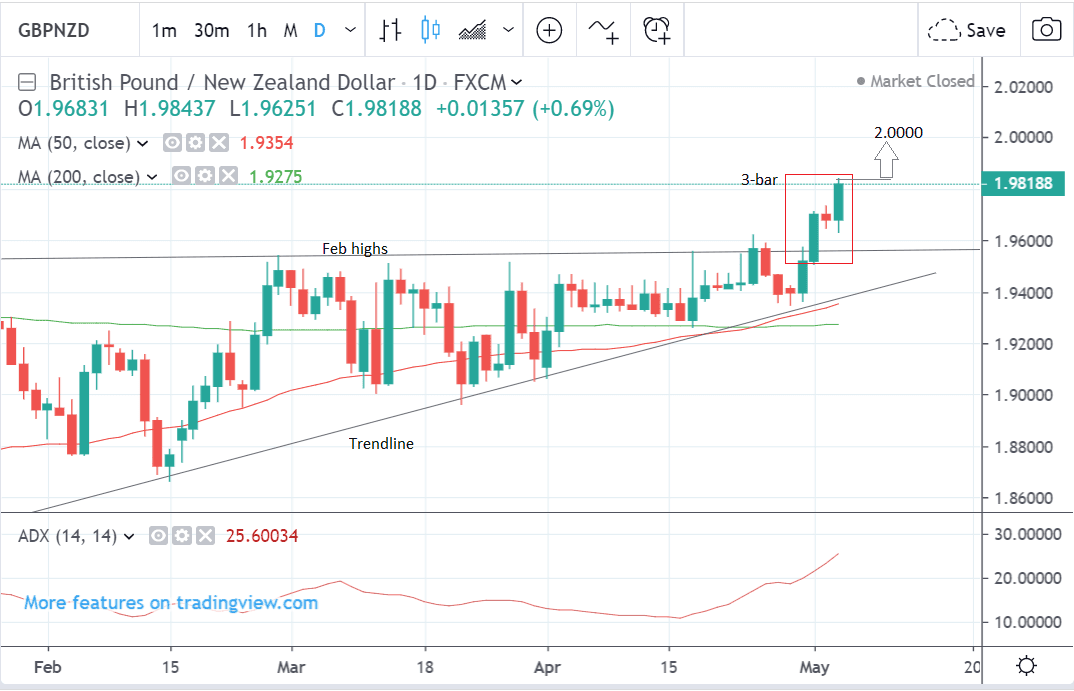 More importantly, on the daily chart, the pair has formed a high probability continuation pattern (bordered in red), made up of three bars in which the middle bar has a small real body and the two outer bars are long and green. This sort of pattern, called a three bar continuation, is a high probability signal the uptrend is going to continue.

It is especially so when the ADX indicator in the lower pane is above 20 and rising, as is the case in this example. ADX measures how strong the trend is. When it has just moved above 20 and is rising it is often a sign a new uptrend is getting going.

The presence of the 3-bar continuation suggests an 80% or so probability of continuation of roughly 150-200 points, taking the exchange rate up to a target at circa 2.0000. Such a move would be confirmed by a clear break above the 1.9844 highs.

The main event for the New Zealand Dollar is the Reserve Bank of New Zealand (RBNZ) policy meeting at 3.00 BST on Wednesday, May 8.

The RBNZ is one of the more likely central banks to cut interest rates amidst ongoing soft inflation trends and a lacklustre global economy.

Lower interest rates are generally negative for currencies as they lead to lower inflows of foreign capital, which tend to prefer jurisdictions with higher rates of return.

"NZD/USD has scope for further short‑term depreciation below 0.6600 if the RBNZ cuts the Official Cash Rate by 25bp on Wednesday," says Richard Grace, a foreign exchange strategist with Commonwealth Bank Australia.

New Zealand lender ASB are expecting an interest rate cut, but acknowledge such an outcome "remains a close call."

Economists note New Zealand economic growth has slowed, and the risk is that there is not enough momentum in the economy to lift inflation back to the 2% target.

"Moreover, New Zealand’s Q1 2019’s softer employment report raises concerns that cooling growth momentum will translate into increased labour market slack. One complicating factor is that the RBNZ’s Wednesday meeting heralds the first monetary policy decision under a new committee structure with the decision now a majority vote, rather than a sole decision by the Governor," notes Grace.

In recent media interviews, RBNZ Governor Orr has struck a very neutral tone which contrasts with the explicit easing bias the RBNZ moved to in March.

The RBNZ now has a dual mandate to achieve low inflation as well as maximum sustainable employment, and recent jobs data was not particularly strong.

“With both the latest CPI and jobs reports out of New Zealand coming in below expectations, there’s a high probability the RBNZ will lower its official cash rate by 25 bps to 1.50% on Wednesday,” says Raffi Boyadijian, an economist at FX broker XM.com.

Also of the view that the RBNZ will cut rates is the bank Wells Fargo.

“In response to a weaker economic outlook, the Reserve Bank of New Zealand (RBNZ) has turned more dovish, explicitly stating at its March meeting that the likely direction for the next Official Cash Rate move would probably be down….We view a rate cut at next week’s meeting to be likely, while the consensus leans toward the central bank moving forward with a rate cut as well,” say Wells Fargo in an economic briefing to clients.

How the New Zealand Dollar reacts to a rate cut is difficult to say: clearly expectations for such an outcome are relatively elevated at this point in time and the rules of currency markets state that when expectations are met, a currency will be unmoved.

It is surprises that move currencies.

Therefore, failure to cut rates could in fact spark a knee-jerk move higher.

Much will depend on the guidance offered by the RBNZ: if there is a rate cut and it is accompanied by guidance for further rate cuts then the currency could fall as it suggests the RBNZ is more 'dovish' than markets had expected.

We expect Brexit to remain the major mover of the Pound over coming days as this week has been set as the deadline by Prime Minister Theresa May for a deal between Labour and the Conservatives to be agreed.

Reports over the weekend suggest May is prepared to offer Labour fresh concessions to allow the two sides to come together.

According to Tim Shipman, political editor at The Sunday Times, "Theresa May will take a final desperate gamble to deliver Brexit this week by offering Jeremy Corbyn three major concessions in a bid to force MPs to back a new deal."

On Tuesday, May is being tipped to make a “big, bold” offer to Labour.

This could well be the point at which we find out whether a cross-party compromise is possible.

However, there are fears the PM's offer "could split the Conservative Party down the middle," says Shipman.

Labour are demanding the UK enters into a customs union with the EU following Brexit, which would mean the country is unable to strike independent trade deals which has been a key test of Brexit for many in the Conservative Party.

Labour and the Conservatives might well strike a deal but both parties are deeply divided over the issue and therefore even a deal does not necessarily a majority in the House of Commons can be secured.

So while the news pulse has turned positive for Sterling over recent days, there are clear limits as the risk that no deal is done and the Prime Minister resigns remains substantial we believe.

The main economic release for the Pound is preliminary GDP data for the first quarter, out at 9.30 BST on Friday, May 10.

This is expected to show a 0.5% rise compared to 0.2% of Q4 which would suggest the economy remains robust in the face of the ongoing Brexit saga. On an annualised basis i.e extrapolated to provide a yearly estimate, GDP is expected to have rise 1.8% compared to the 1.4% previously.

Business investment is expected to remain especially subdued as it is one of the facets of the economy hardest hit by Brexit.

Another important release is Halifax house prices out at 8.30 on Wednesday, and speeches from the Bank of England's Cunliffe and Haldane on Tuesday evening.