- Market has priced-in only -0.25%, suggesting downside risk for NZD.

The New Zealand Dollar was softer Wednesday after the first-quarter unemployment report reinforced a tide of negative sentiment towards the Kiwi, with weak wage growth seen by analysts as an incitement for the Reserve Bank of New Zealand (RBNZ) to cut its interest rate.

Financial markets have long been betting that RBNZ rate cuts are in the cards for 2019 but pricing in Kiwi interest rate markets is yet to fully reflect the full magnitude of the cuts that are on the way, which suggests downside risks to the New Zealand Dollar.

New Zealand posted a surprise fall in its unemployment rate for the first quarter Wednesday, with the jobless figure falling from 4.3% to 4.2%, but this came only after a fall in the participation rate which artificially reduced the number of individuals classed as unemployed.

The other detail in the jobs data was less encouraging for economists, with overall employment declining by -0.3% during the period as some individuals became unemployed and in part due to growth in the working age population.

Kiwi wage growth was dispiritingly lacklustre at just 2% for both public and private sector employees. That means, after taking account of the 1.5% inflation rate for the year to the end of March, real wage growth was only around 0.5% during the first quarter.

"Wage inflation ticked up 0.3% q/q, leaving annual growth at 2.0% y/y, less than we and the RBNZ expected. Looking through temporary factors, underlying wage inflation is very subdued. This data is consistent with the softer growth outlook that implicitly lay behind the RBNZ’s dovish March OCR Review," says Michael Callaghan, an economist at ANZ. 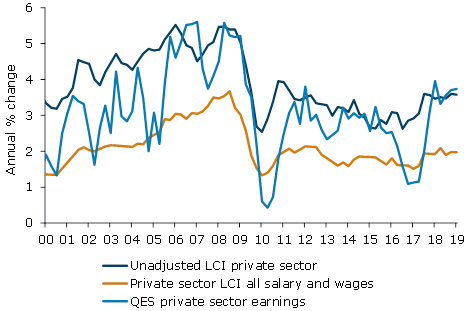 Kiwi policymakers have long struggled against below-target inflation and the disinflationary forces that have scuppered attainment of a consumer price index that is above the midpoint of the central bank's 1%-to-3% target band.

In the name of the inflation target, and with one nervous eye on a weakening economy, the Reserve Bank of New Zealand adopted a so-called easing bias in March when it warned markets the next move in its interest rate is likely to be a downward one.

That prompted a big slump in the value of the New Zealand Dollar, which has been on its back foot for much of the time since then, but there could be more pain in store for the Kiwi because financial markets have fully priced-in only one rate cut for 2019 when many economists say that two are likely.

"Our expectation is that the recent soft patch for GDP growth, and still-strong labour force attachment will likely translate into additional labour market slack and still-sluggish wage inflation. Both of these factors will likely necessitate more monetary policy support. We expect 50bps of OCR cuts over the remainder of the year, with the RBNZ potentially moving as soon as next Wednesday," says Mark Smith, an economist at ASB Bank. 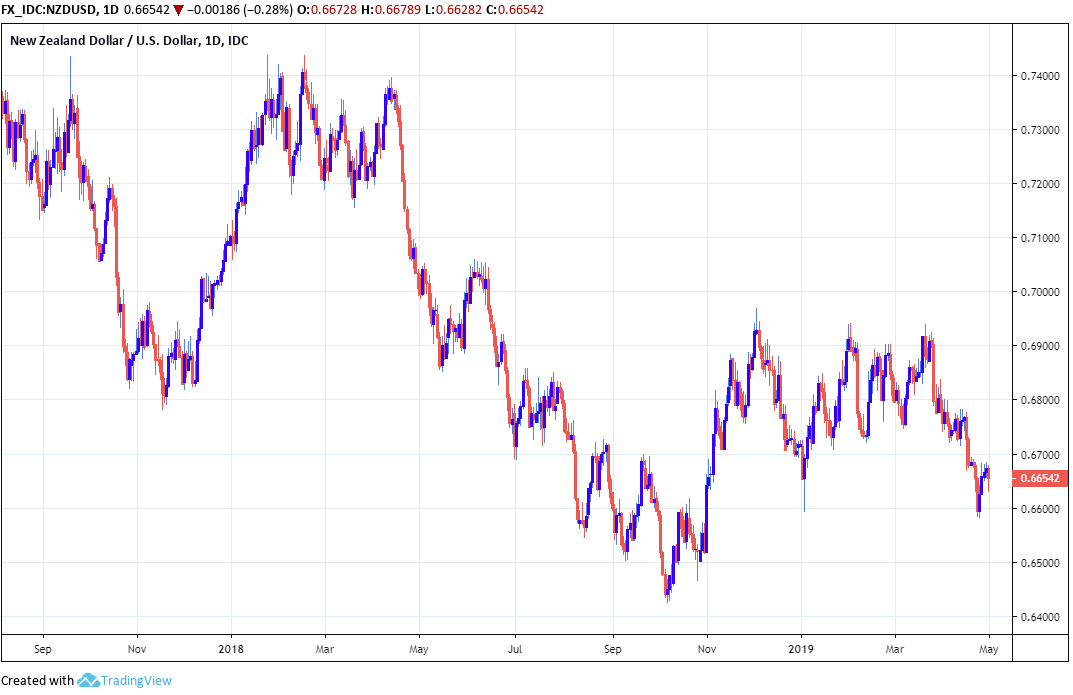 "NZD is the under performer on soft jobs data raising expectations for RBNZ easing next week. Employment shrunk in Q1 against expectations for a 0.5% gain," says Elsa Lignos, head of FX strategy at RBC Capital Markets. 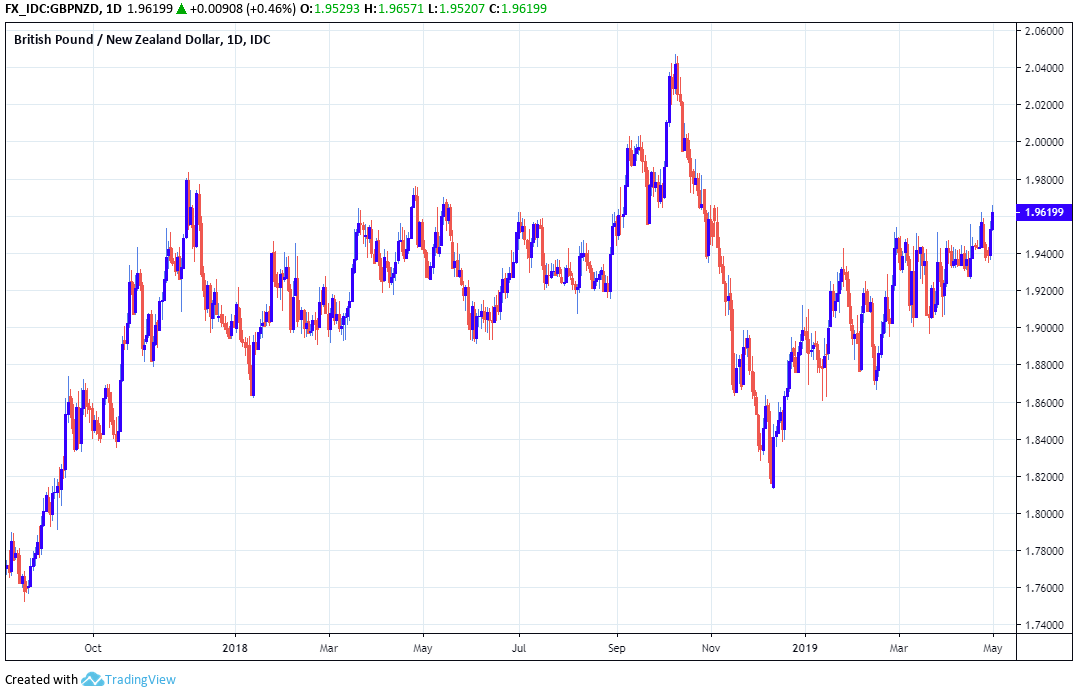 "After moving to an easing bias in March, RBNZ Governor Adrian Orr stated that changes to the cash rate were data dependent.  Orr alluded to the CPI (which was weak) and the labour market data.  Q1 labour market data suggest that slowing economic growth is translating into softer demand for labour.  The market is currently pricing a 63% chance of a May rate cut," says Kim Mundy, a strategist at Commonwealth Bank of Australia.

Pricing in the overnight-index-swap market implies a May 08, 2019 RBNZ cash rate of just 1.65%, which is below the current 1.75% and suggests that investors see a substantial probability of a rate cut coming at next week's meeting.

However, and according to that same pricing, it's not until  August 07, 2019 that one full 25 basis point reduction in the cash rate becomes baked into the 'OIS curve'. That means it could be August before the bank actually cuts rates.

This suggests a toss up between the May, June and August meetings, although there is one significant additional factor that is complicating the process of forecasting the first rate cut and that's the new Monetary Policy Committee that will assume the RBNZ governor's responsibility for setting the cash rate from next week.

"Looking at the OIS curve, swap pricing implies an interest rate cut at the next meeting on the 8th of May has gone up in probability from 40% last night to 60% this morning on the back of this data," says Lee Hardman, a currency analyst at MUFG.

"The new RBNZ Committee will be wary of reading too much into these labour market statistics for a few reasons: recent outturns have been very noisy, the labour market tends to lag GDP growth, and the data comes late in the forecasting process. That said, they will take some comfort from continued resilience in the unemployment rate, with employment near its maximum sustainable level. The outlook is murky, however, and we expect OCR cuts to kick off in August," says ANZ's Callaghan.

There is a significant amount of uncertainty over whether the new committee will want to take the bold step of cutting the cash rate at its very first meeting. On the one hand, policymakers may not want to rock the boat too soon but, on the other hand, there's always a chance that a majority of voting members adopt the view that the cash rate should have been cut a long time before now.

New Zealand inflation has been below the midpoint of the 1%-to-3% inflation target for much of the last seven years and, although until recently the RBNZ had held onto hopes that price pressures would soon pick up of their own accord, the economy slowed shaprly in 2018 and most forecasts suggest it will do so again this year.

That's a problem for the RBNZ because as much as inflation pressures are influenced by supply side factors, a tight labour market, rising wages and steadily improving demand within an economy are also critical to sustainable achievement of the target.