- NZD collapses against USD, GBP and AUD after inflation disappoints.

The New Zealand Dollar was clobbered overnight after first-quarter inflation data all-but sealed the deal on a Reserve Bank of New Zealand (RBNZ) interest rate cut for next month, but Commonwealth Bank of Australia says the Kiwi unit will recover regardless of what the RBNZ does next.

New Zealand's Dollar is forecast to recover ground lost to both the U.S. Dollar and Sterling before the year is out even if the Reserve Bank of New Zealand goes ahead with an interest rate cut in May, which would take the Kiwi cash rate down to a new record low.

Inflation rose by just 0.1% in the first quarter of 2019 Statistics New Zealand said Wednesday, unchanged from in the final quarter of 2018, when markets had looked for the consumer price index to rise by 0.3%.

This was enough to pull the annualised rate of inflation down to 1.5%, from 1.9%, which takes it further below the midpoint of the 1%-to-3% target band.

The trimmed-mean measures of inflation, which are New Zealand's equivalent of a core inflation rate, ranged between 1.7% and 1.9% last quarter.

Those measures remove the most volatile items from the goods basket, which are often commodity items, in order to paint a better picture of the underlying trend in price pressures.

"A lower NZD should start to feed more fully into tradable prices, and oil has already rallied 50% from the December low. This will result in a higher tradable inflation forecast in the May MPS, limiting any perceived risk of lower inflation expectations affecting pricing. Most importantly, non-tradable inflation was bang on the RBNZ’s (and our) expectation," says Sharon Zollner of ANZ. 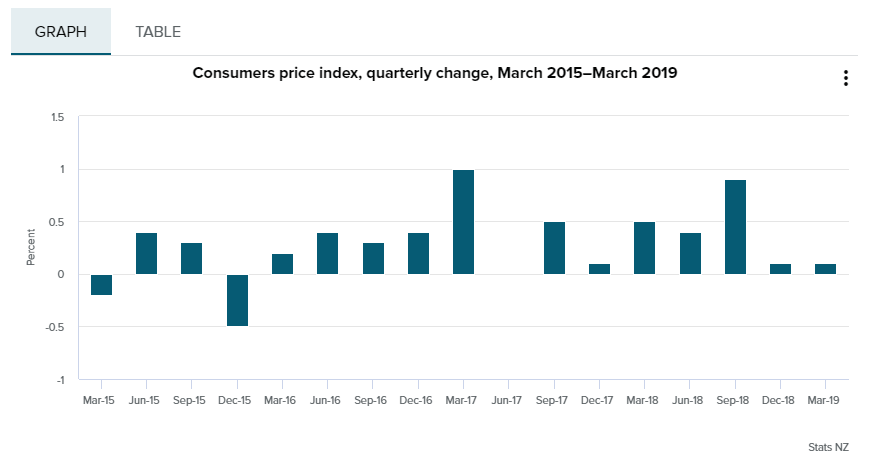 Kiwi policymakers have been struggling with below-target inflation for around seven years and, with the economy decelerating over the last year, the RBNZ has become more pessimistic in its outlook for consumer price growth of late.

The data could encourage RBNZ pessimism however, Zollner and the ANZ team wrote to clients Wednesday saying the situation is not as bad as the headline number suggests. Zollner says most of the inflation fall resulted from declines in commoditised "tradeables" prices.

"Non-tradable inflation was bang on the RBNZ’s (and our) expectation. While inflation is a lagging indicator, the RBNZ will take a degree of comfort from the fact that non-tradables is at its highest level in five years, with weakness concentrated in the volatile and transitory tradable component," Zollner writes.

However, even if the first-quarter loss of inflation pressures does prove temporary, the consumer price index would still be a long way off from sustainably holding above the the midpoint of the 1%-to-3% target.

The RBNZ will need faster economic growth to get inflation back to where it is wanted, but the New Zealand and global economies appear to be at an inflection point from which growth will either rebound, or fall even further. This is why markets are betting heavily the RBNZ will soon cut its interest rate.

"Financial markets reacted swiftly," says Michael Gordon, an economist at Westpac. "Market pricing has now shifted to a better than even chance of an OCR cut at the May Monetary Policy Statement. As it happens, we agree with that pricing – we switched to calling a May OCR cut a couple of weeks ago. But as RBNZ Governor Adrian Orr has emphasised in recent interviews, the outcome of the May review is far from settled."

"Our view is that downside risks to the inflation outlook have grown in recent months and the NZ economy looks increasingly unlikely to be able to generate sufficient economic momentum that keeps CPI inflation comfortably within the 1-3% inflation band.  We expect 50bps of OCR cuts over 2019, with today’s CPI print raising the odds of a May cut by the RBNZ," says Mark Smith, an economist at ASB Bank.

That came after the bank shifted from guidance that suggested last year that the next move would be up, to a more neutral stance that has gradually turned into a so-called easing bias, placing markets on high alert for a rate cut.

Investors are now betting heavily the bank cuts rates at least once this year, although some are looking for an initial cut to come as soon as the May monetary policy meeting, which will be the first under the new Monetary Policy Committee that will make decisions through consensus.

"As well as strong Chinese data, we saw a weak New Zealand CPI release (1.5% y/y vs 1.9% last and 1.7% expected). That saw the NZD fall and gave AUD/NZD a big push higher. The bounce from 1.03 a month ago has been brutal, though in the last 5 years, AUD/NZD has treaded in a 1.02-1.14 range, averaging 1.08, so there is still room to rise, especially if you glance at relative bond yields," says Kit Juckes, chief FX strategist at Societe Generale. 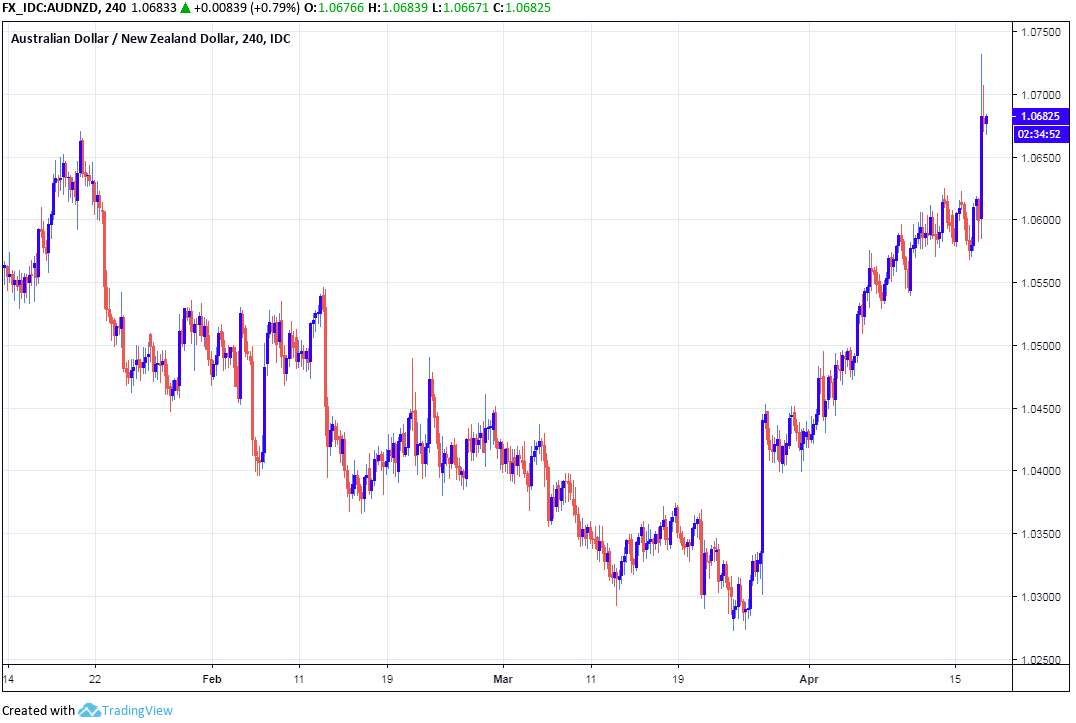 Consensus now favours RBNZ rate cuts this year, with the only unanswered question being one of when the bank will move. Pricing in the overnight-index-swap market implied on Wednesday, an RBNZ cash rate of 1.61% for May 09, which is below the current 1.75% and down from 1.68% on Tuesday.

The implied cash rate for November 13 fell from 1.43% Tuesday to 1.37% Wednesday, suggesting investors see almost no chance of New Zealand avoiding a cut this year. The above pricing suggests the market is attempting to gauge whether the bank will cut rates once, or if it will do so twice.

"The risk of an RBNZ interest rate cut has clearly lifted. The New Zealand domestic economy has softened, and recent New Zealand business surveys indicate further softness lies ahead," says Richard Grace, head of FX strategy at Commonwealth Bank of Australia, in a note to clients. "An RBNZ rate cut is not a game changer for the NZD, and a knee-jerk depreciation in the NZD/USD following an RBNZ interest rate cut is unlikely to be sustained for long."

Rate cuts would normally be a clear negative for a currency but some analysts, with one eye on the losses already sustained by the New Zealand Dollar and the other on events over in North America, are beginning to doubt whether the Kiwi currency can actually go much lower. 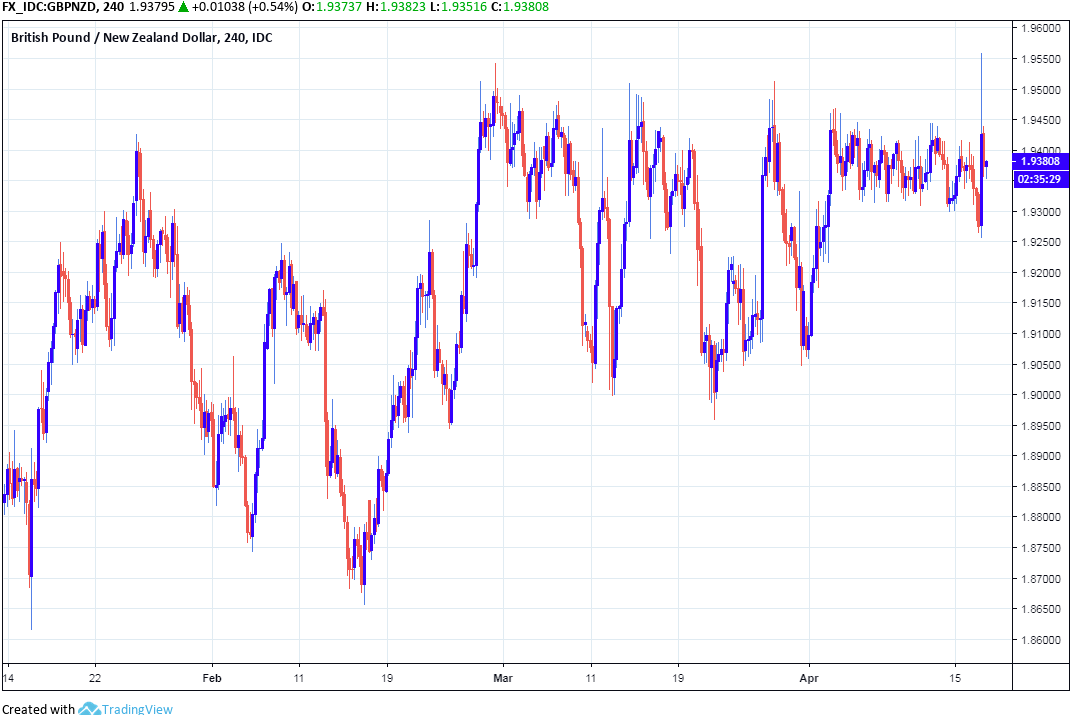 Grace says the last 1.25% of RBNZ rate cuts, which began in 2015 and ended in November 2016, did not generate a sustained depreciation in the New Zealand Dollar and that there is little reason to think that further "incremental" cuts will have much impact this time around.

The New Zealand Dollar is down -8.25% against its U.S. rival for the 12 months to the middle of April 2019 and the market has already "priced-in" a -0.25% rate cut being delivered in the next 12 months, so it could be argued that RBNZ easing is already in the price of the Kiwi.

However, Grace says that history suggests "incremental" rate cuts and hikes are much less impactful on currency prices than outright reversals in interest rate policies where central banks begin to cut rates at the end of a hiking cycle.

"While the point above, about an incremental cut to the RBNZ's official cash rate is relevant, expectations ofor U.S. policy rates are also important. Fed interest rate cuts are currently priced into the one-year and two-year part of the U.S. curve. Expactions for Fed rate cuts indicate the USD is not about to re-streghen. Established trading ranges are likely to prevail," Grace writes.

Grace and the CBA team forecast the NZD/USD rate will continue trading within a 0.66-0.6970 range for a while year, with the exchange rate likely to end 2019 around 0.69. They project an increase to 0.7100 for next year. Both forecasts assume a recovery of the New Zealand and global economies. 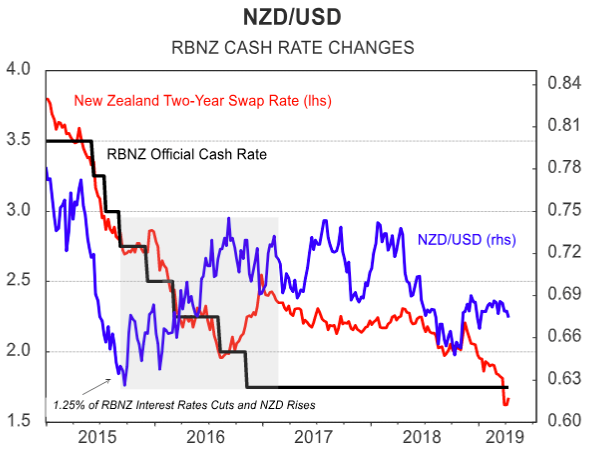 Above: NZD reactions to changes in RBNZ rates. Source: Commonwealth Bank of Australia.