The Pound-to-New Zealand-Dollar rate was trading around 1.9212 Monday after rising by a quarter of a percent in the previous week, although studies of the charts suggest a neutral outlook for the days ahead.

The Pound-to-Kiwi rate advanced last week because of New Zealand Dollar (Kiwi) weakness, rather than Sterling strength, as the British currency also fell relative to many of its rivals.

Losses hit the Kiwi after the Reserve Bank of New Zealand (RBNZ) warned again it might have to cut interest rates over the coming months. It now says the next move in the cash rate is most likely to be a downward one.

Brexit is likely to be a major driver of Sterling volatility in the week ahead, with Monday evening marking an especially important point as the UK Parliament will vote on a series of different Brexit options in an attempt to find one that MPs would support.

Last week no one option commanded an outright majority but a customs union was only 6 votes short. If it were to win a majority this time the government would be asked to consider backing it as its lead proposal. Such a Brexit would be considered ‘soft’ and supportive of Sterling.

The technical outlook is neutral in the short-term but marginally favours more downside in the medium-to-longer-term. 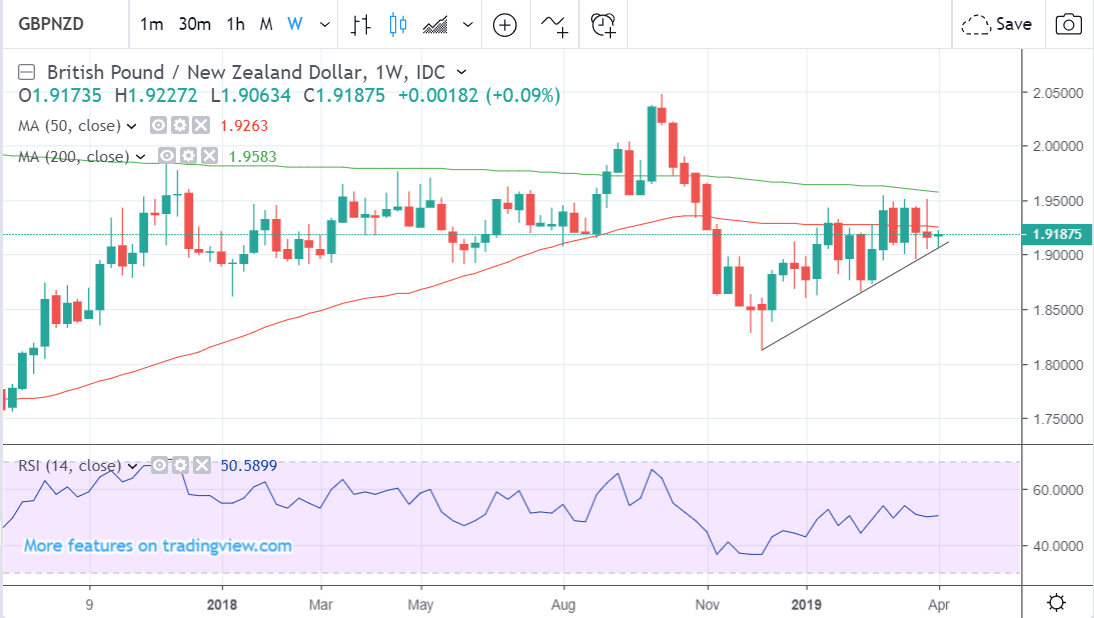 Price action on the weekly chart looks more inclined toward another leg lower because the structure of the market since the September 2018 highs is bearish. The steep descent to the December lows followed by the more gentle recovery up to February's 2019 highs looks like an incomplete ABCD, or Gartley, pattern.

ABCD’s are large three-wave, zig-zag-shaped, patterns in which the first and third waves are of a similar length. If such a pattern is unfolding on the GBP/NZD chart the final wave is forecast to fall to a minimum target of 1.7975 and a maximum target of 1.7160. 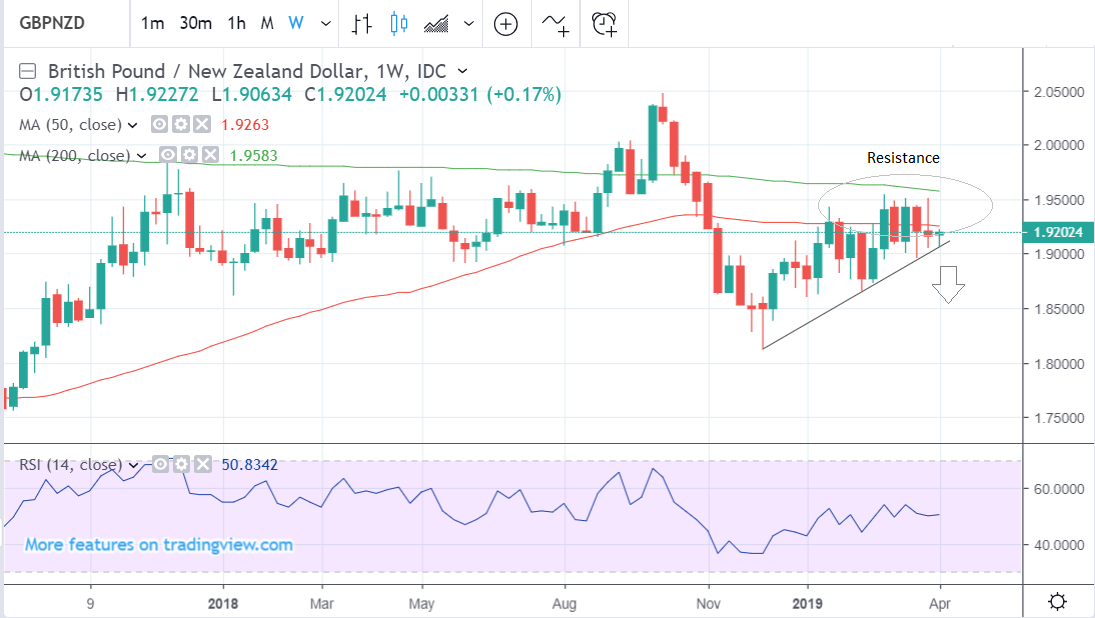 The bearish medium-term outlook is further reinforced by the locations of the major moving averages (MA). Both the 50 and 200-week MAs are situated just above the current market level and present a cap of resistance above which it would be difficult for the pair to break, making the path of least resistance down. 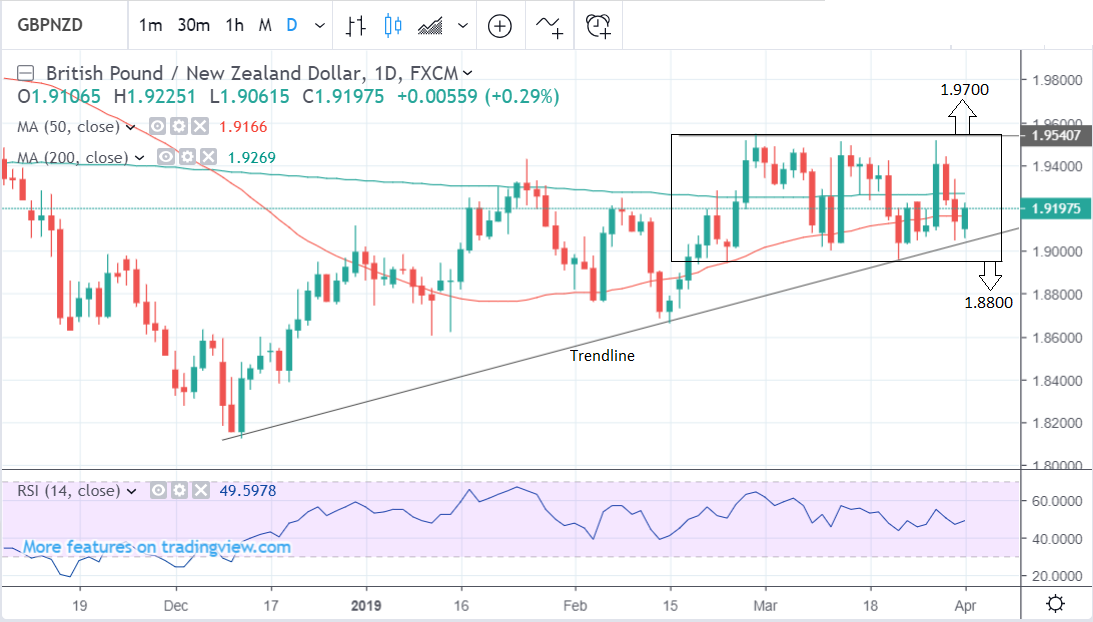 Above: Pound-to-Kiwi rate shown at daily intervals, with upward-sloping trendline.

The short-term trend is more neutral and shows the pair trading in a sideways consolidation. The pair remains above a major trendline drawn from the December lows. The daily chart gives no hint of where the pair might trade next - it could break either higher or lower.

If it breaks lower, below the 1.8950 lows, in line with the medium-term bearish trend it would be expected to continue to an initial target at 1.8800. Alternatively, a break above the range highs at 1.9550 could result in an extension higher to a target at 1.9700.

The main fundamental driver of the New Zealand Dollar in the week ahead is probably likely to be the outlook for U.S.-China Trade talks and any news or data regarding the Chinese economy since it is New Zealand’s (NZ) largest trading partner. The Kiwi calendar is quiet this week.

So far data from China has started the week on a positive note after the latest PMI surveys came in better than was expected. The China Federation of Logistics and Purchasing (CFLP) manufacturing PMI came out at 50.5, up from 49.2, when markets had looked for an increase to 49.6.

Technically, the PMI result means China's manufacturing sector should have exited the recession during the first quarter, which could be a positive sign for the global economy so long as the recent boost is not simply the result of government stimulus.

The outlook for U.S. and Chinese trade talks has also improved after China’s Vice Premier resumed talks with US officials in Washington last week. A deal is expected before the end of April when President’s Xi Jingping and President Donald Trump have promised to meet for what could be a signing summit.

The main economic release is the Global Dairy Trade Index (GDTI), which will reveal the results of tha latest twice-weekly auction of dairy products. The main one of these is dried whole milk, which is NZ’s main export.

The last GDT auction showed a 1.9% rise in the overall index and a 4.0% increase in whole milk powder prices. Increase in the GDTI would normally be considered a positive factor for the Kiwi.

The main event in the week ahead for Pound Sterling will be the opening of a new chapter in the Brexit saga, with markets now focused on April 12 as the new deadline by which the UK's withdrawal must be formally agreed.

Prime Minister Theresa May now faces as choice between pursuing a so-called no deal Brexit, and requesting from the EU another extension of the Article 50 negotiating window that will almost certainly require participation in the EU parliament elections.

There is still no one path ahead that can command a majority in the House of Commons, although MPs who've been attempting to sieze control of the Brexit process from the government will get another chance on Monday to force the government into pursuing a future relationship model they find more palatable.

Some of the ideas put forward by members of parliament include a "permanent customs union", the revocation of Article 50 and another referendum among others. All of those options are likely to meet fierce resistance from the minority of Brexit-supporters in parliament, while also being electorally controversial.

There is also a possibility Theresa May could try to hold a fourth vote on her withdrawal agreement although it remains to be seen whether or not she can win it.

Apart from Brexit drama, the March IHS Markit PMI surveys will also be released, although they are unlikely to have much impact on Sterling given the market's unrelenting focus on Brexit.

Euro-to-Dollar Week Ahead: In Recovery Mode and Headed for Party at the European…