- Analysts say gains could be short-lived

The New Zealand Dollar is outperforming rivals in mid-week trade on the back of some stronger-than-forecast inflation numbers and improved investor sentiment on global markets. 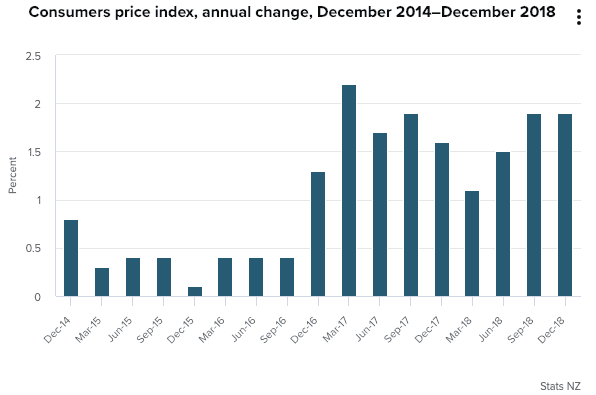 The 0.1 percent quarterly rise in CPI inflation was led by typical seasonal rises in international airfares, which were largely offset by seasonal falls in prices for vegetables.

Prices for games, toys, and hobbies also contributed to the rise, driven by the release of popular, new, and more expensive electronic video games during the quarter.

The falling price of fuel meanwhile placed a cap on advances.

“The price of petrol fell continually throughout the quarter, down from highs in October,” says Paul Pascoe, prices senior manager at Stats NZ. “By the last week of December, the pump price was 8.3% below the December quarter average.” 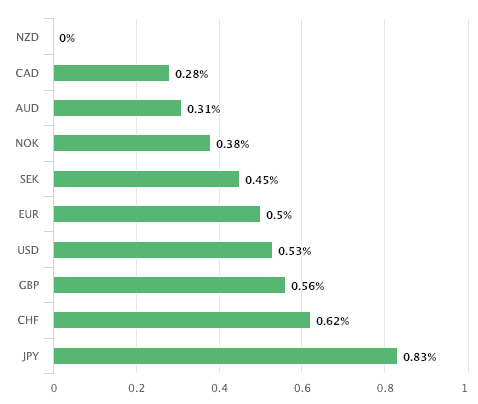 Above: The NZ Dollar outperformed all major rivals in the wake of the inflation data release.

"Wow! I always admit it when I’m wrong – do you mind if I admit it when I’m right, too? I said on Monday that I thought the New Zealand CPI figures would be the catalyst for some profit-taking on NZD shorts," says strategist Marshall Gittler with ACLS Global. "In fact, inflation came out a bit higher than expected. NZD jumped!"

Gittler does however caution the rally may not have that much further to go however "because while it makes a rate cut less likely, it hasn’t made a rate hike more likely".

According to market pricing quoted by Gittler, the odds of a rate hike in New Zealand this year are still only 1.0% while the odds of a cut are 18.6%.

Liz Kendall, Senior Economist at ANZ in Aukland says going forward, we may see some further uplift in domestic inflation in the short term.

However, Kendall adds: "it is becoming increasingly apparent that economic momentum is now fading, with forward-looking indicators pointing to further gradual petering out. Resource pressures look to be past their peak, meaning a durable lift in domestic inflation will be harder to achieve. Add global risks to the mix, and it paints a picture of medium-term inflation that in our view looks set to disappoint."

"The RBNZ’s focus is forward-looking and it is the durability of stronger inflation that matters," adds Kendall. ANZ expect to see a more dovish RBNZ in time, a view we interpret as being inconsistent with a stronger New Zealand Dollar longer-term.

"Without any chance of a hike while much of the rest of the world is normalising policy, NZD has only limited support against the background of a slowdown in China, far and away its largest export market," says ACLS Global's Gittler.

Global market conditions will also play an important part in the NZ Dollar's evolution for the rest of the week, with the currency highly sensitive to developments in the Chinese economy and U.S.-China trade war headlines.

On Monday, the International Monetary Fund cut its 2019 and 2020 global growth forecasts, citing a bigger-than-expected slowdown in China and the Eurozone, and said failure to resolve trade tensions could further destabilise a slowing global economy.

Growth in China last year was the slowest since 1990 and is set to weaken further this year before stimulus measures start to kick in.

Investors are hoping for a breakthrough in U.S.-China trade talks, but a report by the Financial Times that the United States had rejected China's offer for preparatory trade talks dampened risk sentiment overnight, though it was later denied by a White House adviser.

Regardless, the two sides are talking, and both sides are under pressure from a political standpoint to deliver a deal, we expect the NZ Dollar to benefit should further progress be made.