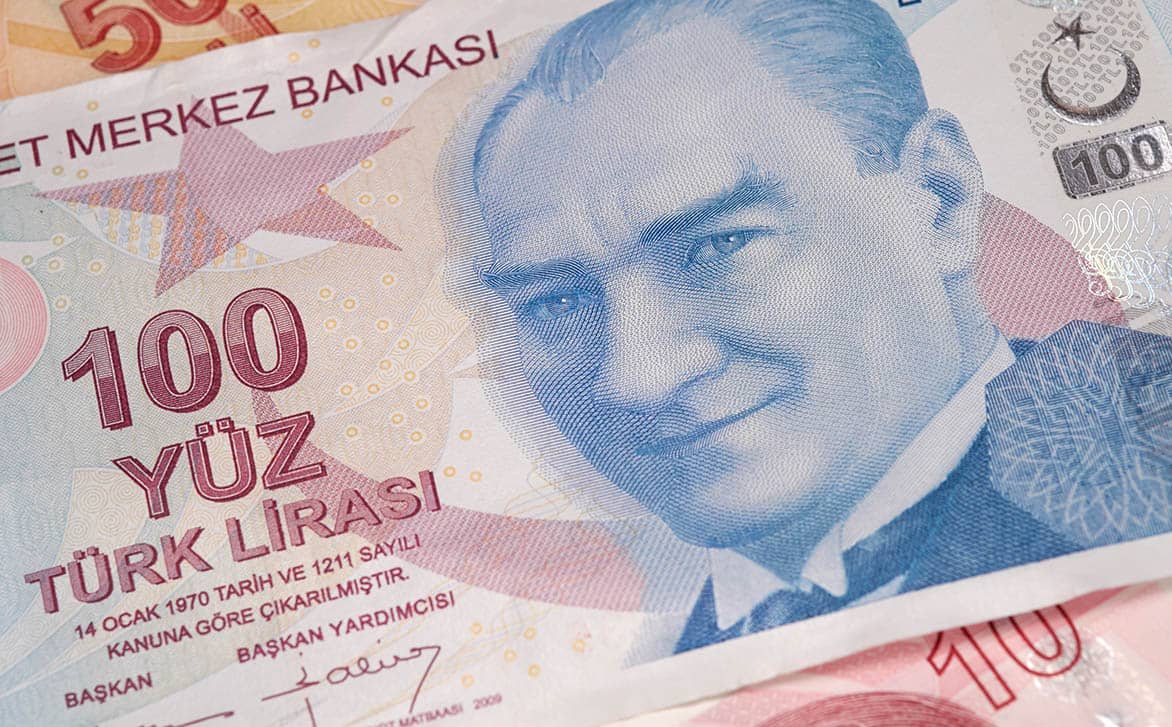 The Turkish Lira rallied strongly against all counterpart currencies in the mid-week session but outlook for it is hinged on the interest rate policy of the Central Bank of the Republic of Turkey and there remains a risk of further interest rate cuts being announced in the months ahead.

Wednesday’s rally by the Turkish Lira unwound around half of Tuesday’s almost stratospheric losses against Dollar, Pound, Euro and other currencies with no obvious catalyst for the move.

The Pound to Lira exchange rate was down close to five percent while losses in USD/TRY surpassed -6% as the dust appeared to settle following an ugly Tuesday sell-off that led Turkey’s central bank to describe the currency market as “unrealistic and completely far from economic fundamentals.”

“This statement was required because of the need to warn our companies and citizens against possible losses by trading at values that are completely far from economic fundamentals in extremely volatile market conditions. It is announced to the public with respect,” the CBRT had said late on Tuesday.

The Lira fell by double-digit percentages in just Tuesday’s trading alone, lifting GBP/TRY, USD/TRY and other similar exchange rate to gains of more than 60% for 2021 in what appeared to be a market response to remarks made by President Recep Tayyip Erdogan. 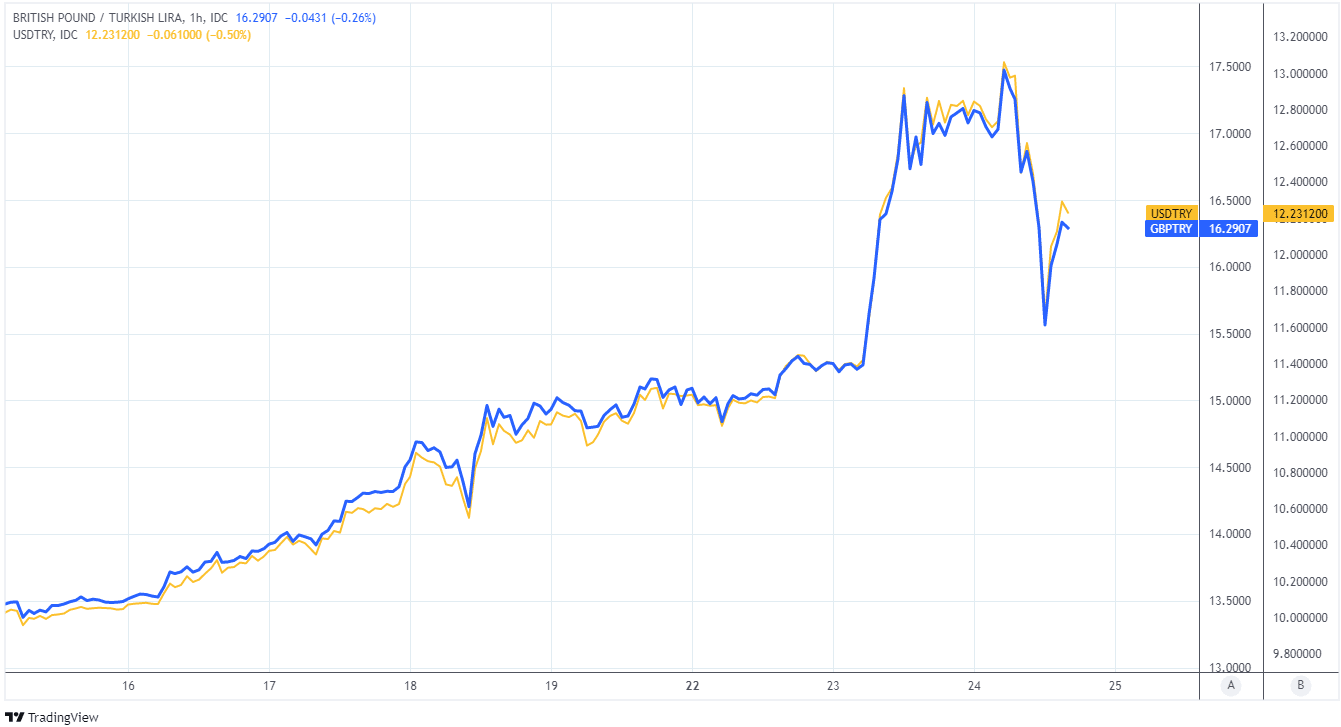 Above: GBP/TRY and USD/TRY shown at hourly intervals.

President Erdogan’s Tuesday remarks had suggested that he could be likely to continue pressuring the Central Bank of the Republic of Turkey to lower its interest rate even after the bank cut its benchmark for borrowing costs from 19% in early September to 15% in November.

“The main reason for the ongoing selloff in the lira is a substantial fall in real rates in recent weeks, far into negative territory. Last week’s policy rate cut and the rally in USDTRY since then have pulled down the real rate further “from both ends”: the nominal rate has fallen and expected inflation has risen,” says Nimrod Mevorach, a strategist at Credit Suisse, writing in a Wednesday note to clients.

“In the absence of a policy response that would support the lira, a negative feedback loop has emerged, whereby upward moves in USDTRY leads to further falls in the forward-looking real interest rate which in turn feed back into further lira depreciation pressure,” Mevorach said, before warning clients that USD/TRY could potentially rise as far as 14.00 in the months ahead.

Interest rate cuts in Turkey are the result of President Erdogan’s unorthodox theory that attributes high levels of inflation to elevated interest rates and vice versa, although inflation rose to almost 20% in Turkey during October.

Ankara’s approach toward interest rates is the polar opposite to that adopted by a majority of central banks out there and has been a major inducement of speculators betting against the Turkish currency, which is close to having its worst year on record.

Typically central banks lift interest rates in order to reduce inflation and cut them wherever there is a need to lift inflation, with underlying thinking being that such changes in borrowing costs can influence price pressures by either stimulating or simply curbing economic activity.

“Given that there has been no shift in the communication from Turkish policymakers, our base case forecast continues to envision additional rate cuts in December and in 2022. We recognise that this could add to pressure on TRY and are conscious that in the past, the bank has ultimately responded to currency instability by swiftly hiking rates. This could happen again,” says Melis Metiner, a CEEMEA economist at HSBC.

The CBRT attributed its November decision to cut the cash rate to lingering downside risks to Turkish and global economic activity that are connected to the coronavirus, and dismissed rising Turkish inflation as the result of supply side factors including changes in international commodity and food prices. 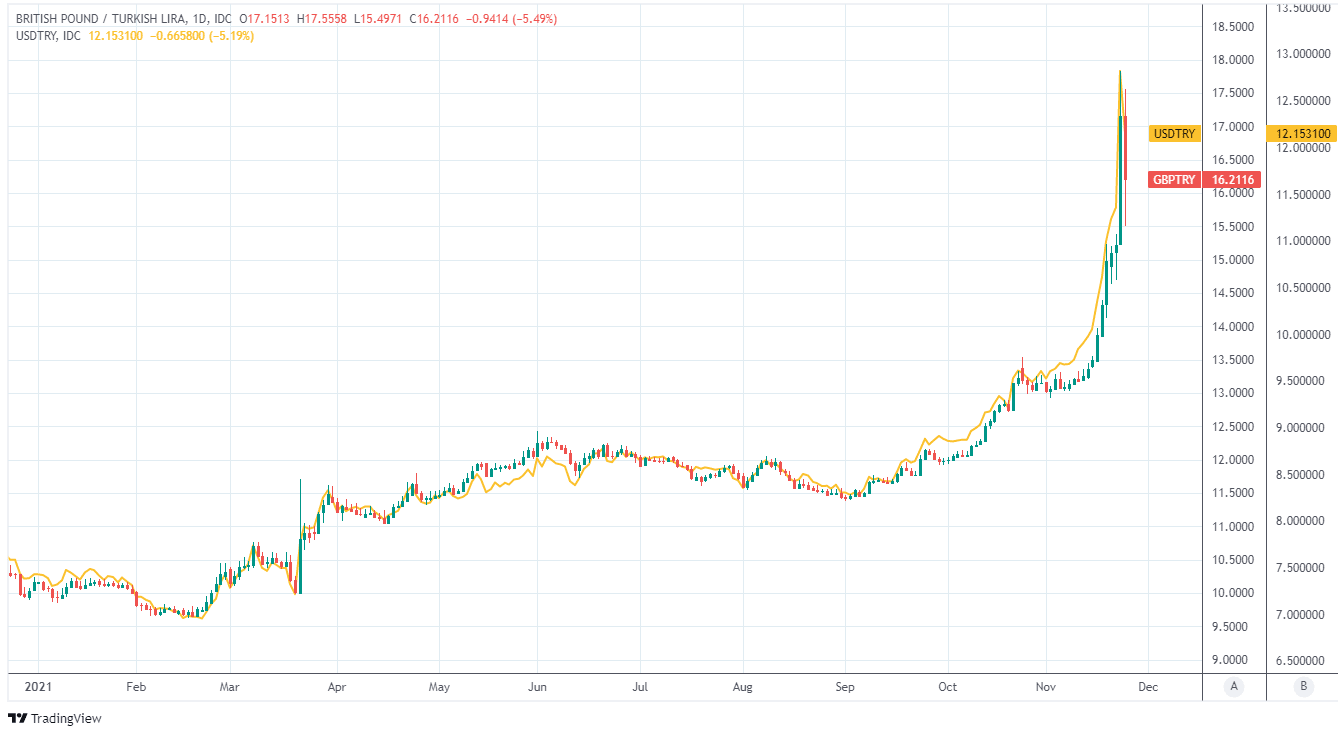 Above: GBP/TRY and USD/TRY shown at daily intervals.