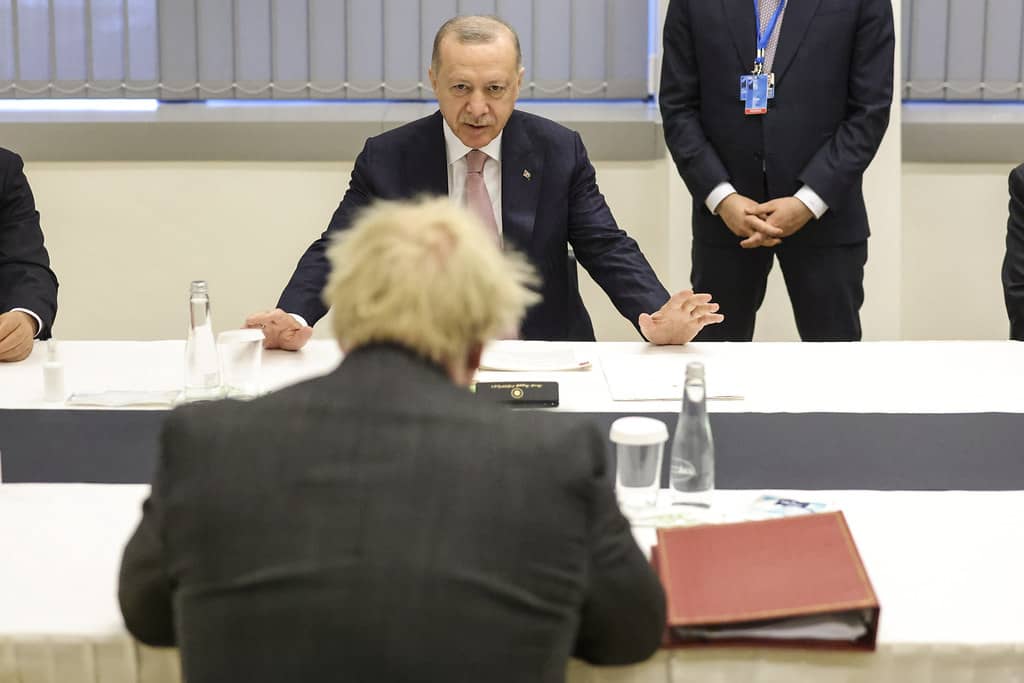 The Lira sank to new historic lows this week after statements made by President Recep Tayyip Erdogan triggered stratospheric losses that have taken 2021’s increases in GBP/TRY and USD/TRY close to 70% and are threatening to burden the Turkish economy with painfully high inflation rates.

Turkey’s currency was on course for its worst year on record Tuesday after falling by a double digit percentage following President Erdogan’s suggestion that he could be set to go on pressuring the Central Bank of the Republic of Turkey to continue lowering its interest rate.

The CBRT has cut its cash rate three times in recent months, taking it from 19% in September to 15% in November in monetary policy decisions that many analysts have said were likely the result of Ankara’s lobbying, with each triggering hefty losses for the already heavily depreciated currency.

“The rug is pulled fully from under the TRY unless the central bank regains a bit of control in Turkey, which governors have only succeeded with temporarily through Erdogan’s reign,” says Andreas Steno Larsen, chief FX strategist at Nordea Markets.

“It is hard to imagine a scenario in which TRY turns into a good fundamental case as long as Erdogan effectively runs monetary policy,” Larsen said in a Thursday research note. 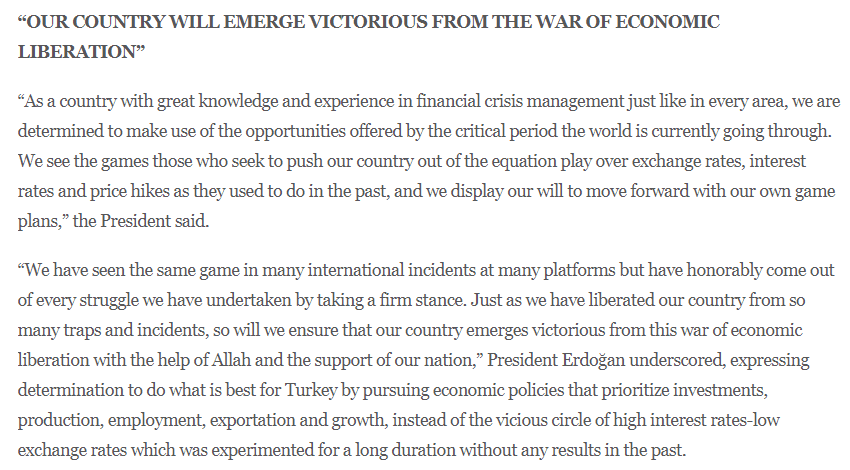 President Erdogan’s remarks to local press following a November 22 cabinet meeting were similar to statements reported to have been made last week and have been widely cited as the driver of the Lira’s latest leg lower.

"Turkey’s currency crisis – the lira is down another ~11% against the US dollar today, and ~35% in two months – is now reaching a scale where it raises the question of how badly it will affect other economies and financial markets," says Jonas Goltermann, a markets economist at Capital Economics. "Overall, our view is that the risk of direct contagion from Turkey looks limited, but that the global backdrop for emerging markets is worsening."

Earlier declines by the Lira were mild in comparison to the latest unravelling, which some analysts have said is so severe that its impact on inflation and the Turkish economy could ultimately force the CBRT to reverse course by raising interest rates sharply in the months ahead.

“While all bets are off (and our short- as well as medium-term USDTRY forecasts are heavily lagging behind spot levels), we continue to believe that the intensification of the lira crisis will not be sustainable for long,” says Cristian Maggio, head of portfolio strategy at TD Securities, in a research note.

Maggio and the TD Securities team told clients on Tuesday that if the CBRT abandons its pursuit of lower borrowing costs then the Lira could potentially begin to stabilise, although they acknowledged that it could be some time before this happens if it happens at all. 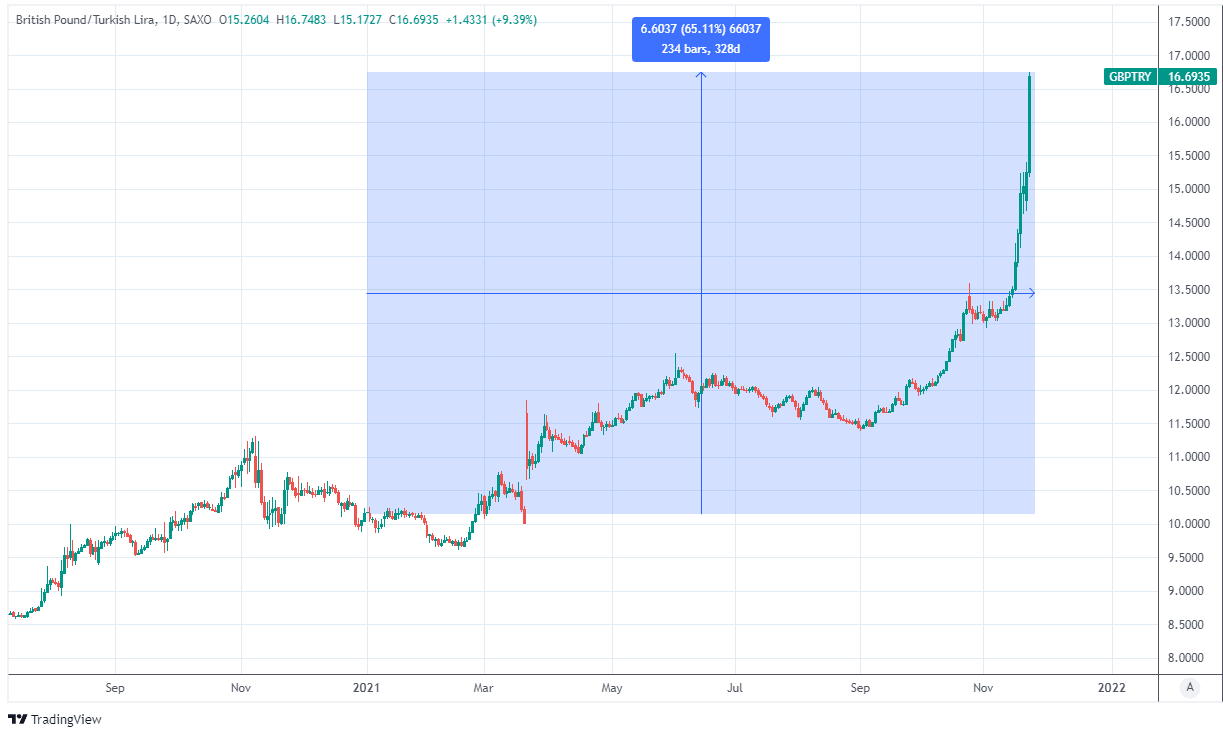 Above: GBP/TRY shown at weekly intervals with measurements of 2021’s increase.

Recent interest rate cuts in Turkey are the result of President Erdogan’s unorthodox theory that attributes high levels of inflation, which came close to 20% in Turkey during October, to elevated interest rates and vice versa.

“In contrast to other EM central banks who are ramping up rates to fight high inflation rates – Turkey’s policy easing magnifies the risks for TRY. Low FX reserves accompanied by mounting short-term debt will make it even harder for Turkey to fight capital flight,” Nordea’s Larsen said on Tuesday.

Ankara’s approach toward interest rates is the polar opposite to that adopted by a vast majority of central banks out there and has been an instrumental inducement for speculators betting against the Lira.

The Lira’s depreciatory spiral has been ongoing for almost as many years as President Erdogan’s tenure in Ankara and had lifted the USD/TRY rate by a similar degree to GBP/TRY for the year by Tuesday, although even at these levels there is little appetite for the currency among analysts and traders.

“We are trading 12.50 now, but it was 13.30 when I started typing this. Mamma. A few people asked if that means it’s time to take the other side. No,” says Brent Donnelly, president at Spectra Markets and a veteran currency trader, referring to USD/TRY.

“The pattern is generally a bit of a pullback for a week or two, then continuation higher. But nothing worth trading. Too hard to risk manage,” Donnelly wrote in a market commentary on Tuesday. 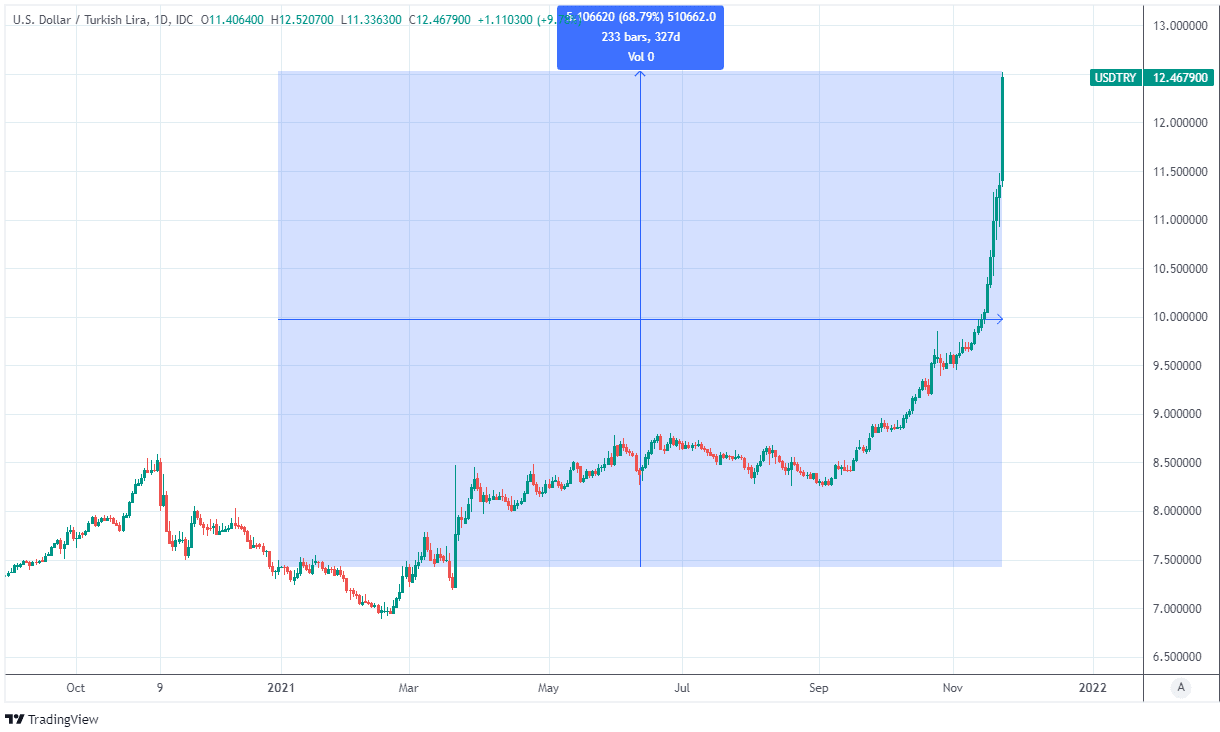 Above: USD/TRY shown at weekly intervals with measurements of 2021’s increase.