The UK economy is tipped to grow by a consensus-busting 2.0% in 2018 say Capital Economics who maintain their positive approach to the British Pound.

Capital Economics - the independent economic research organisation - have confirmed they remain one of the more optimistic group of analysts when it comes to the outlook for both the UK economy and the Pound.

Analysts have confirmed Sterling is to rise against both the Euro and US Dollar later this year thanks largely to stronger UK economic and wage growth rate which take the Bank of England by surprise and prompts it to raise interest rates faster than the market expects.

Capital Economics warned that fellow researchers were being too pessimistic towards the UK economy and the Pound in the wake of the June 2016 and opted to maintain an optimistic forecast profile. The subsequent performance of both the economy and currency have proven this call to be correct; and we therefore close attention to what this team have to say.

“We think the appreciation of the Pound since October has some room to run. Indeed, our expectation of [economic] growth of 2% or so this year, compared to the notably gloomy consensus forecast of about 1.5%, points to an appreciation of sterling ahead,” says Jonathan Loynes, chief economist at Capital Economics.

This update may provide reassurance to Sterling bulls and UK economy-watchers, both of whose fortunes have taken a turn for the worse in February, as economic and Brexit-related uncertainty returned to haunt the British currency.

After all, in little more than a fortnight Sterling has gone from hero to near-zero, rallying throughout January when investors were happy to bet a Brexit deal on transition was in the bag and the economic outlook picking up, only to fall in February as reality returned to the proverbial stage. 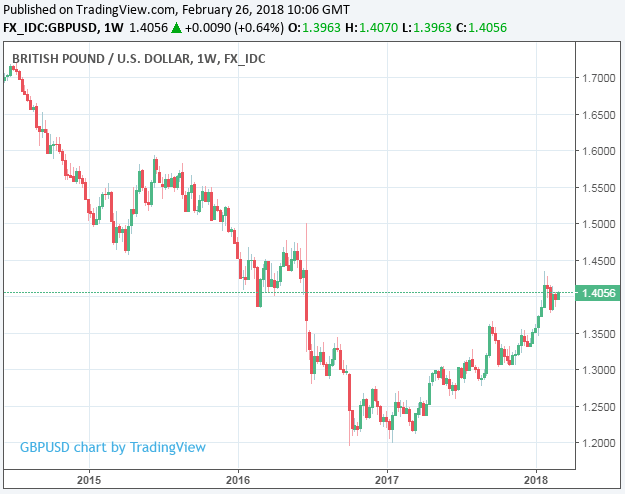 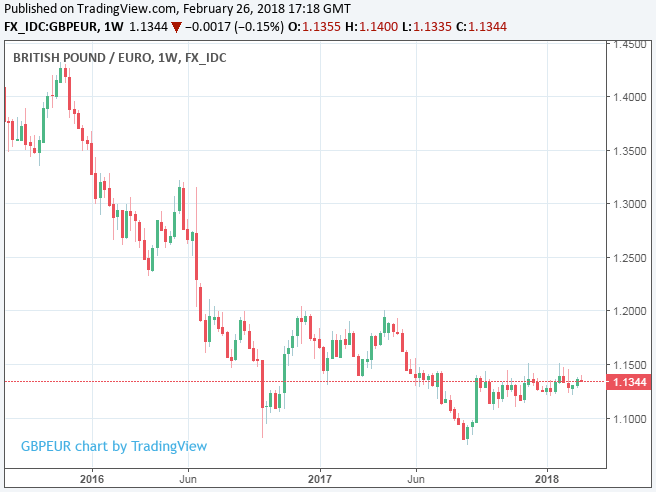 As it turns out, a deal to enable a smooth exit from the EU is far from in the bag and the economy hasn’t quite picked up to the extent many thought it had. In fact, UK growth slowed toward the end of 2017 and may have slipped a touch more at the start of 2018.

“The downward revision to Q4 GDP growth from +0.5% to +0.4% – coupled with an upward revision to Q3’s expansion – meant that the economy lost momentum towards the end of last year, rather than accelerated as previous estimates had suggested,” Loynes writes, in a recent note.

This means the UK economy regained lost momentum between June and the end of September 2017, quite sharply, only to lose steam toward the end of the year. A slowdown in household spending growth, a rise in imports and an outright fall in exports were behind the fourth quarter deceleration. 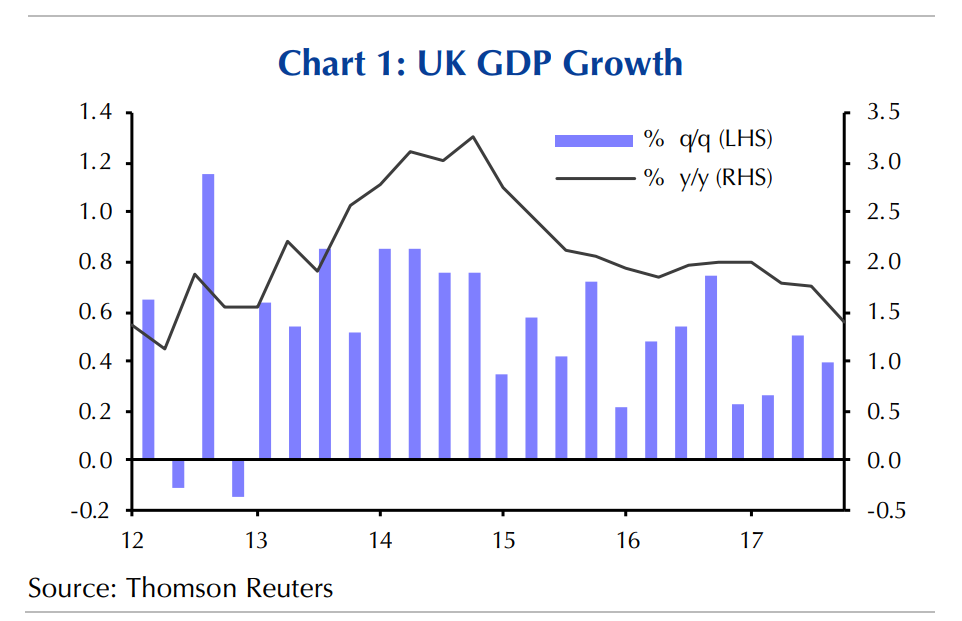 But for Capital Economics, signs suggest economic growth will pick up going forward.

“A closer look at the Q4 GDP figures reveals some rather less discouraging signals. For a start, as well as the negative impact on exports from the volatile valuables component, growth was also depressed by several other developments which might prove to be temporary,” says Loynes.

Loynes flags the closure of a key North Sea oil and gas pipeline, the Forties Pipeline, late last year as one adverse influence on GDP that should prove temporary. Another temporary factor came in the form of an increase in private sector inventories.

“Given the softness of household spending growth, it is hard to see how imports can carry on growing as quickly as they did in Q4. And more importantly, the various survey measures of export orders still point to a further substantial pick-up in the growth of actual export volumes over the coming quarters,” Loynes notes.

Meanwhile, investment in fixed assets across the economy rose by almost 4% during while business investment growth came in at a healthy 2.2%, providing some offset to the unfavourable import-export activity and the fall in industrial production resulting from the Forties closure. 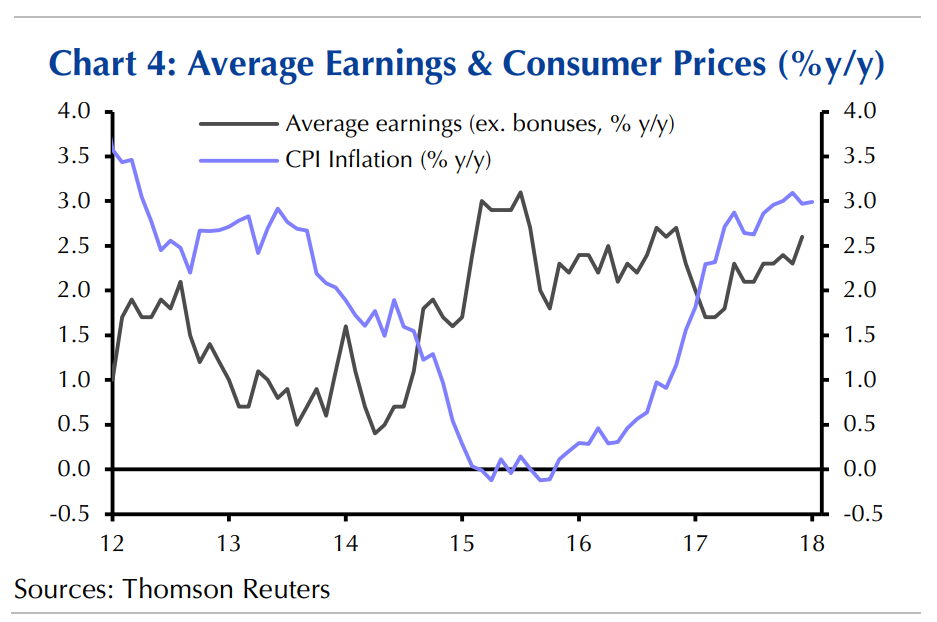 “With inflation likely to fall further in the coming months as the inflationary impact of Sterling’s fall fades, and average earnings growth possibly rising further, the squeeze on real earnings growth may be over fairly soon,” Loynes adds.

UK inflation rose above 3% last year and held at 3% during January, thanks largely to the post-referendum fall in Sterling that has made imports more expensive to buy and pushed the Bank of England into its first interest rate rise for a decade.

Higher inflation has also reduced the value of output produced by the economy, resulting in slower “real GDP” growth during 2016 and 2017. If inflation falls over the course of 2018 and wages rise, which Capital Economics predict they will, it would automatically boost UK growth. 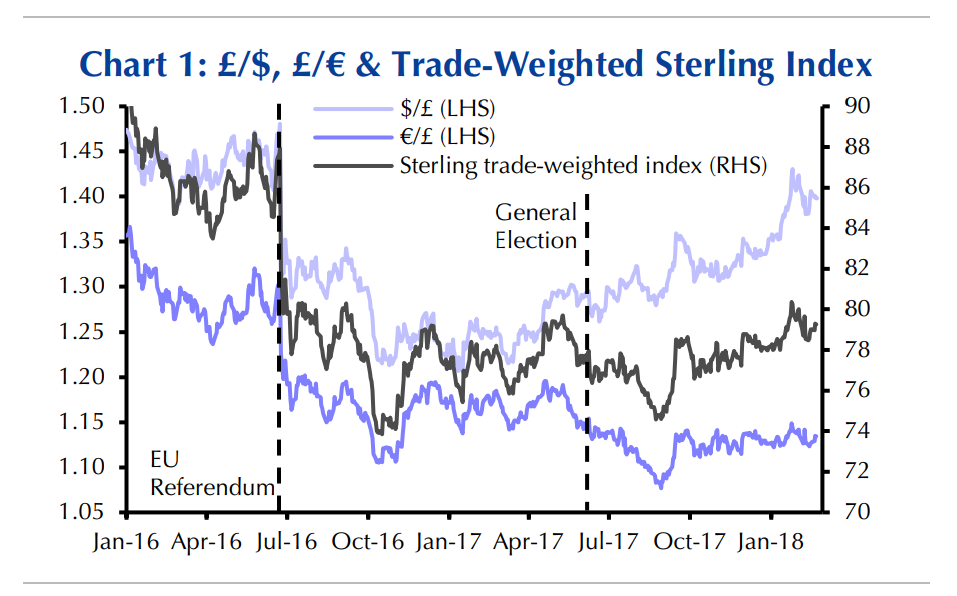 “Overall, then, while the latest data have hardly represented a ringing endorsement of our above consensus forecast for UK growth this year, it is far too early to throw in the towel,” Loynes remarks.

Capital Economics have been forecasting a pickup in UK economic growth, to 2%, in 2018 at a time when most economists are predicting a slowdown in GDP growth, from 1.7% to around 1.5%.

Stronger economic and wage growth will have knock on effects for the Bank of England and the Pound.

“CPI inflation is likely to fall back this year. Nonetheless, the MPC is keen to return interest rates to a level from which they can be substantially cut in response to a future downturn,” says Loynes. “With the labour market close to capacity and economic growth, in our view, likely to surprise the Bank of England to the upside, interest rates could rise faster than investors expect.”

Capital Economics forecast the Bank of England will raise the Bank Rate three times in 2018, with the first hike coming in May and the final increase coming in the fourth quarter, which should leave the cash rate at 1.25%.

This is a far more aggressive path of interest rate rises than most other economists are forecasting, while market pricing suggests only one interest rate rise is a certainty in 2018 which is most likely to come in May.

Higher interest rates tend to make for a stronger Pound as the relative attraction of UK interest rates attracts inflows of foreign exchange, which boosts demand for the Pound.

This is partly why Capital Economics predict the Pound will rise to 1.45 against the Dollar by end-2018, while the Pound-to-Euro exchange rate is forecast to assail and hold the 1.16 threshold.

Much of the upside for Sterling will be the result of markets adjusting to the new BoE interest rate path, as investors currently expect only one rate rise increase, around May, while analysts are still divided over whether the BoE will manage a second.