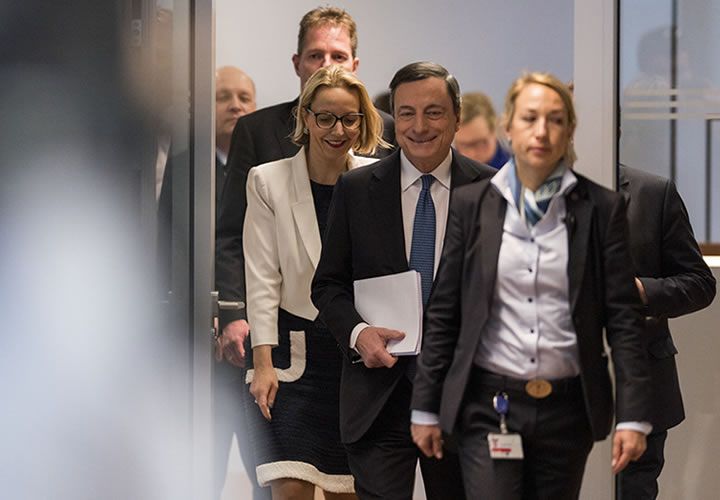 European Central Bank President Mario Draghi woke the foreign exchange markets from their recent slumber as he pointed to a long-anticipated shift in policy over coming months.

Draghi told an audience in Sintra, Portugal, that while stimulus is still needed to support the Eurozone economy, the scale of that support is not as large as it once was.

“It was his shift of emphasis from ‘very substantial’ to ‘considerable’ where stimulus was concerned that really got everyone talking,” says Chris Beauchamp at IG in London. “This Delphic hint that a reduction in QE was possible was sufficient to send the Euro higher.”

When it comes to central bankers, subtlety is key.

#Draghi shaking up markets this morning => comments on noise in core #inflation and why economy could cope with tighter monetary policy pic.twitter.com/JkSyHdv9nB

The promise of higher interest rates in the Eurozone is positive for the Euro in that it suggests money will now start flowing into the Eurozone.

European investors will also see less incentive to export Euros out of the Eurozone into global assests  thanks to record-low borrowing costs introduced by the ECB.

We warned in an article published at the start of the week that the Euro could be in for a period of appreciation as the Bundesbank's Jens Weidmann signals the Germans are not in favour of extending the ECB's quantitative easing programme which keeps Eurozone interest rates at supressed levels.

Could we be witnessing the start of a more sustained period of Euro appreciation?

Draghi, however, added that inflation remains muted and that it not yet durable or self-sustaining and we reckon a deep fall in inflation will put this play at risk.

Paresh Davdra, CEO of RationalFX, believes those watching the market should be wary of the Euro's ability to follow through on today's strength.

"Whilst some investors may take this as a sign of an end to the long running policy of quantitative easing, Draghi remained dovish, pointing out that despite optimism, a cautious monetary policy is still advised. Also notable is the fact that the Euro’s rise comes in the absence of a strong Dollar today. Analysts will be watching the Euro closely to see if its gains hold,” says Davdra.

Analysts at UniCredit Bank AG say they believe the conditions are now right for the ECB to announce the taper at their September meeting.

Tapering refers to the process whereby the ECB exits its extraordinary quantitative easing programme that has seen it purchase billions of euros worth of government and corporate debt.

"Today Draghi moved his first step towards indicating that ECB monetary policy will become less accommodative in 2018. Unless an unexpected shock materializes, a formal tapering announcement is likely to come at the ECB monetary policy meeting scheduled on 7 September," says Marco Valli at UniCredit's Milan branch.

UniCredit think the ECB will try to go for a slow tapering path in 2018, envisaging €40bn of monthly purchases in 1H18 followed by a further reduction to €20bn per month in 2H18, with QE drawing to a close at the end of next year.

Weakness Could be Limited by Technical Support

Pound Sterling has found its feet at the bottom of a six-month long trading range against the Euro.

GBP/EUR has stalled in its downtrend at the same level as it did in January, at the key 1.1280 lows which suggests solid demand is found at these discounted levels.

Previous lows can provide a supportive level on charts where the exchange rate is more likely to find its footing, as has happened with the January lows on GBP/EUR.

The pair has touched but not pierced below the 1.1280s on three consecutive days (circled). 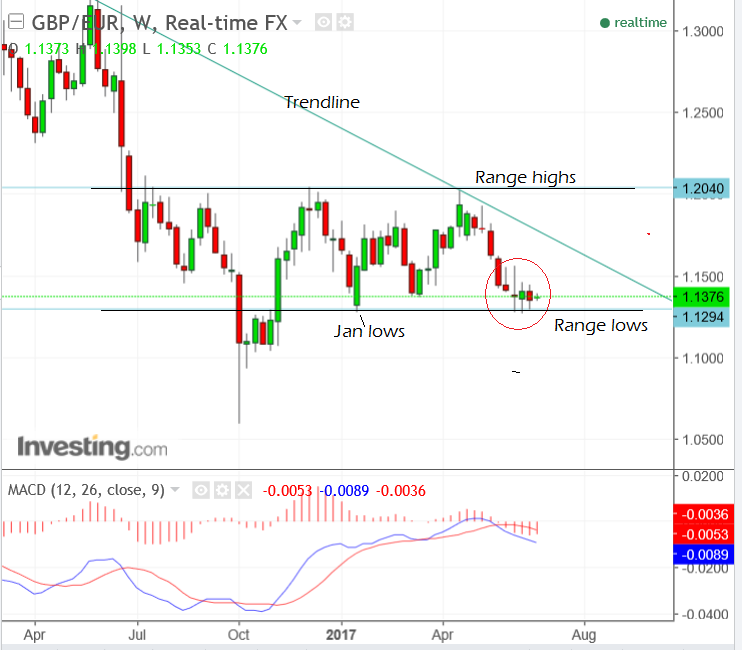 The Pound’s resilience can be put down to easing political risks after Prime Minister Theresa May struck a deal with the head of the DUP Arlene Foster which now gives her a working parliamentary majority.

This week the conservative party will attempt to form the next government when MP’s vote on the Queen’s Speech.

If they are successful Theresa May will form the next government and the Pound will gain in value at the fall in uncertainty.

Analysts at Associated Foreign Exchange (AFEX), however, do not expect the Pound to gain and are increasingly bearish about the prospects for the pair.

Although acknowledging GBP/EUR’s range-bound behaviour, they do not think the pair will continue sideways and instead expect a breakdown.

To change their view to one that is more bearish, AFEX would need to see a break above 1.5550/60.

“Only above 1.1550/60 resistance will meaningfully postpone this awaited Sterling sell-off.”

However, their assessment on the currency is based on studies of the UK's trading account with the rest of the world.

A good deal of analysts believe the Pound to be undervalued, but UBS argue that based on the country's Current Account deficit, more weakenss is actually likely.

The Current Account is the UK's bank balance with the rest of the world - because the UK imports more than it exports the Account is in deficit.

To balance the account the country relies on the inflow of investor capital, but were this to dry up the Pound would have to fall to compensate for the deficit in trade.

The Current Account (C/A) has narrowed over recent months due to the Pound weakening and an increase in inflows from UK-owned global assets, which have appreciated due to global reflation and growth, however, UBS say that this is at risk due to Brexit uncertainty.

This is due to the high financial sector services export surplus component of the C/A, which is under threat from losing it EU passporting rights if there is a Brexit.

Even global reflation which had brought a lot of inflows and increased demand for Sterling is declining.

“GBP is quite expensive even in light of the recent C/A improvement – stress-testing the current account to Brexit risks as well as risks from fading global reflation implies significant downside risk for Sterling,” says UBS's Themos Fiotakis.

They see EUR/GBP rising to 0.92 by year end on the back of Sterling weakness.