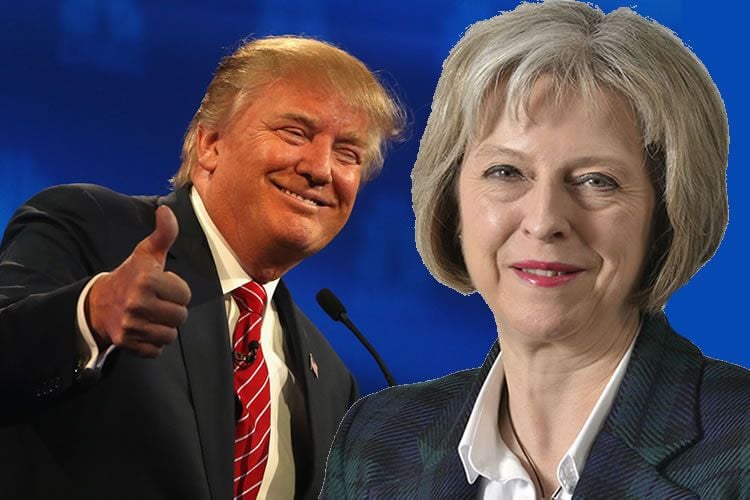 Pound Sterling traded to its best levels in weeks against most global currencies as markets anticipate higher inflation in the UK and the potential for improved economic ties between the US and UK.

The GBP to EUR exchange rate delivered its best two-week run in eight years with a rally that’s powered it to its strongest in five weeks.

The UK currency is at a six week high against the Dollar.

The prime reason why the British Pound has surged lies with a sudden rise in developed market bond yields, particularly for bonds that expire over a long-term timeframe.

Investors are demanding a premium for longer-dated debt as they anticipate greater inflation, largely on the back of Trump’s promised fiscal stimulus agenda.

That the Pound was already notably undervalued when compared to bond yield differentials has caught market attention and they are quickly racing to reprice the currency higher.

However, a shifting geo-political landscape now that Donald Trump has won the US presidency is another reason investors have turned less pessimistic on the Pound.

"Watch for a US / UK trade deal, President-elect Trump's astonishing victory in all probability will give UK pro-Brexitors an 'ace up their sleeve'", says Peter Rosenstreich, head of market strategy at Swissquote Research.

Current negotiations between the EU and the UK have been relatively deadlocked with both parties’ leverages being relatively balanced.

That is because in reality both economies need each other equally (despite occasional hostile rhetoric).

“Yet, the scale could be tipped in the UK’s favour with the inclusion of outside trade agreements,” says Rosenstreich.

What is particularly positive for future UK-US relations are suggestions that Trump craves another Reagan-Thatcher ‘Special Relationship’ with May.

Trump told Prime Minister Theresa May in a phone call following his victory that the U.K. is a “very, very special place for me and for our country”.

Trump added that it would be “the greatest possible honor” to host her in Washington “as soon as possible.”

During the 1980s Reagan and Thatcher formed one of the closes bonds between two western leaders in the 20th century as they both engendered a similar outlook on foreign affairs and conservative economics.

It is hard to look like an outlier if another nation pursues similar policies and for a post-Brexit Britain and Tump-lead United States, this could suit both leaders.

If we were to see a Reagan-Thatcher redux we the UK and US would once again benefit from a relationship desrcribed as being, "warmer personally and closer ideologically than that between any previous American president and British prime minister," according to Geoffrey Smith, author of Reagan and Thatcher.

The UK will need a strong trading partnership with the US to help offset any potential downgrade in trade with Europe.

The US is the UK’s biggest export market outside of the EU, with some 20% of UK goods heading across the Atlantic.

"I think the Pound could be particularly positive on a Trump presidency because he has warmly extended the hand of friendship to Theresa May and wants to see her first when he actually takes up the Presidency in Jan," says Kathleen Brooks at City Index. "This opens the door to an earlier trade deal with the US, compared to what Obama offered, which could make our economic prospects outside of the EU much brighter."

President Obama, prior to the EU-referendum, indicated that the UK would not get preferential treatment and would have to go to the back of the line.

“How things have changed. On the campaign trail Trump was extremely supportive of Brexit and quick to provide himself accolades for calling the historical outcome. In addition, consistently drawn parallels between his campaigns and the Brexit referendum indicate deep support for UK independence,” says Rosenstreich.

Trump’s comments that Britain would not be “at the back of the queue” indicate that he would be willing to fast track a UK trade deal.

"Mr Trump’s favourable view of Brexit, and assertions that the UK would be at the front of the queue when it comes to the negotiations of new trade deals, is perhaps some silver lining for UK policymakers," says Ruth Gregory at Capital Economics.

Sources close to the UK foreign secretary told the BBC the two men had spoken at about 2100 GMT for ten minutes about building a strong UK/US relationship.

The BBC understands it was Mr Pence's first call to an overseas politician.

“What a Trump presidency will look like is unknown, however we suspect that there is enough evidence to predict a quick trade deal will be on table for the UK which they can use to leverage in EU negotiations," says Rosentreich.

Swissquote cite the following reasons to believe such an outcome:

Firstly, the US president has significant influence over trade and with a republican house and senate could move without resistance.

Secondly, Trump bragged about his deal making prowess and will be eager to show the world. Thirdly, slightly anti-Europe comments on NATO and EU, suggest that the EU/US trade agreement will be challenging.

Finally, Trump more than anything likes to be right. As the US president Trump is in a unique position to define the direction of Brexit. We remain constructive on GBP in the near term as we don’t anticipate political comments to indicate a hard-Brexit.”

India and China Also in the Frame, but Progress Here will be Slow

It's not just the USA that the UK will be seeking to develop stronger trading relations with it would appear.

Britain this week held talks with China and India this week to discuss post-Brexit investment and trade ties.

The move makes sense as these two nations boast the lion's share of global economic growth at present.

Access to these rapidly growing markets would make sense for Britain in a post-Brexit world, particularly as the country really has room to grow exports to these nations.

In fact, the share of international trade with India has been falling over recent years.

Because of the fundamental differences in the stages of development between the UK and the two Eastern superpowers a trade deal will be extremely hard to deliver.

But calls for the UK to accept more skilled Indian workers and proposals by UK business leaders this week for a London-only visa have called into question the government’s stance on curbing net migration and will likely limit any notable success in improving trade relations with these two emerging economies.

Elsewhere, Merkel’s comments, that there will be no negotiations with the UK before Article 50 has been triggered, emphasises the uncertainty around whether last week’s High Court ruling will cause a delay to the start of the process.