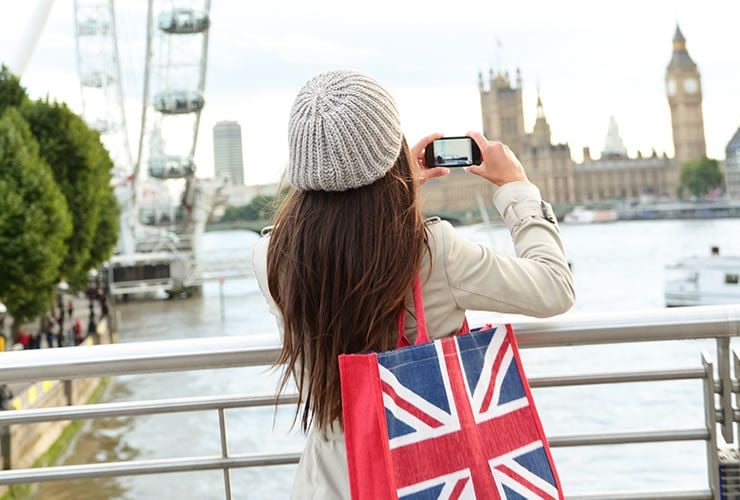 Pound Sterling remains highly vulnerable to political sentiment and the words of the UK Chancellor appears to have been the undoing of a recent relief rally in the UK currency.

The best way to approach the currency at present is to firstly accept it is now volatile by nature and secondly keep an eye on the speaking engagements of senior UK politicians.

As we note in this report, Prime Minisiter May caused volatility on Monday afternoon when she addressed Parliament. An even bigger move came less than 24 hours later when the Chancellor of the Exchequer Philip Hammond also briefed Parliament.

We were surprised by the extend of the move and note the majority of FX commentators we follow were also completely oblivious to what had happaned and were left scratching their heads as to the cause of the decline.

Hammond took questions in Parliament on behalf of the Treasury from mid-day - and as we can see Sterling subsequently took a nose-dive: 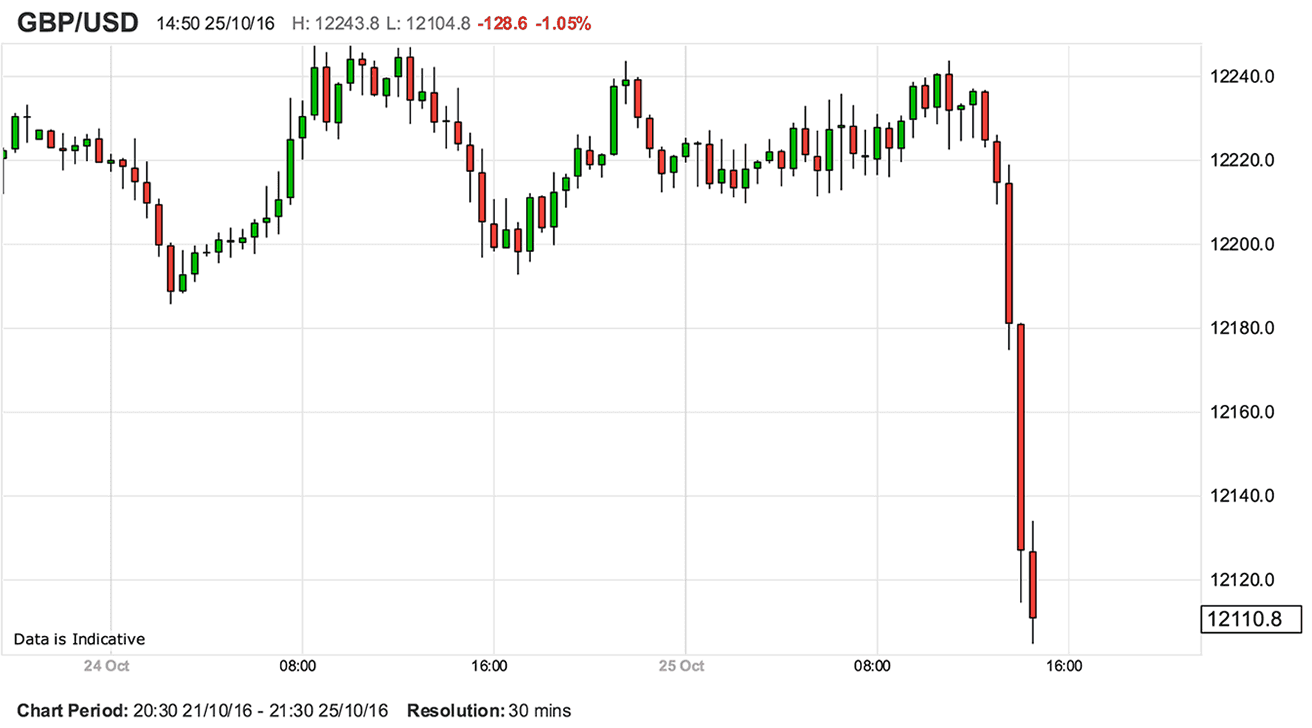 Hammond appeared to confirm the Government would be happy to see more quanitative easing in the future.

"The Pound dropped below $1.21 to the lowest level since the ‘flash crash’ earlier this month, as markets took note of Chancellor Hammond’s comment that he sees no reason to refuse a request by the BoE for more QE," says a client briefing from Lloyds Bank released on Wednesday.

So what exactly did Hammond say? He told Parliament the following:

"The application of monetary policy in the UK is independent of government.

"Monetary policy including quantitative easing have been highly effective in supporting the economy.

"Because of the fiscal implication of an indemnity for the Bank, quantitative easing packages have to be formally agreed by the chancellor. Although I cannot prejudge any hypothetical request in future, no request for quantitative easing has ever been refused, and I see no reason why circumstances would be different in future."

The call comes after, and in apparent contradiction to, Theresa May's soft-touch criticism of some of the Bank's policies which many to question whether the Bank's independence would be brought into question.

While the Bank is independent in its decision making, political pressure will certainly always be in the back of the minds of decision-makers, and on tight calls lingering criticism could swing a decision.

Hammond's backing is therefore significant in that it could see the Bank pull the trigger on further quantitative easing again in the future.

And more quantitative easing would certainly trigger another extended decline in the Pound.

EU to Force the UK into a Hard-Brexit?

The Chancellor was not done as he also told lawmakers that the EU may be politically motivated to give Britain a worse deal over Brexit.

“I would just caution you that looking at the economic arguments alone is to miss a very important point,” said Hammond.

This is in defiance of the sunny views held by pro-Brexiters that the EU would be inclined to offer the UK the best possible trade deal in order to satisfy their own economic objectives.

Furthermore, “there's a political debate going on here in Europe where European politicians are very conscious of the impact of Britain's departure on their political project.

“I don't think we can be certain that economics alone will dictate the course of this negotiation.”

This suggests that the UK Government could be resigned to the fact that it will get a deal that does not grant unfettered access to the single market.

It could also be used as the necessary cover to grab the full sovereignty it requires to keep a handle on immigration.

By accusing the EU of being politically motivated it could arguably be easier to sell a deal that does not offer full market access.

May Prompts Bout of Volatility

Theresa May confirmed to lawmakers on Monday 24th that her Government remained committed to seek full control of immigration policies in impending Brexit negotiations with the EU.

May was addressing Parliament having met the leaders of the UK's devolved administrations.

The reiteration of May's desire to seek full sovereignty will be taken by markets that the Government remains willing to cede full access to the EU single market, access of which requires the freedom of movement of EU citizens.

The Prime Minister also stood firm by her position that no negotiating positions would be made public ahead of the negotiations - something we see as being sensible; indeed we see a risk that markets are confusing hard-Brexit with hard-bargaining.

The leader of the Scottish Government, Nicola Sturgeon, confirmed May had not divulged any details concerning the UK's position in Monday's meeting between the PM and devolved administrations.

When May first made similar noises at the Conservative Party conference at the start of the month the UK currency tumbled to fresh multi-year lows againts the Euro.

However, Sterling then recovered the lost ground.

The Prime Minister announced there will be a series of Parliamentary debates on Brexit before and after christmas.

This could keep the Pound supported as it has been shown in the past that Sterling likes the idea of Parliament having a greater say on Brexit negotiations on the assumption that Parliament is inclined to lean towards a softer-Brexit.

Further, she said she remains acutely aware of how important the UK's financial services sector is to the UK and will seek the best possible deal to allow financial firms to trade with the EU.

But, it was the dismisal of talk of hard-Brexit that I think allowed Sterling to recover more than anything.

When opposition Labour's Andy Burnham accused May of "talking up" a hard-Brexit the Prime Minister responded:

"He talks about the hard Brexit that the government is going to take this country into. There is no suggestion of that whatsoever.

"(He) seems to think that all of these matters are binary decisions between either you are able to control immigration or you have some sort of decent trade arrangements, that is not the case.

"We are going to be ambitious for what we obtain for the United Kingdom and that means a good trade deal as well as control of immigration."

This confirms our view that there is a risk of markets confusing hard-Brexit with necessary pre-negotiation posturing.

There is thus the chance that weakness in the Pound is liited.

“A fast and imminent continuation of the bearish trend at this stage is unlikely because a lot of UK bearishness is already priced in the exchange rate,” says Olivier Korber at Societe Generale.

While Korber believes bouts of weakness are likely to be limited, others are not so sure.

“Risk is still on the downside against the backdrop of discussions regarding the right - or least harmful - approach to implementing the UK’s exit from the European Union. On the downside, a strong support can be found at around 1.18, while on the upside, the 1.24-1.2450 will remain the main resistance,” says Arnaud Masset at Swissquote Research.

While GBP has found support of late analysts at Scotiabank say they believe Sterling retains a weak undertone.

"The Pound’s modest stabilisation following the flash crash drop does not appear sustainable and we think the market showed the first signs of resuming its bear trend last week as the GBP slipped under support in the upper 1.22s," say analysts in a briefing note to clients.

Ahead, there is the release of UK GDP to look forward to.

While data is having little impact on Sterling these days it could bring about some stability.

Official growth figures for the third quarter are due on Thursday at 09:30 BST and we have seen consensus expectations amongst economists raised with the GDP readings expected to come in at 0.3% to 0.4%.

The data will capture the quarter after Britain voted for separation from the European Union.

“These estimates also allowed the Pound to maintain, if not extend, its rebound against the Dollar and the Euro, sitting just under $1.225 and €1.125 respectively,” says Connor Campbell at Spreadex in London.

Consensus forecasts shows that annual growth expectations for 2017 have moved gradually up to 0.9%, with a 0.7pp standard deviation.

"Should the data surprise to the upside, which many indicators have done in the wake of the June referendum, it would risk rewarding the pound with a short-covering rally. Still, festering concerns about the possibility of an economically-negative ‘hard’ Brexit in which Britain could lose access to its top trade partner, the EU, should keep the pound’s longer run negative bias intact," says Joe Manimbo, an analyst with Western Union.

Barclays are one of the big names who have revised higher their economic growth forecasts lately.

The bank has looked at soft and hard data up to September and conclude that growth will mostly likely average 0.2% q/q in Q3, 0.2pp higher than their previous forecast.

“Against this backdrop, we now expect the BoE to maintain rates at 0.25% in November and cut in February 2017 to 5bp. We also expect the MPC to confirm QE as it stands but we do not anticipate any insights into whether the MPC would support extending sovereign QE beyond March 2017,” say Barclays in a client briefing. 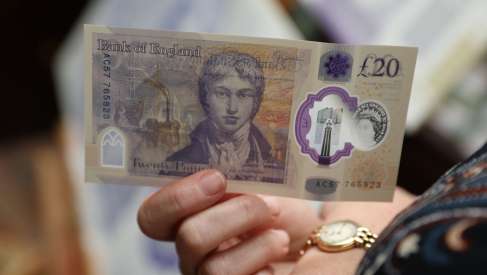 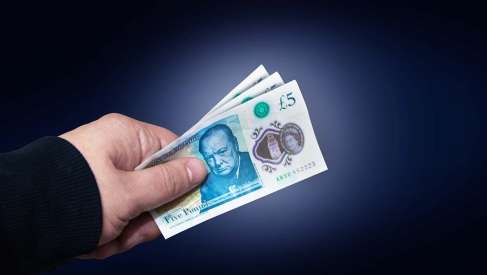