Pound Sterling has rallied back from steep losses so far in the final quarter but is likely to remain one of the big major currency underperformers once into the new year, according to the latest Goldman Sachs forecasts.

Sterling had risen against only four of 19 counterparts in the G20 grouping for the year on Tuesday and was carrying double-digit percentage losses against the same number including the Russian Rouble, Mexican Peso, Brazilian Real and U.S. Dollar.

Declines against the Swiss Franc and Canadian Dollar were also sitting at high single-digit percentages, however, while there were only two currencies against which the Pound actually managed to eke out noteworthy gains including the Japanese Yen and Turkish Lira.

This is all despite a sharp rebound from record lows in late September when financial markets protested the prior government's budget policies.

"Thursday’s budget served as the final step of a huge fiscal policy U-turn, which has significantly reduced the risk premium on UK assets. But we still expect Sterling to underperform in the near term as it absorbs the latest negative supply shock from energy prices," says Michael Cahill, a strategist at Goldman Sachs. 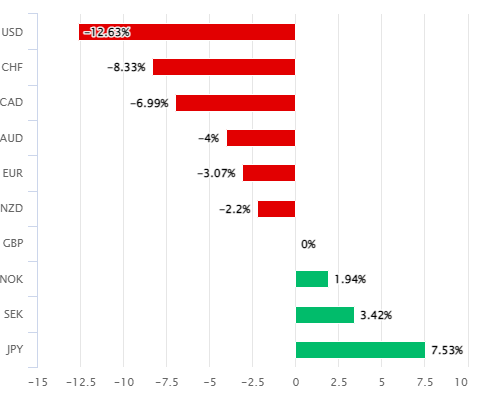 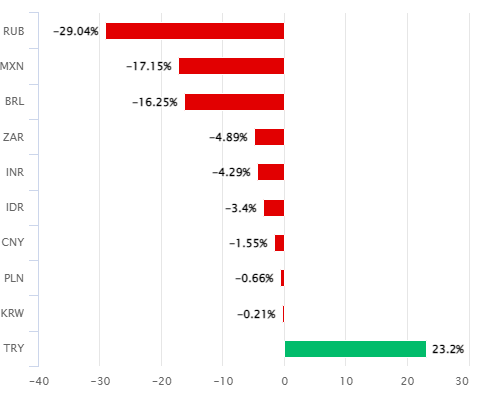 At the heart of this year's heavy losses for Sterling is a tripling of wholesale prices for mainly-imported energy goods resulting from UK and European attempts to move away from imports of Russian oil and gas without other alternatives or enough investment into their development.

This and the rising cost of manufactured goods is a big part of why the prices of imports into the UK have risen much faster and further than the price of exports, leading the overall trade in goods deficit to deepen throughout the year while driving a currency-negative deterioration of the 'terms of trade.'

"The UK faces a severe energy terms of trade shock but Brexit-related frictions are also weighing on the trade balance and contributing to a very tight labor market," Cahill and colleagues write in a year ahead research briefing.

"The UK is the only G10 economy where activity remains below its pre-pandemic level, and our economists expect negative growth in 2023, while underlying inflation is exceptionally strong and shows limited signs of coming down," they add.

It's not just the increase in import costs that has weighed on the Pound, however, because the UK has experienced one of the largest increases in inflation among G10 economomies as a result and this has driven the real or inflation-adjusted returns offered UK government bonds far below zero. 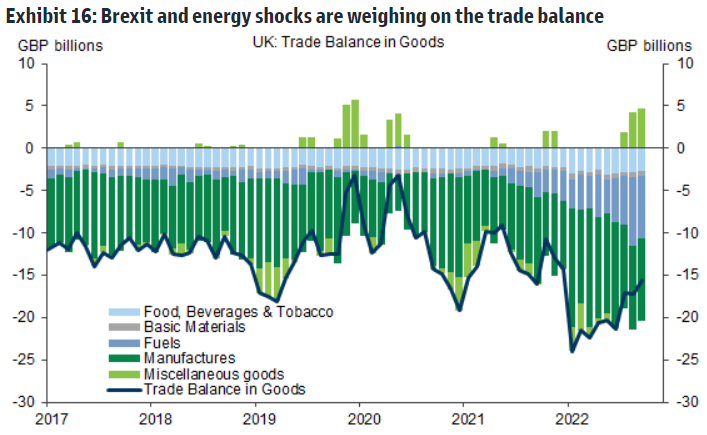 One other reason for why inflation-adjusted returns have fallen so far is a Bank of England (BoE) Bank Rate that has not kept pace with the increase in inflation and this has been a prominent gripe for the many analysts who've held bearish views on the Pound this year.

"Through this shock, the Bank of England has forecasted aggressive declines in inflation (despite upward revisions to near-term forecasts) and underdelivered on hikes as it strikes an increasingly fine balance between supporting economic activity while taking some action to resist higher inflation," Cahill and colleagues say.

The energy supply shock is unlikely to dissipate any time soon and it remains to be seen how quickly UK inflation rates will fall back to the Bank of England's 2% target, hence why the Goldman Sachs team forecasts another year of underperformance for Sterling against many currencies.

Relative to the U.S. Dollar and Euro, however, the outlook is not quite so bleak with the greenback expected to begin falling late in 2023 while Europe and the European single currency remain in similar positions to the UK and Pound.

Goldman Sachs forecasts the Pound-Dollar rate to fall back end to 1.07 in the months ahead but tips the pair to end 2023 at 1.22 while GBP/EUR is seen dipping below 1.14 in spring time 2023 before ending the year back above 1.16 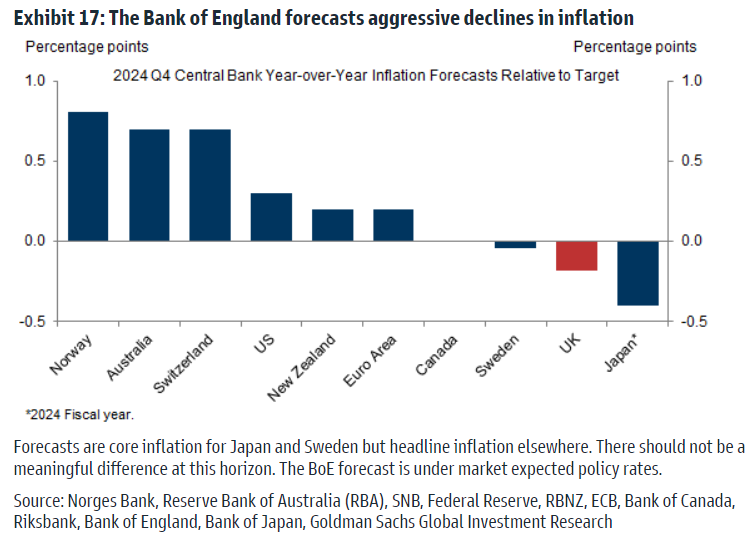