Volumes rose to eclipse turnover in the Japanese Yen during the opening session of the week after the Pound fell to a new historic low against the U.S. Dollar, leading to all-time lows in a range of other Sterling exchange rates.

Amounts traded came close to matching the turnover of Chinese Renminbi and were equivalent to more than three quarters of the volume changing hands in EUR/USD, the world's most actively traded exchange rate. 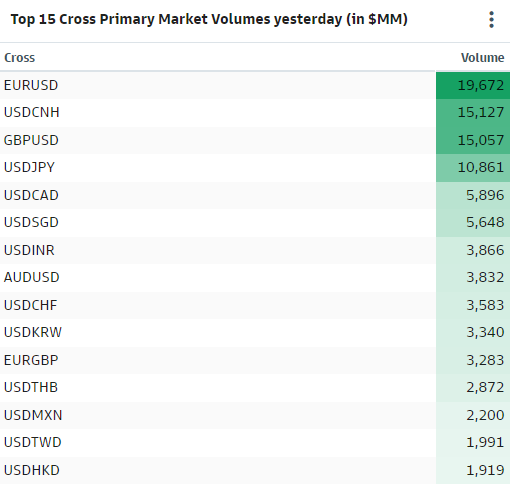 The above rank order of Monday's volumes covers FX spot transactions only and so does not include derivatives such as FX forwards and FX swaps, where trading volumes can be equally as significant, if not more significant at times.

These figures are based upon trades carried out through only two platforms, albeit two of the most significant, including the Electronic Broking System (EBS) platform recently acquired by CME Group from former owner TP ICAP.

The below image compares Monday's volumes to the three-month daily average and is taken as a proxy for what might be considered a recent norm.

The largest increases relative to the recent norm were evidently in the Sterling exchange rates GBP/USD and EUR/GBP, although Swiss Franc and Canadian Dollar transactions were also higher than what might be considered usual. 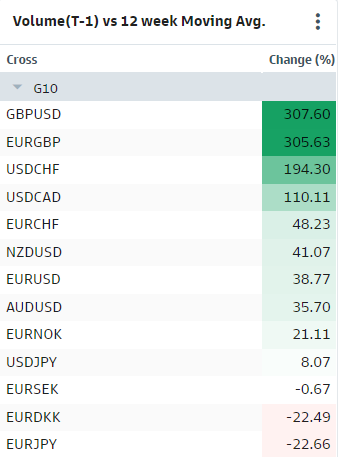 Sterling trading volumes as measured above appeared to normalise on Tuesday but were back at more than twice their trend levels on Wednesday.

Similarly, Swiss Franc and Canadian Dollar turnovers were also high, although there was a more significant development in midweek trade.

This was the surge in Chinese Renminbi trading volume, which eclipsed even that seen in EUR/USD; typically the most traded exchange rate.

The data included above and below is published daily but with a one-day lag. 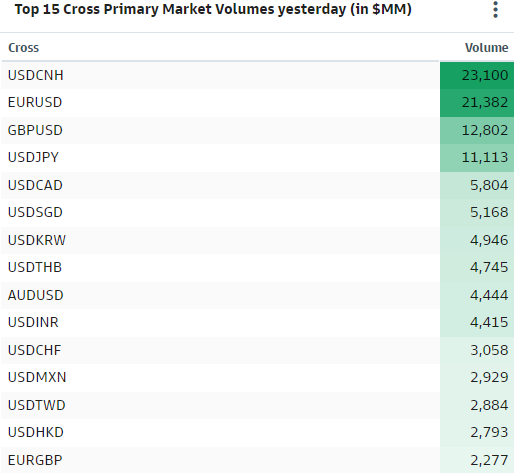 All of these fluctuations took place in what has been a significant period for macroeconomic and financial newsflow.

While the implications may still be underappreciated, the UK government's spending plans and the financial market response to them are both well known, although the latest developments in China's currency policy may be less widely known and are partially summarised below.

"While USD/Asia may be close to topping out for the cycle, we wouldn't be getting aggressively short yet. PBoC's latest defense of the RMB is a case in point. The central bank has reportedly told state banks to prepare to intervene in the FX market on its behalf," writes Stephen Gallo, European head of FX strategy at BMO Capital Markets, in a Thursday market commentary.

"The scale of their firepower is credible, as the aggregate net foreign asset position of local banks reported by the PBoC turned notably more positive in 2021. But the rate of increase had already started to turn lower in Q2. It is therefore quite possible that state banks have been intervening on PBoC's behalf by selling foreign currency for some time," he added. 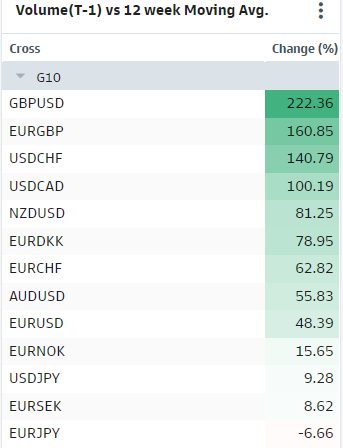