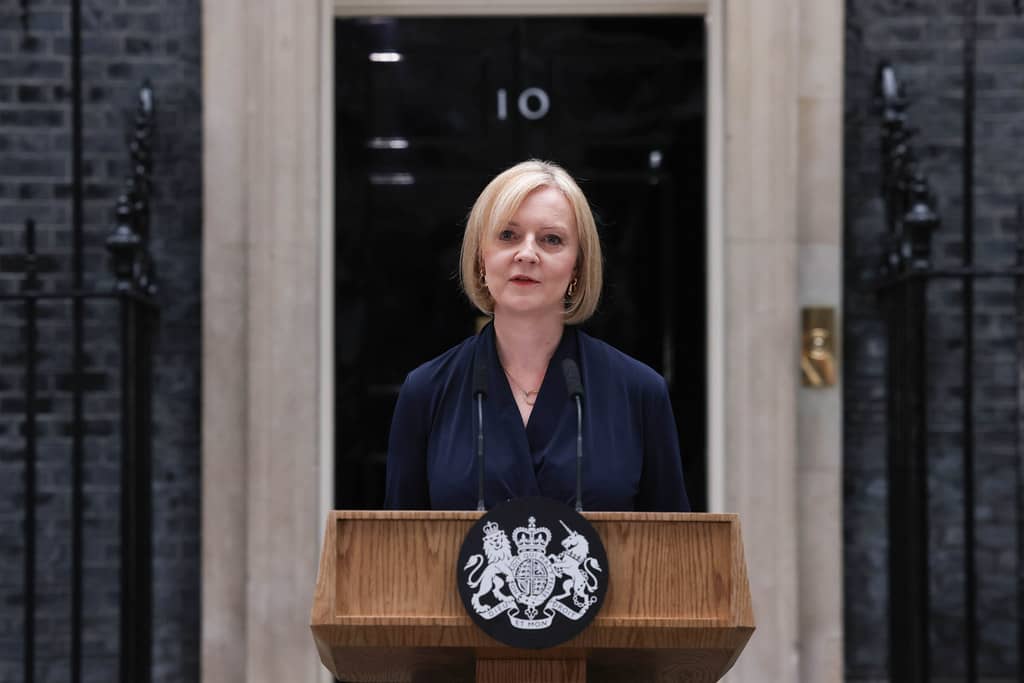 Above: Liz Truss arrives at No.10 Downing Street after an audience with Her Majesty Queen Elizabeth II in Balmoral, Scotland. Picture by Simon Dawson / No 10 Downing Street.

The British Pound was better supported on a day it was reported the new UK government would deliver a significant support package for households facing surging energy bills, but analysts remain wary of the currency's ability to appreciate from here.

The Pound was near the top of the currency leaderboard on September 06 on reports the new Prime Minister Liz Truss would effectively cap household energy bills near current levels, a move economists say could slash the peak in domestic inflation.

An official announcement is due in the House of Commons on Thursday.

Some economists say a cap that keeps bills at current levels would mean the peak in inflation is behind us; "inflation may already have peaked in July at 10.1% y/y," says Fabrice Montagné, an economist at Barclays.

This is significant given fears inflation is due to surge to 13-14% by most economists in the event the October energy bill hike goes through.

The UK's current economic crisis has inflation at its heart; kill inflation and the problem dies.

Furthermore, a package of £40BN is reportedly earmarked to support businesses.

Taken together these steps would significantly boost UK economic growth prospects, not least via the morale boost consumers and businesses would receive. After all, consumption and investment decisions are one of the main casualties of the anxiety posed by the looming rise in energy bills. 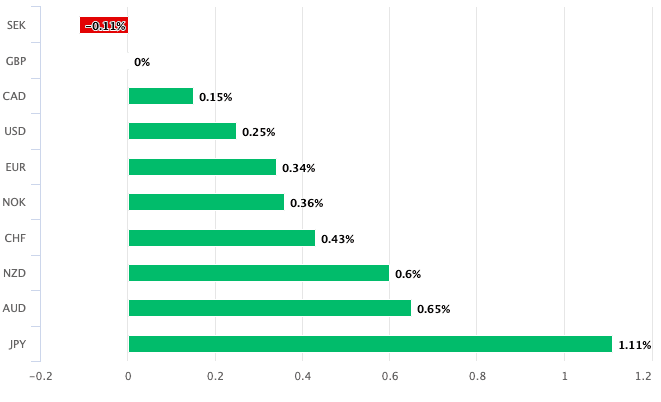 Above: Hints of outperformance by the GBP on Tuesday, Sept. 06. Don't miss your ideal rate by setting your free FX rate alert here.

Paul Robson, Head of G10 FX Strategy at NatWest Markets, says growth matters for the Pound, and when the UK growth outlook improves the Pound might find its base against the Dollar:

"It's clear that UK assets aren't seen as attractive at current exchange rates. It means risks for Sterling are heavily skewed in favour of further declines, potentially steep declines. While the cyclical low of 1.1412 may see a pause, there is really very little reason why the decline will stop at this level unless the growth outlook improves," he says in a weekly note.

The Pound was the second-best performing major currency in the wake of news of Truss' energy plan, which could cost in the region of £100BN-£130BN.

The Pound to Euro exchange rate rose by a third to 1.1640, which lifted euro payments on high-street bank accounts back above 1.14 and quotes at independent payment providers to 1.16.

The Pound to Dollar exchange rate recovered from Monday lows to 1.1534, taking dollar payment rates on bank accounts to around 1.13 and those quoted at independent payment providers to around 1.15.

These therefore remain difficult times for those buying foreign currency and Sterling's rally was not completely convincing, primarily because as of yet there are no concrete plans for investors to consider and because global factors continue be of significance.

Nevertheless, a trader at JP Morgan's institutional currency sales desk says the proposals will do enough to query the 'doom' narrative that has hung over the Pound's head for much of the summer.

"These plans will have the double edged sword of boosting growth and lowering inflation expectations and I think there is a window for relief from the stagflationary mindset before ultimate worries of debt sustainability creep in, time to be long some pounds," says the trader.

The costing of the plans remains the single most significant point of concern for investors.

The UK currently runs a sizeable budget deficit alongside a trade deficit, meaning it is vulnerable to deteriorating investor sentiment.

Specifically, the UK needs foreign investors to remain willing to buy up UK government debt, which will increase as the government seeks to fund its rescue package.

Losing investor confidence would only push up the cost of servicing UK debt and risks a downward spiral for UK bonds and the Pound, making the job of supporting UK households all the more difficult.

"PM Truss has a significant 'to do' list in her first months as PM. The devil will of course be in the detail but we the decline in GBP has become almost self-fulfilling - failing to benefit from BoE rate hikes and fiscal support measures," says Kamal Sharma, a foreign exchange analyst at Bank of America.

Like other currency analysts, Sharma notes the British Pound has of late failed to follow the rise in UK bond yields (which is the regular money paid by the government to investors of the bonds it issues).

Underperformance by the Pound in an environment of rising rates could suggest broader concerns the market has with long-term UK fundamentals. 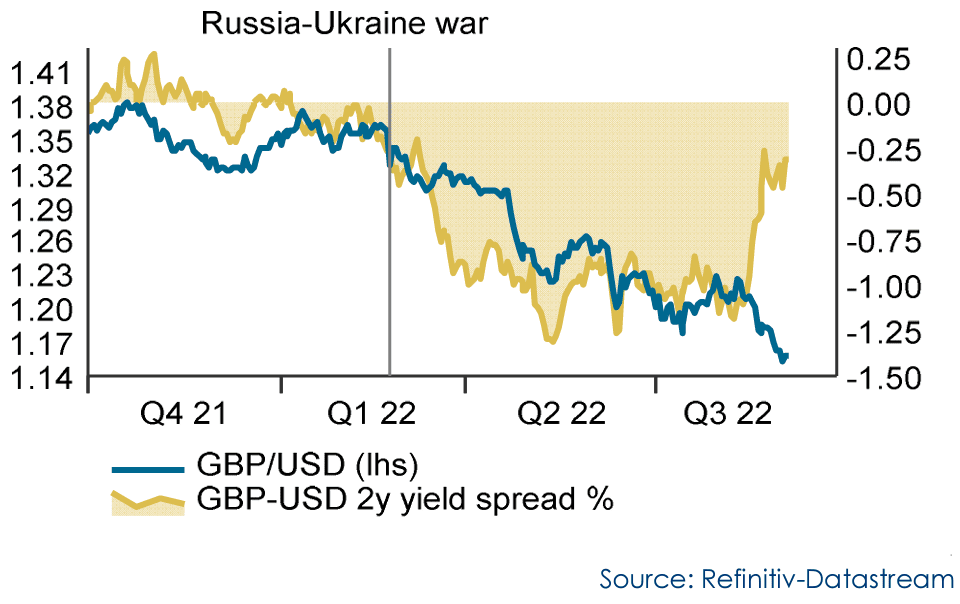 Above: The Pound is falling, despite UK debt yields rising. Image courtesy of Intesa Sanpaolo.

Bank of America say risks of a fall in the Pound to Euro exchange rate to 1.11 are possible in the event of an "existential crisis" for Sterling markets.

Under such a scenario the Pound to Dollar exchange rate could dip below 1.10.

"The decline in UK growth over the coming years is likely to be significant and this once again exposes the UK's Achilles Heel of poor domestic/external fundamentals. We doubt that the change in leadership materially impacts the market view that UK politics remains somewhat chaotic," says Sharma. 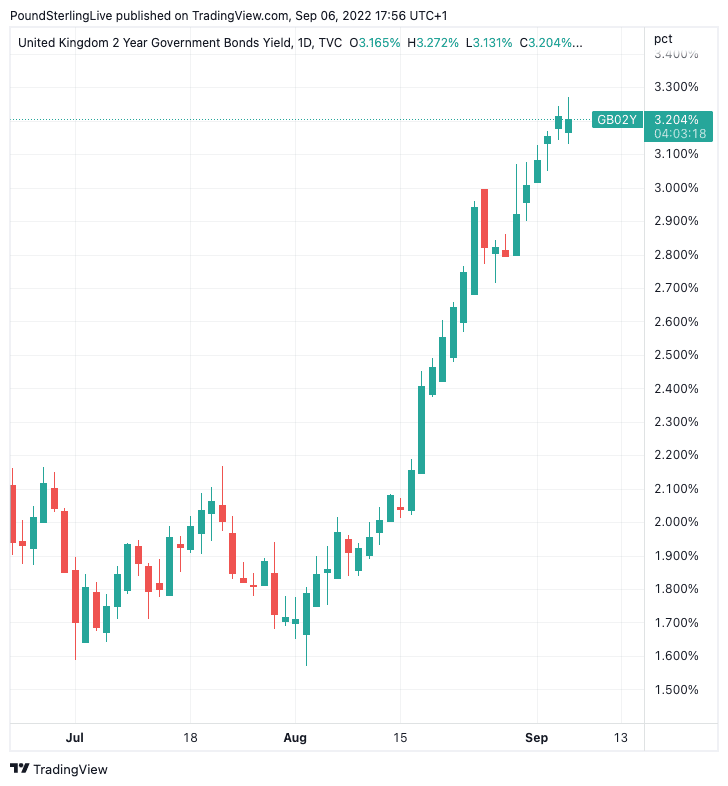 Above: The cost of funding government debt is shooting higher, as shown by the yield paid on UK 2-year government bonds.

But one economist we follow says the market will likely keep faith in the UK, allowing the government to fund its next borrowing spree, a view confirmed by a well subscribed bond sale carried out on Tuesday morning.

"We share concerns regarding the right balance of fiscal plans in the UK and expect some degree of fiscal risk premia to feature in the near term. However, we think fears of unfunded tax cuts and energy subsidies precipitating a fiscal collapse are not justified," says Geoffrey Yu, FX and Macro Strategist for EMEA at BNY Mellon.

Yu says incoming Prime Minister Truss faces one of the most challenging fiscal outlooks of any new prime minister in recent memory, but there is capacity to be utilised.

"That, combined with the intrinsic advantages of the Gilt market, should for now continue to give Gilts the benefit of doubt," he adds.

The UK meanwhile appears to be finding healthy demand amongst investors, which will be a relief for the government as they sound out their plans.

The Debt Management Office confirmed Tuesday the government raised £3.5BN in gilts for maturity in three years, at a yield of 3.2%.

The all important cover ratio, which signals the strength of appetite for the debt, was at 2.57 times (this means the amount of bids exceeded offers by a factor of 2.57:1).

The narrative around the Pound and Sterling assets has been relentless negative of late, but it does appear chasing the downside will have its limits.

Although the Pound has hogged the limelight on the day the UK sees a new Prime Minister installed, the Dollar continues to hog the crown.

The currency maintains an irresistible trend of appreciation in a world beset by war, rising interest rates and slowing economic growth.

The world's de facto currency and automatic safe haven pushed the Euro to fresh 20-year lows and the Yen to 24-year lows on Tuesday; the Pound will find the Greenback's trend of appreciation hard to resist.

Therefore the global macro environment could yet remain more important for Sterling than domestic events, at least until investor confidence returns.