The latest leg lower in the Pound comes amidst a significant fall in global stock markets, hinting that investors are increasingly downbeat which is having implications for foreign exchange markets.

"Currency traders are running for the hills," says Jeremy Boulton, a market analyst at Reuters. "The Dollar is soaring as cash heads towards safe assets... previously in demand currencies have weakened substantially."

The Pound is one such "previously in demand currency".

The UK currency is under intense pressure and is not just falling against the Euro, Dollar and other traditional 'safe haven' currencies such as the Franc and Yen; worryingly it is falling against most major currencies.

This graphic highlights just how poor the Pound's performance relative to its G10 peers currently is; as can be seen only Norway's Krone is doing worse: 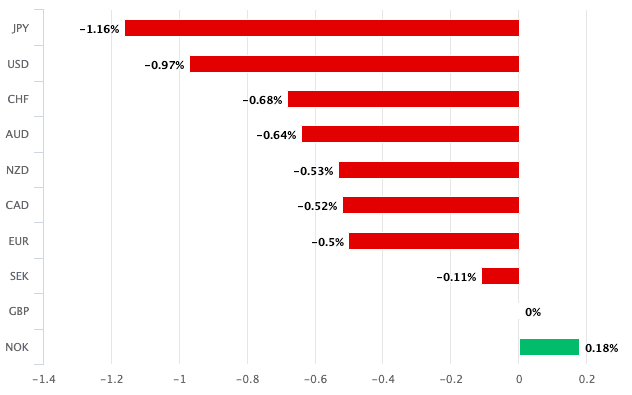 Why is the Pound Falling?

There are two notable reasons:

1) The Pound tends to struggle when when markets and sentiment fall as they are now. 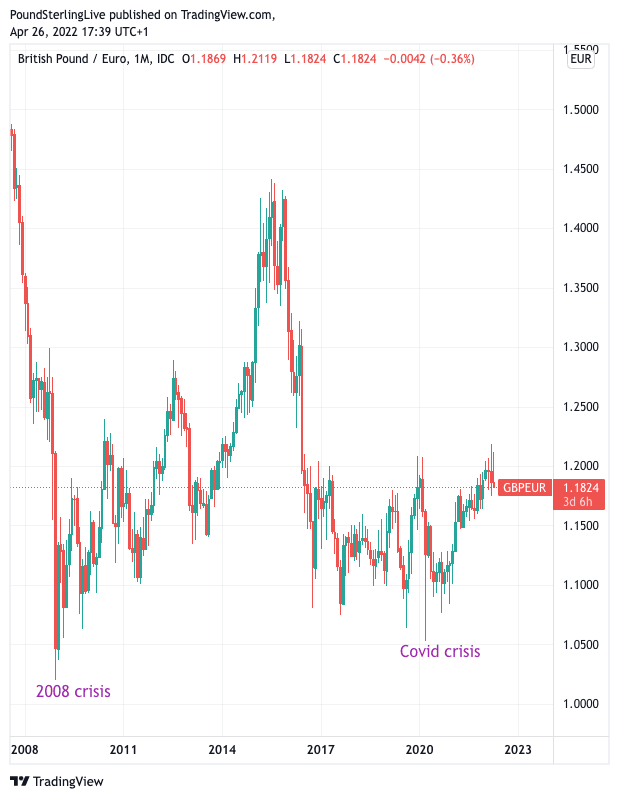 Above: GBP/EUR at monthly intervals, showing its all time low. Set your FX rate alert here.

Because the UK runs a persistently large current account deficit the Pound's value relies heavily on global investor flows: when times are good and investors are investing the Pound benefits as capital flows into the UK.

When investors are liquidating positions money flows out again, weighing on the Pound.

This dynamic certainly holds true in 2022 as they country's current account deficit remains as yawningly wide as ever. 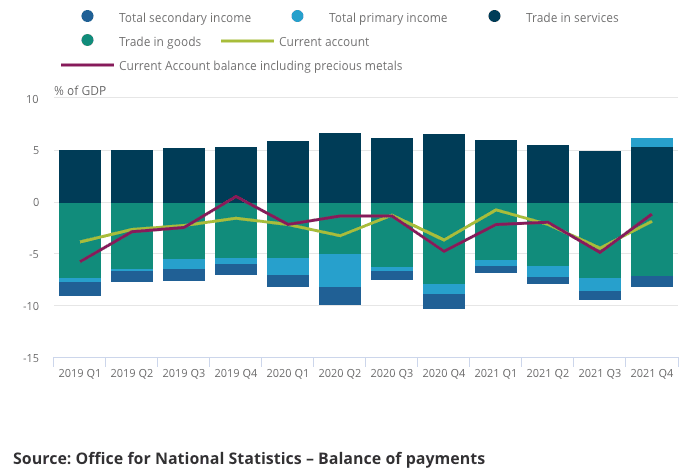 Above: The UK's current account deficit is persistent as the UK earns less through global trade than than it spends.

As long as global markets and investor sentiment remains under pressure, soo too will the Pound.

At present investors are concerned that China's economy is about to stall which will negatively impact on global growth rates, thereby hitting investor sentiment.

"While there are multiple catalysts for the continued downtrend, including a crackdown on technology companies, a real estate slump, and general risk aversion from the ongoing Russia-Ukraine conflict, the biggest issue for traders right now is the ongoing outbreak of COVID in the country," he adds.

As we note here, Beijing could be the next mega city to go into a lockdown, and this is not good for global investor sentiment.

Meanwhile the war in Ukraine continues, with news that Russia had cut gas supplies to Poland was also not well received by markets.

2) Investors are worried about the UK economy

Concerns over the outlook for the UK economy are growing and this could explain why the Pound is currently one of the worst performing of the world's major currencies.

"Sterling hovered around its lowest level in more than 1½ years against the greenback as steady signs of a slowing British economy suggested less latitude for the Bank of England raise interest rates to fight the highest inflation in decades," says Manimbo.

Economists at Deutsche Bank yesterday warned recession risks in the UK are rising as the cost of living rises and squeezes households.

Furthermore tax rises from April will eat further into household budgets and consumer confidence has already tanked to recessionary levels according to Raja.

Real wages are meanwhile forecast to shrink by 4% in 2022 in what amounts to one of the worst real term cuts to pay packets since the Second World War.

And business confidence is softening in the midst of rising cost pressures and falling operating margins.

Deutsche Bank's suite of "recession models" all point to one thing says Raja: "the probability of a recession is rising."

The Dollar Could be in for Even Bigger Gains

The Dollar remains in demand and its ascent has only accelerated amidst a broad deterioration in global investor sentiment, driving the Pound to Dollar exchange rate lower to 21-month lows.

Martin Miller is a Reuters market analyst says the dollar could be on the verge of much bigger gains.

He notes the USD index - a broader measure of Dollar performance based on a number of key Dollar exchange rates - continues to trade "well above the 99.737 Fibo = very bullish".

He says there is scope for increased technical demand. 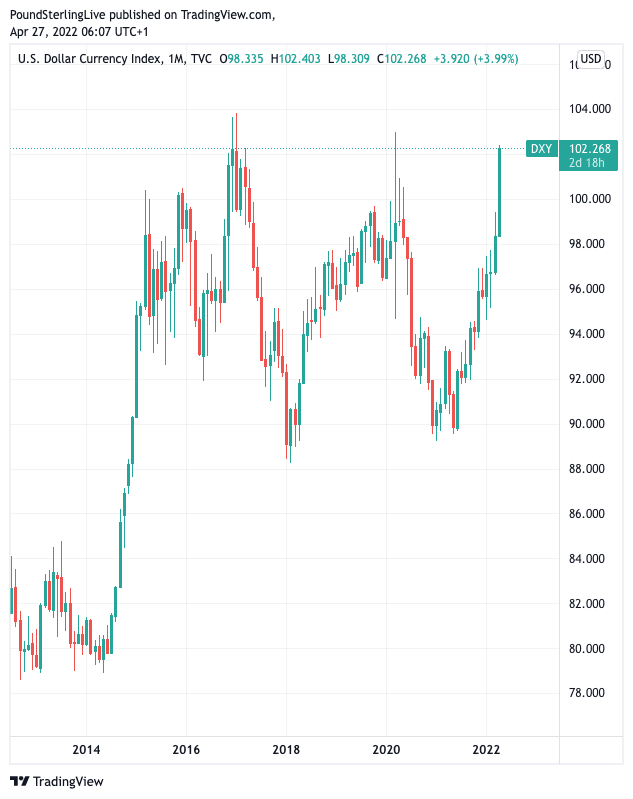 Above: The DXY dollar index at monthly intervals.

The Dollar is a the major engine behind GBP/USD losses and right now this exchange rate is a trend that should not be countered.

Stephen Gallo, European Head of FX Strategy at BMO Capital, says the Dollar is currently a winner in all weather.

"According to the so-called 'smile theory' of USD movement, the USD tends to rally in moments of distress in financial markets. These risk-off movements tend to be spike-like in nature," says Gallo.

He explains the 'smile theory' also observes that the USD also rallies in boom periods when growth is out of hand because the USD generally rallies as the Fed raises rates, with the Fed generally tightening policy more aggressively than other major central banks.

The Fed could be on course to raise rates by over 200 basis points in 2022 alone, significantly higher than the Bank of England will be able to.

But, for now it is the ongoing deterioration in market sentiment that appears to be stimulating demand for the Dollar.

"What seems to have happened over the course of less than a week is that we have transitioned from a Fed-on USD rally to a risk-off USD rally with no down time in between. We would assign most of the change in market tone to the latest developments in China," says Gallo.