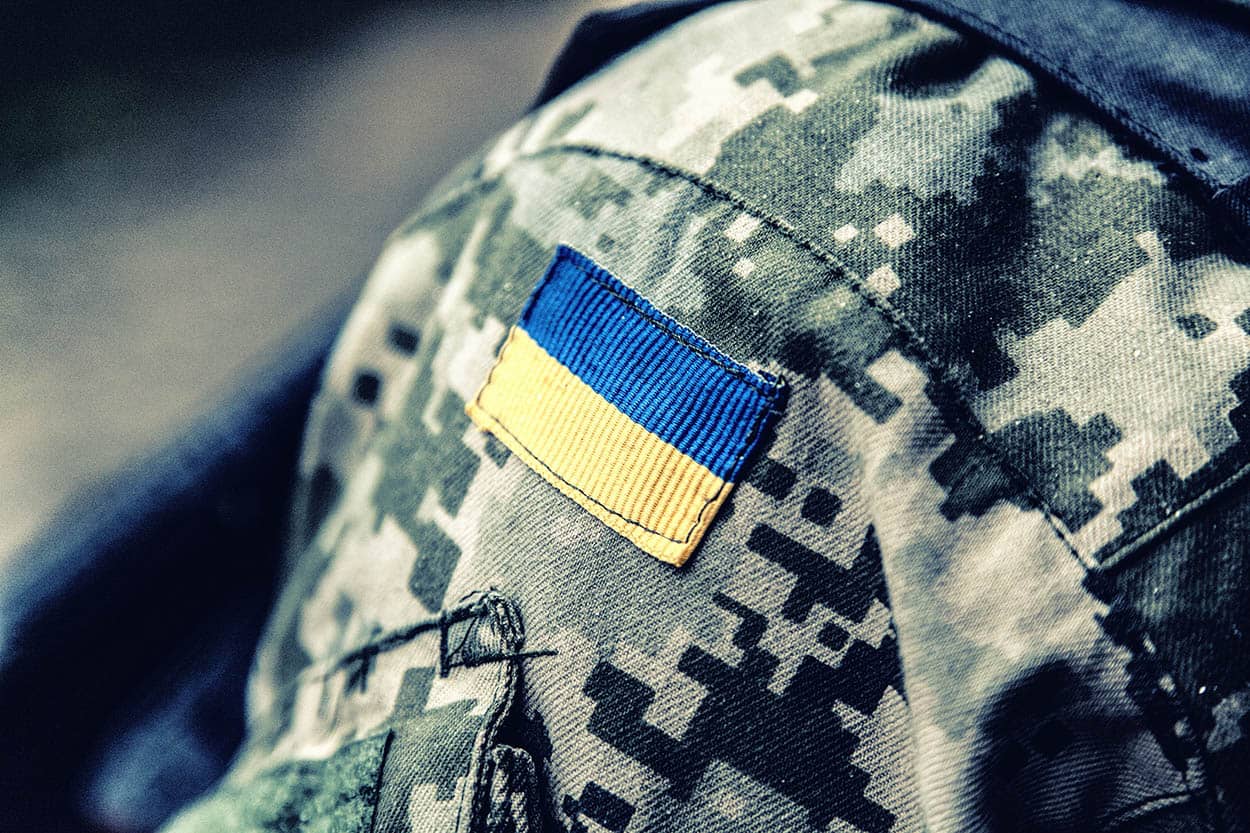 The British Pound is the second-worst performing major currency of the past week and month as it proves to be a major loser in the financial fallout caused by Russia's invasion of Ukraine which has forced investors to significantly reconsider how fast the Bank of England will raise interest rates in 2022.

In fact, our data shows only the Swedish Krona has lost more value.

The Euro is however also a laggard which explains why the Pound to Euro exchange rate has managed to keep in touch with the psychologically significant 1.20 level.

The outbreak of war and resultant sanctions placed on Russia has lead investors to rapidly reduce the number of interest rate hikes they expect the Bank of England to deliver over the duration of 2022 and 2023 as economic growth fears mount.

Because the Bank of England was amongst the most richly priced central bank heading into the conflict it stands that it has the most to lose as these expectations are inveitably reversed.

"The Bank of England tightening cycle has suffered one of the largest repricings lower. For example, the terminal rate for BoE rates has been downscaled by 70bp over recent weeks, while the Fed cycle is -50bp and the ECB cycle -35bp," says Chris Turner, Global Head of Markets at ING Bank. "This should leave GBP a little vulnerable". 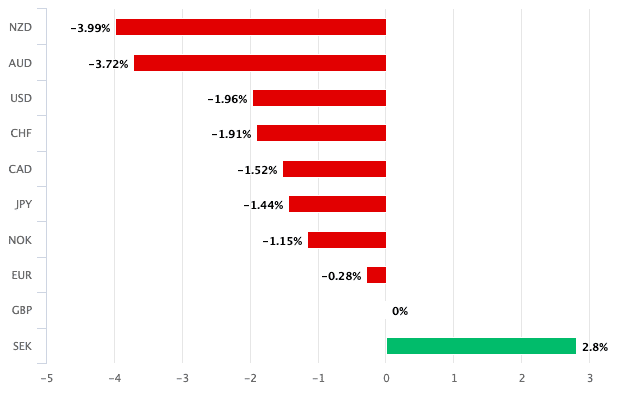 Above: GBP performance over the past one-month time period.

As of February 22 there were 134 basis points of Bank of England hikes priced for 2022 in OIS markets, a money market that serves as a gauge of investor expectations for future rate hikes.

But as of the end of February those expectations had fallen to 126 basis points and as of the first of March they had fallen yet further to 111.

"Another ramification of the ongoing conflict was that investors continued to price out the more aggressive reaction functions from central banks they’d been expecting before the invasion," says Jim Reid, an analyst with Deutsche Bank.

Pound Sterling put in a strong start to 2022 as investors bet the Bank of England would potentially raise rates faster and more than its peers, particularly the European Central Bank.

Therefore, a reversal of these expectations would work in the opposite direction and weigh on the currency.

In a weekly currency briefing analyst Marek Raczko at Barclays says while rates markets pared expectations for most G10 central bank tightening in the wake of Russia's invasion of Ukraine, Bank of England tightening expectations were pulled back the most. 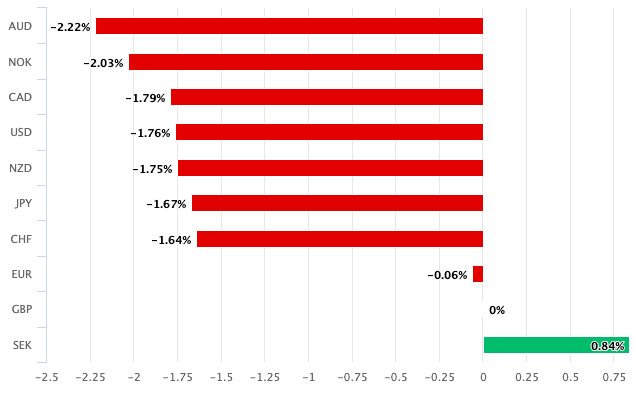 Above: GBP performance over the past one-week time period.

The Pound tends to outperform when rate hike expectations are rising more broadly: this is a currency that has traditionally been at its strongest in high interest rate environments.

But the amount of Federal Reserve hikes priced for 2022 fell by a sizeable 21 points at the turn of the month to 138bps.

Despite the rapid reappraisal of Fed hikes the Dollar tends to benefit during times of heightened geopolitical fear as its significant liquidity makes it a safe haven asset.

For those watching foreign currency markets the question is how far this broader rate adjustment continues.

With little sign of an end to the war in Ukraine and its associated financial fallout investors will continue to lower their expectations of the Bank of England, ensuring the Pound remains under pressure.

Of course, should investors anxieties over Russia-Ukraine start to ease for whatever reason then these hike expectations could begin to build again which might ultimately result in a recovery for the British currency.

For the Pound, the mid-month Bank of England interest rate decision and associated guidance will prove to be the near-term domestic highlight with markets anticipating another 25 basis point hike, but investors are wary the Bank will strike a cautious tone about the economic outlook.

But he stressed interest rates needn’t rise very far to bring inflation back to target, noting that energy prices may fall-back.

"I think I said in the press conference when we issued the report, and I would just repeat those words. You know, it is a message to markets not to get carried away," said Bailey.

The Bank will be cautious in how it proceeds on rate hikes amidst falling economic growth expectations for the UK owing to surging inflationary pressures.

Initial assessments show that the UK has a relatively small direct exposure to Russia, although the fallout from surging oil and gas prices are seen as the most significant source of economic headwinds.

"The outlook for the U.K. economy has darkened following the Russian invasion of Ukraine. We have hiked our forecast for the peak rate of CPI inflation in April to 8.0%, from 7.7%," says Samuel Tombs, Chief UK Economist at Pantheon Macroeconomics.

Oil and gas prices have risen sharply in the wake of Russia's invasion of Ukraine and the significant economic sanctions placed on Russia by Western nations and allies.

Sanctions include was the ejection of the majority of Russian banks from the SWIFT financial commutations system and the isolation of the Central Bank of Russia.

This could make it harder for clients of Russia to pay for gas, oil and other commodity deliveries, potentially squeezing supply further and pushing up prices.

UK Business and Energy Secretary Kwasi Kwarteng on Monday said "unlike Europe, we're not reliant on Russian gas. But like others, we are vulnerable to high prices set by markets".

Higher oil prices will continue to be felt on UK forecourts and raise the costs of doing business while delivering another external inflationary shock.

The RAC on Monday reports that on Sunday the average price of litre of petrol reached £1.51 in the UK, a record and the first time it has gone above £1.50. Super-unleaded reached £1.63 and diesel went to £1.54.

"This threatens to keep CPI inflation further above the 2% target this year," says Paul Dales, Chief UK Economist at Capital Economics, referring to the Bank of England's mandated 2.0% inflation target.

UK CPI inflation was already at 30 year highs at 5.5% in January and is heading to 8.0% by April, according to Capital Economics.

Pantheon Macroeconomics have meanwhile revised up their forecast for CPI inflation in the fourth quarter of 2022 to 6.7%, from 5.5%.