The British Pound's near-term outlook remains constructive thanks to hopes UK Covid cases have peaked amidst an ongoing unwind of bets placed against the currency during the latter part of 2021.

The UK reported 142K new cases of Covid-19 on Monday February 10, against 157K positives for the same day a week prior.

"There are signs of a peak in Omicron cases in London, this appears suggestive of a similar infection profile to that of South Africa, cases peaking around three weeks after the initial outbreak," says Jeremy Stretch, Head of G10 FX Strategy at CIBC Capital Markets.

But it is not just London where cases are falling as all countries of the UK and regions of England have now either seen case rises flatten or start to fall. Indeed, for the UK cases have now fallen week-on-week for five days in succession.

CIBC Capital Markets are expecting further EUR/GBP downside as a result of ongoing developments and are looking for 0.8295 to be achieved eventually, (GBP/EUR goes up to 1.2055). 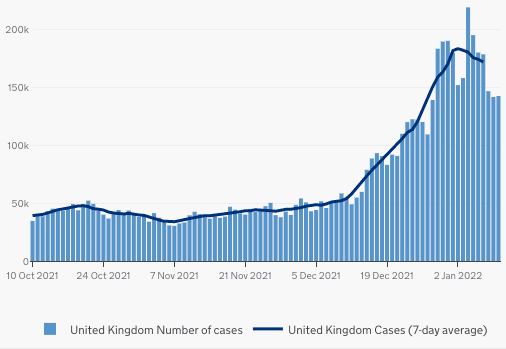 Above: Number of new UK cases (people who have had at least one positive COVID-19 test result) by date reported.

The UK government is meanwhile reportedly considering plans to cut the Covid-19 self-isolation period from seven days to five, a development that could ease the hit to the economy caused by the surging numbers of workers self-isolating following positive Covid tests.

Speaking to reporters at the start of the week Prime Minister Boris Johnson said ministers are considering reducing the self-isolation period for fully vaccinated people who test positive for the virus.

While the government has put in place some measures to contain the spread of Omicron, economists say the biggest negative economic impact dealt by the latest wave are surging self-isolation numbers and subdued consumer sentiment.

A combination of the two factors would be the main contributors to an expected decline in economic activity in December and January.

But falling case numbers and a shortening of self-isolation times would open the doors to a February rebound in economic activity, which will bolster expectations for another interest rate rise at the Bank of England and is therefore on balance supportive of the Pound.

Sterling rose back to the key 1.20 hurdle against the Euro and maintained 2022's advance against the Dollar as markets reacted to a global bond sell-off that meant yields on UK and U.S. bonds advanced to their highest levels in months.

The rising bond yields are symptomatic of an investor reckoning that the U.S. Federal Reserve and Bank of England will be required to adopt a more 'hawkish' policy stance in 2022 in the face of surging inflation levels. 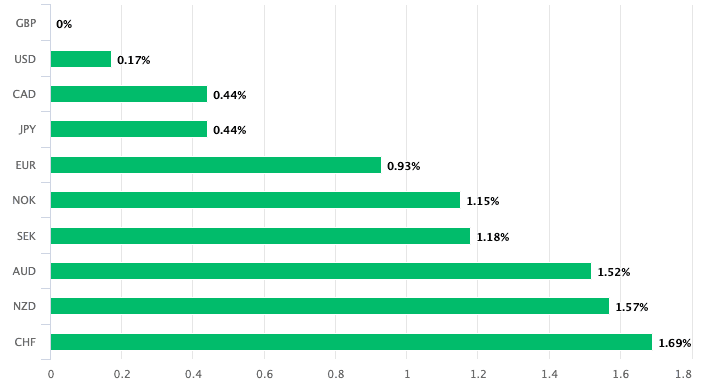 Above: The Pound is the top performing currency of 2022.

Much of Sterling's December-January rally against the Euro, Dollar and other currencies is due to growing expectations amongst investors for the Bank of England to raise rates sooner and higher than other countries.

Hopes for a sharp economic rebound in the wake of the Omicron wave will only bolster expectations for the Bank of England to hike interest rates for a second time in three months at its February meeting.

"Money markets are pricing a more than 70% chance of another UK rate rise next month and for rates to top 1% by year end - higher than US rates. This has supported demand for the British pound," says George Vessey, an analyst at Western Union Business Solutions.

"Monetary policy divergence is currently working in sterling’s favour and with COVID-19 cases expected to rollover soon, the UK may have avoided another strict lockdown, which bodes well for its economic recovery – further supporting GBP," he adds.

The rally in U.S. and UK bond yields has so far proven to be a supportive dynamic for Sterling, therefore the longer this theme can run the longer Sterling will find buyers.

"The tightening of yield spreads against US was the main driver of the pound’s recovery, reflecting expectations for a second BoE bank rate hike already at the next meeting on 3 February. Improving sentiment on the evolution of the pandemic also contributed positively," Asmara Jamaleh, an economist at Intesa Sanpaolo.

The Pound to Euro exchange rate tested the 1.20 level again on Monday before a stock market sell-off occurred during the U.S. session which saw the UK currency pare some of the gains.

The moves are a reminder that broader market sentiment also matters for the Pound and that there are a number of factors driving the value of the Pound at any given time.

Global markets have taken fright at the rise in bond yields, believing that they are a signifier of tighter monetary conditions which will in turn drag on consumers and businesses, thereby slowing economic growth in the future.

But, as we discussed earlier, these rising bond yields are also proving supportive of the Pound, therefore the negative impact of the broader market sell-off is contained by the direct positive impact rising yields are currently having on the Pound.

The Pound remains the best performing G10 currency of the year so far, putting in a 0.20% against 2021's best performer the U.S. Dollar and a 1.0% gain on the Eurozone's single currency.

"Sterling also expressed a directional dynamic over the past three weeks, rising back mostly against the dollar, from GBP/USD 1.31 to 1.36, but also against the euro, from EUR/GBP 0.85 to 0.83, updating here its highs at the beginning of the year," says Jamaleh.

The flying start also owes itself to a market that was caught poor positioned on the currency, as CFTC data revealed the market maintained a net 'short' against the currency as investors bet further falls were in store.

When the market is heavily 'short' against a currency a counter-trend shock can force these positions to unwind, creating a technical momentum that delivers further gains. 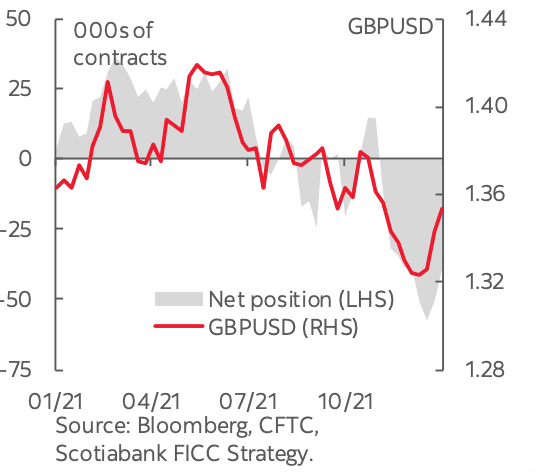 "Real money investors aggressively pared GBP shorts into the start of 2022, the weekly position correction proving the most aggressive since the end of October," says Stretch.

Investors will likely continue to exit the net short position built up against the Pound over coming days and take the market to a more balanced state.

However, it would only be when a net 'long' position builds up - as was seen in the first part of 2021 - would positioning begin to be a headwind for the UK currency.