The British Pound is 2021's star performer, aided by a combination of constructive investor sentiment and expectations for a series of interest rate rises at the Bank of England.

But the release of the Federal Reserve's minutes for the December policy meeting mid-week did deal a setback to stock markets and the Pound alike; confirmation of just how important global investor sentiment is for the UK currency.

Weakness in Sterling did however prove limited and was certainly less severe than that suffered by global stock markets.

The Pound's shallow pullback can be explained via the source of the market's latest concerns: the Federal Reserve on Wednesday night released minutes to its December meeting in which it signalled it needs to go harder and faster on reducing monetary support for an economy facing surging inflation levels.

This is because the Bank of England tends to respect the much larger Fed's monetary policy cycle, meaning expectations for up to four Fed rate hikes in 2022 - the first likely in March - will give the Bank additional confidence to raise its own base lending rate.

This in turn offers a supportive narrative for the Pound.

Furthermore, he notes that the most recently available data shows the market is positioned against the Pound which could support upside going forward: 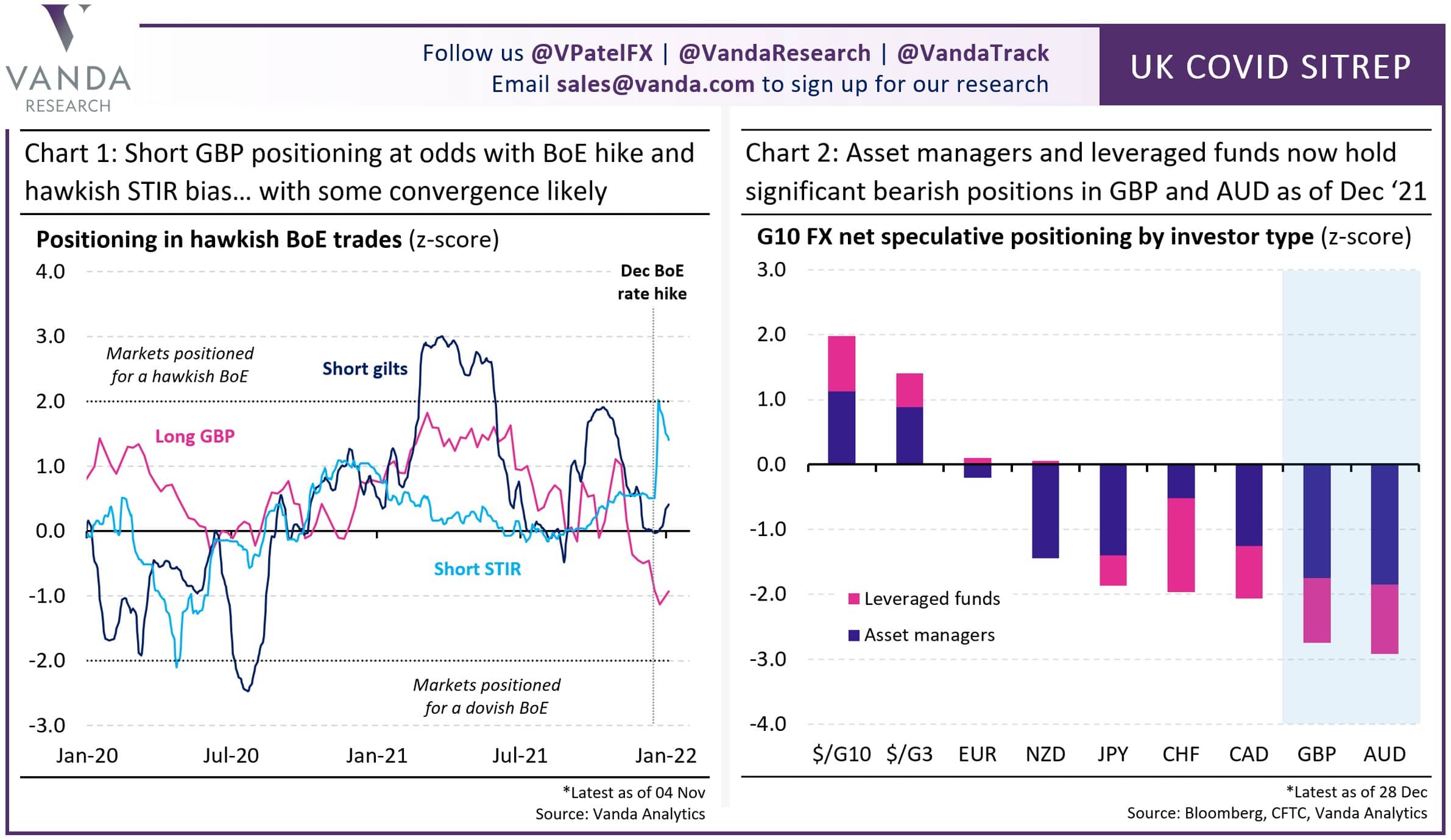 The Bank of England surprised markets by not hiking interest rates on November 04 having sent signals over preceding weeks that it would.

Then on December 16 the Bank surprised markets again, this time by raising rates.

At this point the Bank's Monetary Policy Committee had the benefit of the Fed's hawkish November policy update to consider before pulling the trigger and raising rates in December.

The Fed's November policy meeting signalled to markets in unambiguous fashion that interest rate rises were likely as soon as mid-2022 as it was clear FOMC members were becoming increasingly worried about the country's surging inflation levels.

The development gave UK policy makers the necessary confidence that UK rates would not become too rich as a result of a hike when contrasted to those of the U.S.

What the Fed does matters for the Bank of England to a great degree, therefore the additional hawkish turn in the Fed's December minutes will firm expectations for another hike in the UK this February. 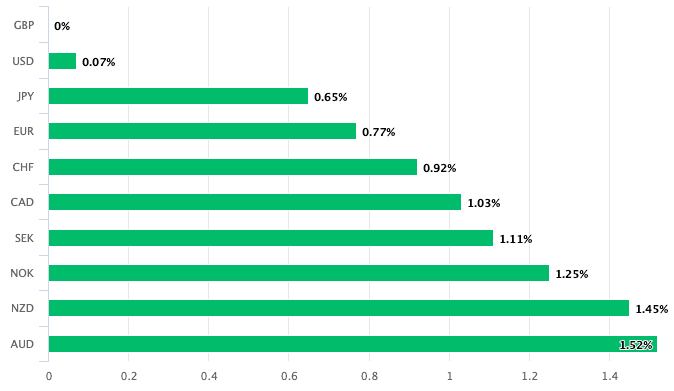 Above: The GBP has advanced against all its rivals thus far in 2022.

The Fed's minutes revealed it could raise interest rates as soon as March, opening the door to a potential four rate hikes in 2022.

The minutes proved more 'hawkish' than market participants had been expecting and lead investors to cut the new year's rally in equities and 'high beta' currencies.

"It may become warranted to increase the federal funds rate sooner or at a faster pace," said the minutes, citing a tightening labour market and elevated inflation levels.

The Dollar advanced as international investors priced in higher returns on U.S. government bonds over coming weeks and years.

The market now ascribes a 75% chance to a March rate hike.

"This also opens the window for not just three rate hikes this year (which is our base case and what Fed signalled in the December dots) but four if the Fed hikes once per quarter as was the case when the hiking cycle started for real after the financial crisis," says Bjørn Tangaa Sillemann, Senior Analyst at Danske Bank.

The Fed also gave guidance on slimming its balance sheet, which has grown following substantial rounds of quantitative easing.

Committee members said they would like to start "quantitative tightening" earlier and run off holdings faster than in previous cycles.

This signalled to investors that an era of 'easy' money and ample dollar liquidity - the engine of the spectacular market gains seen in 2020-2021 - is coming to an end in 2022, which is ultimately supportive of the Dollar.

For its part the Bank of England is currently anticipated by markets to raise Bank Rate to 1.0% by the time the year is done: the ability or failure to meet this expectation will determine how Sterling trades over coming months.

Economists at HSBC say they now see the Bank Rate at 1.0% by year-end.

"It seems that the furlough scheme has ended smoothly, with workers either returning to their old jobs or finding new ones," says HSBC in a note issued at the start of the year.

They have also raised their inflation forecasts and now see CPI inflation peaking at 6% in April and staying above 3% throughout 2022.

"Given these new labour market and inflation forecasts, and following the BoE’s rate rise in December, we now expect three more hikes of 25bps each: in February, May and August 2022, taking Bank Rate to 1.00%," says HSBC.

But there are no shortage of economists and foreign exchange strategists who warn the Bank will be unable to live up to expectations to deliver a 1.0% Bank Rate by year-end.

For many there is a concern that the country's economic growth potential will be hampered by the rising cost of living as taxes rise and energy bills surge.

"We continue to doubt, however, that the MPC will hike Bank Rate in every quarter of 2022, as markets expect," says Samuel Tombs, Chief UK Economist at Pantheon Macroeconomics.

"We expect two rate hikes from the BoE this year and doubt that the MPC will be able to meet the market expectations of almost four rate hikes," says Valentin Marinov, Head of FX Strategy at Crédit Agricole. With many positives in the price of the GBP by now, the currency could struggle to extend its recent gains in the absence of any support from the UK rates market."