The Federal Reserve spooked markets and boosted the Dollar after revealing it could raise interest rates as soon as March, opening the door to a potential four rate hikes in 2022.

The Fed's minutes for the December meeting, released at 19:00 GMT on January 05, proved more 'hawkish' than market participants had been expecting and lead investors to cut the new year's rally in equities and 'high beta' currencies.

"It may become warranted to increase the federal funds rate sooner or at a faster pace," said the minutes, citing a tightening labour market and elevated inflation levels.

The Dollar advanced as international investors priced in higher returns on U.S. government bonds over coming weeks and years.

The market now ascribes a 75% chance to a March rate hike.

"This also opens the window for not just three rate hikes this year (which is our base case and what Fed signalled in the December dots) but four if the Fed hikes once per quarter as was the case when the hiking cycle started for real after the financial crisis," says Bjørn Tangaa Sillemann, Senior Analyst at Danske Bank. 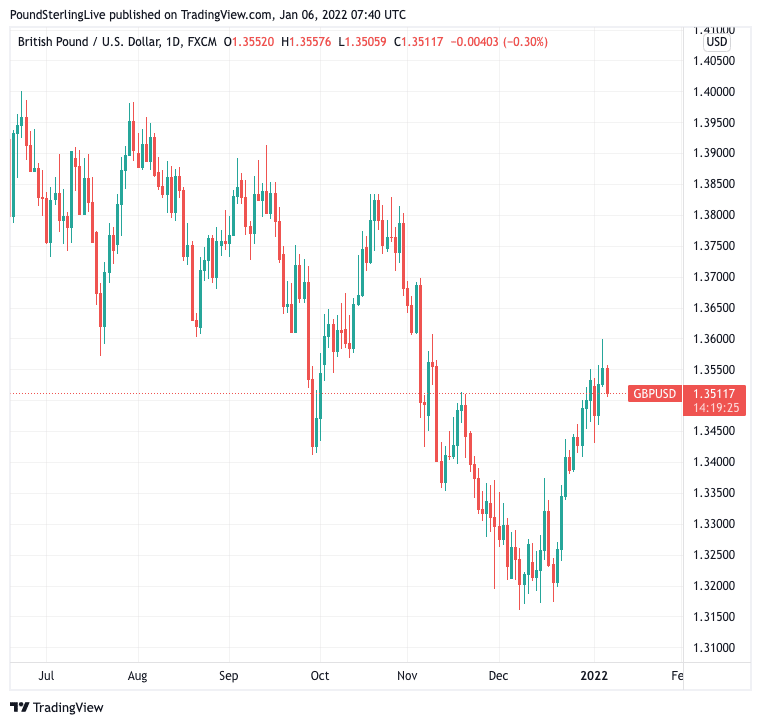 Above: Daily GBP/USD chart. Has the Fed put an end to the Dec-Jan rebound?

The Fed also gave guidance on slimming its balance sheet, which has grown following substantial rounds of quantitative easing.

Committee members said they would like to start "quantitative tightening" earlier and run off holdings faster than in previous cycles.

This signalled to investors that an era of 'easy' money and ample dollar liquidity - the engine of the spectacular market gains seen in 2020-2021 - is coming to an end in 2022, which is ultimately supportive of the Dollar.

The Pound to Dollar exchange rate rose to a high of 1.3598 on Wednesday before retreating on the headlines to trade at 1.3514 on Thursday.

"The sharp drop coupled with overbought conditions indicate that GBP is likely to consolidate for today, expected to be within a range of 1.3525/1.3595," says analyst Quek Ser Leang at UOB Bank. 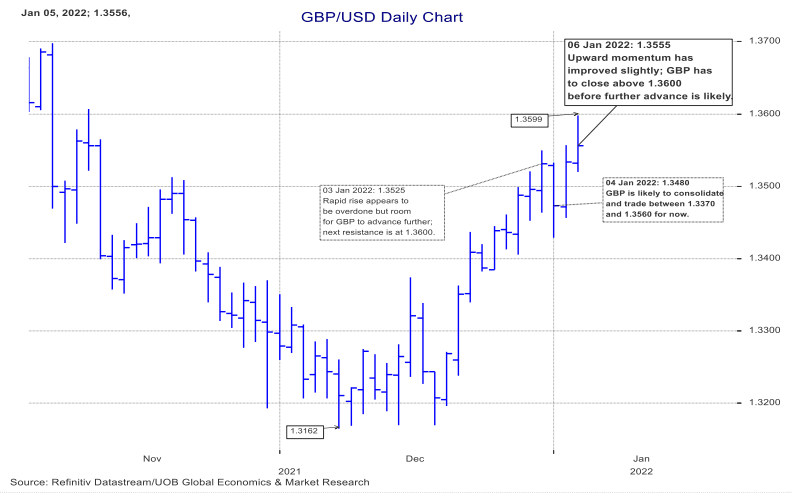 The Dollar is likely to remain supported against the likes of the Euro, Pound and 'high beta' currencies as long as markets remain under pressure.

"US equities sold off, and the S&P 500 Index lost all its new year gains and more as the pressure from higher yields intensified," said Alvin T. Tan, Asia FX Strategist at RBC Capital Markets. "The US dollar has gained ground."

"The combination of equity risk-off while yields continue to rise would be an interesting one if it endures, and should be broadly supportive of the US dollar," he adds.

Foreign exchange analysts at Citi described the Fed's minutes as some of the "most hawkish minutes ever delivered", saying they dealt a "rude awakening" to stock markets.

The 'high beta' Australian Dollar, New Zealand Dollar, Canadian Dollar, Krone and Krona would be vulnerable to losses in such an environment, as would Emerging Market currencies.

The Pound would potentially lose ground to the first group of 'safe haven' currencies while gain against the more vulnerable basket of currencies.

It would also potentially lose ground to the Euro, particularly in times of heightened market stresses, as the Eurozone's single currency is more closely aligned to the 'safe haven' grouping than it is to the 'high beta' grouping.