One of the most recognised names on the UK high street says 2022 will see the Pound deliver an uninspired performance against the Euro and head lower against the Dollar.

In a research note setting out their 2022 currency forecasts, HSBC says Pound Sterling is likely to suffer further disappointments at the hands of the Bank of England in 2022.

The note is released after the decision by the Bank of England to maintain interest rates at 0.10% in November, a decision that surprised investors who had been expecting the first of a series of rate hikes.

The Pound fell sharply in response, although it has since recovered much of that decline against most of its major peers.

This surprise was in part driven by commentary from the Bank of England Governor Andrew Bailey and his MPC colleagues in the run up to the event, where they warned UK inflation was starting to run hot and higher rates would come.

Markets are now pivoting to a December rate hike following strong labour market data and above-consensus inflation numbers out of the UK in this past week, which is in turn supporting Sterling.

If the Bank swerves a December hike then a February hike is almost certain, according to money markets which price hikes up to 1.0% by the end of the year.

But HSBC warns the Bank will disappoint against these expectations, and the Pound will suffer losses as a result. 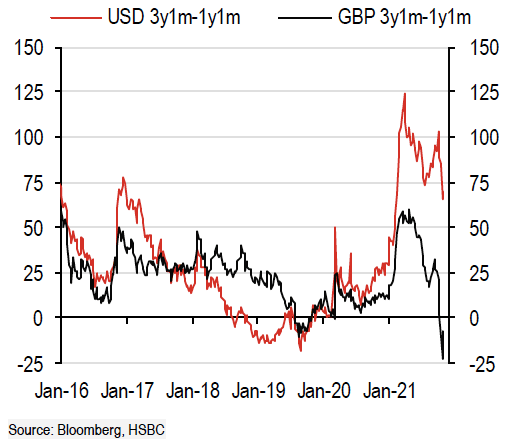 "Further rates disappointment may be coming, based on the inversion of the yield curve," says Mackel.

Mackel says there is a chance the Bank could start cutting interest rates again in 2023 when faced with a poor economic growth.

The country's trade deficit with the rest of the world is meanwhile expected to widen in 2022 as international travel picks up (the UK spends more in touring the world than it earns from visiting tourists) and import growth resumes.

"While current account deficits are rarely the most dynamic drivers for G10 FX, GBP’s will face a big challenge in funding a widening external shortfall when yields do not offer much of a buffer," says Mackel. 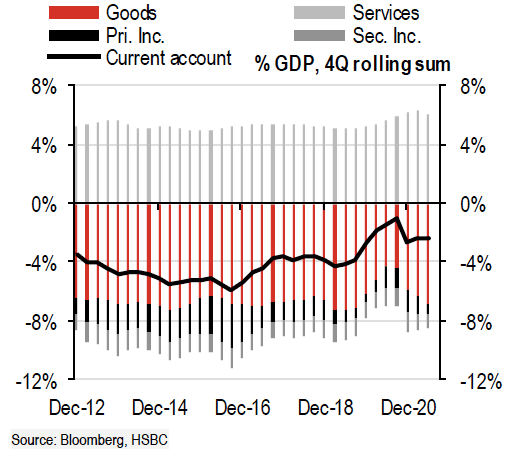 HSBC's 2020 forecasts for the year ahead missed the spike in the value of the Pound against the Dollar in the earlier part of the year, but an end-2021 forecast of 1.34 looks to have been a pretty accurate call.

HSBC's 2021 forecasts for the Pound against the Euro issued at the end of 2020 however proved to be wide off the mark, as they showed expectations for sustained weakness.

EUR/GBP is now forecast at 0.86 by year-end 2021, a point forecast that persists through to the end of the second quarter and a point forecast of 0.85 is seen for the third and fourth quarters of 2022.

This gives a Pound to Euro exchange rate forecast of ~1.16 and ~1.18 for these respective points.

HSBC's dour expectations for the Pound in 2021 convey an ongoing pessimism by the bank, which has nevertheless been shared by other sell-side analysts since the Brexit referendum.

"We should all try to not be bound by 'sell-side' narratives, these all too often prejudiced, inconsistent and prone to sudden corrections in recommendations - under the euphemism of 'revisions'" says Savvas Savouri, Chief Economist at Toscafund Asset Management.

Savouri is a buy-side analyst as he conducts research for his hedge fund and he finds the market and analyst community to be captured by negative confirmation biases with regards to the Pound.

Savouri says he believes the Pound is on course to record significant gains over coming months and years, citing a supportive economic backdrop, the prospect of higher interest rates at the Bank of England and increased demand for the currency from China.

"Sterling is poised to do what it did from late 1996. Specifically, after four years of weakness following its shock ERM exit in September 1992, the pound gapped-up impressively," says Savouri.

In 2021 those sell-side analysts who avoided the 'group think' bias regarding Sterling have done well, for example NatWest Markets' G10 FX strategist Paul Robson made buying Sterling against the Euro a key trade for the year.

In October Shahab Jalinoos, Global Head of FX Strategy at Credit Suisse, explicitly described an apparent confirmation bias towards the Pound displayed by his industry peers.

"Talk of stagflation is rife in the UK media, and GBP perma-bears, an ever-present market feature since the 2016 Brexit vote, have reemerged with confidence after spending most of 2021 until now in a subdued state," said Jalinoos.

Savouri says the Pound and the UK-facing FTSE 250 index continue to suffer low valuations and are still cheap in his view, "not despite Brexit but because of it".