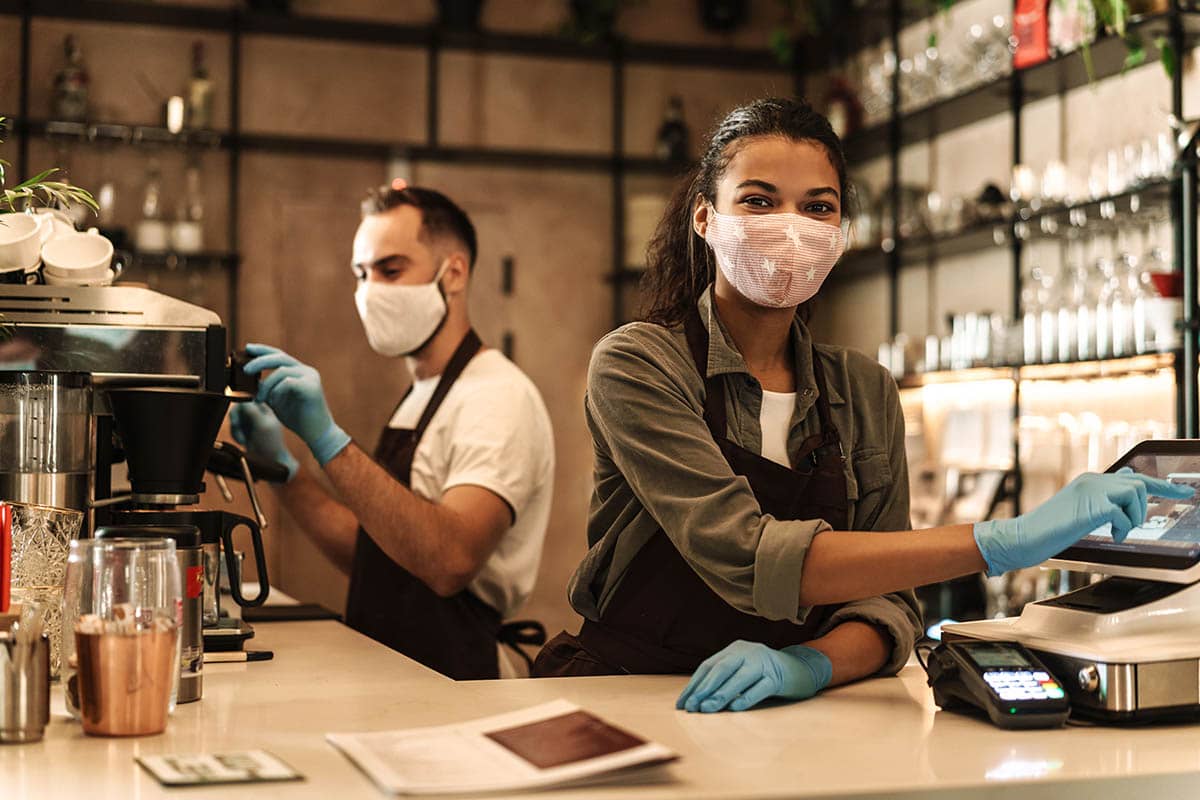 The British Pound rose in value against the Euro, Dollar and other major currencies after UK inflation rose faster than investors were expecting in October, according to official data.

The ONS said inflation rose 4.2% in October, its fastest increase in a decade, up from 3.1% in September.

The market consensus anticipated a reading of 3.9%.

"The level of inflation is going to keep getting worse over the coming months as supply stays stretched, demand stays robust and base effects technically push the rate of inflation higher," says Dan Boardman-Weston, CIO at BRI Wealth Management.

The Pound extended a recent run of outperformance, adding to the gains realised following a strong set of UK labour market statistics released on Tuesday.

"The pound is surging on the UK inflation data across the board," says Neil Jones, a dealer at Mizuho Bank in London.

Jones says he is now fielding some enquiries from clients on the chances of the Bank of England hiking more than 15 bps in December. 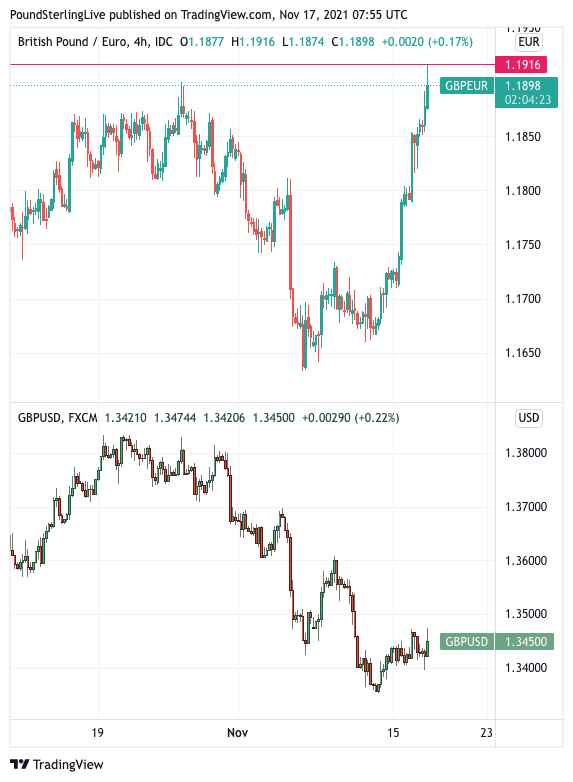 Above: GBP/EUR (top) and GBP/USD (bottom) at four hour intervals.

Commenting on the Pound's reaction to the inflation data, Neil Wilson, Chief Market Analyst at Markets.com, says Sterling has pared a lot of those initial gains vs the dollar.

"The dollar is something of a brick wall right now so maybe not the best gauge – the pound is doing much better against the euro, hitting its best level since Feb 2020," says Wilson.

The inflation numbers follow a strong labour market reading out on Tuesday, which both pressure the Bank of England to raise interest rates at the December meeting.

Such a move would place the Bank ahead of the European Central Bank and U.S. Federal Reserve in normalisation timings, offering yield support for the Pound against the Euro and Dollar.

"This is undoubtedly going to put pressure on the Bank of England to raise rates, which we suspect they will have to do in the next few months given the high levels of inflation and robust labour market," says Boardman-Weston.

"I am very concerned about the country's inflationary scenario," Governor of the Bank of England Andrew Bailey told the House of Commons' Treasury Select Committee on Monday.

Bailey's appearance before lawmakers - alongside three other members of the Monetary Policy Committee (MPC) - shored up expectations for a rate rise in December, even if markets still overwhelmingly favour February.

MPC member Michael Saunders, who voted to hike in November, said he thinks the risk of a general increase in inflation is substantial enough to justify hiking rates now.

"Inflation will overshoot if policy is not tightened," he said, but added inflation will not return to the same level as the 1970s.

"The pound was supported by yesterday’s positive UK labour market report and this morning’s inflation data. It has rallied in particular against the euro, with GBP/EUR increasing to 1.19, helped also by soft European data. The rise was less marked against the US dollar, although GBP/USD has stayed above 1.34," says Hann-Ju Ho, an economist with Lloyds Bank.

UK inflation rose on the back of a surge in utility bill prices and ongoing global supply chain constraints, all of which are expected to recede later in 2022.

Utility prices rose 11.9% month-on-month following the rise in Ofgem's price cap, which pushed up utility price inflation from 2.8% to 22.9%.

But domestically generated inflation was also on the increase, and this is what the Bank of England will be more interested in, with core CPI rising 3.4% year-on-year in October, ahead of the consensus expectation for a 3.1% rise.

Increases in core inflation come off the back of rising VAT, which went from 5.0% to 12.5% on October 01 as tax breaks for the hospitality and tourism sector come to an end.

Input inflation at the country's factories and manufacturers remains acute with PPI input prices rising 13.0% year-on-year in October, above the 12.1% consensus was looking for and the previous month's 11.4%. 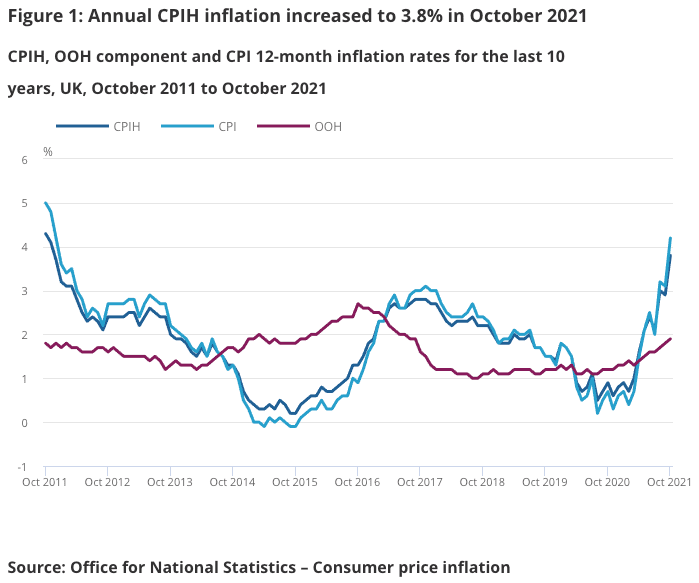 October's inflation surge was the biggest since April 2011 when oil prices jumped to $123 per barrel of Brent crude.

This time around, however, inflationary pressures are much more broad-based says Kallum Pickering, Senior Economist at Berenberg Bank.

"They are driven by the combination of a rapid recovery in domestic demand, widespread global supply shortages as well as the UK’s unique Brexit challenges which raise the cost of trade with the EU, the UK’s biggest trading partner," he said in a post-release note to clients.

Following the data release money market pricing for a 15 bps December hike was at 60%, which represents a steady increase on this time last week when odds were set at 50/50.

It would seem however the market still prefers a rate hike in February, where odds are set at +100% levels.

"The upside surprise in the October inflation data supports our expectation that the BoE will hike the bank rate by 15bps to 0.25% at its next MPC meeting on 16 December," says Pickering.

Looking ahead, "high inflation is here to stay in the short-term," says Hannah Audino, economist at PwC UK.

"It will take time for global supply bottlenecks and shortages to normalise and energy prices to stabilise," she adds. 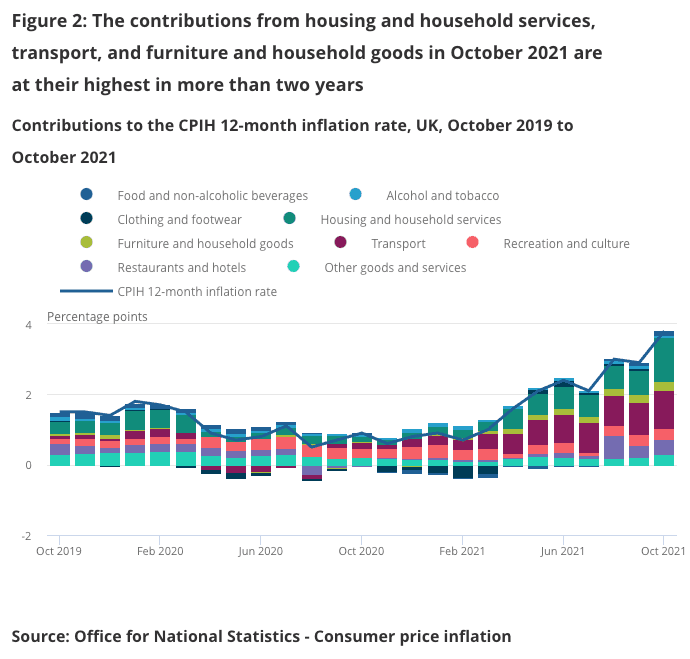 PwC finds CPI could peak between 5-6% in the second quarter of next year as a rise in the energy price cap and the reversal of VAT cuts in hospitality and tourism create the perfect storm for higher consumer prices.

The Pound could be higher were the market more assured that the Bank would raise rates in December: however, the decision to keep rates unchanged in November despite offering up strong hints that a hike was coming over preceeding weeks has introduced some caution into the market.

"Coupled with the strong employment data yesterday, the case for the Bank of England to act now is compelling," says Market.com's Wilson. "That does not, however, mean a hike next month is a done deal – unreliableness breeds uncertainty even when it seems obvious."

Wilson sees reasons to doubt the Bank will act:

1) there are still plenty on the MPC who are wedded to the transitory narrative – the Hawks v. Doves balance favours the latter camp still as the 7-2 vote indicated,

2) does the Bank think that hiking now would amount to a policy mistake a la Trichet? If so then even if they do feel that inflation is becoming unanchored and problematic, they may chicken out of hiking due to fears of killing off the recovery, and

3) do other risks to the economic outlook like Brexit mean hiking is simply not appropriate at this time?

"Whatever they think, the problem for the market is in not being able to trust statements about 'acting on inflation,'" says Wilson.