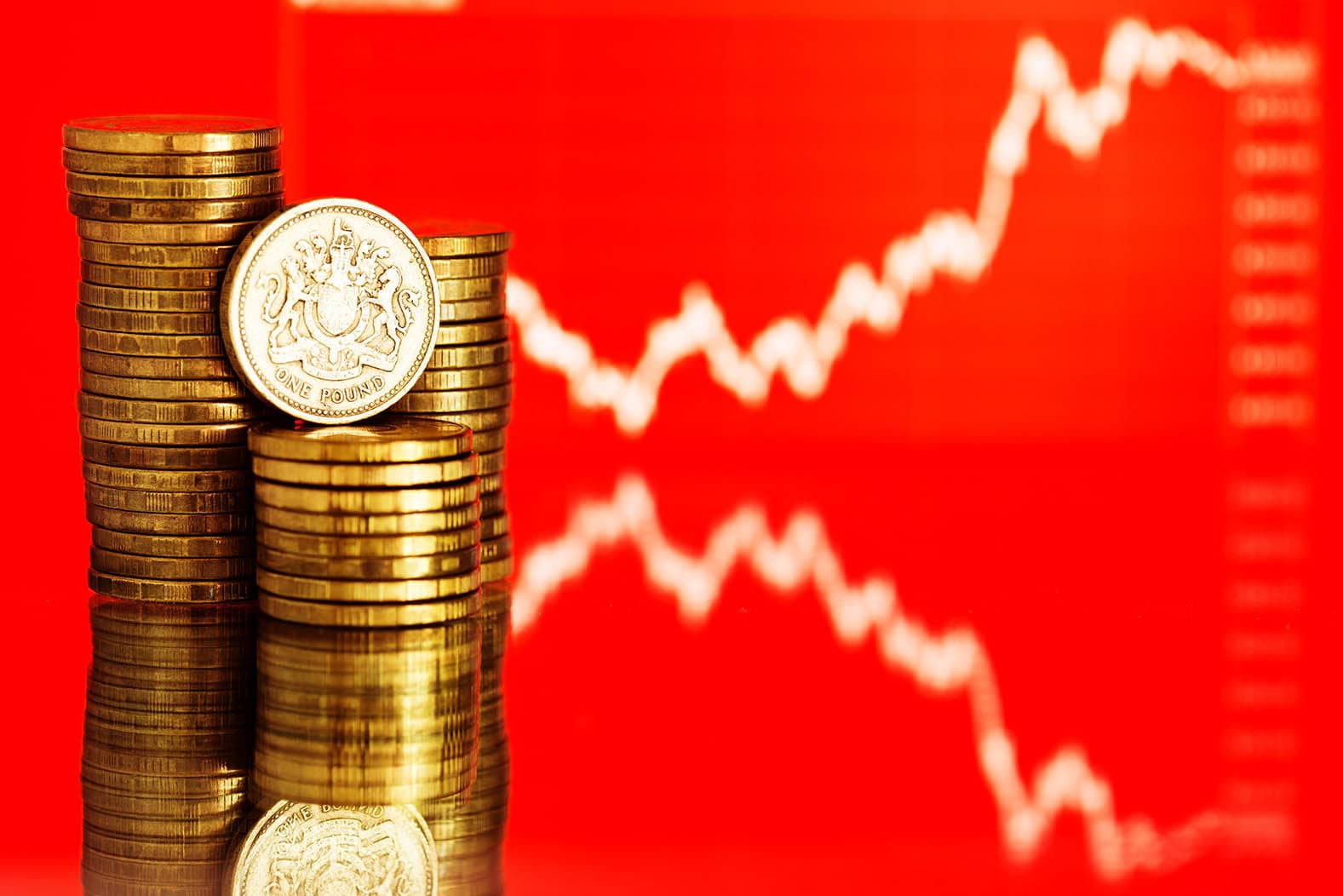 Pound Sterling was sold after the Bank of England opted to keep interest rates unchanged at its November policy meeting but indicated it could still raise interest rates in the near future, an expectation that could limit declines in the UK currency.

However there is a deep sense amongst some economists that the Bank's credibility has been harmed by its recent behaviour.

Members of the Bank's Monetary Policy Committee (MPC) - including Governor Andrew Bailey - have since August sent strong signals that a rate hike in November was a high possibility; communication that lead money markets to fully price a November rate hike by October.

But only two members of the MPC ultimately voted for a hike at the November meeting - incredibly Bailey wasn't one of them - and the bulk of the policy guidance issued by the Bank suggested a rate rise before year end now looks less unlikely.

This comes as a massive anti-climax for Sterling exchange rates which have understandably gone lower as near-term rate hike expectations are erased.

"The 'unreliable boyfriend' is back," says Viraj Patel, a strategist at Vanda Research.

Patel describes the policy event as "dovish across the board".

"The MPC decision was no surprise to me. Consistent with the pattern of ducking difficult decisions over the past decade. What is the point of an independent central bank when it is so timid and toothless?" says Andrew Sentance, Senior Adviser at Cambridge Econometrics.

"With inflation set to surge to 5 percent or more, record skill shortages, global supply shortages, surging energy prices, continuing fiscal stimulus, the Bank of England sees fit to keep interest rates at 0.1% - a historical record low. How can this be justified?" he asks.

The report showed the Bank sees inflation peaking soon, which signals they are not overly concerned about a prolonged period of above-target inflation that would warrant higher interest rates.

Further dovish signals came from a series of GDP downgrades in the Monetary Policy Report which contained the Bank's quarterly economic forecasts.

But analysts at Danske Bank says the decision can be interpreted as a "hawkish hold" in the sense that Bank thinks it would be appropriate to hike in coming months.

If the market comes around to this assessment and prices in a December rate hike the Pound could see some downside protection.

"The MPC made clear that a rate hike was coming soon, though it also sent a clear message that the pace of tightening was likely to be much less aggressive than markets anticipate," says Andrew Goodwin, Chief UK Economist at Oxford Economics. 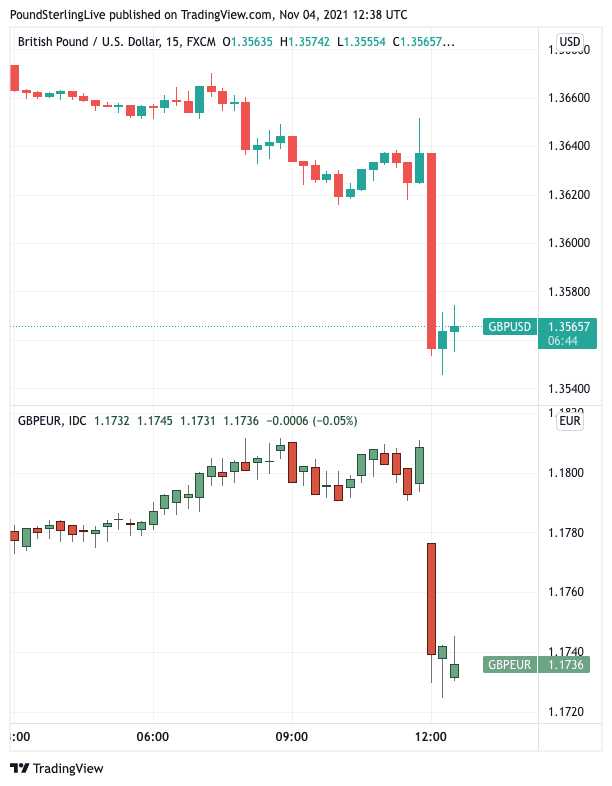 Above: GBP at 15 minute intervals against the USD (top) and EUR (bottom).

The Bank's decision to delay raising rates looks to be firmly squared on the need to see how the labour market performed following the ending of the government's furlough scheme in September.

"Whether the BoE hikes in December or February is finely balanced," says Goodwin. "We slightly favour February, on the basis that there’ll be little hard evidence on the impact
of the end of the furlough scheme by the December meeting."

The data is due out on November 16 and should show to what degree unemployment rose after the government ended paying firms to keep employees on their payroll in the wake of the economic crunch brought on by Covid.

"The Committee has played it safe by opting to wait for key labour market data, relating to the period since the furlough scheme has been wound down, to be published just before its next meeting on December," says Samuel Tombs, Chief U.K. Economist at Pantheon Macroeconomics.

The prospect of a December rate hike will remain an odds-on outcome should the labour market provde more robust than expected.

The statement said "it would be necessary over coming months to increase Bank Rate in order to return CPI inflation sustainably to the 2% target." 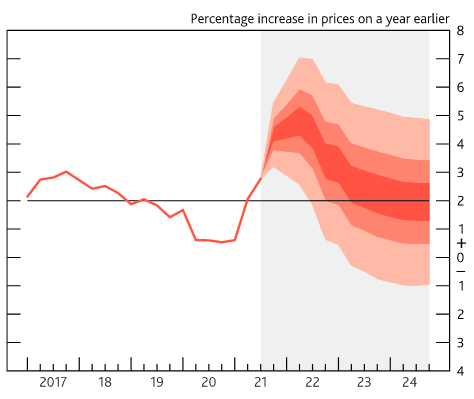 Above: CPI inflation projection based on market interest rate expectations, other policy measures as announced.

"Its forecast for quarter-on-quarter GDP growth of 0.9% in Q4 looks about right to us, so a near-term rate hike still looks likely," says Tombs.

Inflation forecasts contained in the Monetary Policy Report were always set to be a key element of the day given they would send an implicit signal as to the requirement, or lack thereof, to raise interest rates.

The MPC predicts that CPI inflation will be 0.23% above the 2% target in two years’ time and only 0.05% below target in three years’ time, if Bank Rate rises in line with markets’ expectations.

This would go some way in firming expectations for further rate hikes.

But given how wrong markets were in expecting a rate hike today investors will prove more cautious in accepting the Bank's communication going forward.

"What was even more dumbfounding was that having set this hare racing a few weeks ago, Bailey voted to keep rates unchanged as well, with the statement also saying that a rate rise was likely in the coming months," says Hewson.

Hewson says the decision to guide markets towards a rate hike and then pull the rug is "a huge own goal for the central bank, already widely distrusted by the markets due to the unreliable boyfriend era of Mark Carney."

"Bailey had the opportunity to reset the narrative when he took over and restore the central banks credibility, and he’s completely bodged it in a fashion that is more Bill Bailey than Andrew Bailey," says Hewson.

This inflation forecast is conditioned on an assumption that the Bank Rate will be at 1.1 % in the fourth quarter of 2023.

But the market's assumptions and reality are undergoing a significant adjustment following today's policy decision as Bailey has indicated he was not in agreement with an assessment that rates would peak above 1.0%.

Rate hike expectations will therefore come down significantly over coming days and weeks, keeping the Pound under pressure.

"Today’s minutes sent a clear message that this path was too aggressive by highlighting that the BoE’s forecast based on inflation expectations shows inflation below target at the end of the forecast period and trending lower, with spare capacity beginning to develop," says Goodwin.

Above: Inflation falls below target over a three year horizon and spare capacity (excess supply/excess demand) begins to develop IF the market's expectations for rate hikes to above 1.1% are met.