The Pound is tipped to benefit as the Bank of England raises interest rates at a faster pace than the market currently realises, thanks to a strong economy as reflected by surging job vacancies.

"Readers could be forgiven for being hugely concerned over the UK’s economic outlook; fearing its growth will fail and inflation flare," says Dr Savvas Savouri, Chief Economist for Toscafund Asset Management.

But, Savouri, a noted academic and economist who has served at a number of City institutions, says:

"Drawing on every aspect of my education and experience convinces me the UK’s economic future is set as fair as I have ever seen."

In a new discussion paper regarding the UK economy Savouri says perhaps the most important metric to watch is the Adzuna jobs vacancy data series issued by the ONS, a relatively new component of the country's official economic data mix.

As of September 10 the Adzuna data set showed the total volume of online job adverts was at 128% of its February 2020 average level.

Savouri says the timeliness and breadth of the Adzuna data is proving to be a highly useful tool in understanding the capacity dynamics of the modern British economy.

For Savouri indicators such as GDP and CPI inflation are of the 'old school' type that were useful for planners during the economy's more industrialised path.

But the modern UK economy is one that is dominated by services and a highly mobile workplace subject to fluid workplace boundaries, making measuring output incredibly difficult.

The problem facing economists and the Bank of England alike is that the Covid crisis and Brexit - which struck simultaneously - have altered the shape of the economy once more, creating a risk that the currently favoured economic measurement tools become even more outdated.

The Adzuna vacancies series were one of the new measurement tools of real-time data co-opted by the ONS to assess the health of the jobs market during the crisis and through the ensuing recovery. 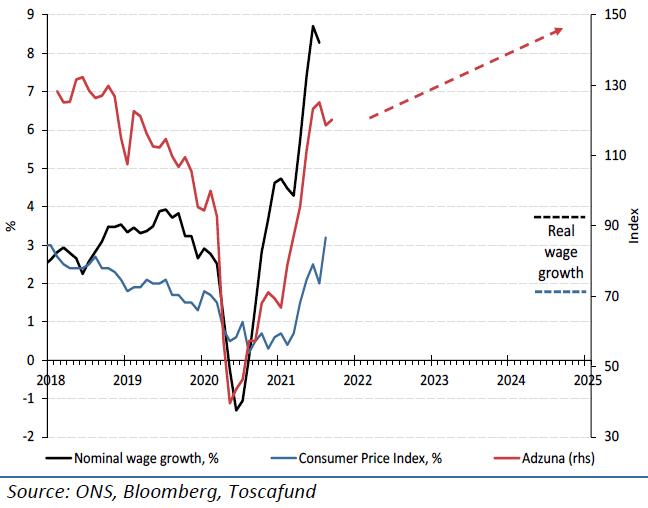 Above: Adzuna vacancy vs. wage & CPI growth, with forecasts, image courtesy of Toscafund.

What real-time job vacancies are telling Toscafund's research team is that the combination of the coronavirus crisis and Brexit have structurally altered the UK economy and labour market to the extent that wages will rise more aggressively in response to labour shortages than had been the case in the past.

Savouri anticipates the UK economy to record a strong rebound in jobs and wages over coming months, based on the data he is seeing.

The Bank of England is meanwhile expected to react to the improving economy by raising interest rates at a more rapid pace than is currently anticipated by markets.

"With the MPC quickly seeing the UK economy exiting strongly, it will beat expectations by discharging the base rate from the emergency level ward," says Savouri. 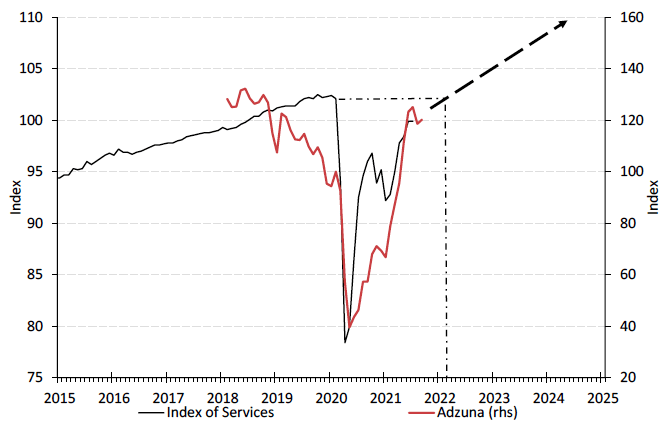 Index of Services vs Adzuna vacancy, with forecast. Image courtesy of Toscafund.

Savouri says members of the Bank's Monetary Policy Committee will find with the UK out of the EU’s Single Labour Market (SLM) and operating a "truly international work visa system, its Phillips Curve will work again and so too the unemployment rate as a forward guide to inflationary pressure."

The Phillips Curve explains how wages rise as unemployment falls, therefore central banks have tended to look at falling unemployment as precursor to higher inflation levels in the future.

Indeed, in Carney's early days at Threadneedle Street policy guidance suggested interest rates could begin to rise when unemployment started moving below 7.0% as this would move the dial on wages.

However even by the time wages reached 5.0% wages and inflation proved stubbornly unresponsive.

Savouri says Carney and his team failed to recognise that the UK's presence in the European single jobs market meant labour supply would inevitably increase in response to any wage rises:

"Carney should have realised that by 2013 the UK labour market was a vastly different place than it had been in the time of Phillips and, indeed, when I was beginning my career in economics in the mid-1980s."

"What had once been an essentially univariate relationship linking the UK’s unemployment rate to UK wage inflation had become far more expansively multivariate," he adds.

Fast-forward to 2021 and the UK is out of the single market and operating under a new points based immigration system which Savouri says will be more equitable to foreign workers external to the EU.

He also expects a large number of EU nationals eligible to work in the UK to return.

But importantly, "those arriving will be tailored to bring the talents the UK economy has in greatest excess demand."

"I have no doubt that with the playing field now perfectly fairly even, numbers arriving to the UK for work will not fall, but even-up. Level-up that is in relation to those originating from inside and those outside the EU," he says. 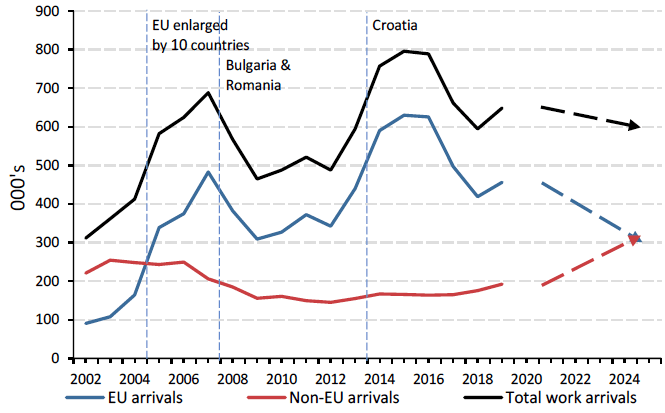 Above: Yearly work arrivals to the UK, with forecast. Image courtesy of Toscafund.

Savouri says the UK economy's ability to generate jobs will generate inflation on a more sustained basis than has been seen in recent years.

"We can NOW treat the UK unemployment rate as a reliable forward guide for the base rate," says Savouri.

"Adzuna data genuinely promises to be the pathfinder for monetary policy makers and those keen to prepare for their actions," he adds.

Toscafund anticipate that a pre-emptive rate rise based on the advance forward guidance coming from Adzuna, and confirmed by other reliable vacancy signals, would actually lower the peak to which the UK base rate would need to reach in the next up-cycle.

"I have no hesitation in claiming the UK base rate will begin its journey out of emergency territory far sooner than the consensus is claiming," he says.

And what does this mean for the Pound?

The rule of thumb in currency markets is that a central bank that raises interest rates sooner and more aggressively than its peers will see the currency it issues appreciate.

Indeed, the Pound is forecast by Toscafund to appreciate markedly over coming months and years.

"As the UK base rate is moved sensibly, albeit only moderately, higher earlier than being forecast, we should expect the pound to finally begin to reclaim the ground it lost with the ‘shock’ referendum result of June 2016," says Savouri. 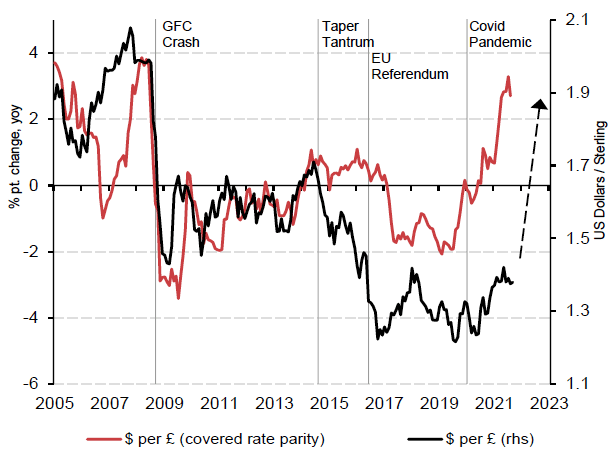 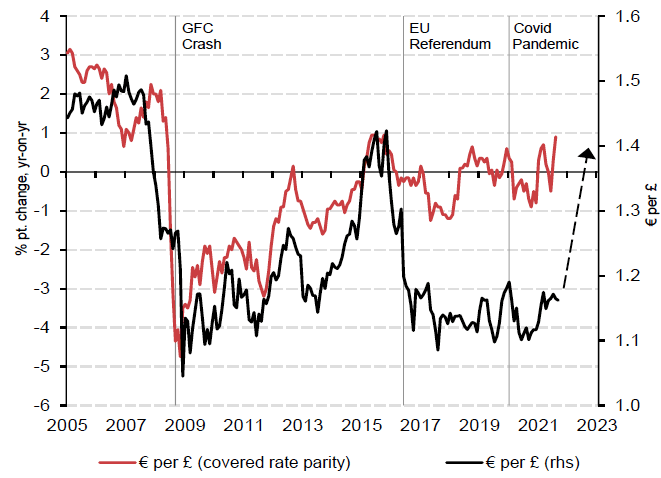