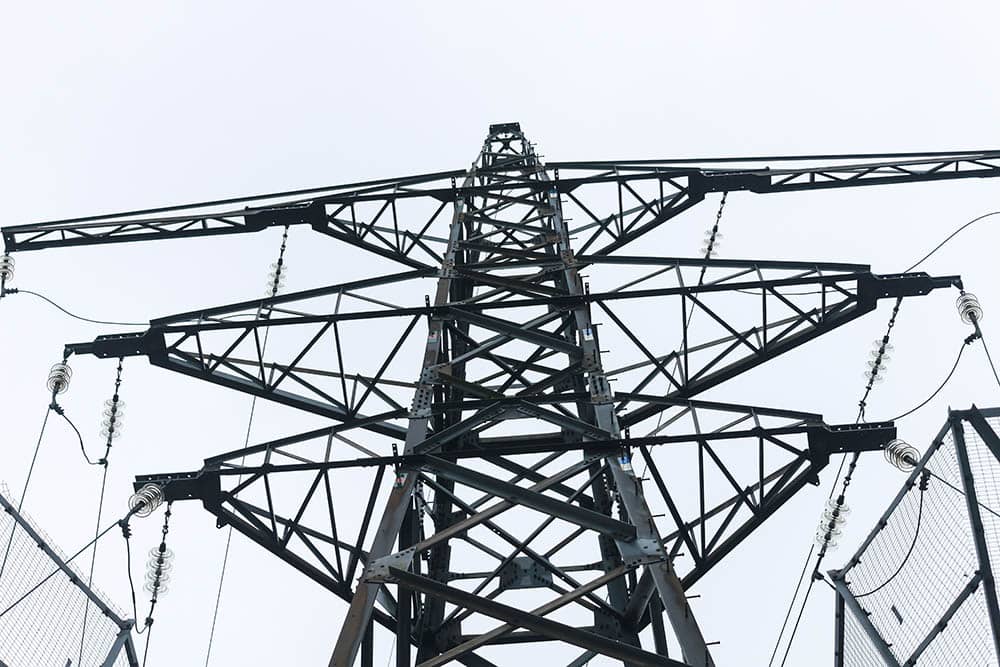 UK energy prices have moved higher over recent weeks amidst a global and domestic supply squeeze, however they rocketed on Wednesday after a fire at an electricity import station in Kent.

Gas prices went through the roof on Wednesday after the UK's main electricity subsea cable with France, located in Kent, reported a fire had broken out and would be evacuated.

Traders bet that an already tight UK gas market would be squeezed by a further drawdown in stocks as more domestic gas generation capacity was fired up.

National Grid said on Wednesday the fire would mean 1 GW, or half of capacity, would remain offline until 27 March 2022.

With European gas supply already under significant pressure an uncomfortable situation could evolve into a full-blown energy crisis that will have implications for for the economy and the British Pound says an institutional analyst.

"The UK remains a net importer of fuels, running a small surplus in oil trade and a slightly larger deficit in natural gas," says Shreyas Gopal, Strategist at Deutsche Bank.

"The UK's reliance on imports has undoubtedly increased this year," he adds. 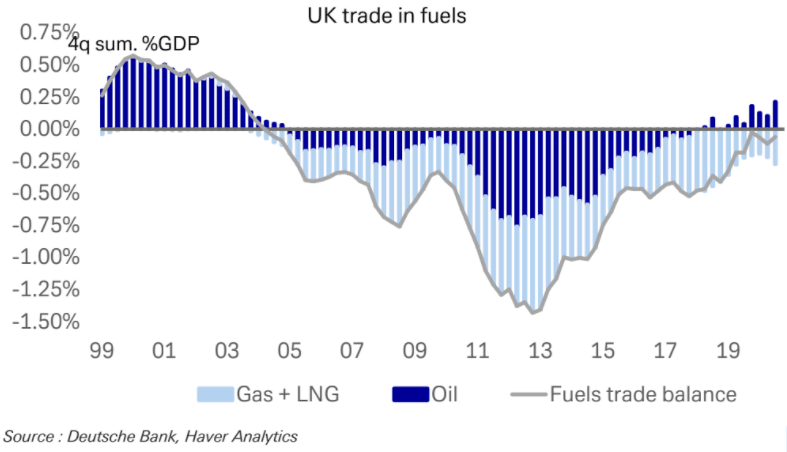 Above: "UK runs a larger trade deficit in gas than its surplus in oil" - Deutsche Bank.

Deutsche Bank find higher-frequency estimates to indicate a deterioration in the UK's terms of trade is underway.

"Even before the material price surge over the past few weeks, UK energy production had already been suffering so far this year," says Gopal.

Government data showed gas production was down 23% versus the same period in 2019.

Since June, the fall in production has accelerated, now down 28%. 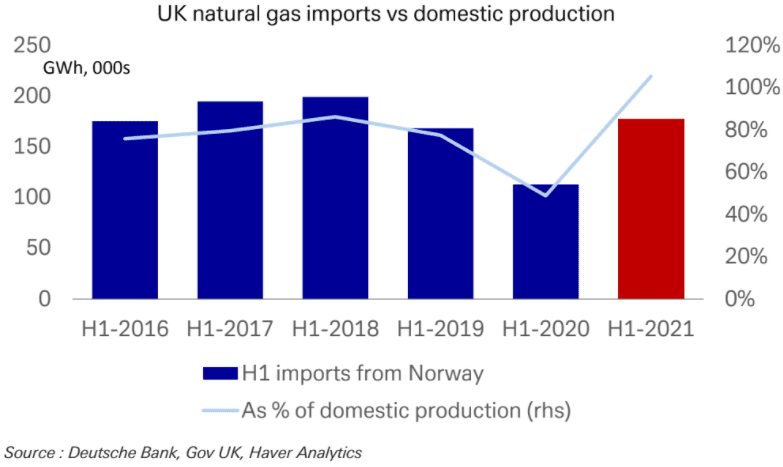 Above: "UK had already started to import more gas from Norway than it produced domestically in H1 this year" - Deutsche Bank.

Deutsche Bank note gas imports from Norway surpassed the UK's own domestic production over the first half of the year.

"The recent sharp commodity moves may partially explain the NOK's relative outperformance against the GBP in recent sessions," says Gopal. 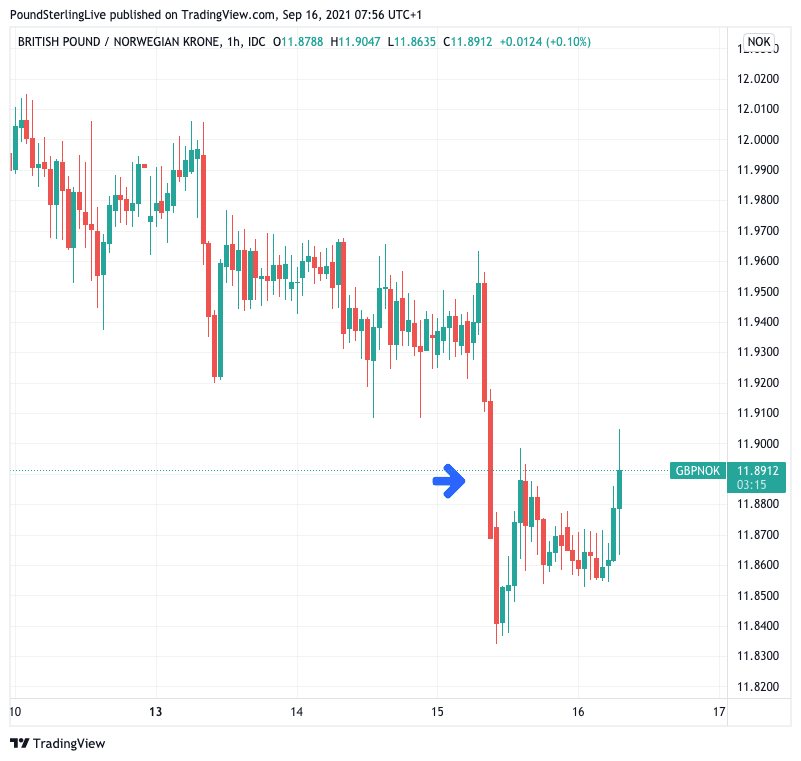 Calculations by Deutsche Bank find the UK's trade deficit in gas in the forthcoming quarter could reach -0.75% of GDP.

The assume total demand is the same as in the fourth quarter of 2019 (252k GWh), but that UK domestic production falls to 50% of the corresponding period two years ago.

They also assume that prices remain at current levels, over double the price of two years ago.

"This would represent a moderate widening of the UK's current account deficit, which stands at just over 3% of GDP over the past four quarters. To be sure, our estimate likely represents an upper bound, but at the least it suggests that the gas price increase will be worth monitoring over coming weeks," says Gopal.

What does this mean for the Pound? 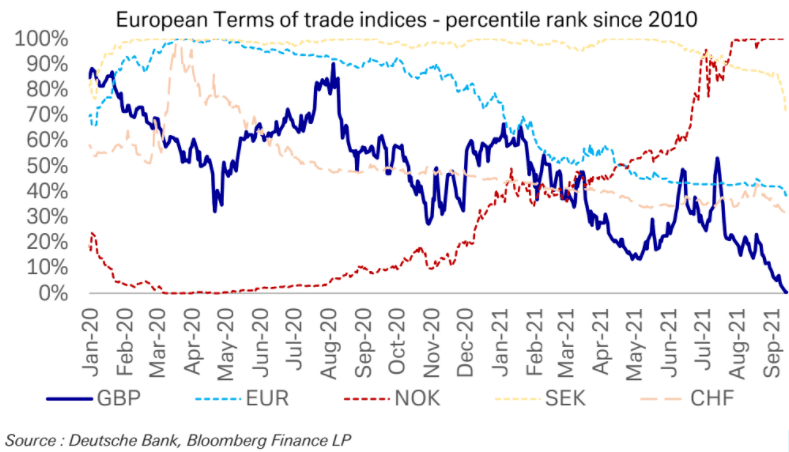 The prospect of higher-than-expected inflation levels in coming months would typically be supportive as it beckons higher interest rates at the Bank of England.

However, Deutsche Bank argue that an energy crunch in fact acts as a supply-side constraint to the economy which is effectively a negative input into Pound Sterling valuations.

"Like Brexit and Covid, the gas price surge represents another supply side shock that sterling is likely to attach a higher weight to than the rates market," says Gopal.

"The direct negative impact on the UK's external accounts from the gas price increase could be notable, while any hawkish BoE reaction is only likely to dampen trend-growth and weigh on the UK's terminal rate," he adds.

Deutsche Bank also note that while the Bank of England will raise rates ahead of the European Central Bank and Federal Reserve there remain few rate hikes visible on the horizon.

They say the recent moves seen in the Pound-Euro exchange rate is broadly consistent with their recent analysis:

"Although added front-end rates pricing is indeed positive for sterling, it is second order to the outright level and slope of the curve, both of which have moved in GBP's favour but to a lesser degree." 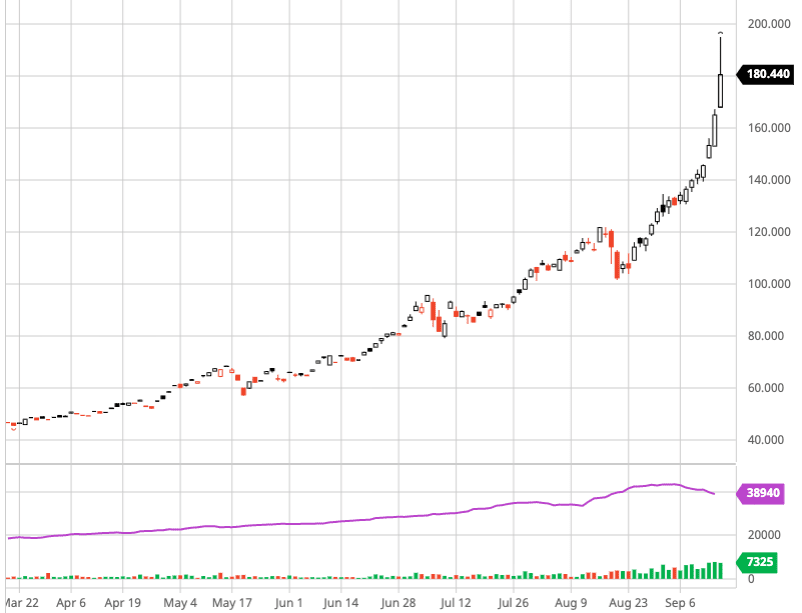 The energy crisis is by no means unique to the UK with Europe and the U.S. also feeling the effects.

"Surging energy prices remain a theme in markets with both gas and electricity prices through the roof. Lack of wind and rain has been a drag on electricity production in Europe," says Bjørn Tangaa Sillemann, Senior Analyst at Danske Bank.

In the U.S., gas production is still below capacity following hurricane Ida, which raged through Louisiana two weeks ago and hurricane Nicholas is hampering production further.

Sillemann says gas supplies from Russia have also slowed as their inventories were depleted from the cold winter and the finished Nord Stream 2 is still not transporting gas to Europe.

"As the weather is cooling in Europe surging gas prices already now is quite worrying," he adds.

"Europe, but to some extent the U.S., is undergoing an energy shock right now with galloping electricity and energy prices," says Peter Garnry, Head of Equity Strategy at Saxo Bank.