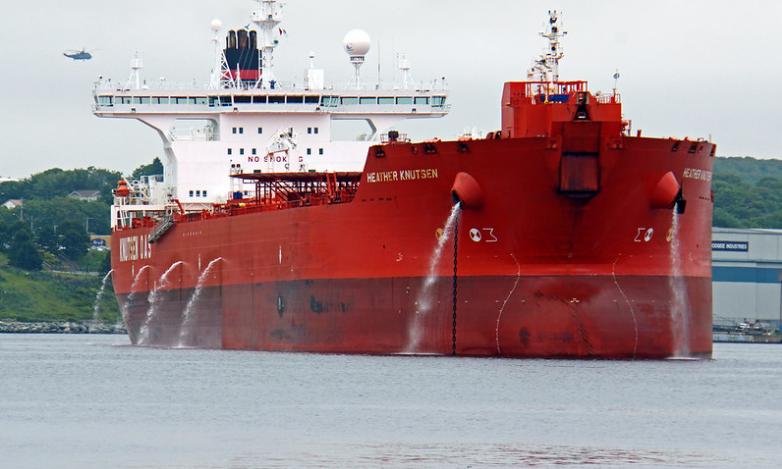 The Norwegian Krone meandered along the middle of major currency road Tuesday but could accelerate through the 2021 rankings this summer as Europe frees itself from a coronavirus vaccination mire, a global economic upswing lifts oil prices and the Norges Bank raises interest rates before any of its peers.

Norway's Krone advanced on many European counterparts Tuesday but lagged the oil-linked Canadian Dollar as well as the Australian and New Zealand Dollars, which gained tepidly as the U.S. Dollar struggled to maintain the near universal upward momentum seen so often over recent weeks.

Price action furthers the 2021 trend in which the Krone has lagged its 'high beta' counterparts from the Angloshphere, but this merely adds to the upside that could be seen over the coming months, especially if summer ushers in with it increased momentum in Europe's coronavirus vaccination programme.

"The stronger-than-expected economic recovery thanks to the effective lockdown strategy, fiscal support and stronger oil prices has supported Norges Bank’s hawkish monetary policy and thus the NOK. But further recovery might see headwinds amid the third Covid-19 wave, tighter restrictions, and relatively slow vaccination progress," says Yuan Cheng, a strategist at Natwest Markets. "The NOK has been tracking oil and the rally in oil prices."

Cheng and the Natwest Markets team forecast that 2021 strength in the Noregian Krone will push USD/NOK back to 8.27 and EUR/NOK to 10.05 by June, ahead of further gains into year-end, but acknowledged this week that a third wave of coronavirus infections in Europe leaves it dependent on oil prices for further upside in the short-term. 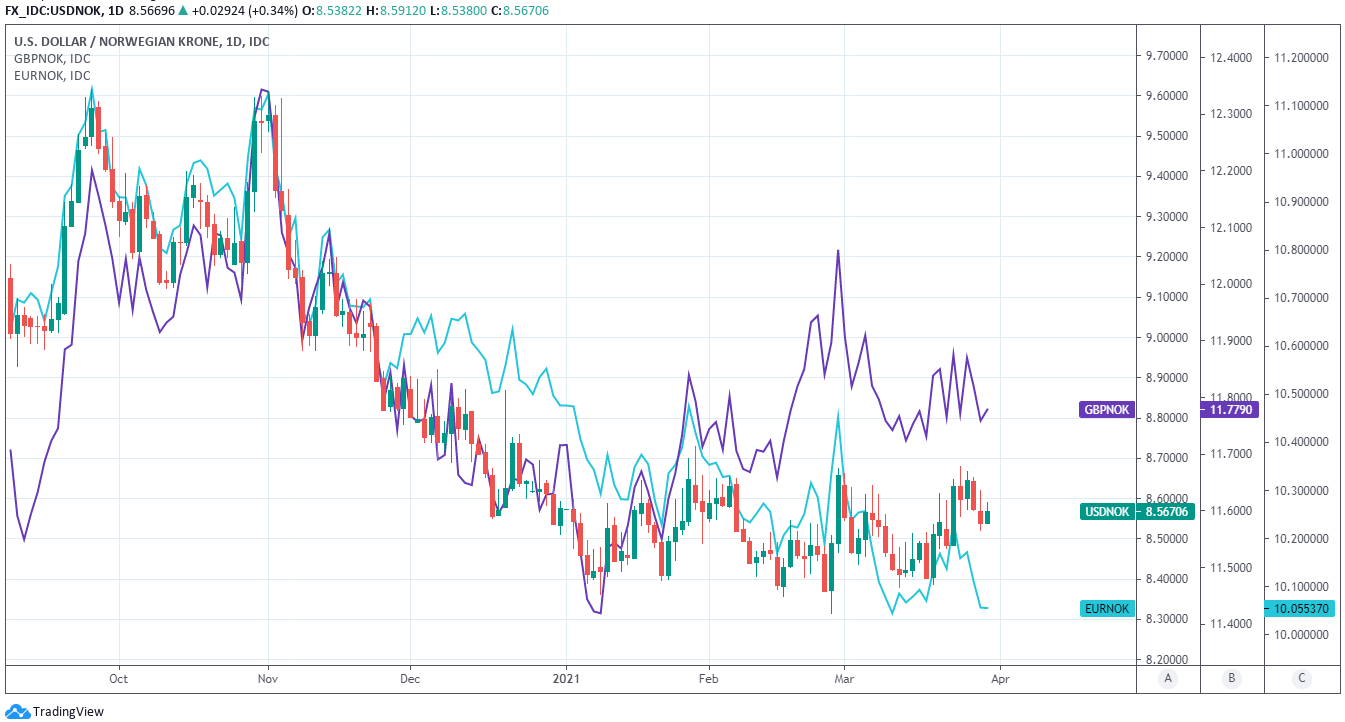 Above: USD/NOK shown at weekly intervals alongside EUR/NOK (blue) and GBP/NOK (purple).

Rising coronavirus infections and a resulting strengthening of containment measures come with Europe's economic recovery prospects already marred by vaccine procurement troubles and have further undermined investor appetite for many of the continent's currencies.

The Krone would benefit from any Organization of Petroleum Exporting Countries (OPEC) decision on production arrangements that is favourable for prices this Thursday, which would require the cartel to eschew further increases in output.

"Extended output cuts are possible, which could send oil prices higher," says George Vessey, a currency strategist at Western Union Business Solutions. “The giant container ship that was blocking the Suez Canal was freed yesterday, allowing the hundreds of vessels carrying oil, livestock and many more goods to finally continue travelling. The incident could disrupt global trade further though as congestion issues are expected to hit ports in Europe and Asia."

Thursday's OPEC decision is a wild card for oil-linked currencies but once beyond there the Norwegian Krone will be a contender for outperformance in April, a month in which it has a lengthy track record of appreciation against the U.S. Dollar and outperformance of many major peers.

"April starts with a good month for selling the USD, with GBP, NZD and NOK generally the outperformers. Probably tied to this is that April is also a strong month for equities and oil prices," says Jordan Rochester, a strategist at Nomura. "These are just the most obvious and FX-related seasonal trends which we have observed." 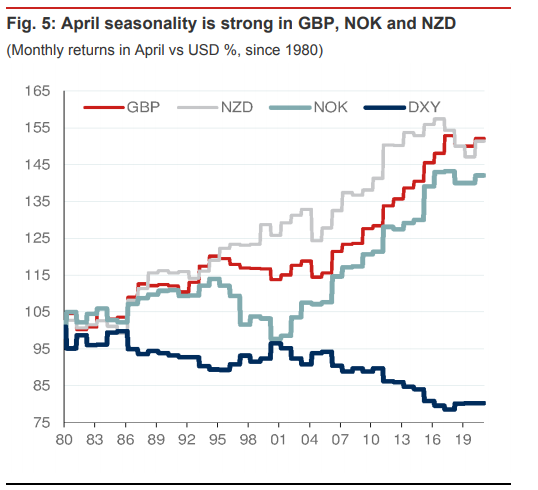 The Krone may also strengthen against the Euro next month and especially if the USD/NOK losses giving rise to its anticipated April gains take place in a market where EUR/USD is still underperforming, as EUR/NOK always closely reflects relative moves in the latter two.

Simultaneous falls in USD/NOK and EUR/USD are a recipe for marked losses in EUR/NOK. This and other Europe-facing Norwegian exchange rates are where the Krone is likely to see some of its strongest gains, which would have as much to do with the Norges Bank as anything else.

Inflation rose above the 2% target in January and reached 3.3% in February, which was far above the levels anticipated by the Norges Bank, and could rise even further as the economy reopens, pent up demand is released and economic "slack"  unwound later this year.

"Given that Norwegian inflation is highly sensitive to the exchange rate and therefore more volatile than in some other major economies, Norges Bank seems to place relatively more weight on slack in setting monetary policy," says Christian Schnittker, an economist at Goldman Sachs. "We continue to expect Norges Bank to hike by 25bps for the first time in December of this year, followed by another hike in Q1 next year." 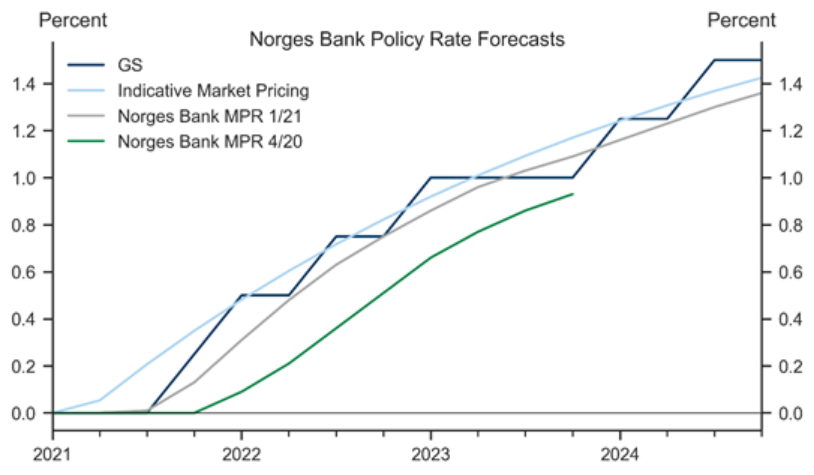 The Norges Bank is now gearing up to raise interest rates as a result, which is a typical policy prescription for curbing inflation, and far sooner than its peers.

Coming with oil prices back at pre-pandemic levels, the promise of higher rates might already have seen the Krone pulling ahead of Sterling and the Canadian Dollar in the 2021 rankings if not for the the trailing European vaccination programme, which threatens the bloc's economic recovery.

But this lag is storing up what may be even greater upside for later in the year because without an exchange rate rally inflation might risk forcing the Norges Bank to begin raising rates sooner than is perceived by the market as likely, which would then lead to a belated appreciation of the Krone.

Exchange rate moves are quicker to make their mark on inflation outcomes in Norway than elsewhere, which means that a rally by the Krone would augment the higher interest rate in its effectiveness as a means of curbing inflation - by cheapening the cost of imported goods.

This is something the bank itself may be attuned to as well as why the Nordic currency is a bit of a diamond in the European rough this year.