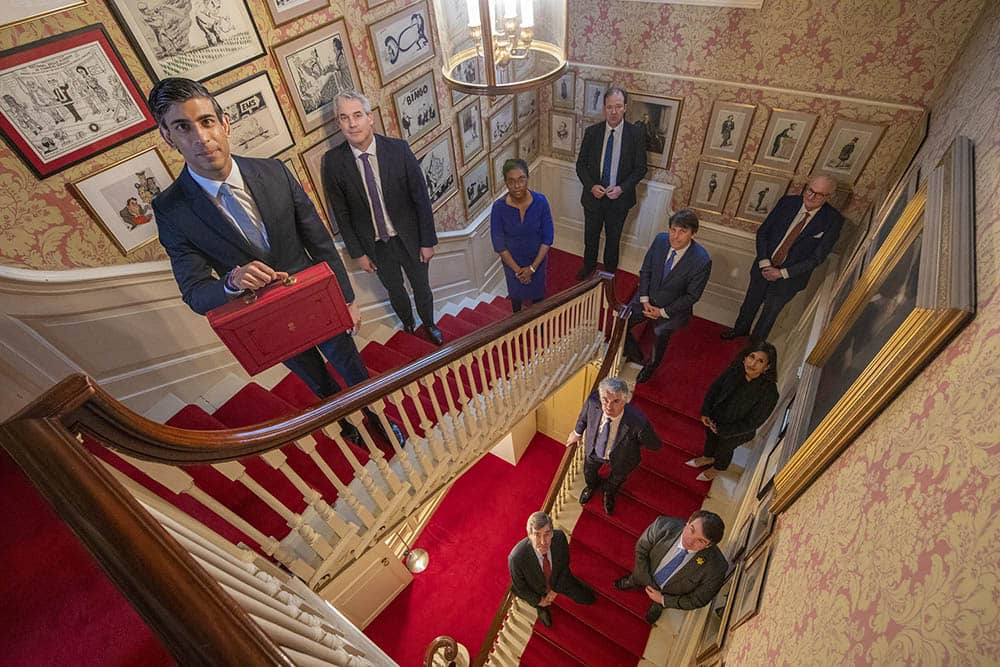 Above: The Chancellor Rishi Sunak together with his full ministerial team on the stairs of No.11 Downing Street before he leaves to deliver the budget. Copyright HM Treasury.

Chancellor of the Exchequer Rishi Sunak told Parliament that corporation tax would rise by 6% in 2023, thereby eliminating post-Brexit Britain's competitiveness in this sphere.

The Office for Budget Responsibility (OBR) says the planned tax hikes will increase the UK tax burden to the highest level since the late 1960s, with the tax burden rising from 34% to 35% of GDP in 2025-26.

However, the pain of the announcement was countered by the hike only applying to profits above £50K meaning only 30% of companies would likely be affected according to Treasury estimates.

A surprise came as Sunak announced a 'super deduction' on business investments that will allow firms to reduce their tax bill by 130% of the cost of the investment.

The OBR says the move will potentially boost investment by 10%, or £20BN more, per year.

Sunak said this is the "biggest business tax cut in modern British history".

"The non-leaked parts of the UK budget are very pro-growth/pro-investment. Almost makes this a much more palatable budget for FX investors than maybe just straight stimulus checks as in the US. A win-win budget for GBP," says Viraj Patel, FX & Global Macro Strategist at Vanda Research.

The Pound-to-Euro exchange rate was seen up 0.40% in the wake of the budget announcement at 1.1590 while the Pound-to-Dollar exchange rate was up 0.10% at 1.3963. Sterling rose against all the other major currencies with the biggest gains coming against the Aussie Dollar and Swiss franc. 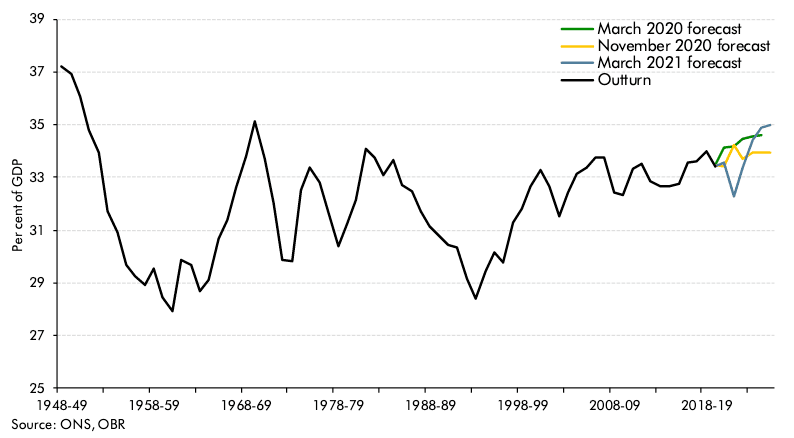 Above: The UK's growing tax burden. Tax as a share of nominal GDP, source OBR.

"The mixed messaging of more fiscal aid now but a future reckoning to come may leave GBP a little confused about where to go," says Daragh Maher, Head of Research, Americas, at HSBC.

The budget was nevertheless a net giveaway for the short-term that will see an additional £65BN made available, meaning the total additional spending and benefits made available during the crisis stands at £352BN.

The latest set of forecasts for the UK economy from the OBR shows the economy is to contract by 9.9% in 2020 rather than the 11.3% that had expected in the OBR's November forecasts. 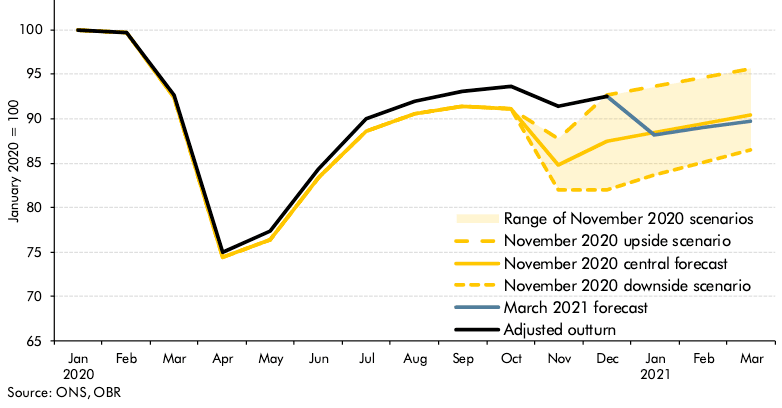 Above: Monthly GDP forecasts from the OBR.

The new forecasts show the economy is now seen regaining its pre-covid level by mid-2022, 6 months earlier than had been expected in November.

Predicted growth is 7.3%, which would be the strongest growth in 80 years.

The #Budget2021 impact in one chart $GBP pic.twitter.com/I6p9WcyB65

Paul Dales, Chief UK Economist at Capital Economics, says the Budget provides more near-term support to the economy than he had expected, but it also uses higher taxes from 2023/24 to reverse support quicker.

"The latter means the public deficit declines almost back to pre-pandemic levels by 2025/26. The implication is that taxes may not need to rise much further than currently scheduled. That’s especially the case if the economy turns out to be stronger than the OBR expects, as we think is likely," says Dales.

The extended support schemes (which include furlough & hospitality VAT cut) adds up to a loosening in fiscal policy relative to previous plans of about £54BN (2.6% of GDP) in 2021/22, according to calculations conducted by Capital Economics.

Calculations by Capital Economics show that from 2021/22 the increase in taxes and some cuts to current day-to-day spending of have a downward influence on PSNB.

Crucially, Capital Economics say a small part of that decline in borrowing is due to the upward revisions to the OBR’s GDP forecasts, mainly as the OBR stuck to its assumption that real GDP in 2026 will be 3% lower than it would have been without the pandemic.

This means assumptions of falling borrowing are built largely on future tax hikes.

"As such, further new announcements of tax rises may not be required," says Dales. "If we are right in expecting GDP to pretty much get back to the level it would have been in 2026 without the pandemic, then the Chancellor may find that in a couple of years he’ll be in a position to cancel or reverse some of the proposed tax hikes."