The Pound surged against all major counterparts Thursday, extending its 2021 lead in a somewhat mysterious outperformance of not only other currencies but also the market consensus, as it emerges that Sterling has benefited from an accelerating interest among "real money" buyers.

Proprietary measures of order flows from BofA Global Research show the Pound experiencing its strongest increase in demand from real money buyers and sellers of currencies during the first week of February, which reflects the strengthening of an earlier January trend.

Real money buyers include pension funds, insurance funds, real estate investment trusts, asset managers and other finance houses. These firms were collectively responsible for the strongest demand for Pound Sterling ever seen by BofA Global Research in nearly a decade of monitoring such flows.

"Our proprietary flows continue to show very strong demand for GBP. Last week, real money GBP buying was the strongest in our time series that starts in 2012, against both EUR and USD, and despite an already stretched long position," say Athanasios Vamvakidis and Michalis Rousakis, both strategists. "Hedge funds and real money are selling the AUD rally. Be cautious. EM flows and positioning remain mixed, but EMEA is in demand despite already long positioning."

These real money investors have bid so strongly for Sterling in the recent weeks that "positioning" is now stretched when compared with historical norms, which is typically taken by the analyst community to mean that demand from this segment of investors could soon begin to ebb.

However, the team at BofA Global Research have noted that hedge funds' participation in Sterling exchange rates was only a touch above its historical average last week. This could indicate further upside for Pound Sterling coming from that particular segment of the institutional investment community.

Sterling's performance has taken many by surprise, coming so soon after Britain's January exit from the Brexit transition period, the consequences of which are not yet known. Many analysts had anticipated that it would underperform other currencies in 2021, though the opposite is true thus far.

The Pound's largest gain has been over the safe-haven and low-yielding Japanese Yen, followed by the Swiss Franc, Euro and U.S. Dollar. Meanwhile, the recent surge in real money interest has come amid what many analysts characterise as a "positioning shift" among institutional investors.

This all follows a year in which Sterling was consistently found near the bottom of the major currency league table. It now tops that table for 2021 but despite this, still also carries losses against many majors over a one-year lookback. That could indicate scope for yet further residual upside.

Sterling's outperformance and the rise in investors' demand comes after the UK took the lead among major economies in the race to vaccinate populations against the coronavirus. It also comes after the Bank of England gave an upbeat assessment of the economic outlook on February 04 and showed confidence in its ability to reach the inflation target over the medium-term.

With around 25% of its population having received at least one shot of a two-shot vaccination in early February, the UK is potentially on course to reopen its economy and recover lost output sooner than others elsewhere in the world. This and its implications for the BoE's interest rate outlook is the more popular explanation among analysts, investors, traders and other observers for the Pound's ongoing outperformance.

Pound Sterling Live reported in December how the currency was becoming a then-contrarian's contender for outperformance this year, before speculating on January 31 that a turning of the tables could be pending. 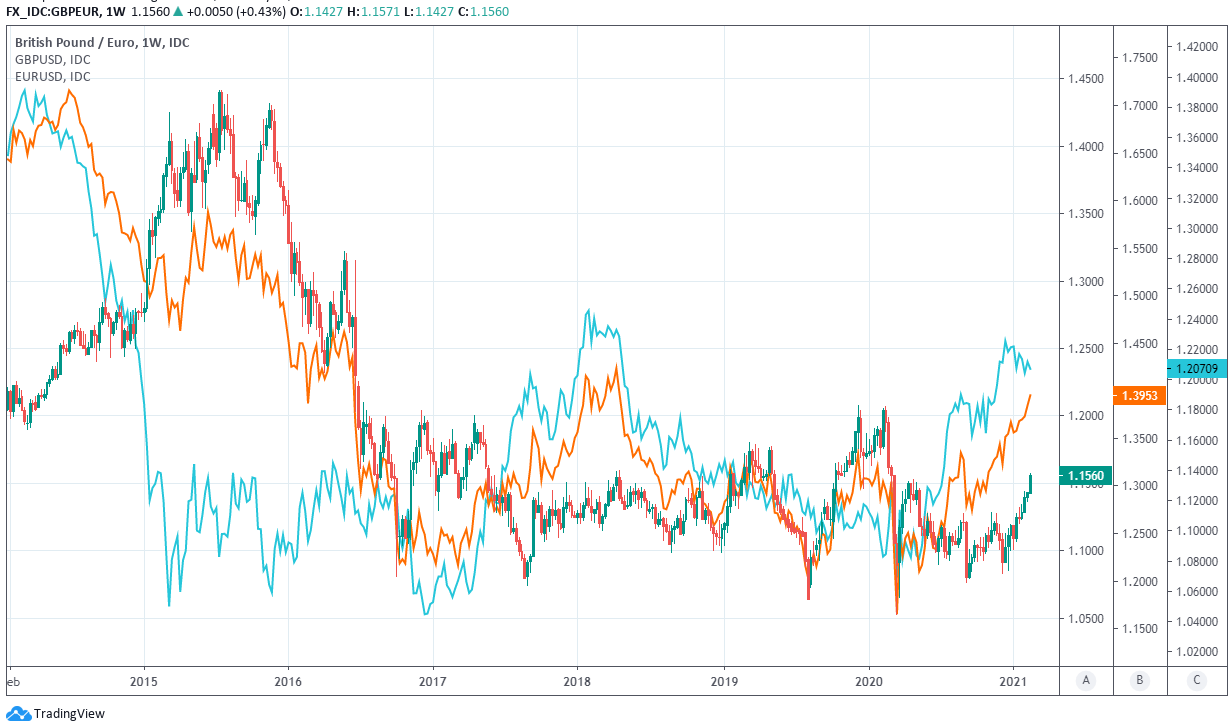 Above: Pound-to-Euro rate at weekly intervals, with GBP/USD (orange) and EUR/USD (blue).