In a material shift in sentiment, speculative interest in the British Pound has turned positive once more, with the values of trades positioned for upside moves in Sterling now outnumbering those positioned for a decline.

The development is interpreted by foreign exchange analysts as a sign that the market is turning a corner in how it perceives the Pound, as the foreign exchange trading community held net bets for a decline in the currency for much of 2020.

"Net GBP long positions surged to their highest level since March 2020 on speculation that negative rates may not be used by the BoE, at least imminently," says Jane Foley, Senior FX Strategist at Rabobank.

"Speculators may also be relieved by the skinny trade deal agreed between the EU and the UK and by the rapid vaccine roll out in the UK," adds Foley. 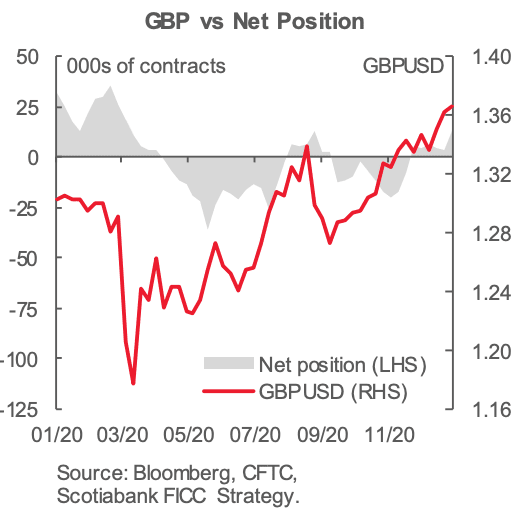 Pesole notes that both the Pound and Australian Dollar rallied significantly towards the end of 2020, as idiosyncratic factors (the Brexit deal for GBP and iron ore rally for AUD) contributed amid a generalised weak-USD environment.

Pesole adds that while the market has turned more constructive on Sterling, there is further room for that position to build before the market position rises to extremes levels; a scenario that sometimes results in sharp reversal in a currency's fortunes. 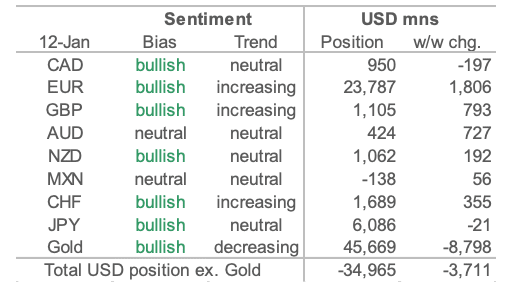 "Investors also warmed up to the GBP a bit more after the UK reached a trade agreement with the EU, eventually pushing Cable to (and a bit past) the 1.37 mark, building their net GBP long by an additional USD793mn (the second largest move on the week) to USD1.1bn—the biggest bullish bet on the pound since mid-March in USD and in net contract terms," says Shaun Osborne, FX Strategist at Scotiabank.

However, positioning analysis conducted by Crédit Agricole says Sterling is now overbought and likely to decline.

"The GBP was bought for most of the past week with real money investors and speculative-oriented investors such as hedge funds driving most of the latest development," says Valentin Marinov, Head of G10 FX Strategy at Crédit Agricole.

The analyst says long positioning is now well above its medium-term average and the currency has entered overbought territory as a result.

"From that angle, position squaring-related downside risk is high. This makes sense, especially considering strongly capped central bank rate expectations and as there is little scope for political uncertainty to ease further. All of the above is reflected in our positioning based model which suggests GBP/USD should be sold," says Oliveri. 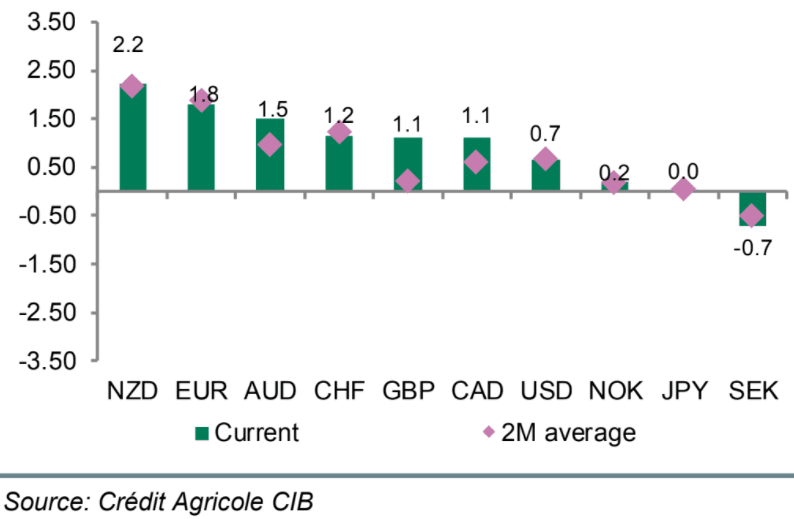 Apart from the sealing of an EU-UK trade deal, two other factors appear to be driving a rejuvenation in sentiment towards the Pound.

The ongoing vaccination drive in the UK puts the country well ahead of both the EU and U.S. in terms of vaccinations per 100 people, a development which could help Sterling in a world where foreign exchange investors rewards those currencies belonging to countries that exit the health crisis first.

"A successful vaccination programme could differentiate the UK from its peers and provide a bullish GBP bias in the medium to long term," says George Vessey, UK Currency Strategist at Western Union.

But how exactly does the vaccine rollout feed into a stronger Pound? The rollout of vaccines will ultimately determine when the UK economy is able to recover, which in turn influences decisions at the Bank of England on interest rates and quantitative easing.

The Pound rallied sharply last Tuesday in the wake of comments made by the Bank of England's Governor Andrew Bailey that the Bank Rate would not likely be cut to 0% or below over coming weeks.

The Pound had fallen in the first week of 2021 after UK leaders introduced stricter lockdown measures to contain the spread of covid-19, leading to expectations for the country to suffer an economic recession.

In turn, money markets raised bets that the Bank of England would respond by potentially cutting interest rates. The aim of lower interest rates is to stimulate lending and the flow of money to the economy, thereby providing a cushion during a difficult time.

But a side effect of such measures is however a weaker currency, as Sterling tends to fall when the Bank lowers interest rates.

Bailey's comments do however push back against these expectations and suggest it is too soon to consider further interest rates cuts as it appears the Bank is willing to wait and assess the shape of the economic recovery now that vaccines are being administered.