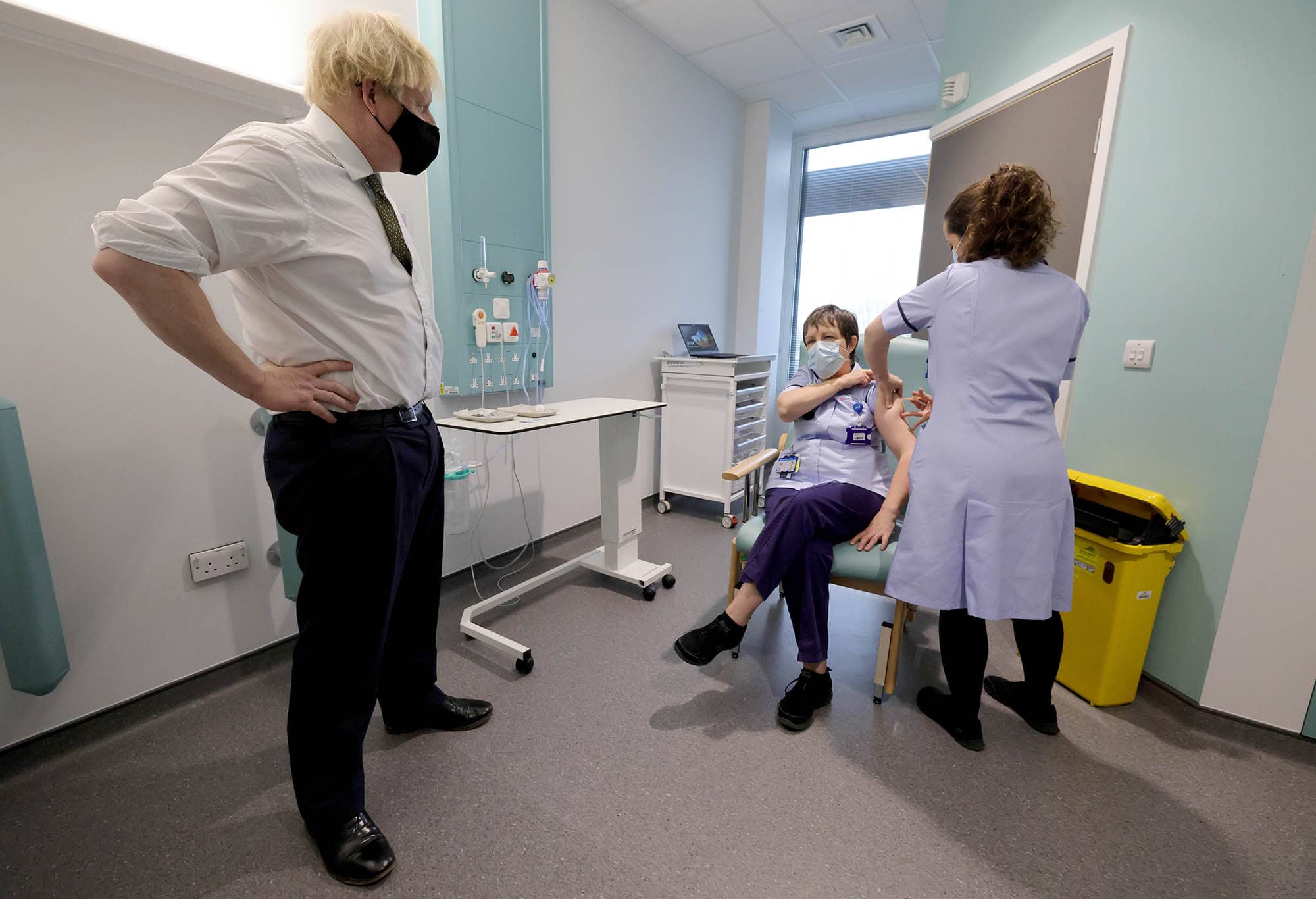 The UK economy could enjoy a "rapid" rebound in the summer, but only after a period of short-term pain, according to economists.

Sterling is currently hobbled by negative sentiment following the introduction this week of a third nationwide lockdown that is expected to result in economic contraction but a sharp recovery in activity and investor sentiment following the rollout of vaccines could aid the UK currency higher against the Euro, Dollar and other major currencies.

The Pound stuttered at the start of the new year after Prime Minister Boris Johnson increased restrictions to stem a rapidly advancing SARS-CoV-2 virus, the consequence of which will be a rapid slowdown in economic activity.

The Pound-to-Euro exchange rate dipped back below 1.11 on Monday to trade around the 1.1050 marker by mid-week, meanwhile the Pound-to-Dollar exchange rate sank back from fresh two-and-a-half year highs at 1.37 to quote at 1.3590.

"The resurgent pandemic and the subsequent economic restrictions are weighing on the Pound. The record-breaking daily infections of Covid-19 in the UK has been met with stricter lockdown measures, hindering economic rebound hopes, and outweighing the relief over the UK-EU trade deal," says George Vessey, Currency Strategist at Western Union. 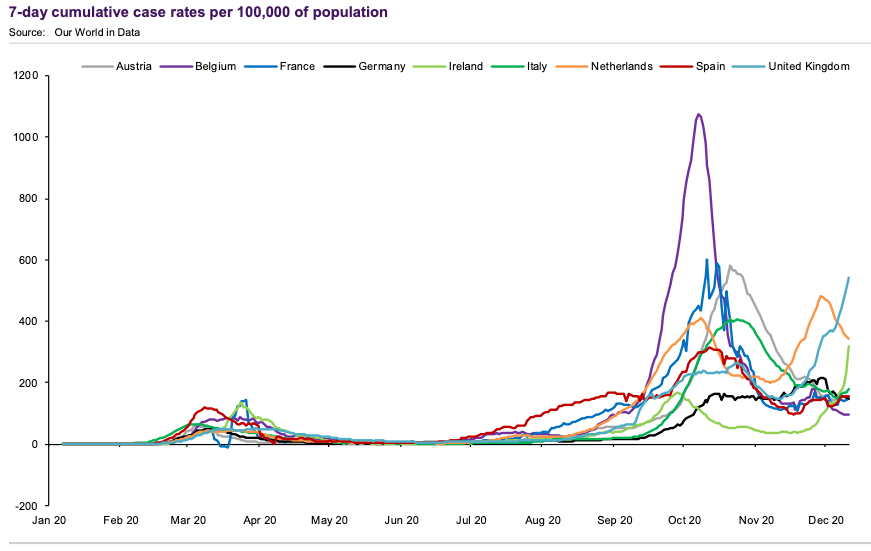 But one analyst we follow closely says the market could be reaching saturation point in its negativity towards Sterling, and a swing in sentiment for the better is possible over coming days and weeks.

"It's no surprise that the UK saw growth forecasts revised downward relative to everyone else while Brexit and COVID were navigated at the same time, but it does mean the newsflow has to remain unremittingly dreadful to keep up with sentiment," says Kit Juckes, Macro Strategist at Société Générale.

"If the new lockdown does work, and more so if vaccine deployment does go quickly from here inwards, Sterling could have a good year. In the meantime, it seems clear that a lot of gloom is priced in already," he adds. 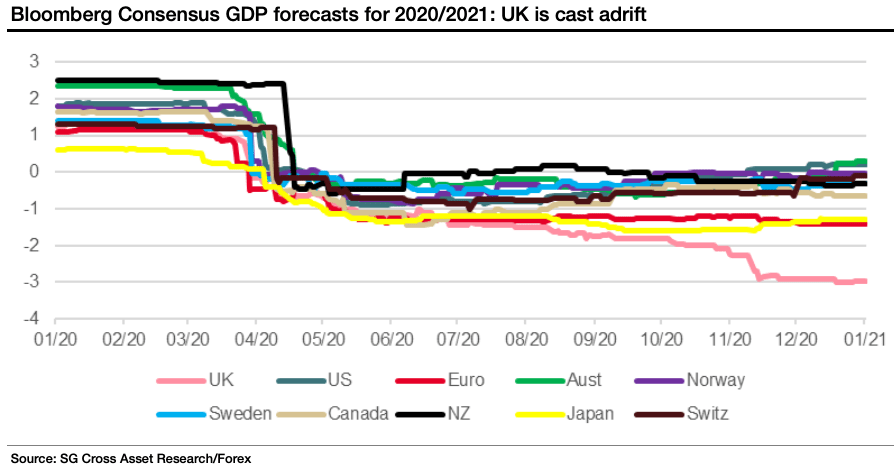 The first quarter of 2021 is looking to be a negative one for the UK economy, which could record a contraction in value owing to further restrictions that limit activity.

Owing to the new lockdown, the near-term outlook "now looks much worse than before," says Kallum Pickering, Senior Economist at Berenberg Bank.

Johnson told the nation on Monday night that both primary and secondary schools will be required to close for the foreseeable future, a decision that will knock a notable amount of growth out of the economy, as was the case during the March 2020 lockdown.

"While GBP is very cheap across many of our valuation models and much of the negotiation-linked uncertainty can fade, there is still significant economic underperformance and disruptions to follow early in 2021. So we start the year looking to sell GBP on rallies," says James Rossiter, Head of Global Macro Strategy at TD Securities.

The near-term pain is however widely expected by economists to give way to a rebound in growth, once restrictions are lifted on a permanent basis.

Prime Minister Boris Johnson has said he expects "tens of millions" of Covid-19 vaccinations will be given over the next three months, which will ultimately allow for the unlocking of the economy.

People across the UK started to receive the Oxford/AstraZeneca vaccine from Monday, when an initial batch of 530K doses of the UK-developed vaccine were made available.

Johnson said that "with a fair wind" behind it, the NHS could by the middle of February have offered the first vaccine dose to everyone in the four top priority groups identified by the country’s Joint Committee on Vaccination and Immunisation (JCVI).

"That means vaccinating all residents in a care home for older adults and their carers, everyone over the age of 70, all frontline health and social care workers, and everyone who is clinically extremely vulnerable," said Johnson.

However, there are concerns that the rollout has been slow and that unless significant advances were made the targets set by the government would be missed.

Indeed, it is reported four million Pfizer vaccines have been delivered, but as of last week only 1 million doses had been administered.

There are concerns that less than a million AstraZeneca doses are available this week, with batches awaiting final approval.

The Financial Times quotes one senior government official who says the government had failed to vaccinate as many as it had hoped to by the end of the year, but are confident that the 2 million weekly target will be achieved by the end of January.

But the official says a big jump in the volume of vaccinations carried out will be reflected when the latest data are published on Thursday: "This is a huge week, this week. You will see that reflected in the numbers."

The government has secured access to 100 million doses of the Oxford-AstraZeneca vaccine, expecting tens of millions of vials to be delivered over coming weeks once batches have been quality checked by the MHRA.

The government says more than 730 vaccination sites have already been established across the UK and hundreds more are opening this week to take the total to over 1,000, helping those who are most at risk from Covid-19 to access vaccines.

A rapid rollout of the vaccine over coming weeks could well shift sentiment in favour of the UK economy and Pound Sterling as the market is expected by some analysts to reward those countries that emerge from the crisis ahead of others.

Berenberg are now forecasting two consecutive quarters of economic contraction, meeting the technical requirements for a recession to be declared.

Owing to the new lockdown, the near-term outlook "now looks much worse than before," says Pickering.

The growth rebound in the second quarter of 2021 is however expected to be greater than originally anticipated with +9% expected, against the 6% growth forecast previously.

For the third quarter Berenberg anticipate 4.5% growth against the 2.3% forecast previously and the fourth quarter sees 1.3% forecast versus 0.9% previously.

"Despite the near-term hit, the UK medium-term outlook remains positive. With much less Brexit uncertainty and strong gains in global demand ahead, UK real GDP can still recover to its pre-pandemic level by the end of 2022 as previously expected," says Pickering.