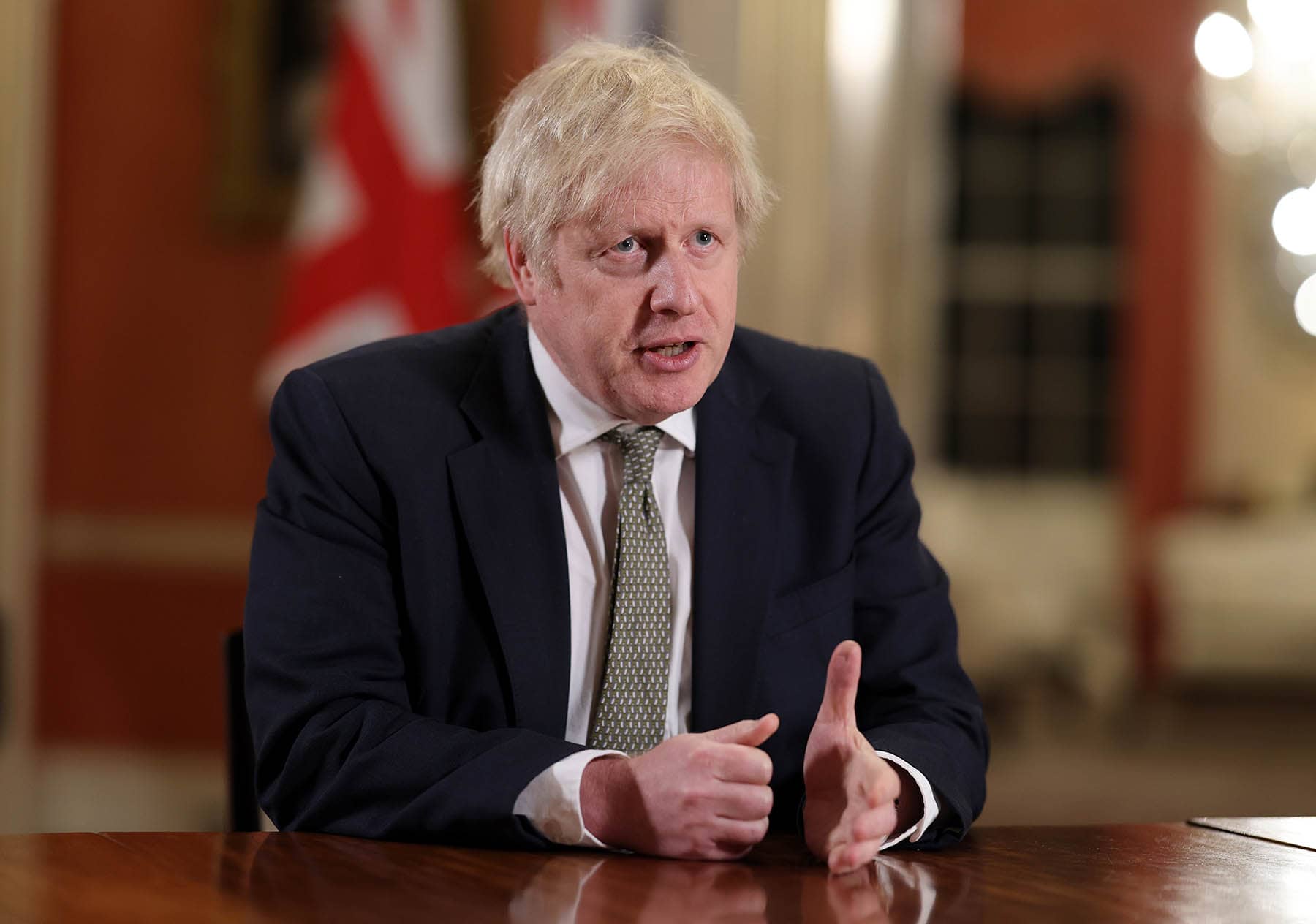 The British Pound endured a week start to 2021 as investor focus swiftly shifted from Brexit to the domestic UK economy which was burdened by the announcement of full lockdowns to contain the spread of the coronavirus in England, Scotland and Northern Ireland on Monday, January 04.

The impact to economic growth of shutting sizeable parts of the economy once more - including education - is expected to be negative, and the Bank of England is being tipped by some economists to cut interest rates as soon as the February 04 meeting of the Monetary Policy Committee in an attempt to provide additional support to the economy and financial system.

Interest rates at the Bank are set at a mere 0.10% and Sterling is expected by foreign exchange analysts to fall should market expectations for negative interest rates increase further.

The Pound-to-Euro exchange rate fell below 1.11 once more (EUR/GBP back above 0.90) as it became clear on Monday that the government was looking to tighten restrictions in England, with the pair now being quoted at 1.1060. The Pound-to-Dollar exchange rate had reached a new multi-month best ahead of the announcement at 1.3704, but soon retreated by over a hundred pips to quote at 1.3594 on Tuesday. 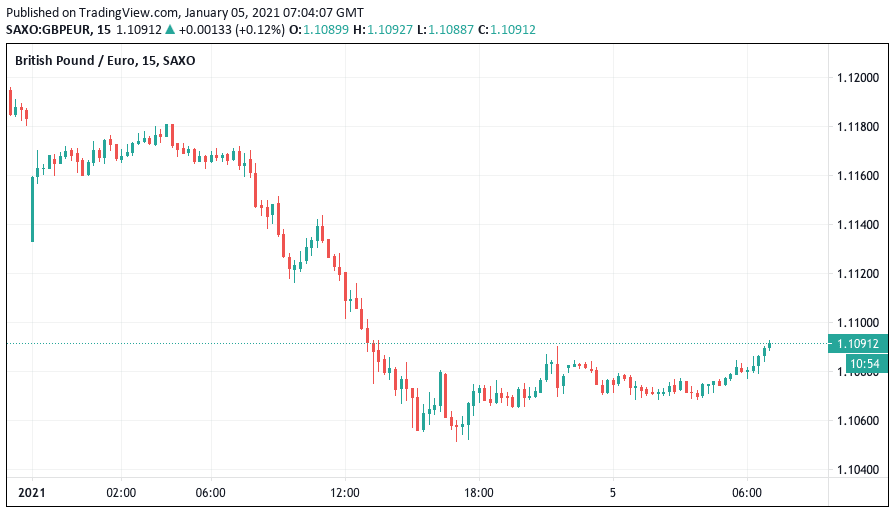 Above: A soft start to 2021 for Sterling against the Euro. For a money transfer rate just 60 pips away from the market, please find out more here.

The closure of schools knocked a significant amount of growth out of the economy in March, when the first lockdown closed educational settings.

"Some BoE MPC members were supportive of a rate cut in December and are certain to become more vocal if the economy is effectively mothballed through another hard lockdown. COVID and exit from the EU mean UK growth will disappoint so if incoming data does not trigger some profit taking in the Pound, the BoE may go down the vocal route of the ECB," says analyst Kenneth Broux at investment bank Société Générale.

The Bank of England has thus far resisted taking interest rates into negative territory, instead opting to wait for politicians to strike a post-Brexit trading deal and for the covid-19 pandemic to run its course while relying on quantitative easing to do most of the heavy lifting on the policy front.

The Bank said in 2020 that it expects to see the economy return to normal by Spring, but these assumptions could be tested by recent developments and market expectations for a cut to negative interest rates by the Bank at some point in 2021 have risen as a result.

The market is now expecting a 0.10% basis cut to have taken place by August.

"The resurgent pandemic and the subsequent economic restrictions are weighing on the pound. The record-breaking daily infections of Covid-19 in the UK has been met with stricter lockdown measures, hindering economic rebound hopes, and outweighing the relief over the UK-EU trade deal," says George Vessey, Currency Strategist at Western Union.

"The pound was already weakening yesterday on these rumours as GBP/USD brushed the $1.37 handle before falling over 1-½ cents though is currently toying with the $1.36 handle. GBP/EUR fell over 1.2% yesterday and remains below €1.11 this morning. Some investors were disappointed to realise the post-Brexit trade deal was largely priced into sterling’s value but hopes of further upside were brewing for 2021. Instead, Covid-19 is proving a strong headwind to sterling’s uplift and amidst rising risk aversion globally, sterling sentiment is souring," adds Vessey.

While the first Monetary Policy Committee meeting of 2021 is on February 04, markets might not have to wait until then to hear the Bank's thinking as the Bank of England Governor Andrew Bailey will appear in public this week.

"The near-term economic prospects are less rosy. Yesterday UK Prime Minister Boris Johnson said that tougher restrictions were likely, which could see the BOE consider the need for further easing. This will increase the attention on the BOE Governor Andrew Bailey’s comments at his scheduled appearance at the Treasury Select Committee hearing on Wednesday," says Clyde Wardle, Senior EM FX Strategist at HSBC.

Should the Bank be leaning towards an imminent interest rate cut, Bailey could well start to condition the market this week when he appears before the Committee.

If he does, the Pound could lose further valuation.

"The U.K. is a disaster, with cases of the new, more infectious variant driving a rapid acceleration in the Southeast, where it was first identified. The folly of allowing non-essential retail to remain open in London until December 20, even as cases soared, is now clearly visible in the case and hospitalisation numbers. More positively, the first doses of the AstraZeneca shot have been administered today," says Ian Shepherdson, Chief Economist at Pantheon Macroeconomics. 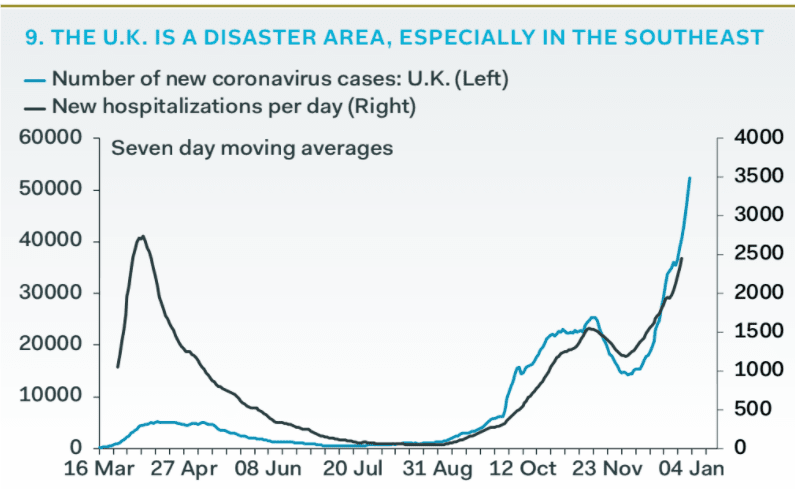 The UK is aiming to accelerate its vaccine rollout with the approval of the AstraZeneca vaccine candidate, which is cheaper than the Pfizer version and easier to store.

The Government has said it aims to hit a target of two million vaccinations a week in January, a pace that would far exceed the pace of rollout of the vaccine in the EU. If the UK is able to fully unlock before the EU as a result of a successful vaccine rollout, the Pound-Euro exchange rate could utimately find itself better supported.

Rolling out the vaccine is time critical, given the ability of SARS CoV 2 - the virus that causes Covid-19 - to mutate.

"The big new concern for scientists is the emergence of a new strain in South Africa, which appears to be even more infectious than the U.K. strain. Cases are soaring, and some vaccinologists are worried that the strain might not be preventable with current vaccines. Tweaks, however, take less time than initial vaccine development," says Shepherdson. 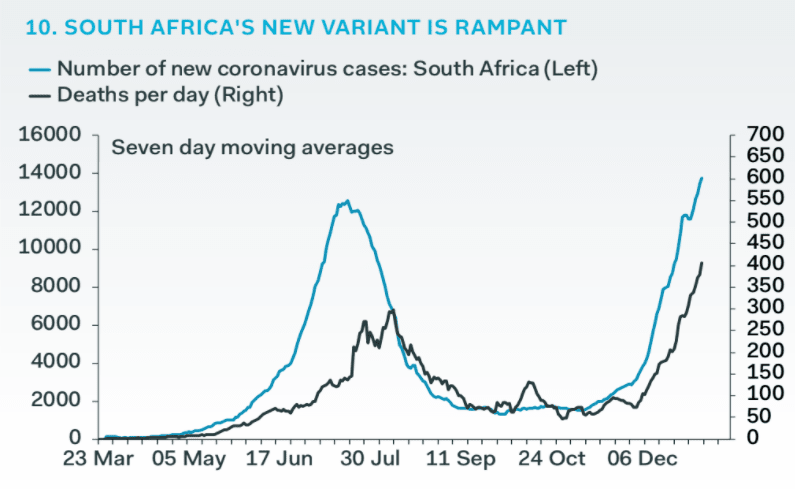 Johnson said in his statement to the country on Monday night that he expects to see the rollout of a vaccine accelerate markedly over coming days and if the Government's plan is executed then the most vulnerable could have received their first vaccines by mid February.

Should restrictions start to ease at this point the economy can find itself shifting into a more sustainable recovery, which could in turn help aid the British Pound higher provided the Bank of England opts to wait and look through the current restrictions at the economy's recovery potential.

In acknowledgement of the lockdown's impact to businesses, Chancellor of the Exchequer Rishi Sunak has announced some support for businesses, offering a one-off top-up grant for retail, hospitality and leisure businesses worth up to £9K per property.

A £594MN discretionary fund is also being made available to support other impacted businesses.

The one-off top-up grants are as follows:

For the many thousands of small UK businesses that don't have physical premises from which to collect grants, the lack of support will be of concern. The business loans issued during the first lockdown will be running low for many businesses and there is a risk that many are simply unable to make it into the middle of 2021, when revenues would likely start rising in the event that the government's 'vaccinate and unlock' scheme delivers an economic rebound.

"The maths is not great for this new offer of support from the Chancellor. The majority of the £4.6bn in support goes to the retail, hospitality and leisure sector across the country as an offer of up to £9,000 for each property. With the restriction due to last for at least six weeks that works out at £1,500 per week. Enough to cover the most immediate basics," says Dr Gordon Fletcher, retail expert from the University of Salford Business School.

"After 10 months of restrictions there is a real need to not just keep the lights on but to actively support businesses in these sectors to thoroughly 'pivot' and shift their business models. These sectors can become more robust to social-distancing and lockdowns restrictions but although the impetus to innovate may be present there is also a need for investment to support this change," he adds.