The British Pound keeps a positive tenor against the Dollar and Euro alive as markets maintain a cautious optimism that next week could see a final breakthrough in post-Brexit trade negotiations, although analysts remain divided as to how far Sterling can advance on an agreement.

Mid-week press reports suggest a trade deal is said to be "just days away" as Ireland and France are said to be moving towards the UK's position.

The Telegraph says Ireland believes "landing zones" for an agreement are now in sight while France is reported to have accepted that its fishing rights in UK waters will be reduced after the transition period ends on December 31, lowering one of the biggest hurdles in the path of a deal.

The newspaper reports, "the trade agreement could be announced as early as Monday, sources in Brussels suggested – but only if both sides made compromises on issues such as fishing and subsidy law."

The report corroborates an article out Tuesday in the Sun newspaper that said a deal could come as early as Tuesday, with UK Chief Negotiator David Frost being the source cited. According to the Sun, Frost has briefed Prime Minister Boris Johnson that a "possible landing zone" could be ready by Tuesday.

Pound Sterling was the second-best performing currency heading into the mid-week session on the headlines. "Speculation that David Frost has told Boris Johnson to prepare for a potential trade deal by next Tuesday has helped lift the pound higher despite ongoing uncertainty. The rise in the pound over recent months does highlight expectations of a breakthrough before the year-end deadline," says Joshua Mahony, Senior Market Analyst at IG.

The Pound's outperformance on the news meant it advanced against all but the Japanese Yen: 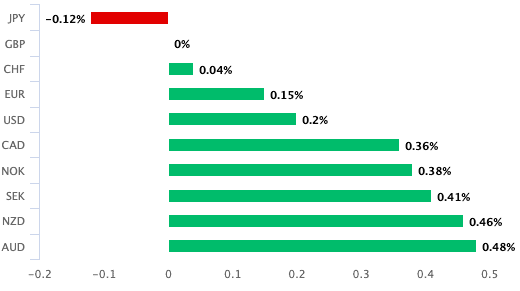 Above: GBP outperformed the majority of its peers on headlines suggesting a trade deal could be ready to sign next week.

While the unofficial headlines are supportive of Sterling in the near-term the official briefings from both the EU and UK remain decidedly ambiguous and laden with caution that a deal was by no means guaranteed.

Mahony makes a point on the Pound displaying a potential 'numbness' to a 'no deal' outcome, a view that has been echoed by various other analysts: "It seems we have got to a point where traders have become accustomed to a no-deal scenario, with even a thin deal likely to bring substantial upside for the pound."

The observation would suggest that the balance of risks for Sterling lie to the upside at this juncture, although most agree that there will be some notable downside in a knee-jerk reaction to the two sides failing in their endeavours.

"While there is little new news, barring an optimistic article in The Sun newspaper, investors appear to still be making the assumption that UK/EU Brexit negotiations will prove fruitful. But caution is still warranted," says Clyde Wardle, Senior EM FX Strategist at HSBC.

But the scope for gains in the event of a deal is another area of divergence amongst currency analysts, with some seeing notable upside and other seeing tepid gains at best.

"A comprehensive trade deal could potentially be the pound’s ticket significantly higher, a scenario that would reduce downside growth risks and lessen the likelihood of the Bank of England deploying negative interest rates," says Joe Manimbo, Senior Market Analyst at Western Union.

"A UK-EU trade deal now looks likely, which will certainly add to dollar selling versus the pound over the short-term, although further out pound gains are likely to reverse to some degree," says Derek Halpenny, Head of Research, Global Markets EMEA at MUFG.

Near-term price action in Pound Sterling is expected to be headline driven with the potential for sizeable volatility on unofficial briefings to journalists.

The experience of 2020, and indeed 2019 when the Withdrawal Agreement was being thrashed out, is that short-term volatility does not necessarily make for sizeable directional moves. Therefore, there could be a great deal of market excitement but very little conviction.

Thursday's video meeting of EU leaders was initially set as a deadline by both sides, but by all accounts it will not provide the moment of clarity markets have been yearning for.

"Sterling remains in wait-and-see mode as yet another unofficial deadline for the EU-UK trade deal is breached. Given that time for a deal is running out, we could see both parties rush into a deal as early as this week, which could have material implications for the pound," says Francesco Pesole, FX Strategist at ING Bank N.V.

"We also think there is room for further GBP spot appreciation and lower volatility as Brexit deadline nears. Although the timeline remains blurred regarding when a ‘skinny’ deal can be achieved before year-end," says Wen Yan, a foreign exchange strategist with Barclays.

Forecasts for the British Pound in 2021 from HSBC meanwhile reveal expectations for the currency to decline, even in the event of the UK and EU achieving a post-Brexit trade deal.

The view from the UK's largest bank flies in the face of consensus in the analyst community which says the Pound will rally against the likes of the U.S. Dollar and Euro over coming months, provided a deal is reached between the EU and UK before the year-end cut-off.

"We maintain a counter-consensus view on GBP, and expect the currency to weaken from current levels," says Dominic Bunning, Head of European FX Research at HSBC Bank plc. "We doubt that recent GBP resilience can last".

HSBC analysts tell clients there are two deteriorating dynamics specific to the UK that will make for a weaker Pound:

1) Trade frictions will rise: If a deal is agreed this year, the UK still faces greater costs of doing business with the EU, which is the country's largest trade and investment partner.

"Even with a Free Trade Agreement, increased costs in the form of “non-tariff barriers” will be sizable – by up to 14% based on UK Treasury analysis. A no-deal outcome would see even bigger barriers to doing business. GBP-USD does not appear to be factoring this in given it is trading close to its historic long-term fair value. In our view, the currency is the most likely channel through which an adjustment could be delivered to offset the impact of the greater costs," says Bunning.

2) The economic rebound from the covid crisis is faltering: The UK economy has been severely impacted by the coronavirus crisis, moreso than many of its global G10 peers.

"The UK saw the largest negative growth shock in Q2 amongst G10 economies and now faces a slower pace of recovery, in our view. Earlier upside economic surprises already look unsustainable and are rolling over as greater restrictions are imposed on activity. A lack of policy flexibility suggests diminishing government support compared to Q2 and Q3," says Bunning.