The British Pound fell sharply against the Euro, Dollar, Australian Dollar and other major currencies after the Bank of England said it was preparing to engage regulators on lowering interest rates to below 0% in coming months.

The revelation was contained in the minutes for the Bank of England's September policy meeting, released mid-day London time.

"The Committee had discussed its policy toolkit, and the effectiveness of negative policy rates in particular, in the August Monetary Policy Report, in light of the decline in global equilibrium interest rates over a number of years. Subsequently, the MPC had been briefed on the Bank of England’s plans to explore how a negative Bank Rate could be implemented effectively, should the outlook for inflation and output warrant it at some point during this period of low equilibrium rates. The Bank of England and the Prudential Regulation Authority will begin structured engagement on the operational considerations in 2020 Q4."

The impact on Sterling exchange rates was notable: 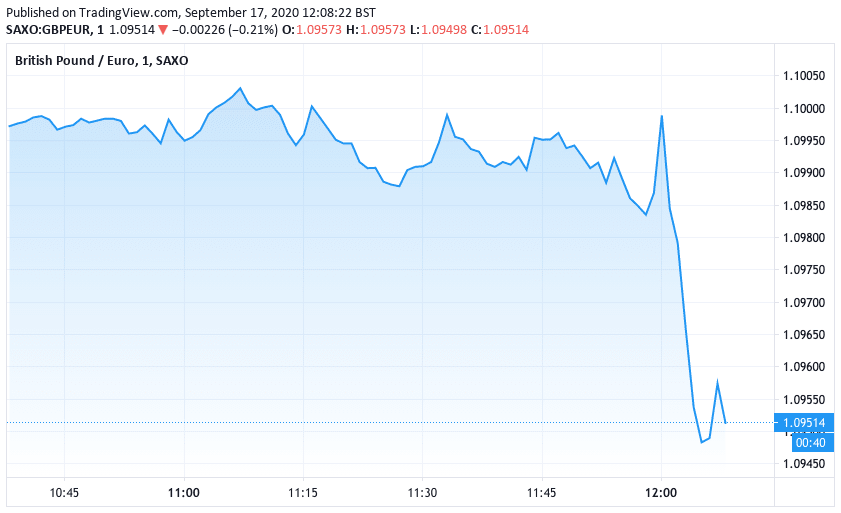 Above: GBP/EUR dips in wake of BoE statement

"Sterling has taken another knock on the news, compounding woes from the latest rash of Brexit developments. As always, the safest assumption seems to be that if trade talks collapse and the UK heads for a disruptive end to the transition period, further losses will materialise for the pound," says Ranko Berich, Head of Market Analysis at Monex Europe.

The Bank opted to leave interest rates unchanged at 0.1% at the September meeting, which is considered to be the lowest point rates can be cut to; beyond 0.1% it is anticipated that rate cuts give little benefits to the economy and could potentially destabilise the financial system.

However, given the massive economic shock suffered in 2020, combined with uncertainty over a future Brexit trade deal, the Bank feels it is worth examining the prospect of cutting interest rates to below zero.

The Bank has in fact been studying this possibility for some months now, but the admission that they will be engaging regulators in the final quarter of 2020 suggests further interest rate cuts are coming.

Remove the incentive of investing in UK government bonds and the Pound losses an important pillar of support, hence the losses today's news have triggered.

At its September policy meeting the Bank's Monetary Policy Committee (MPC) voted unanimously to keep interest rates unchanged at 0.1%, while also delivering an unanimous vote to continue with its existing programmes of quantitative easing programme to a total of £745BN.

The outcome of the policy meeting was on balance supportive of the status quo for yields and Sterling exchange rates, with the Bank noting, "high-frequency payments data suggest that consumption has continued to recover during the summer and is now at around its start-of-year level in aggregate, stronger than expected in the August Report."

For 2020 Q3 as a whole, economists at the Bank expect GDP to be around 7% below its 2019 Q4 level, less weak than had been expected in the August Report.

CPI inflation is expected to remain below 1% until early 2021, albeit slightly higher than expected at the time of the August Report.

The Bank noted recent domestic economic data have been a little stronger than the MPC expected at the time of the August Report, although, given the risks, it is unclear how informative they are about how the economy will perform further out.

Concerning the resurgence of covid-19 cases the Bank said the recent increases have the potential to weigh further on economic activity, albeit probably on a lesser scale than seen earlier in the year.

On balance the statement contains economic observations that would be typically supportive of the Pound, however this has of course been usurped by the suggestion contained in the minutes that negative interest rates are negative.

While it is apparent the market has judged the Bank to be preparing for negative interest rates, another issue to consider is the prospect of further quantitative easing which if increased further could also weigh on Sterling exchange rates in the future.

The Bank raised the total amount of bonds it would purchase as part of its quantitative easing programme by £100BN in June, taking the total package to £250BN.

However, this package will run out by year-end, at a time the economy could still be struggling, leading economists to say the package will soon be expanded.

"We think that the MPC will announce an extra £250BN of QE over the course of the next year, with an instalment of £100bn in November. That’s more than the consensus expects," says Andrew Wishart, UK Economist at Capital Economics. "By the time of the next meeting on 5th November the Bank’s current QE programme will be nearing its end, so it will be a good time to announce more stimulus. As the MPC is wary of the side-effects of negative interest rates on banks."

Capital Economics says they forecast UK interest rates to be "no higher" than 0.1% for the next five years.