One analyst we follow says month-end rebalancing amongst the world's multi-trillion dollar asset management industry could be a factor behind Sterling's gains.

"GBP was the best-performing G10 currency," says Marshall Gittler, Head of Investment Research at BDSwiss Group. "There were no clear fundamental drivers of the rally. Given the time of month, I suspect that it was due to rebalancing flows stemming from the underperformance of the UK equity market this month".

Gittler says the UK and Japan are the only major stock markets that fell in July, the underperformance of the UK stock market would mean that currency overlay managers’ allocations to GBP were below target and they would therefore have to buy GBP to increase the currency’s share of their portfolio.

Gittler's assessment would therefore suggest the gains in Sterling are largely technical in nature, casting doubts on whether they are sustainable on a multi-week basis. 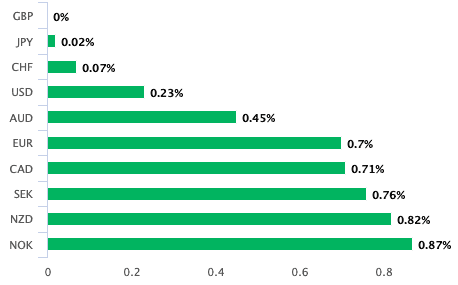 Nevertheless, it would be wrong to ignore a shift in sentiment for the better towards the British Pound and there are two notable themes we believe to be in play:

1) the UK economic recovery is picking up some pace and the country won't therefore necessarily lag its European neighbours, a scenario that had become a pretty popular assumption amongst analysts. It also certainly screens well against the U.S. where a resurgence in covid-19 cases has blunted the recovery.

2) the odds of a post-Brexit trade deal continue to inch higher, even if the official line is that the two sides are still far apart.

On the economic front, the CBI Distributive Trades survey confirmed a key element of the economy - the retail sector - has ultimately recovered from the covid-19 slump.

The CBI monthly retail sales balance rose to +4 from -37 in June, its highest since April 2019 and confirmation retail sales have now recovered to pre-Covid levels.

Sales are meanwhile expected by the CBI to remain close to seasonal norms next month.

The data confirms the UK economy is getting back on its feet and should quell fears that the UK was at risk of becoming an economic laggard to its Eurozone peers, a scenario that might have contributed to the Euro's recent rally against the Pound according to some analysts.

With July's PMIs outperforming those of the Eurozone, and with another set of robust data in the form of the CBI retail sales figures, the idea that the Eurozone is to outperform the UK in the recovery stakes is being questioned.

This should provide a much-needed pillar of support to Sterling going forward although the key consideration for Sterling will likely remain Brexit trade negotiations and global investor sentiment.

"Sterling has been somewhat caught in the middle between an appreciating euro and a depreciating dollar. As attention moves from the EU Recovery Fund possibly toward the ongoing Brexit talks we see potential for sterling to rally on positive sentiment around those discussions. We continue to expect progress in these talks to open the door for an agreement likely in autumn. We also expect the UK economy to continue to catch-up with the rest of Europe," says Gaétan Peroux, Strategist at UBS.

The Pound started the week strongly, with sentiment boosted on Monday courtesy of a press report that the EU's Chief Negotiator Michel Barnier told EU ambassadors that he is confident a post-Brexit trade deal will still be reached.

“I remain confident that a balanced and sustainable deal remains possible, even if less ambitious,” Barnier told the gathering, according to a Reuters report that quoted sources present at the meeting, adding that London seemed more interested in pursuing only a “low-quality, low-profile” deal.

The comments contrast to the official narrative presented by Barnier following the cessation of official negotiations in London on the previous Friday, where he stressed time was running out and that a 'no deal' was becoming increasingly likely unless the UK yielded further ground.

That Barnier is confident of a deal is quite notable, given that at the same point in the tenuous and tortuous Withdrawal Agreement negotiations such signs of optimism were rare indeed.

Looking at the timelines involved a deal would likely be reached by an October meeting of EU leaders, until then expect the official line to be that the two sides remain far apart, even if they are inching towards an agreement behind closed doors.

Should markets agree with this assessment, don't be surprised to see the Pound find further support. Indeed, Crédit Agricole's FAST FX model estimates that the Euro "is significantly overvalued" against the British Pound, by such an extent that it recommends selling EUR/GBP.