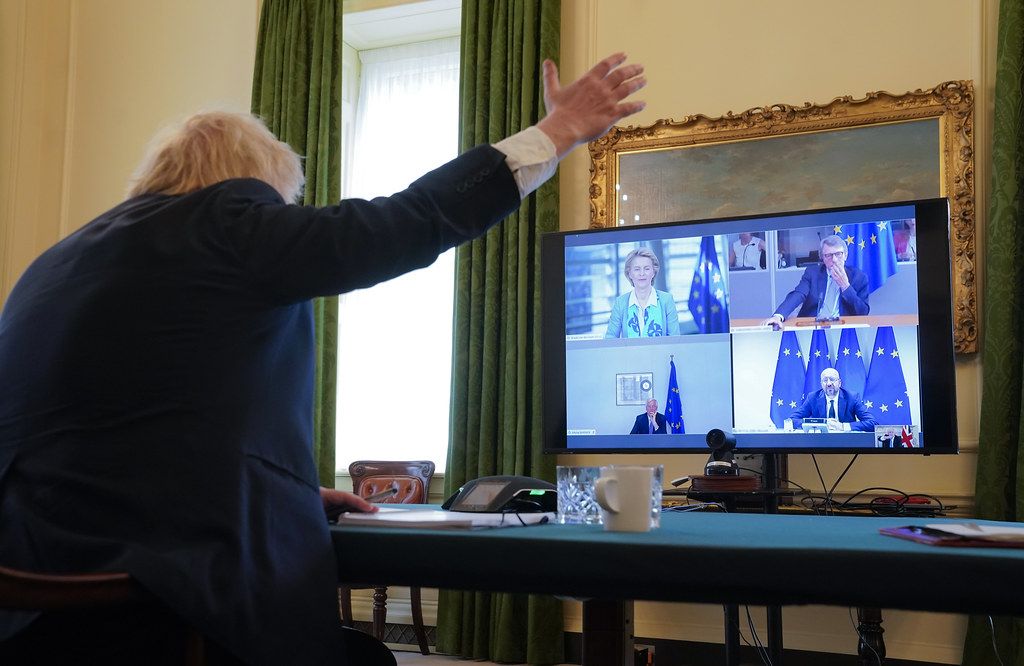 The British Pound has entered a short-term recovery phase over the course of the past 24 hours, thanks largely to a bounce in global stock markets in the wake of fresh U.S. Federal Reserve stimulus and reports of fresh momentum being injected into trade talks between the EU and UK.

The UK and EU took a step closer to securing a trade deal following a high level meeting between UK Prime Minister Johnson and senior EU officials, with Johnson saying the prospects for an accord are "very good."

Both sides acknowledged there would be no extension to the current transition period, while committing to a series of face-to-face intensive negotiation rounds in July.

Bloomberg reports people with "knowledge of the conversation" from both sides said the intervention has injected fresh momentum into the deadlocked negotiations.

The improved mood-music on trade negotiations appears to have been met with a sigh of relief by nervous markets: the Pound-to-Euro exchange rate has recovered some recently lost ground to go back to 1.1177, a gain of 0.30% on the day. 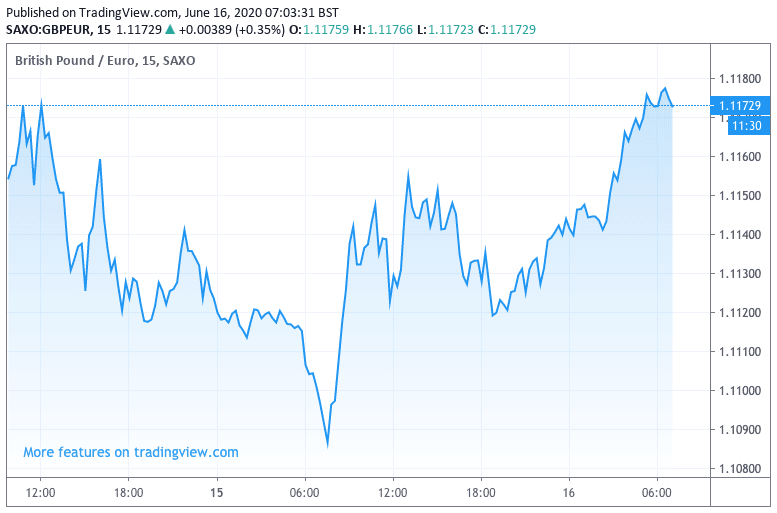 The Pound-to-Dollar exchange rate is up by 0.30% and is quoted at 1.2675. However, gains are being seen against the Australian Dollar, New Zealand Dollar as well as the Canadian Dollar suggesting there is some idiosyncratic movement underway in Sterling thanks to developments on the Brexit front.

An absolutely critical development is that the two sides also committed to "if possible, finding an early understanding on the principles underlying any agreement" - this means that an outline of a deal could be agreed before the details are agreed. This stance differs notably from the withdrawal negotiations which were done under the EU's mantra of "nothing is agreed until everything is agreed", which generated significant nerves for investors and was reflected in significant bouts of volatility in Pound exchange rates.

Johnson did however say he believes Brexit negotiations should be completed by end-July, saying that going beyond this point would be pointless. This suggests a new deadline has emerged in the Sterling calendar and we would expect nerves to rise into the run up of this hurdle.

"We see no reason why you shouldn't get that done in July," said Johnson, "I don't want to see it going on until the autumn, winter, as perhaps in Brussels they would like."

But the Bloomberg report adds that officials from Brussels and London are privately saying they are focusing on reaching an accord between mid-August and a summit of EU leaders scheduled for mid-October.

However, analysts remain nervous and warn that until there is a real breakthrough in talks the Pound's wings will be clipped.

"GBP is liable to become ever-more idiosyncratic as the UK nears the business end of the entire Brexit process, the last six months of the transition period, with still a trade deal to be negotiated. This puts GBP at the mercy of an unpredictable Brexit news flows, and investors should be prepared for potentially quite violent swings in GBP as the market tries to benchmark probabilities of the potential outcomes and eventually moves from valuing GBP on a probability-weighted basis to pricing a central scenario and then the eventual outcome itself," says Paul Meggyesi, Head of FX Research at JP Morgan.

Aiding gains in the Pound was a notable recovery in stock markets as investors set aside concerns that a second wave of covid-19 infections was about to swamp China and the U.S., but more significantly perhaps it was the actions of the U.S. Federal Reserve that aided confidence.

"Up to now, the requirements for participating companies made it seem like the purchases would be limited to companies that were in serious trouble – a backstop for the most desperate companies. But this plan appears to be more of a general support plan for the corporate bond market overall," says Marshall Gittler, Head of Investment Research at BDSwiss Group.

The move was seen as a timely boost for global investor confidence that was starting to swoon once more, confirming to investors that unlike in previous economic downturns there is a very active central bank that is willing to act aggressively to maintain the conditions for a recovery are in place.

U.S. stock markets overturned a soft start to the week to surge higher, pulling commodity prices and 'risk on' currencies higher, while 'safe haven' currencies such as the U.S. Dollar, Yen and Franc went lower.

This provided the conditions necessary for gains in the British Pound which tends to advance against the Dollar and Euro when markets are recovering, ensuring the losses sustained in the previous week and early on Monday were overturned.

However, it was not just the Federal Reserve that was underpinning the gains, as some market analysts had suggested the sell-off seen over the course of the previous week and early Monday was unlikely to last.

"Concerns about a second wave of COVID-19 have prompted a renewed sell-off in global equities. Our view is that this sell-off won’t last, and that most risky assets will make more headway this year, as economies continue to recover from their lockdown-induced slumps," says Simona Gambarini, an economist at Capital Economics.

The view is however conditional on outbreaks remaining localised, and renewed lockdowns not becoming widespread.

For now markets are confident the exit from lockdown is in place, which combined with ample support from the world's central banks should keep the recovery in place.

We would expect Sterling to remains supported if this backdrop remains in place as well as signs the EU and UK are committed to reaching a trade deal.