The British Pound has reversed some of its recent gains against the Euro and Dollar but is higher against the risk-on currencies such as the Australian Dollar and Swedish Krona as global stock markets and equities endure another day of selling pressure.

We have reflected in previous articles that this week's main focus for Sterling is global investor sentiment: when markets are in decline the Dollar, Yen, Euro and Franc tend to outperform Sterling. However, the Australian Dollar, Swedish Krona and Danish Krone all tend to decline against Sterling in such conditions as they are more prone to losses when markets and commodities are selling off.

A decline in stock markets and commodity prices follows the mid-week U.S. Federal Reserve policy event, that saw the world's de facto central bank maintain an undoubtedly negative tone. This prompted a sharp rally in global markets and Sterling as investors expressed relief that the Fed would maintain its incredibly supportive policy stance for the foreseeable future which would allow the sizeable recovery in stock markets to keep on running.

"The FOMC was unambiguously dovish, the dot plot showing all members forecasting rates flat at zero to end-2021 and only two looking for a hike in 2022. Powell reinforced this message at the press conference, saying the Fed is not even thinking about thinking about rate hikes," says Adam Cole, FX Strategist at RBC Capital Markets.

Yet, markets have since overturned their enthusiasm and are moving lower. "Subsequent to the FOMC, there has been little news and no clear catalyst for the risk-off moves overnight," says Cole.

In the wake of the Federal Reserve event and in sympathy with softer investor sentiment, the Pound-to-Dollar exchange rate is trading back down at 1.2666, while the Pound-to-Euro exchange rate has fallen back below 1.12 and is quoted at 1.1170. 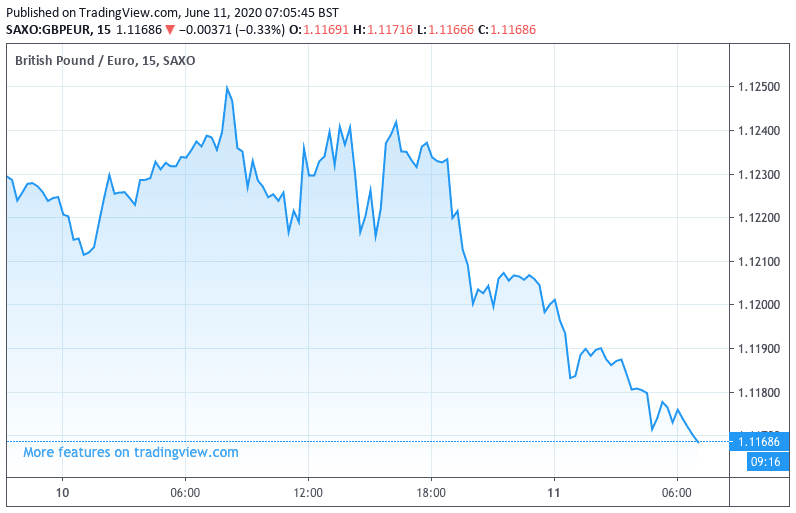 Above: GBP/EUR price movements over the course of the past 24 hours.

Strategists at French lender Crédit Agricole's investment banking division say the Pound's outlook against the U.S. Dollar could take a turn for the worse in the near-term due to a further deterioiration in investor sentiment. "With the social unrest in the US starting to abate, we expect a renewed escalation of US-China trade tensions in the coming days. This could weigh on risk appetite and the GBP while boosting the safe haven appeal of the USD," says Valentin Marinov, Head of G10 FX Strategy at Crédit Agricole.

But it is not just the global environment that has Crédit Agricole bearish on the Pound's outlook.

"The GBP remains very vulnerable and we expect the headwinds for the currency to intensify from here. In that, we expect 18 June to be a key date that could become a focal point for the GBP bearish sentiment," says Marinov in a client briefing out Wednesday.

We have noted that UK and EU negotiators last week effectively committed to negotiate right through until year-end in order to agree a trade deal, which had taken a great deal of pressure off Sterling as some in the market saw end-June as being a key deadline.

However, Marinov says pressures regarding Brexit trade negotiations have not completely evaporated and the currency should remain under pressure.

"The GBP remains very vulnerable and we expect the headwinds for the currency to intensify from here," says Marinov. "In that, we expect 18 June to be a key date that could become a focal point for the GBP bearish sentiment".

The date coincides with a 2-day meeting of EU leaders to consider progress on Brexit as well as a crucial Bank of England policy meeting.

"The BoE is expected to announce an extension of its QE programme and could discuss negative policy rates. On 18 June, the European heads of state will also discuss the lack of progress in the Brexit talks but seem unlikely to agree on an extension of the transition period," says Marinov.

The analyst says that while some of these negatives may already be reflected in current Sterling exchange rates, "the upcoming events could nevertheless hurt the currency, in our view. Indeed, we have argued recently that the selling pressure could resume in our view, especially if the BoE acts more decisively by expanding its QE programme more aggressively and the EU and the UK fail to agree on extending the transition period at the June EU summit."

Taking all the above into account, Crédit Agricole are forecasting a decline in the GBP/USD exchange rate back down to 1.20.