The move would put the Bank of England on the same path as the European Central Bank and the Swiss National Bank in pursuing sub-zero interest rates, while leading some foreign exchange analysts to suggest these growing expectations are in part responsible for the underperformance of the British Pound over the course of the past month.

By extension, this backs a popular view that a cut in the Bank rate from the current 0.1% to below 0% would be unhelpful for Sterling and contribute to further losses in the currency's value.

According to analysts at Lloyds Bank, the increase in talk of negative interest rates in the UK during May was reflected in bond markets as well as in Sterling exchange rates. Following suggestions that negative rates are a possibility from two BoE Monetary Policy Members, economists at Lloyds said the correlation between the GBP/USD and 2-year interest rate differentials rose sharply, from +0.04 to +0.56, thereby confirming a correlation between the currency and interest rate expectations. 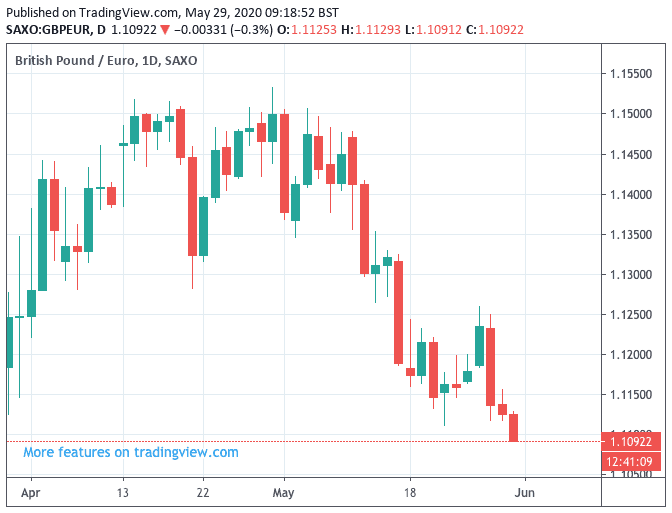 Above: A steady decline in Sterling (here, GBP/EUR) during May coincides with a increased talk of negative interest rates at the BoE

However, there are some analysts that say the impact of negative interest rates will actually be limited and could even lead to strength in the Pound, which makes for a significant intervention in the market's understanding of what further cuts at the Bank of England would actually mean for the Pound.

"Negative rates do not have a notably direct negative impact on FX," says Dominic Bunning, Senior FX Strategist at HSBC. "Currencies weaken in anticipation of negative rates but the negative impact wanes after delivery. This may be interesting for the likes of GBP and NZD right now, as markets anticipate central banks following this route. But it will be short-lived.

The Bank of England's Chief Economist Andy Haldane said on May 16 that further easing measures - including negative interest rates - could be introduced to alleviate the economic slump caused by the coronavirus pandemic.

"GBP is underperforming slightly after BoE Chief Economist Haldane said the BoE was considering a range of further easing options, including negative interest rates," said Adam Cole, Chief Currency Strategist at RBC Capital Markets in the wake of the developments.

On the question of negative interest rates Haldane said:

"The economy is weaker than a year ago and we are now at the effective lower bound, so in that sense it’s something we’ll need to look at – are looking at – with somewhat greater immediacy. How could we not be?" 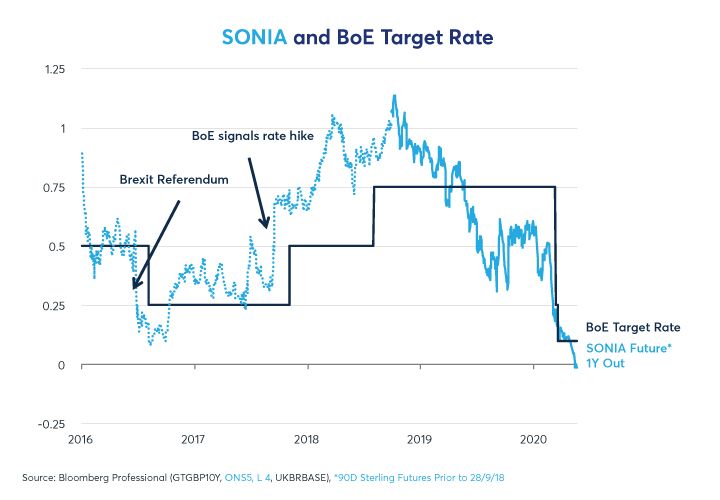 Above: SONIA futures price a possibility of negative rates in the UK. Image courtesy of CME Group.

The Bank of England's new Governor Andrew Bailey pressed home the message days later after he told UK lawmakers on May 20 that the Bank would consider cutting interest rates below zero; "we do not rule things out on principle".

He added the Monetary Policy Committee has a history of keeping under review the "lower bound", which is effectively the lowest level of interest rates they are prepared to cut interest rates to. The assumption is that 0.1% represents the lower bound for rates, but if economists at Threadneedle Street believe it is in fact lower, then the door to further cuts in rates opens.

Also laying the path to negative rates is the sharp fall in UK inflation, with the Consumer Prices Index (CPI) falling to +0.8% year-on-year in April 2020 according to the ONS, down from 1.5% in March and places it well below the Bank of England's target rate of 2.0%.

Central banks can only ever afford to boost the supply of money to the economy - via cutting interest rates and quantitative easing - if inflation is soft, and below target. Therefore, from a macroeconomic perspective, the conditions for lower interest rates are arguably in place.

But some economists warn that when interest rates are cut below zero the textbook expectations of their implications for the economy and exchange rates risk being turned on their head.

"If the BoE does go negative, it might have unexpected consequences for exchange rates. Of the four central banks which went to negative rates during the past decade, two of them quickly saw their currencies strengthen. The other two had more mixed results, yet were still consistent with the concept that negative rates do not work as intended," says Erik Norland, Executive Director and Senior Economist of CME Group.

Noraland explains that in theory negative interest rates are supposed to loosen monetary policy and support economic recovery, but they instead tend to "act as a tax on the banking system and may interfere with the process of credit creation. An inadvertent and undesired tightening of monetary policy that stems from negative rates may explain, in part, why currencies subject to negative deposit rates have tended to strengthen rather than weaken as is commonly the case when central banks ease monetary policy".

Above: HSBC graph showing a mixed reaction in FX to introduction of negative policy rates

The theory adds that investors will instead borrow at low interest rates and send that borrowed capital to where returns are higher, which actively pushes down the value of the currency being borrowed.

But HSBC economists say this is not necessarily the case when rates slip below zero.

"Negative policy rates do not cause deposit outflows. This should be the main transmission mechanism for weaker FX, but there is little evidence of it," says Bunning.

Furthermore, Bunning argues rate cuts below zero tend to be small and show that policy makers are running out of policy room. "With rates nearing terminal levels, FX has less room to respond".

CME Group's Norland says that as opposed to weakening the Pound, negative interest rates could instead cause the currency to rise in value.

"While its uncertain if the BoE will decide to push rates below zero, if the central bank were to pursue negative rates, it might strengthen the pound. A stronger currency could, in turn, slow the recovery from both the pandemic as well as making it more difficult to absorb any additional shocks from a possible no-deal Brexit," says Norland.

While speculation of more central banks going negative has understandably risen in the wake of the coronacrisis, it does appear that the Bank of England and Reserve Bank of New Zealand are already becoming more hesitant on taking the plunge as we move into June.

Noting that the UK economy might have already turned a corner during May, the Bank of England's Chief Economist Andy Haldane said this week that negative interest rates were by no means a given.

Haldane moved to cool speculation on the Bank's next moves by saying policymakers are "not remotely close" to cutting rates below zero, which marks something of a u-turn from his comment just two weeks earlier that "it's something we will need to look at".

Speaking during a 'Coronavirus Webinar' organised by the Confederation of British Industry, Haldane said policymakers are reviewing the potential impact of negative rates on banks and lenders, which could see a squeeze on margins, and on the broader economy.

"To be clear, reviewing and doing are different things and currently we are in the review phase and have not reached a view remotely yet on the doing," said Haldane.

Based on the research and evidence that suggests negative interest rates do not in fact lead to sustained currency weakness, and that the Bank looks to be getting cold feet on the idea, we would expect the market to shift its gaze elsewhere. We expect foreign exchange to become increasingly reactive to Brexit trade negotiation headlines, of which June will have many.