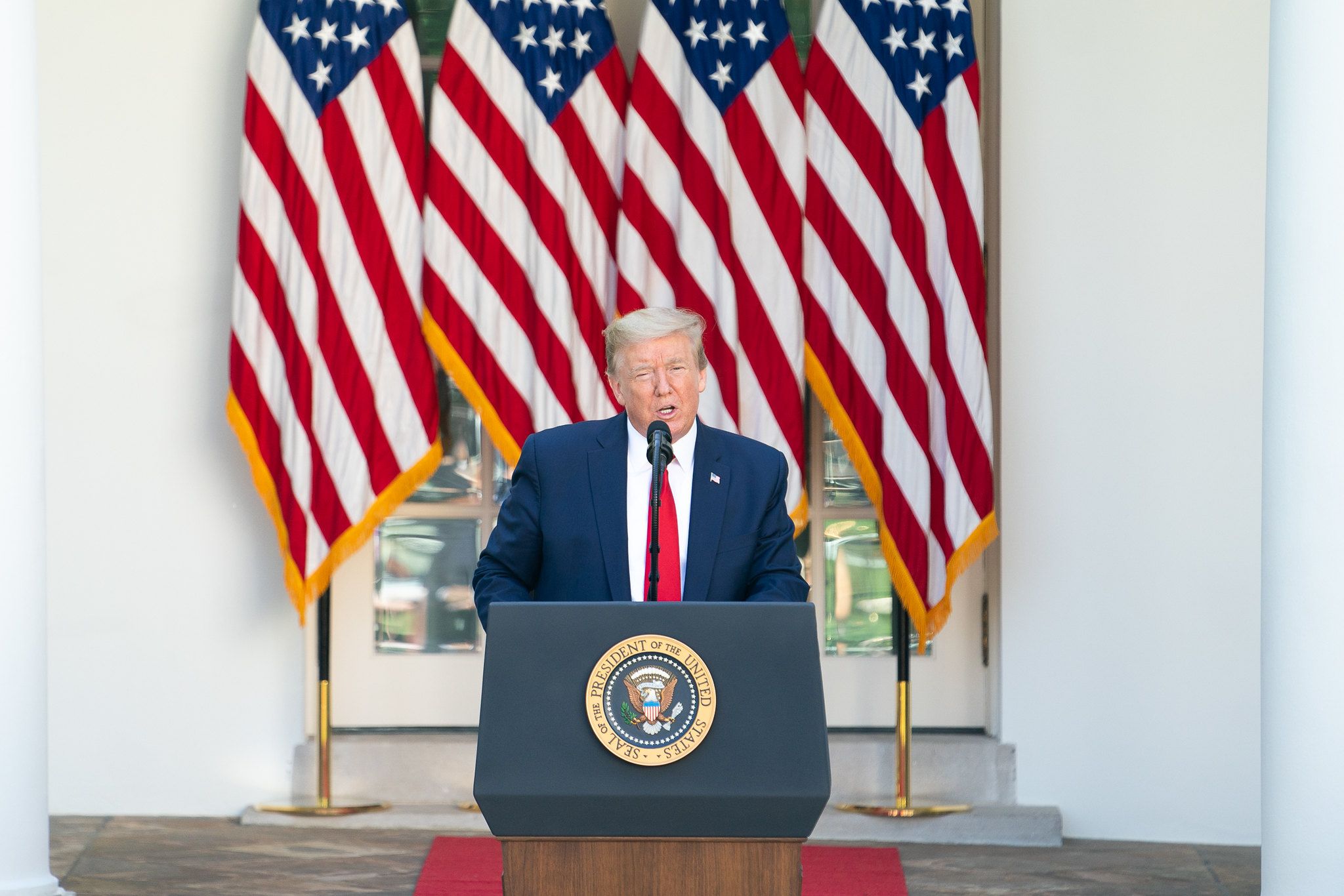 The British Pound fell against the majority of the world's major currencies over the course of the past 24 hours and maintains a defensive tone ahead of the weekend, amidst a deterioration in global market sentiment and growing anxiety ahead of a Friday update on the EU and UK's latest round of post-Brexit trade negotiatons.

The Pound is currently down 1.33% against the Euro and down 1.60% against the Dollar this week, thanks to a combination of factors: 1) global market sentiment 2) Bank of England policy and 3) Brexit trade negotiations; all of which are proving unsupportive at present:

1) Global stock markets have fallen this week, with the S&P 500 - our favoured benchmark for global investor sentiment - down 2.70% since Monday. A good portion of the declines come courtesy of signs that the U.S. administration of Donald Trump is raising tensions with China over their initial handling of the covid-19 crisis.

Market sentiment deteriorated after Trump said in an interview Thursday the U.S. could cut off its "whole relationship with China". The report adds the administration is mulling avenues to possibly punish China, or seek financial compensation for what it sees as withholding information about the virus.

"U.S.-China tensions are now ‘a thing’ for markets to live with and ignore - like a virus I can think of. Yet there are more than enough sabres being rattled for a worrying rise in the risk of someone accidentally cutting themselves, or someone else. Prudence would suggest a cautious approach. In the real world I keep hearing that “just in time” has now switched to “just in case” for businesses," says Michael Every, Global Strategist at Rabobank. 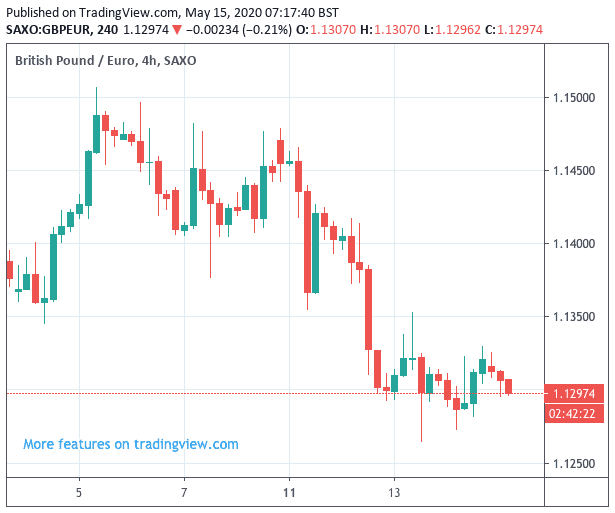 How Sterling ends the week will depend largely on how the Friday session evolves. Stock markets are cautiously higher at the time of writing, with bulls tending to buy up and dips in the market and we therefore look for some potential rebound to shape up which could ultimately prove supportive to Sterling.

However, we would expect the extent of any bounce back to be limited in the current environment.

"Global markets are on the slide once again, with traders once again selling risk-assets as fears over another potential crash in stocks comes into view. The lack of market direction over the past month has been a reflection of the uncertainty that has dominated for traders, with initial optimism over impending moves to ease lockdown measures gradually souring. The ability to ignore the huge deterioration in the economic picture can only last for so long, with the reasoning behind such actions likely to come crashing down in the event that the prospect of a meaningful economic bounceback cannot occur," says Joshua Mahony, Senior Market Analyst at IG.

2) Sterling's focus is however expected to rest with the outcome of the latest round of Brexit trade negotiations, details of which are likely to be announced later on Friday afternoon.

Of interest will be the messaging from the EU's chief negotiator Michel Barnier. Barnier showed an uncharacteristic sense of frustration when he addressed the media at the conclusion of the previous round of negotiations on April 24, confirming that the two sides remain separated by a gulf that looks increasingly difficult to bridge.

Our reading is that the UK is becoming increasingly unwilling to yield to the EU's demands, particularly given the gravity of the coronavirus economic crisis which will ultimately dwarf any economic hit posed by Brexit providing the UK with the cover to pursue a more robust negotiating position. "The UK is already in for its worst recession since 1709 - really! - would it even notice the extra blow from Hard Brexit? One can make a case both ways," says Michael Every, Global Strategist at Rabobank.

The UK and EU have until June 30 to agree to a new extension to the transition period, if required. However, the UK are steadfast in a view that no extension will be required, which could in turn place pressure on Brussels to give ground.

These are negotiations and markets know they will only yield results at the last minute. Nevertheless, the uncertainty - when combined with a softer global market environment - is likely to limit Sterling's upside potential and encourage potential weakness.

"This year Sterling has had the tendency to weaken versus dollar and euro when investor sentiment deteriorates (which we expect). Taking all of these factors together, we expect Sterling to weaken," adds Boele.

3) The British Pound's outlook will likely remain pressured for as long as the Bank of England pursues a policy of printing ever-larger quantities of money in order to prop up the UK economy, ensuring it is now one of the most agressive of the world's major central banks when it comes to quantitative easing.

Market expectations are for the Bank to announce a further £200BN package of quantitative easing at its June meeting, which is designed to keep the yield paid on government debt as low as possible. This week saw the yield on the government's two-year bonds fall into negative territory for the first time, confirmation of the significant demand being created by the Bank of England.

A side-effect of falling yields is however a decline in demand for the debt from international investors, which in turns limits demand for the Pound.

"At a minimum, we expect a GBP100bn increase in the asset purchases target at the June MPC meeting, with a risk that it follows the Fed in adopting unlimited asset purchases, and potentially in future involving caps on government bond yields to anchor markets (similar to the Bank of Japan’s yield curve control policy)," says ABN Amro economist Bill Diviney.

Markets have over recent days raised expectations that the Bank of England will maintain an aggressive and outsized presence in the UK's sovereign bond markets, buying up government-issued debt in order to ensure the yield paid by the government on that debt to investors does not shoot higher.

With the government requiring billions more to spend in order to fight off the economic effects of the coronacrisis, the Bank of England will likely increasingly find itself as the buyer of last resort in the bond market, ensuring yields remain contained.

While the Bank's actions will provide support for the UK financial system and economy, the side effect is that negative yields tend to correlate with a decline in currency value. Particularly when the currency belongs to a small, open economy, as is the case with Sterling.

Consensus expectations are that the Bank of England will announce another increase in its asset purchase program by up to £200BN at its June meeting.

On Tuesday the Bank's Deputy Governor for Monetary Policy Ben Broadbent said the Bank stands ready to deploy whatever tools necessary to keep the market and economy functioning. The Pound fell on the day, with some analysts suggesting not only would the Bank consider further expanding its quantitative easing programme but it might even consider slashing interest rates into negative territory.

"This certainly plays into our view that significant central bank purchases of vast net gilt issuance levels by a UK Treasury with a “twin deficit” problem that doesn’t have the luxury of a reserve currency typically leads to currency weakness," says Shahab Jalinoos a strategist at Credit Suisse.

Credit Suisse tell clients in a recently released research note that they believe the Pound to be one of the must vulnerable of the world's major currencies for the foreseeable future, courtesy of a combination of Bank of England policy, domestic covid-19 lockdown policy and growing anxiety over Brexit negotiations.

They maintain a 'short' position on Sterling as a result.