Pound Sterling is proving a difficult subject to cover, with the sheer intra-day volatility it is currently experiencing leaving us with more questions than answeres.

Those regular readers of Pound Sterling Live would immediately point out that this is not the way it should be: the playbook goes that when markets are down, the Pound is down and vice versa.

So here we are witnessing a rally in Sterling as markets go down, which would apparently break the convention that Sterling remains highly aligned to the ups and downs of investor sentiment.

But, as the adage goes, a swallow does not a summer make, and we would therefore say it is too soon to suggest the Pound has broken with its traditional coronavirus crisis.

Judging how month-end will work out for any given currency is fraught with difficulty but there is certainly a fair amount of chatter out there to suggest perhaps these flows are impacting on Sterling.

Regardless, for those looking to buy foreign currency using Sterling the recovery in the UK's currency will be welcome as they regain some purchasing power.

"We continue to see upside potential for Sterling. Despite its relative liquidity, the pound was one of the G10 currencies most harshly punished by the dollar funding squeeze, possibly due to the UK’s large financial sector. As this issue seems to have been resolved, we expect sterling to regain its lost ground by mid-year," says Gaétan Peroux, Strategist at UBS. 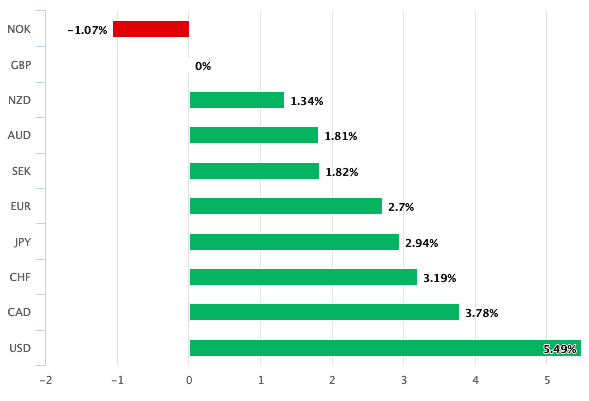 Gains in Sterling have been quite remarkable, the Pound-to-Dollar exchange rate now quoted at 1.2284, it had been as low as 1.1450 earlier in the week.

"Sterling’s rally of around 4% had GBPUSD on pace for its best week since 2009. Demand for the dollar evaporated as U.S. stocks were poised for their best week since the 1930s, a clear sign of improved investor confidence. The Pound also appeared markedly oversold after sinking this month to 35-year lows," says Joe Manimbo, foreign exchange analyst at Western Union. 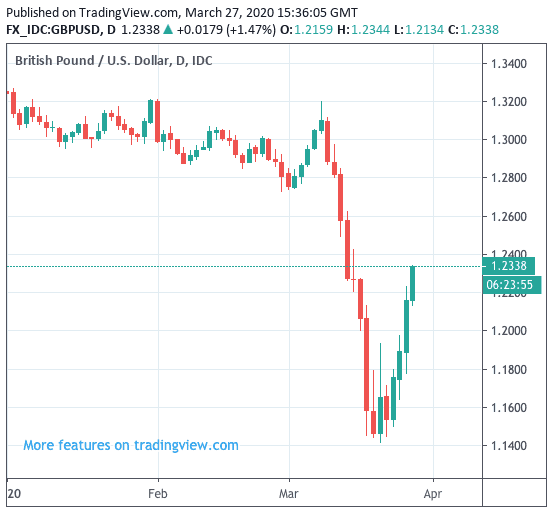 The Pound is also making hay against the Euro, the Pound-to-Euro exchange rate is quoted at 1.1155 at the time of writing, having been as low as 1.0652 earlier in the week.

"An important question for GBP, is whether investors view the UK fundamental backdrop as sufficiently attractive for it to claim back lost ground vs. the EUR," says Jane Foley, Senior FX Strategist at Rabobank. "There is little doubt that the UK, like many other major economies is now facing recession. While the Pound is set to remain vulnerable on any further waves of panic selling in the markets in the coming weeks, how it behaves through to the end of the year is likely to depend on how successful the UK’s economic responses are judged to be."

The UK's Chancellor on Thursday announced further fiscal assistance measures when a slew of support packages for the self employed were announced.

The latest initiative takes the government's support package of direct tax and spending measures to £119bn (5.3% of GDP), according to analysis from Capital Economics.

"This unparalleled policy response won't prevent a precipitous drop in economic activity in Q2. And the big risk now is that many more people are made unemployed, many more businesses fail, and firms and households become more reluctant to spend even once the virus is under control," says Ruth Gregory, Capital Economics’ Senior UK Economist.

1/ I’m proud of what we’ve done so far, but I know that many self-employed people are deeply anxious about the support available for them.

So to support those who work for themselves, today I am announcing a new Self-Employed Income Support Scheme. pic.twitter.com/wJQZzNFOCH

Also key to the Pound's outlook is how the entire coronavirus saga impacts on the outcome of trade negotiations between the EU and UK, an issue that has understandably fallen dramatically down the priority ladder.

Foley says any extension of the Brexit transition phase is likely to be welcomed by investors insofar this would be seen as avoided further blockades at borders into next year.

Currently, Rabobank expect the GBP/EUR exchange rate to be trading in the 1.1628 area at the end of the year.

However, Stephen Gallo, European Strategist at BMO Capital says the coronavirus crisis makes the prospect of the UK leaving the EU on WTO terms a more likely prospect, which would most likely be an outcome that would weigh on Sterling.

"This issue is wide open to debate, but all things considered - including the unprecedented impact of COVID-19 on the global economy - we believe the prospect of a WTO exit from the transition by the end of 2020 has increased," says Gallo.

Gallo says growing expectations for a WTO exit could be one of the fundamental reasons contributing to the recent weakness witnessed in Pound Sterling over recent weeks.

"The trade-off is simply this: in light of COVID-19, is the cost of moving to WTO trading terms with the European Union high enough that it would justify extending the transition period and getting bogged down in negotiations concerning the EU’s Level Playing Field demands, EU rules on state aid, European Court of Justice jurisdiction, non-regression on existing EU laws and reciprocal access to fishing waters?"

"We are leaning towards “no'."

Gallo says that with all the other moving parts the UK government has to deal with it will not want to expend energy on potentially tortuous Brexit negotiations that would last into 2021.

Instead, the UK government might opt to take advantage of all the available levers at its disposal to recover from the coronavirus crisis, and this leverage might be found in a WTO exit from EU rules.

"Put simply, on the other side of COVID-19, both the UK and Brussels will be in a state of repair. In the UK, the appetite to deal with Brexit negotiations could be very low, and Brussels will probably be even less inclined to cede ground to the UK’s demands in the negotiations than it was befor," says Gallo.