The British Pound has traded in erratic fashion at the start of the new week, courtesy of volatile global stock markets amidst ongoing investor uncertainty and the resultant unpredictable flows of international investor capital.

The UK currency started its weekly account by registering strong advances of over half a percent against the Dollar while it was also seen higher against the Euro and other majors amidst a sharp drop in global stock markets. Stock markets have however since recovered some ground through the course of the European trading session thanks to developments involving the U.S. Federal Reserve, and this has corresponded with the Pound shedding some of its earlier gains.

This is unusual behaviour as we have previously seen Sterling decline in tandem with markets, only to recover alongside any improvements. Monday's price action appears to flip this equation on its head and simply reinforces to us how difficult it is to call the currency in the present climate.

Driving a recovery in global markets was an announcement by the U.S. Federal Reserve of a massive expansion of its quantitative easing programme that will see it buy $75BN of Treasuries every day this week.

In short, the world's central bank has announced an unlimited quantitative easing programme that it hopes will underpin the global financial system and lessen the damage of the coronavirus to the U.S. and global economies.

The Fed also announced a number of other programmes, including a new lending facility for U.S. businesses named the Main Street Business Lending Program, intended to support lending to eligible small-and-medium sized businesses, complementing efforts by the SBA.

Others initiatives include the Term Asset-Backed Loan Facility implemented during the financial crisis; there will be a program worth $300BN “supporting the flow of credit” to employers consumers and businesses and two facilities set up to provide credit to large employers.

Markets reacted positively to the moves, cutting all of the losses in stock market futures that had once been “limit down” in overnight trading. Dow futures most recently pointed to a more than 400-point move higher at the open.

Global stock markets nevertheless remain fragile as countries continue to implement strict measures to fight the coronavirus pandemic which will ultimately hit economic growth. An added source of some of the uncertainty currently gripping markets lies with a failure by the U.S. congress to agree an economic rescue package to support the economy.

"News that U.S. Senate Republicans and Democrats couldn't agree on a massive stimulus bill sent S&P futures tumbling 5.0% to hit limit-down early Monday in Asia. Reports indicate that both sides are continuing to talk, but confidence a deal can be agreed to before Wall Street opens Monday has been shaken," says John Noonan, Regional Director for Forex Watch in Asia at Thomson Reuters.

Erratic moves by Sterling also comes as the market delivers its judgement on a set of fiscal support measures announced by the UK government last Friday, which should minimise the negative economic impact of the coronavirus outbreak but will come at a significant cost.

The market's cost / benefit judgement of the package - which includes a commitment by government to pay companies 80% of staff wages up to £2500 - will likely determine how Sterling trades in the short term.

"In a normal recession the downturn builds gradually. The most exposed companies offering luxuries or discretionary items suffer larger falls in turnover than those producing the basics of everyday life, but they retain substantial business. In this crisis, however, many businesses in these affected areas will simply have to close, losing all their turnover overnight. They are large employers of labour, so there will be substantial job losses, unless governments step in to pay employment subsidies to businesses to keep staff on without customers," says John Redwood, MP and Chief Global Strategist at Charles Stanley.

While the Pound is seeing some improvement it is still highly vulnerable to restarting its decline against the Euro and Dollar and we would look for signs of stabilisation to take place over coming days if we are to begin considering the formation of a base and we remain wary that unstable global markets and the ever-shifting coronavirus outbreak could deliver further declines. 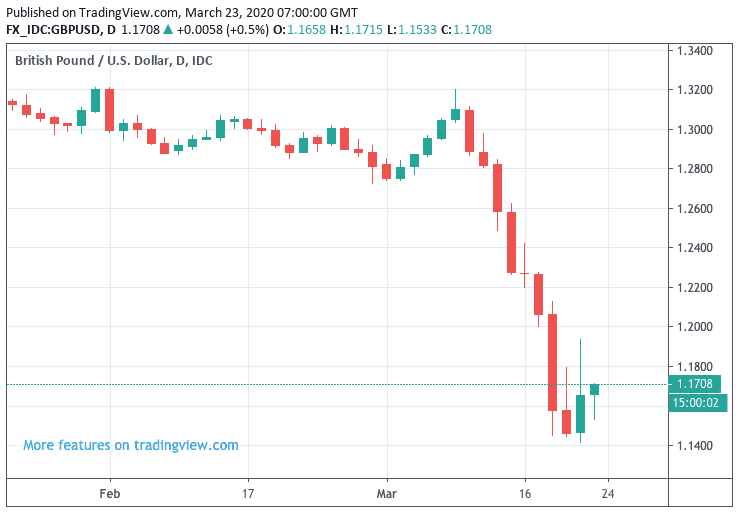 The cost of the UK government's support package will be substantial with initial analysis suggesting it could come in at about 6% of UK GDP. This could provide a huge debt burden on the government in coming years and negatively impact the UK's credit worthiness which will in turn have a potentially negative impact on Sterling.

However, the market might also judge that the UK is leading its peers in dealing with the economic crisis and will therefore be best placed when the crisis does come to an end.

The government's support scheme is intended to help business "pay people and keep them in work," said Chancellor Rishi Sunak. The measures come as the government steps up its attempts to suppress the spread of coronavirus by forcing the closure of restaurants, pubs, clubs, cafés and leisure centres which will place significant strains on this sizeable sector of the UK economy.

The Pound-to-Euro rate rallied into the weekend and the charts suggest a continued corrective rebound over the coming days.

Sterling rallied on Friday following a plethora of central bank actions to stabilise global markets although it suffered heavy losses previously that led it to set a new 35-year low against the Dollar and a fresh post-crisis low against the Euro.

Price action took Sterling down to 1.0525 against the Euro, continuing a long run of punishing losses that left Sterling nursing a -7.9% decline for 2020.

Concerning the technical outlook, Karen Jones, head of technical analysis for currencies, commodities and bonds at Commerzbank, says the Euro's rally against Sterling could be at risk of fading.

Her studies of the EUR/GBP charts show, "the presence of a 13 count – these are warning signs for the up move."

"We would allow for some near term consolidation/corrective set back. Dips lower should find some support offered by 0.9147 the September 2019 high and the 0.9022 October high. Currently the Elliott wave count on the daily chart is suggesting that we allow for a corrective set back to 0.8850," says Jones.

Looking at the market from a GBP/EUR perspective, Jones' studies suggest recent improvements could lift the Pound-to-Euro rate back to 1.12 over the coming days.

However she ultimately expects the recovery to peter out there and for the trend to remain against the British currency, ultimately leading it into a further fall back to the 2008 low of 1.0200 in the next three weeks. 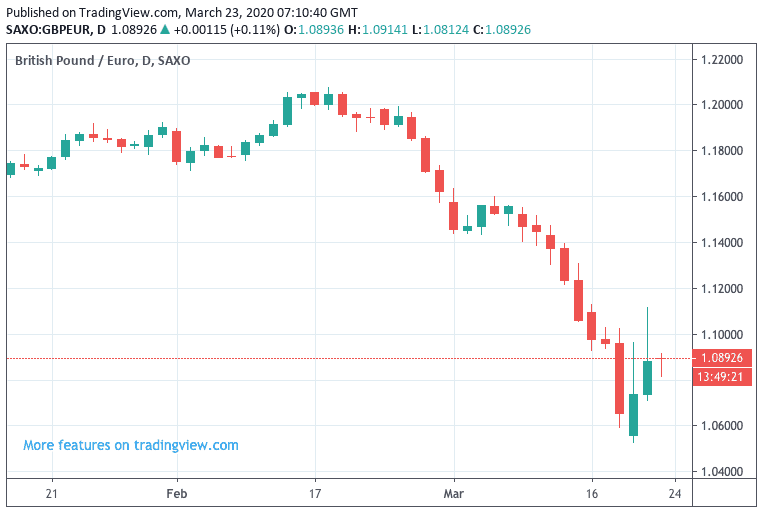 The Pound-to-Dollar rate closed out its worst week since the financial crisis on Friday as financial markets continued to haemorrhage capital, although the charts are still tipping the exchange rate lower while few, if any fundamental analysts, see the Dollar weakening any time soon,

Pound Sterling briefly traded at its lowest level against the Dollar since 1985 last week as investors dumped risk assets and even jettisoned typically safe-haven government bonds of many major economies from their portfolios.

Investors bought Dollars with the proceeds of other asset sales although they didn't appear to buy much else and the greenback's resulting gains have been so large the Federal Reserve (Fed) is now pushing back against it.

Jones says "rallies will make no impact on the chart" so long as the Pound-to-Dollar rate remains below the 1.2194 level and that Sterling ideally needs to recover as far as 1.2682 in order to alleviate downward pressure on the charts. Jones's studies show the Pound-to-Dollar rate could fall to 1.0463 within the next three weeks and tips it to remain near that level over the next three months.