- Sterling up across the board

- Markets row back on expectations for Jan. 30 rate cut at Bank of England

Pound Sterling was seen trading higher against the Euro, Dollar and a host of other major currencies on Tuesday, Jan. 21 after the release of official labour market figures that showed both a jump in employment and wages in December.

The strong numbers come in defiance of a recent run of soft economic statistics, and will give policy makers at the Bank of England reason to keep interest rates unchanged and cast into doubt growing market expectations for a January 30 interest rate cut.

The ONS reports employment in the UK expanded by 208K in the three months to December, well above the 110K expected by the market. The claimant count in December did see an addition of 14.9K out-of-work benefit claimants, but this was well below the more pessimistic 22.6K the market was expecting. The UK employment rate was estimated at a record high of 76.3%, 0.6 percentage points higher than a year earlier and 0.5 percentage points up on the previous quarter.

The UK economic inactivity rate in the populationwas estimated at a record low of 20.6%, 0.4 percentage points lower than the previous year and the previous quarter.

But for the Bank of England, and for Sterling in extension, it is the wage numbers that are likely to have been of more significance.

Based on the employment statistics out today, it would be hard to argue that this is an economy that requires an interest rate cut. Members of the Bank of England's Monetary Policy Committee have signalled through a series of speeches in January that a rate cut might be warranted in the first half of 2020 based on the observation the economy is slowing. An interest rate cut would, in theory, boost the economy as the cost of borrowing money falls. A side effect of such a cut is however often a softening in the currency.

January has seen expectations for a rate cut shoot above 70%, and the Pound has fallen in sympathy with this trajectory in interest rate expectations. The question now becomes is whether or not an economy with record high employment levels and rising real wages is actually in need of a supportive rate cut?

The implied probability of a 25bps interest rate cut on January 30 fell to 64%, from a little over 70% last week. Should market expectations for such an outcome be pared back further, it stands that the Pound will recover more lost ground. 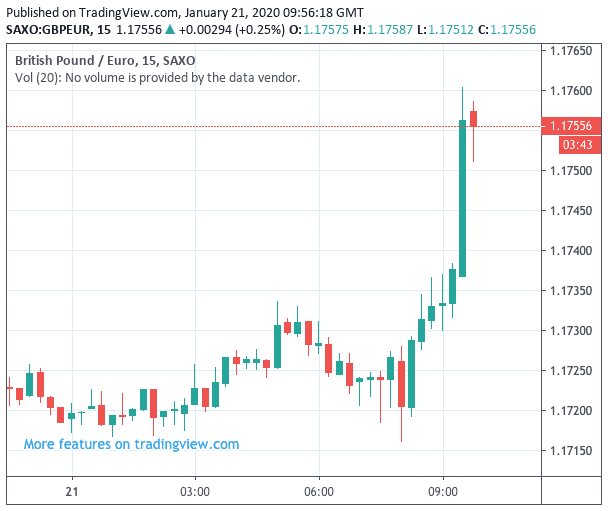 Above: Sterling went sharply higher against the Euro on the release of employment data for December.

"The larger-than-expected rise in employment in November suggests that the labour market is not getting any worse and may have even started to turn around. That could help to convince the Monetary Policy Committee to hold off cutting interest rates at the end of the month," says Thomas Pugh, UK Economist at Capital Economics. "It is worth noting that the MPC has said that it is giving more weight than normal to the condition of the labour market to help it determine how much slack there is in the economy. As such, the rebound in employment and slightly softer pay growth will give the MPC another reason not to cut rates from 0.75% to 0.50% at their next meeting on 30th January."

Samuel Tombs, Chief U.K. Economist at Pantheon Macroeconomics says the employment numbers are strong enough to make the doves at the Bank of England - who would be willing to cut rates to provide support for the economy - pause for thought.

"The continued resilience of the labour market increases the chances that the MPC will take a rain-check next week, instead of cutting Bank Rate immediately. Encouragingly, the huge 208K increase in employment was driven by a 135K rise in employee numbers, which was the biggest rise since the three months to February 2019. Businesses clearly are not gearing up for a downturn," says Tombs. 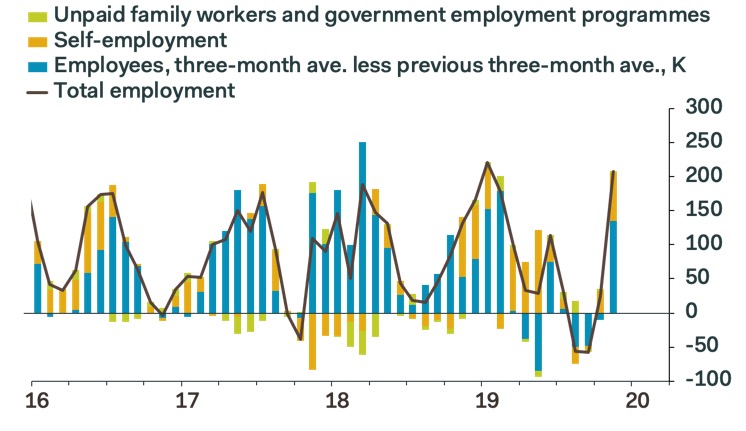 Foreign exchange strategist Jordan Rochester with Nomura says Sterling is likely to remain supported, even were the Bank of England to look through the current employment statistics and cut interest rates at the end of the month.

"Risk reward is not in favour of chasing GBP lower into a rate cut: With the BOE rate cut priced with a 66% chance, the risk reward is that they delay their decision until later this year to evaluate how the data and fiscal stimulus plays out," says Rochester. "GBP/USD would naturally head higher as a result. It’s a strong view of ours that if the BOE do cut rates as our Economists team expect, that would likely represent the low in GBP."

For the Bank of England however, it is likely the release of PMI data out on January 24 that will prove to be the deciding factor, as the release will give the first real snapshot of the evolution of the UK economy since the December General Election. The data should give an insight into whether or not there has been a meaningful pickup in investment as businesses and individuals react to the certainty that the Conservative's majority should deliver.

"We think that the crucial piece of information for the MPC will be the flash PMIs on 24th January, which will confirm, or refute, any “Boris bounce” in the economy," says Pugh.

Pantheon Macroeconomics says the rebound in the flash composite PMI in January, due on Friday, will be strong enough to dissuade the Committee from easing next week.