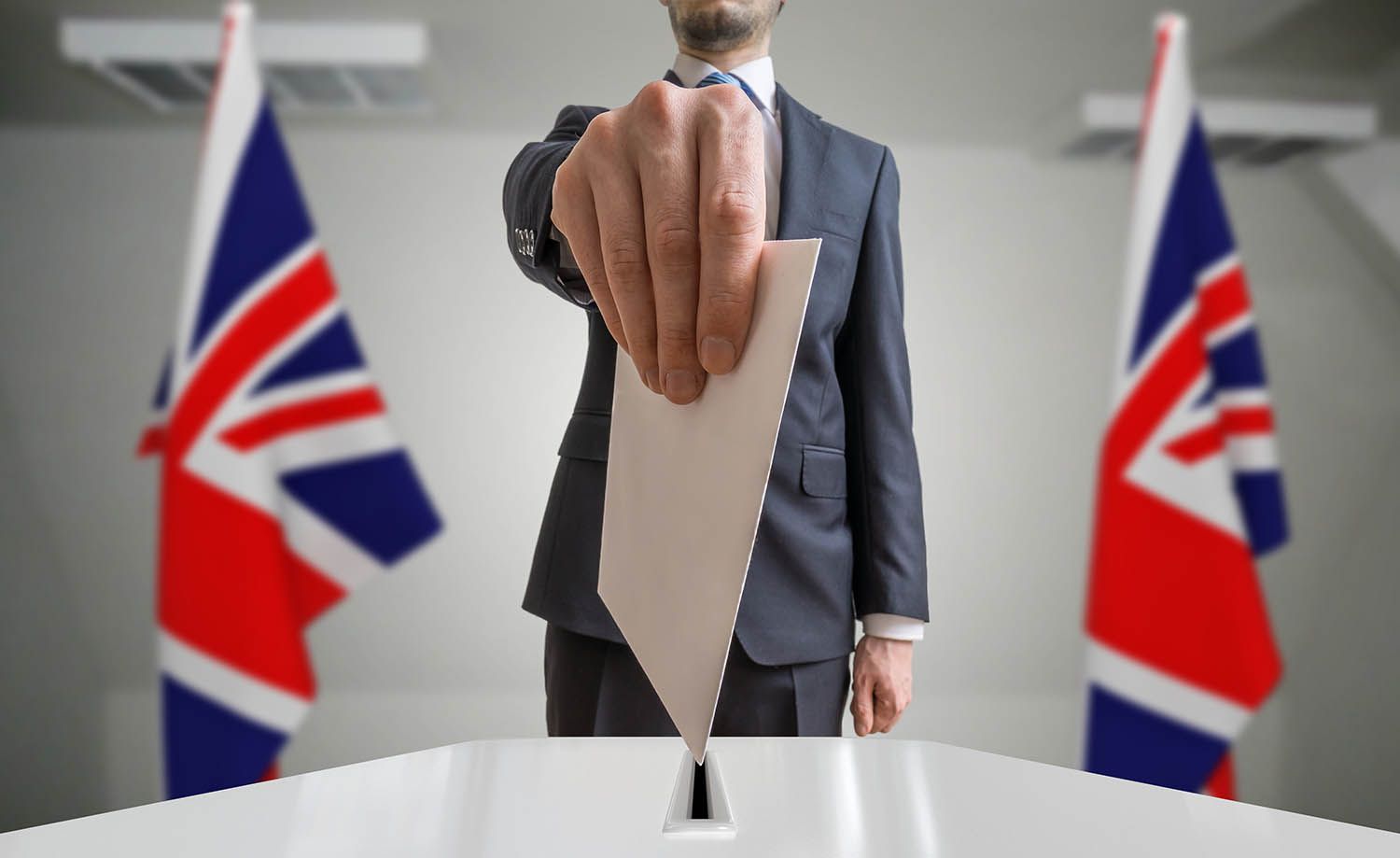 The British Pound was put on the back foot on Tuesday, November 26 after another poll suggested the gap between the Conservatives and the Labour Party was in the process of narrowing ahead of the crucial December 12 election.

Labour's manifesto pledges last week to increase both spending and taxes, nationalise various industries and give cash giveaways to pensioners has gained traction and is now being reflected in the polls.

This suggests the market is highly attuned to any tightening in the polls, and this confirms the balance of risks remain skewed to the downside over coming days as evidence suggests the gap between Labour and the Conservatives will continue to tighten owing to Labour's steady improvement in the polls.

"The Pound is on a back foot today, with the election pollsters pointing towards a tightening gap between the Conservative and Labour parties just over two weeks before the general election," says Joshua Mahony, Senior Market Analyst at IG. "Conservative gains had been a key driver of Sterling upside, yet that appears to be flagging as we reach the business end of the election process." 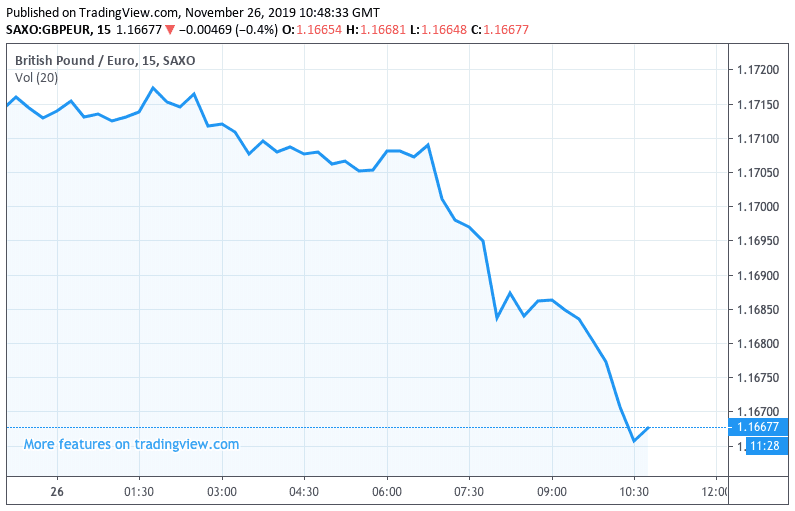 A regional poll from YouGov out Monday meanwhile showed a surge of 9% for Labour in Wales since early November.

"It is hard to disagree that a Conservative majority is the most likely outcome of the election, but with markets priced for this with a high degree of confidence, the hurdle is low for GBP slipping back to the bottom of its recent range," says Adam Cole, a foreign exchange strategist with RBC Capital Markets.

Analysts are warning the market might have been guilty of overconfidence in their expectations for a Conservative majority, and therefore Sterling's recent rally could be at risk if the polls confirm a turn in favour of Labour ahead of December 12.

The Pound rallied above 1.17 against the Euro, and 1.29 against the U.S. Dollar on Monday, "as markets gain confidence that we could see a Conservative majority in the critical Brexit-focused election. With the polls pointing towards continued improvements in Tory support, it seems likely we will see Johnson’s Brexit deal pushed through," said Joshua Mahony, an analyst with IG in London, in comments on Sterling's strong start to the new week.

Adam Cole, a foreign exchange strategist with RBC Capital Markets, has highlighted a positive correlation between bouts of Sterling appreciation and the rise in the implied odds of a Conservative majority on the Betfair Exchange, where the implied probability of such an outcome reached a record at 70% on Monday. The correlation between the odds on the Betfair Exchange and the Pound-Euro exchange rate is particularly tight.

We would therefore need to see the implied odds of a Conservative majority keep rising in order for Sterling to maintain its upward trajectory.

But, with the implied probability already at 70%, we find the balance of risks are growing for those odds to come down as the campaign enters its final two weeks and undecided voters come off the fence and push those odds down.

Pollsters at YouGov noted that in 2017 many of the undecideds were in fact Labour supporters, who ultimately 'went home' and voted Labour. This phenomenon saw Labour achieve a greater share of the vote than the polls implied. 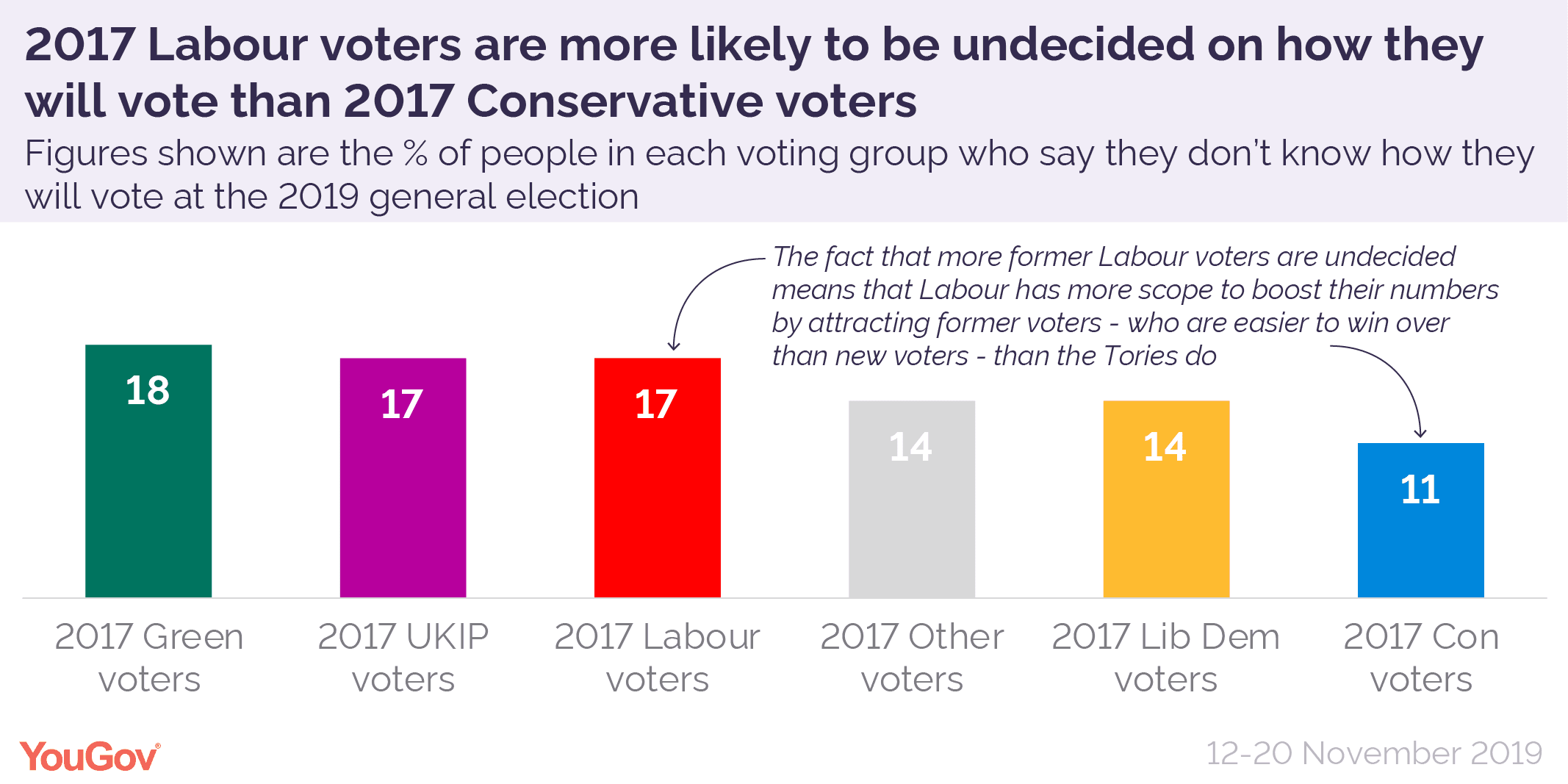 YouGov analysis suggests the Conservatives have already drawn as much support away from the Brexit Party as is likely, and that the lion's share of undecideds are in fact former Labour voters. History could be about to repeat.

"With the Conservatives having depleted much of the Brexit party vote, it seems as if their ascent could be stifled from here on. Conversely, the gains seen in a Welsh poll highlight the potential gains for Labour, with the possible impact of tactical voting pointing towards significant areas where Labour currently trail the Lib Dems or SNP," says Mahony.

For those looking for a stronger Pound, the risk is that the Conservative's poll margin over Labour could be at risk of slipping over coming days and weeks.

Samuel Tombs, UK Economist at Pantheon Macroeconomics says that since 1945, the final opinion polls have incorrectly predicted the Tory-Labour vote gap by 4% on average, and by as much as 9% (1992).

"Right now, with a 13% lead, a Conservative majority is likely," says Tombs. "But if the lead goes <10%, it would only take a typical polling error in Labour's favour for a hung parliament." 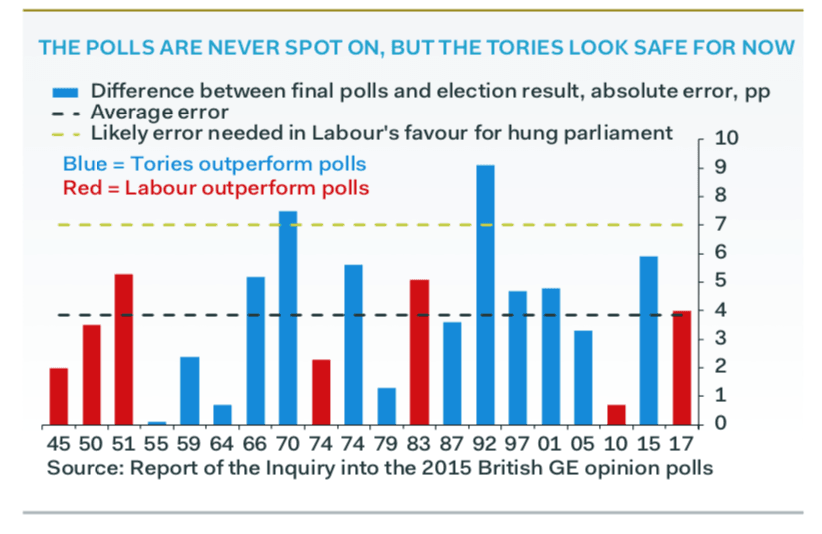 Foreign exchange analysts see a hung parliament as being an outcome that would initially be negative for Sterling in that it will deliver no clear path forward on Brexit. Businesses and financial markets are seeking clarity on Brexit, and if Parliament is unable to decide on a route forward then 2020 could be characterised by stagnation.

RBC Capital's Adam Cole says the below chart should prompt caution for those expecting a Conservative majority: 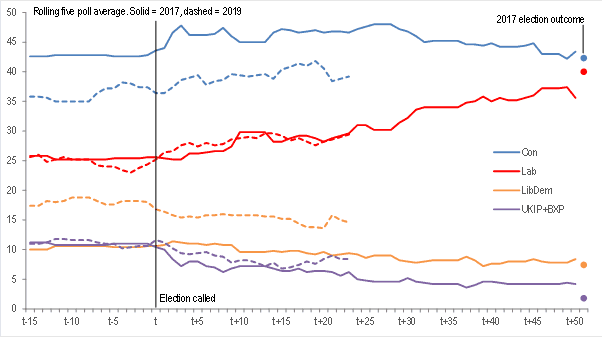 "A glance at the chart above cautions against over-confidence. The chart shows voting intentions polls into the run up to the 2017 election overlaid on those for the current campaign, with “t” marking the day the election was called. Labour’s standing is almost exactly where it was at this point in the 2017 campaign and the trend through the campaign so far is also similar (up around 3%)," says Cole.

The chart also shows that an increased share for the smaller parties leaves Conservative voting intentions materially below where they were at this point in 2017.

Cole says there is a widespread expectation that history will not repeat in 2019, but "the polls in the coming days need to be watched closely."

Wednesday night sees YouGov release their MRP polling model which gives a highly accurate breakdown on polling data to give an indication as to how the seat distribution might look on December 12.

The MRP in 2017 proved to be notably accurate in calling the final result.

"For markets, the prospect of a Corbyn government is viewed as an overwhelmingly negative outcome given his anti-business stance. However, with Johnson persisting with his commitment to a 2020 break from the transition period, we are also seeing some worries creep in that even a Tory majority could ultimately bring a hard or no-deal Brexit," says Mahony.