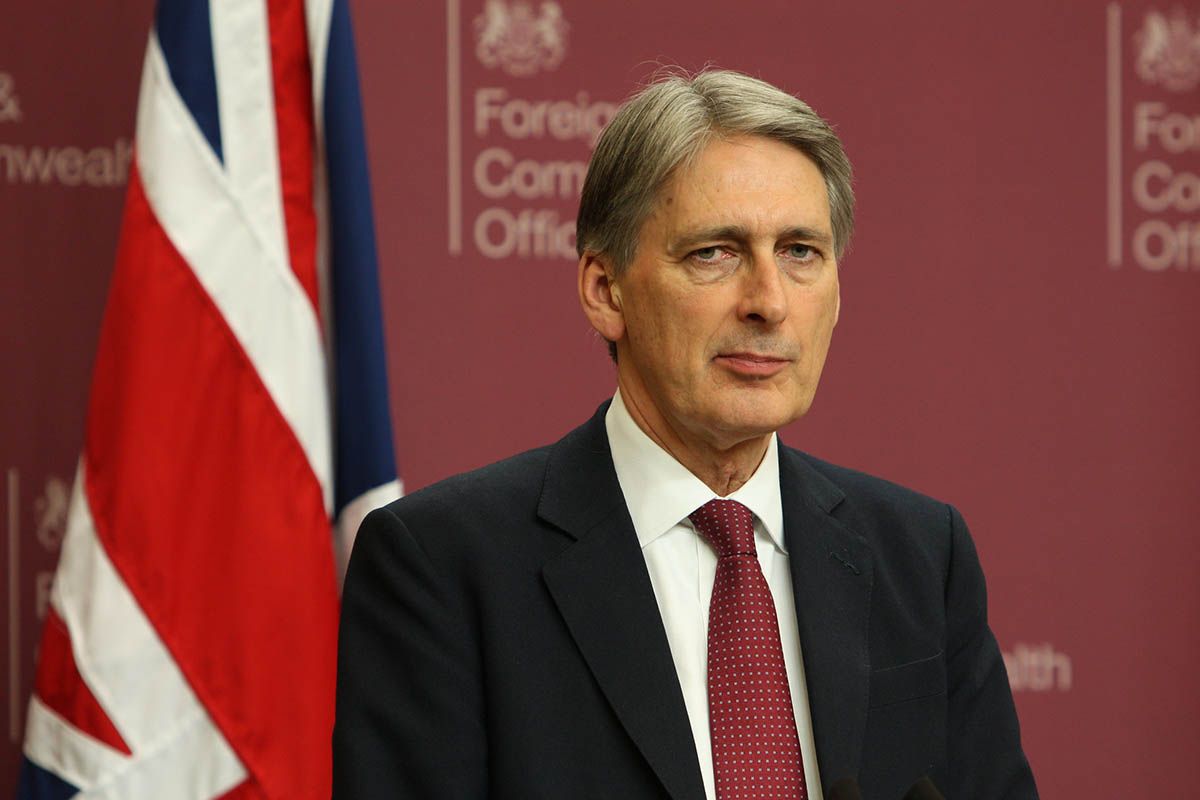 - Sterling trades down to 6-month lows

- Talk of rift between May and Hammond raises political instability

Chancellor of the Exchequer Philip Hammond is reportedly "prepared to resign" over Prime Minister Theresa May's legacy spending plans, according to news reports that are credited with triggering the latest impulse lower in Pound Sterling.

According to the Press Association, senior government sources say tensions between officials at the Treasury and Prime Minister's office have reached boiling point over May's spending intentions.

If true, yet another dose of uncertainty will have been lobbed into the already fragile political landscape in the UK.

Sterling tends to depreciate at times of rising uncertainty.

"How low GBP/EUR can go in the short-term is a question of how bad can the political landscape in the UK get. Hammond's threat of resignation pushed the cross below the €1.12 barrier for the first time in five months with much of the Tory leadership race left to be run," says Simon Harvey, an analyst with Monex Europe.

May’s intention to spend up to £9BN each year on education over three years, including plans to build new schools and pay teachers higher wages, have sparked tension, report the Press Association.

The Pound has been under pressure since early-May, ensuring a technical trend of weakness remains entrenched in key Sterling pairs. "Studies of the charts suggest the exchange rate is set to continue its downtrend in the days ahead," says Joaquin Monfort, Pound Sterling Live's technical editor in his week-ahead forecast on GBP/EUR. "The 4-hour chart - which we use to ascertain the short-term trend - shows the pair plateauing after a fairly steep downtrend. Yet given the old adage that the trend is your friend, it is eventually expected to renew its downtrend."

The forecasts made ahead of the week appear to be playing out as expected. 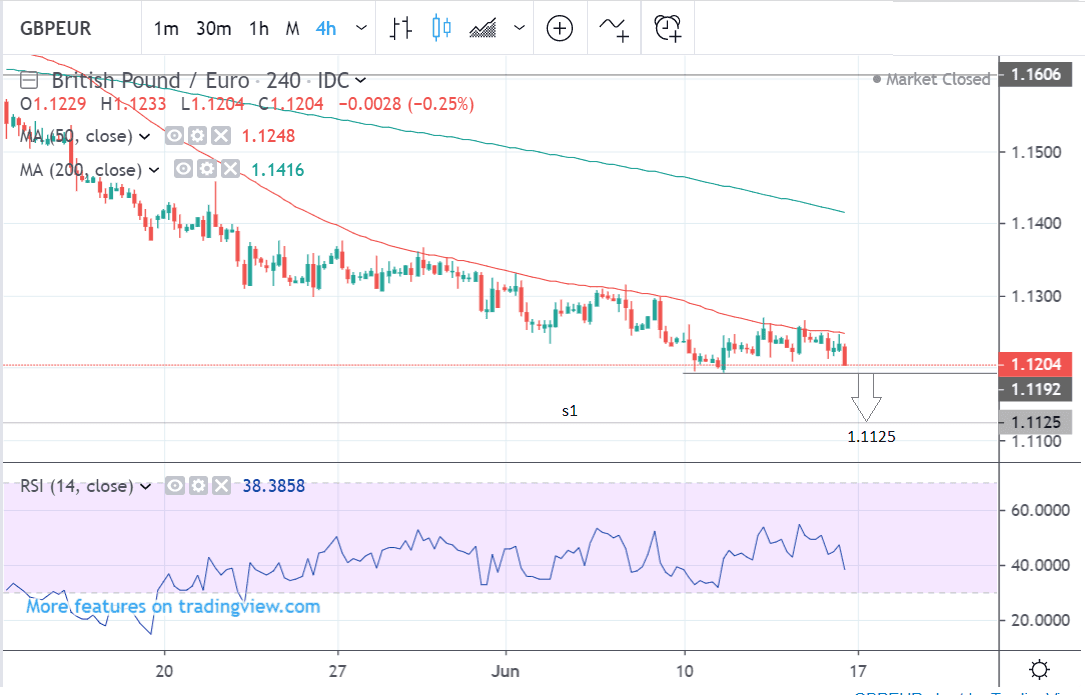 Looking at the GBP/USD exchange rate, Karen Jones, a technical analyst with Commerzbank, says "GBP/USD has eroded the 2019 uptrend at 1.2570 and looks set for further losses to the 1.2444 December 2018 low. The market now stays directly offered below the 7th June high at 1.2763." 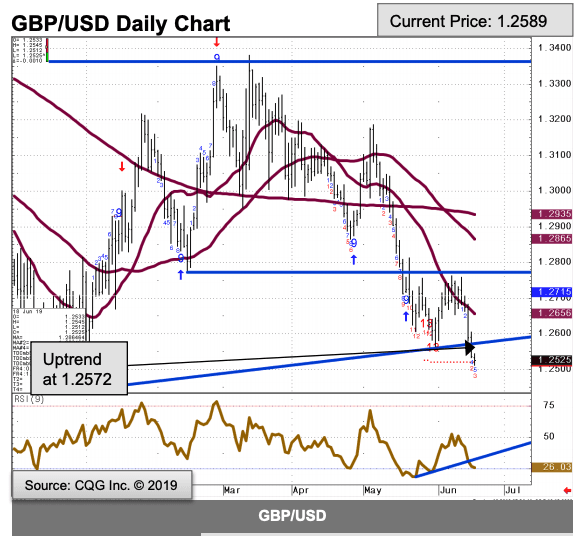 We believe the ascent of Boris Johnson to the top job is already largely captured in the price of Sterling, and the details he reveals about his intended Brexit policy going forward is where market interest will lie.

Therefore, Tuesday night's debate between Johnson and other contenders could be interesting for currency markets in this regard. 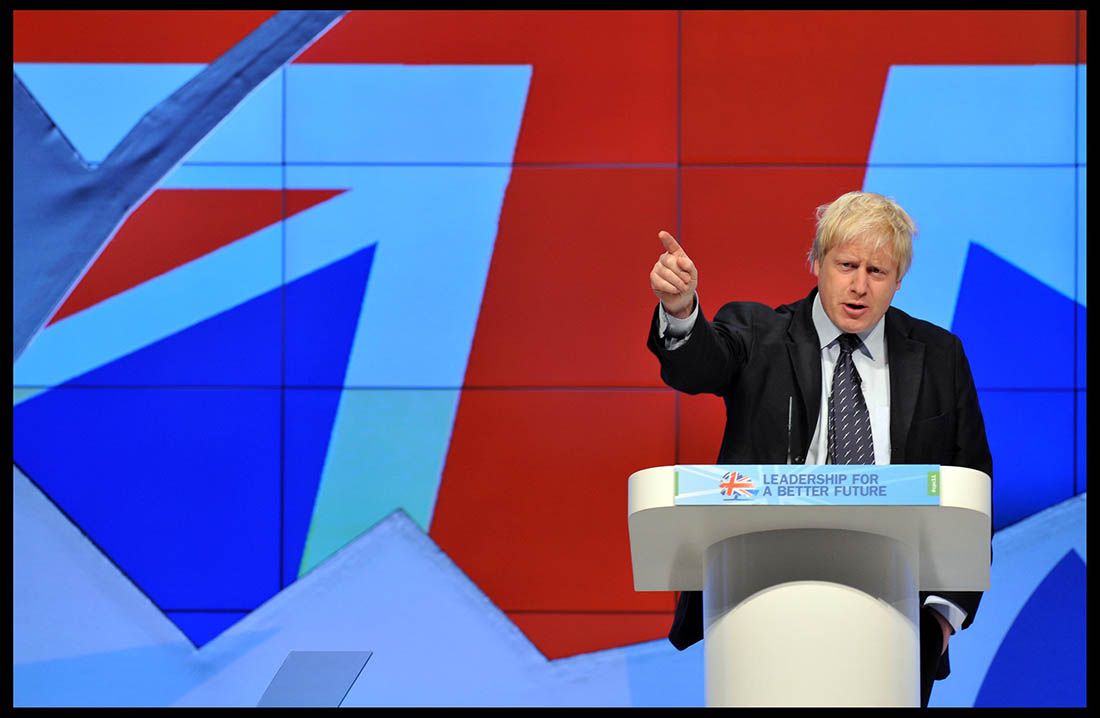 Analysts at two of world's major investment banks are saying the British currency has fallen far enough for the timebeing, while one suggests it could even be due a modest recovery.

Pound Sterling has seen its fortune turn for the worse in spectacular fashion during recent months, with losses intensifying since the middle of last month when Prime Minister Theresa May announced her intention to resign.

The British currency has now handed back to the Dollar what was, in February, a five percent gain for 2019 and its also whittled a near-four percent gain over the struggling Euro down to just a 0.68% increase. Sterling was trading at just 1.2564 against the Dollar late Monday and 1.1187 against the Euro.

"Markets were pricing in a close to 50% chance of a no-deal Brexit at the end of October when they recently pushed EURGBP higher to 0.89. We think this is overdone," says Daniel Trum, a strategist in the chief investment office of UBS, referring to a recent fall by the Pound-to-Euro rate below the 1.1235 level.

Concerns that a Brexit-supporting MP will soon be installed in 10 Downing Street as Prime Minister have been behind the rout, because it's feared such a leader will opt for a 'no deal' Brexit in October if faced with continued refusal by the European Union to remove the so-called Northern Irish backstop from the EU withdrawal agreement.

Parliament has rejected the new treaty, which the EU says is the only deal available, on three occasions. But most analysts are still saying a 'no deal' Brexit, which many economists say would hurt growth in the short and long-term, remains unlikely because of parliamentary oppposition to it.

Many claim that a general election is now likely, although they differ in their expectations of the timing and consequences of one happening.

UBS is one of those looking for a national poll to be called.

"Lingering uncertainty should keep the exchange rate range-bound between 0.84 and 0.90, creating buying and selling opportunities when it is close to the edges of that range," Trum says, suggesting the Pound-to-Euro rate should trade between 1.11 and 1.19 over the next 12 months.

Trum's forecast implies Sterling is already at the bottom of its likely 12-month range and that there could be nearly 6% upside to the Pound-to-Euro rate over the coming months. But given the Conservative Party leadership election is now in full flow, with the second round of voting beginning Tuesday, a catalyst for gains remains elusive.

The Swiss bank could have a point about a general election being likely if odds quoted by major bookmakers are anything to go by. Pound Sterling Live reported Monday how those odds now reflect a 63% probability of a nation poll being called before the year is out.

"Since early May we have been GBP bears, arguing that the correct range for GBPUSD was 1.25-28 and that EURGBP could rally to 0.8850 or above," says Shahab Jalinoos, head of FX strategy at Credit Suisse. "We reduce materially our GBP bearishness to holding a small notional short vs EUR and GBP as opposed to a whole-hearted large positon."

Jalinoos has cut back the size of his bet against the Pound in the last week because it's fallen far enough against the Euro and Dollar for the timebeing, he says, although the strategist still has a small wager against the British currency. His thinking on this is that Boris Johnson, former foreign secretary and frontrunner in the Conservative Party leadership campaign, could pursue a 'no deal' Brexit.

Johnson, who led one of the Brexit-supporting referendum campaigns, is running a country mile ahead of his nearest rivals. He's told  other MPs he intends to renegotiate Theresa May's withdrawal agreement with a view to having the EU drop its insistence on the 'Northern Irish backstop', but has also said he'll take the UK out of the EU without any kind of agreement if it refuses.

"Assuming he is true to his word (admittedly not guaranteed) the risks are high that the EU will feel sufficiently antagonized as to not agree to an extension even if it were asked for one, possibly delivering the Conservatives the excuse they need to blame the failure of talks on the 'foreigners'," Jalinoos says. "Not wanting to miss a possible extreme breakdown entirely, we prefer to keep some skin in the short GBP game, even if in reduced form." 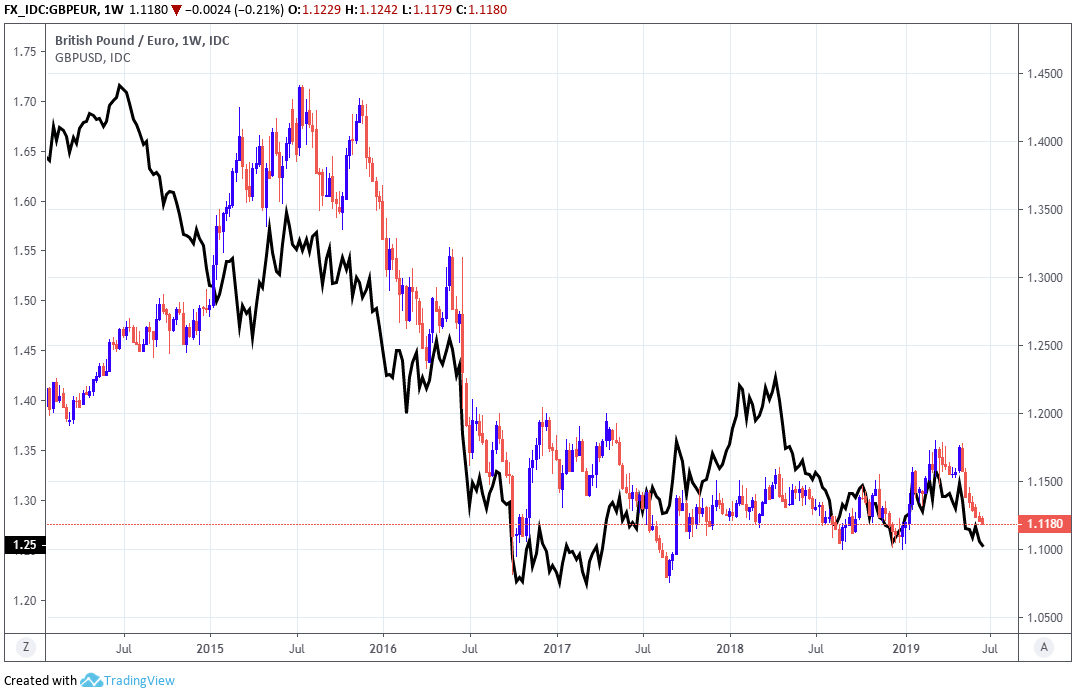 The backstop is a convoluted mechanism that ultimately ensures the UK remains subject to EU trade policy and some laws unless and until the UK can satisfy Brussels that any other future relationship would not compromise the open border between Northern Ireland and Ireland. It's the most the contentious feature of the agreement and was previously described by Johnson as imposing a form of "vassalage" upon the UK.

This is why markets are frightened of a Prime Minister Boris Johnson, but the modern Conservative Party stalwart would likely face cries of illegitimate action from a heavily remain-supporting parliament in the event of an attempt to pursue a 'no deal' Brexit, which could mean he feels it's necessary to seek a new mandate from the electorate before going ahead. UBS' Trum says this is exactly what will happen.

"We expect Brexit uncertainty to linger and to keep EURGBP trading in a volatile manner. But our base case is a further extension of the October deadline and eventually general elections in the UK. This should keep the exchange rate in a range around 0.87 over the next 12 months," Trum writes, in a note to clients Monday.

Trum's forecast is for the Pound-to-Euro rate to average 1.1494 over the next 12 months, with a 3% variance either side of that level, although he warns that it could fall as low as 1.0309 in the event that a 'no deal' Brexit happens. Credit Suisse's Jalinoos is still betting against the Pound.

"Market concerns about no-deal Brexit risk by October are overdone," Trump writes. "A reversal of this and fading dollar attractiveness should lead to a rebound of GBPUSD. With the Fed and BoE on hold, the focus remains mostly on politics. Lingering Brexit uncertainty will likely curb sterling's upside potential in the high 1.30s."