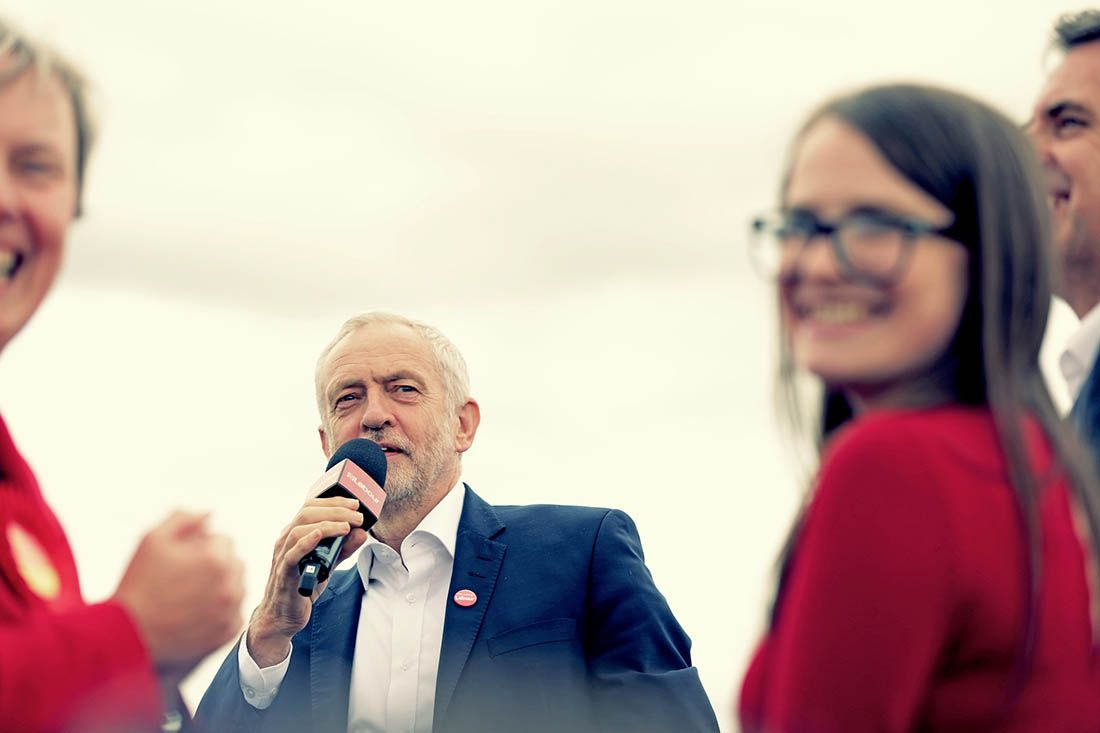 The British Pound was the best performing global currency at the turn of the month with a sizeable 0.80% advance being recorded against the U.S. Dollar that saw the GBP/USD exchange rate move above 1.30 once more.

The Pound-to-Euro exchange rate meanwhile broke out of the late 1.15s region and traded above 1.16 again for the first time since April 10.

Markets appear to have bought Sterling on a report in The Times detailing "substantive" moves in the Brexit talks between the Conservatives and Labour aimed at breaking the deadlock in parliament over Theresa May’s deal, it was claimed yesterday.

"For the first time in four weeks of negotiations senior Labour sources said that the government side appeared to have shifted its position on the party’s key demands around a closer customs union with the European Union after Brexit. There is also understood to have been some progress over incorporating a revised political declaration with the EU in UK legislation that will be needed to implement Brexit," says Oliver Wright, Policy Editor at The Times.

May's defacto deputy, David Lidington, meanwhile said this week's meeting had been "productive" and "positive", saying that both sides seemed to "want to make progress" that would require "flexibility and compromise".

We said in an article published on Monday that the main upside risk to Sterling this week was a breakthrough in cross-party talks as this could go some way in opening a path towards a Brexit deal finally being ratified, which would put an end to months of uncertainty.

While a deal is still yet to come, the tone of the updates are more encouraging than those seen last week when talks were reportedly close to collapse and suggest a breakthrough might be imminent.

“There wasn’t complete movement but there was movement,” a Labour source told The Times. “The talks felt different and more substantive in a way that they didn’t last week.”

Following the news, the Pound was quoted higher against all nine currencies that make up the group-of-ten basket of the world's largest freely-traded currencies.

"Sterling rose to one-week highs as the Dollar continued to consolidate a rally that hoisted it to 2019 peaks. The latest round of Brexit negotiations are underway and reportedly off to a constructive start, another factor supporting the Pound," says Joe Manimbo, a foreign exchange strategist with Western Union. 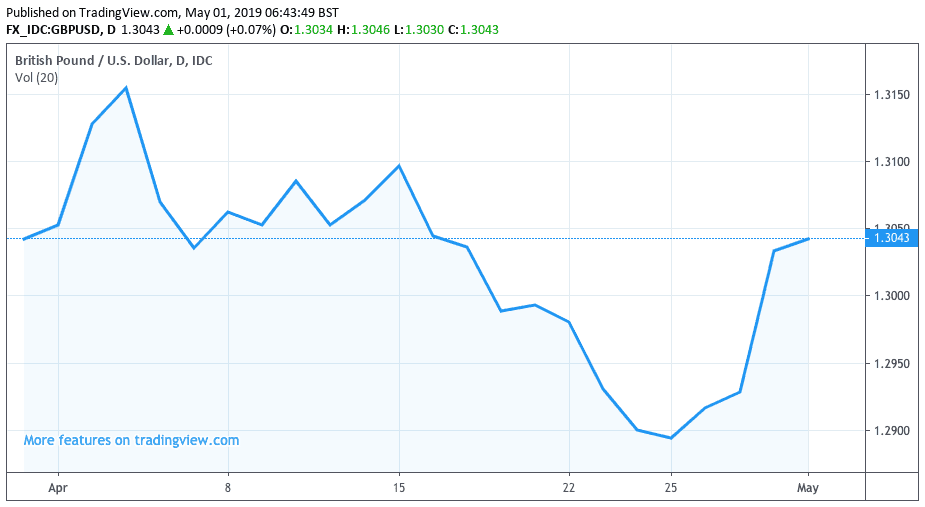 Above: Sterling's performance against the Dollar during April.

Opening the door to a potential cross-party deal was Labour's decision to keep its current manifesto on Brexit unchanged.

Labour's National Executive Committee (NEC) opted to maintain the party's  committment to pursuing an "alternative plan" for Brexit, and if the necessary changes to the government’s deal can't be sought or a general election triggered, the party will support a new public vote.

The decision to not change the manifesto in favour of prioritising a new vote for the upcoming European elections has angered the party's membership who want a second referendum.

However, had the party opted to back a second referendum and dropped a committment to securing changes to the Brexit deal the cross-party Brexit talks would have been effectively killed off.

The talks have life in them yet, and the British Pound likes this. 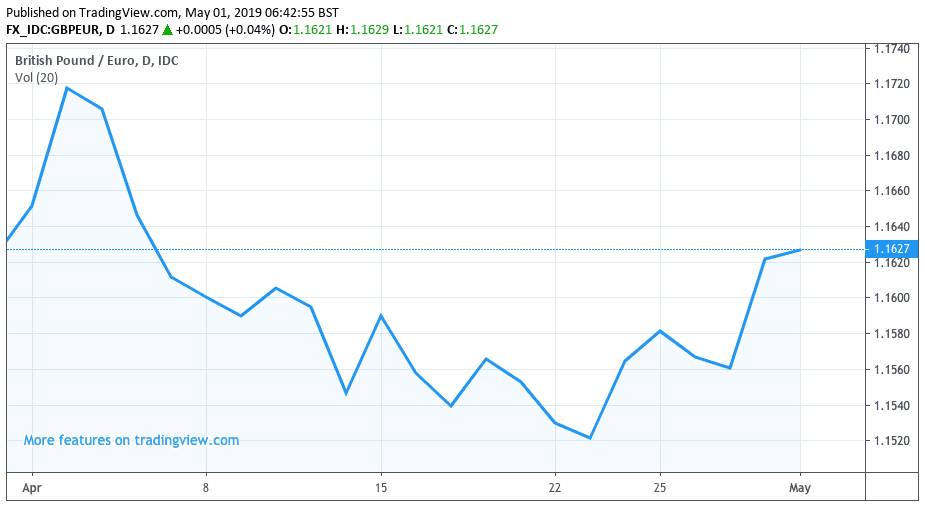 Above: The Pound's performance against the Euro in April.

The advance in the Pound comes as markets opted to set aside news Prime Minister Theresa May is to appear before an Emergency General Meeting (EGM) of all 800 Conservative constituency chairs and senior activists in June, who will decide whether to demand her resignation for failing to deliver Brexit.

May was on Monday night informed that the threshold for a petition to call the EGM has been passed. A total of 70 constituency chairmen have signed a petition to demand an EGM for a vote on May’s leadership which means the 10% threshold had been breached.

The news confirms to us the prospect of a change in Prime Minister over the summer period is elevated, and therefore so is politically-induced volatility in the Pound.

"May is still under pressure to pass her deal, however, we don’t see a breakthrough anytime soon. Instead, we expect May to be ousted over the summer, leading to another extension beyond October 31. This postpones a BoE hike and should weigh on GBP," says Morten Lund at Nordea Markets.

Two political triggers to watch which could hasten a leadership change over the summer period are the local government elections scheduled for Thursday, May 2 and the European elections on May 26.

A hefty defeat in both could well see the Conservatives heap the pressure on May to leave office.

If May steps down, the UK will enter into a prolonged period of potential uncertainty that could well see a Brexiteer replace her at the helm of the Conservatives and the country.